Possible WIX failure?!? What could have happened?

My sister came over Friday so I could check her oil. I have to check every 1,000 miles or so because it has a long history of burning and a little leaking (Honda K24). She can barely be bothered to even bring it to me for 5 minutes, much less check it herself. She pulls it into my garage and proceeds to tell me how she started her car on her lunch and noticed her oil light was flashing, and thought nothing of it because she was coming over later that day anyway

(oh boy, I'm worried). She then proceeded to drive to two different places, then returned to work and ran the car until her lunch break was over (now I'm cringing). When she left, she said the light didn't return. She drove about 20 miles to my house (now I'm just scared). So I immediately raise the hood and check the level. Bone dry. So I added a quart of oil for insurance, set my ramps up, started it and quickly drove it up and shut it off. I proceed to crawl under, and there's oil everywhere. There was previously a tiny leak coming from between the motor and trans (main?), but nothing remotely close to this. The entire underside was soaked in fresh oil. The passenger control arm was soaked completely. The inner sidewall of the RF tire was soaked too. Long story short, it appears to have come from the oil filter. It started there and flowed every direction gravity/wind could pull it. It even appeared to defy gravity a bit by spattering/spraying upward, but it definitely wasn't leaking from above. So I instantly started blaming myself. Did I double gasket it? Did I not tighten it enough? Well, instead of just changing the filter, she opted to do a full change. So I was able to find out. No, and no. Perfectly tight (aka not gorilla lube-tech tight), and one gasket. So that's out. And I know what's going to be asked, so what "perfectly tight" means is spinning it on until it touches and stops, then usually one full turn which is about as tight as I can turn it without really straining. Sometimes it'll only go 7/8 or 3/4 of a turn, but never less than 3/4. Surprisingly, I actually had to get out the band wrench to get it off, so yes, it was plenty tight. There was no damage on the outside of the filter, and once removed, nothing obvious inside either. Gasket did not look pinched/warped/bloated. Just nothing. Looked like new. Surprisingly, roughly 3 quarts drained out of the sump (so it retained 2 out of 4.5, plus the quart I added). That was a sigh of relief. Looked like 1500 mile oil should in a HM engine, no metal flakes. As for the details, it's an 07 Accord 2.4, 214K. Oil filter was installed 9/17 and had about 1,500 miles on it. Oil was Mobil Super HM 5W-20. With that mileage, of course it sees plenty of highway driving (>80%), but it does get idled frequently too. Unfortunately, it's also at the mercy of a lead-foot owner. Temperature this last week has been fairly nice, roughly 60-80Â°, with the exception of record cold on Thursday and Friday mornings (35 & 32Â°). But by the time her lunch came around it was in the 60s. What could have gone wrong? I understand literally anything man-made can fail, but I have a hard time believing a WIX would. And if it looks perfectly fine, how did it fail? My theories: the gasket itself somehow leaked (highly doubt it), the bypass valve somehow failed and allowed too much pressure (maybe), or [wildcard] the oil pump went ballistic and forced too much pressure through it (maybe...?). I really don't know. I'm really weirded out at the problem disappearing on her drive home. I'm at a loss, but I am definitely cracking this filter open for answers, and will keep this thread updated. What do the BITOG gods have to say? Pics below. My S9 camera makes the underside of the car look WAY cleaner than it actually was... Most likely the base seam crimp leaked. Not the first time a Wix leaked at that point was reported on BITOG.
B

My guess is the oil pressure relief valve is stuck closed. I can't say I've heard of this happening but it seems to fit.
L

What's up with the badly drilled(?) hole and the tears(?) on the formed edges there? 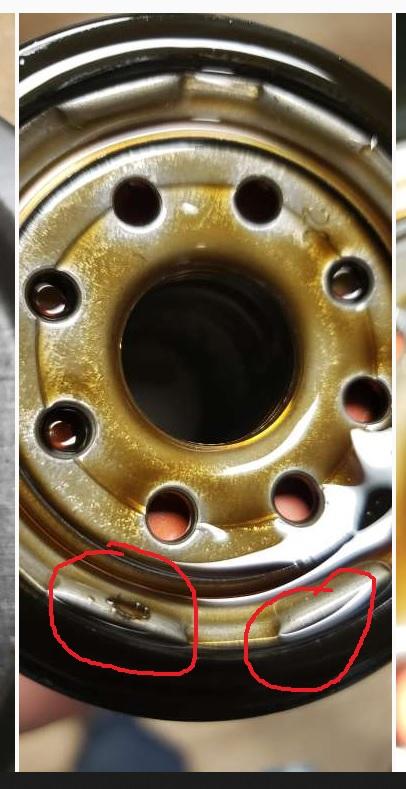 Originally Posted by LvR
What's up with the badly drilled(?) hole and the tears(?) on the formed edges there?

I think you have spotted the problem.
T

Not so sure I would have missed something that obvious. I took several pictures that showed things that weren't really there. I'll take a close second look there tomorrow when I go back out there. Interesting though.
C

'The Oil light came on and I kept going' Yep, that will make your heart drop to the basement. I had a long talk with my wife and kid about that after the wife ran her 2000 Accord without oil for about 20 miles. 'If you don't stop right then and call me, you will be walking everywhere because you're going to blow it up and I'm not buying another one'
B

That was a major leak. It would have been worth whatever amount it took to fill it, and start it while you checked underneath while it was running. Seeing as it was leaking that much, it could have been easily spotted. Next time go with a Fram.

I would be calling Wix alerting them to the problem, and looking for compensation. At the very least they should be paying you for the oil and filter, or more depending on how you play it. Diagnostic time and cleaning up the mess including the oil leak onto your driveway, etc. isn't unreasonable imo. That's assuming there's no engine damage, which would be an entirely different and more expensive claim.
E

I think you have spotted the problem.
somebody took it out of the box at the store and dropped it? or a manufacturing/handling error
C

One of the reasons I don't like the cover under our fusion that you remove to change the oil, you wouldn't see a drip from a leak. Of course I switched over to Wix filters recently so even though the OP's situation is probably a fluke deal I'll still be wondering about our ride.
A

I had Wix leak on subaru EJ253. I blame the flat gasket that distorted when tightened. Then I went to filters with P gasket - no leaks ever again. ________ Tony 1679 I wish you wiped the oil off the filter before you photographed it! But send pix to Wix. You will at least get a free filter. Maybe a dozen

I recently had the same experience on my 14'F150 with a RA champion filter. No visible sign of failure. I caught it early so no problem. I thought about the crimp around the base plate too???
F

How did the oil get above the filter on the mount? You should find out soon if the new filter changes the situation. She had too low oil pressure at one point. If the seam isn't visibly distorted it is pretty leak proof. This isn't Wix's first rodeo on filter making.even if half a dozen people guess the seam failed with no real evidence. One of the can flutes does look creased hard in the photo maybe it's illusion.
N

If as LvR pointed out that is a hole on that formed edge, wouldn't the oil pressure go right against the side of the gasket and push on the gasket laterally? I could picture that causing a leak eventually. Then again Wix filters have been reported to loosen slightly and leak or leak at the crimp. I always get nervous using them just because of the weird complains I've heard about them leaking...
M

That looks like a factory defect. I always check the filter construction for external defects before I buy them. It is a pain to get in the middle of an oil change to find out you have a faulty filter.
D

XP version of same Wix filter on a Honda K24. Same issue that developed after it was on the car for 2k or so. Needless to say, I'm off the Wix bandwagon.
N

Give Wix a call and send that filter back to them for a post-mortem. Then keep an eye on that car for the next few thousand miles. Now I'm leery about Wix. I've used them on and off.
You must log in or register to reply here.

Nissan Cube No Oil on Dipstick
2