Originally Posted By: 4WD
We have been warned not touch this 10w-30: 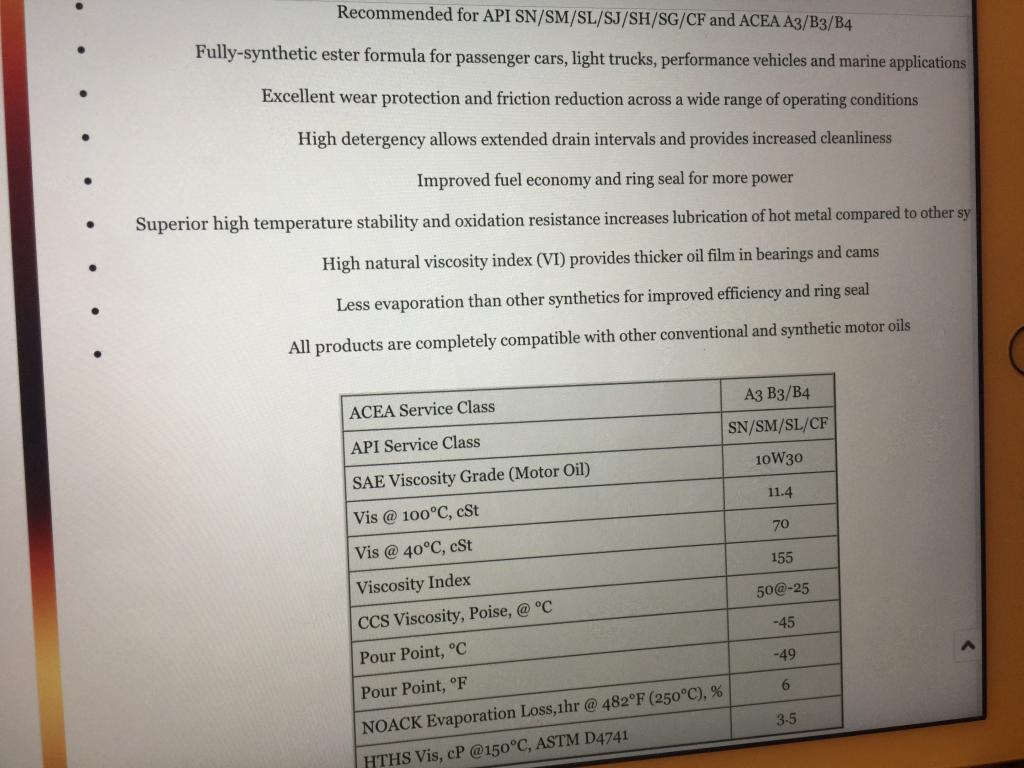 What oil is this?

Above oil w the 6 NOACK is Redline - here's the full list: http://www.airnshox.com/en/files/RL-OLJA-MOTO-IN-AVTO-ENG.pdf
P

Originally Posted By: TheKracken
Originally Posted By: Gokhan
Originally Posted By: TheKracken
Do 5w20's have great base oils as well? I will be running PUP 5w20 in everything here soon.
5W-20s are listed in the second table in the original post. M1 AFE 0W-20 has the best base oil among tested xW-20 oils. It's similar to Amsoil Signature Series 0W-20 in base-oil quality. So, if you want to go with the best base-oil quality, you should go with M1 AFE 0W-20 or perhaps M1 EP 0W-20, not the PP/PUP and not a 5W-20. This said, I use TGMO 0W-20 SN. However, there is no test data on it.
I have 12 jugs of the 5w20 PUP, I might have to consider sending them back....though base oil isnt everything, it is additives as well. Like you, I am a thin oil guy.
While this BOQI may have some merit....I certainly wouldn't be returning PUP to use an oil with a higher BOQI number. I'm sure that any name brand synthetic will keep your engine purring for a long, long time regardless of the BOQI # on this list.......base oil is only part of the equation that makes for a good oil....
M

edit: Just noticed this was run with specs from the PDF that are slightly different to the ones pictured. Most notably: HTHS Vis, cP @150°C=3.8

We are witnessing the birth of 760 Mouse.

Originally Posted By: 4WD
We have been warned not touch this 10w-30:

Originally Posted By: rubberchicken
You said " (2) 2014 Mobil 1 AFE 0W-20 is the now all-time BOQI champion, easily beating the old, discontinued Pennzoil Ultra. The current formulation is still excellent. However, the base-oil quality of M1 AFE 0W-20 seems to be going down every year, meaning they are putting less and less PAO in it every year.". I just bought a batch of PUP 0w-20 from Amazon, although yet to be delivered. On the Pennz website it is still listed as an active product. What product was discontinued ?
Originally Posted By: TheKracken
I have 12 jugs of the 5w20 PUP, I might have to consider sending them back....though base oil isnt everything, it is additives as well. Like you, I am a thin oil guy.
Oh, no!

is BOQI a real index used by some automotive society or you just made it up?

Gokhan, thanks for all the effort, it's a great read. I wonder where he oddballs, Edge 0W-30 and Mobil 1 AFE 0W-30 would fall in this list. Just thinking out loud.

Originally Posted By: wemay
Gokhan, thanks for all the effort, it's a great read. I wonder where he oddballs, Edge 0W-30 and Mobil 1 AFE 0W-30 would fall in this list. Just thinking out loud.
You're welcome! I think the best thing about the BOQI is that it is shedding great insight into what is actually in the bottle (Group I, II, II+, III, III+, GTL, or PAO) rather than trying to infer this through marketing gimmicks and relying on oil myths on base-oil quality. I've learned that, despite often having low NOACK, 10W-30 oils tend to be made from inferior base stocks as they don't need to perform well in cold temperatures. I've also learned that 0W-20 oils tend to use better base stocks than 5W-20 or 5W-30 do, as they need to perform better in cold temperatures. Another take was that GTL, while better than Group III/III+, is not as good as PAO. And how about the Pennzoil Ultra Platinum having a base oil significantly inferior to Pennzoil Platinum's (both with PurePlus), despite being marketed as their ultimate-quality oil? As I explained in the original BOQI thread (linked in the original post), this idea of using both CCS and NOACK first came through Chevron/Oronite, when they were investigating base-oil quality. However, the formulas with the particular choice of scaling factors belong to me. I don't know if Chevron/Oronite derived their own formulas, perhaps even more complicated ones. There is no test data on M1 AFE 0W-30. However, its MRV is inferior to M1 AFE 0W-20's. Perhaps its MSDS can shed light into its PAO content. Good luck finding any data on any Castrol product.
A

Or it may be that Chevron, including their Oronite unit came up with their presentation based upon basestocks and add packs readily available to them and probably made by them at commercially viable prices. It's a little misleading to consider all basestocks within any given recognized group as fungible. They aren't. It may be that your two variable BOQI idea is based upon a flawed set of assumptions. Using but two variables to determine the basestock quality of a finished oil seems a little simplistic to me, particularly since some known-good oils score quite low in the index you've modeled. I'd like to believe that things could be so simple, but this may not be the case.

If you hear a knock at your door, it might be a pair of lawyers from SOPUS. Going around calling products inferior in public has consequences sometimes.
M

Originally Posted By: Astro_Guy
Where is Mobil 1 0w20 EP?
There is no test data on M1 EP and M1 AP unfortunately.
R

Originally Posted By: Gokhan
Pennzoil Ultra Platinum is a scam! It's not that it's a bad oil but it's actually inferior to Pennzoil Platinum and yet you are being charged twice as much. You have been scammed by a marketing gimmick, ripped off, and robbed. It's darn right that you should return them!
That's not the definition of a scam, I don't think you know what you're talking about. Nowhere have I seen Pennzoil make a factually inaccurate claim. I've seen them say the oil is high quality, uses PurePlus technology and the base stock is cleaner as a result. I don't remember them insulting your BOQI by claiming their GTL base has a superior BOQI to anything on the market. I do remember them saying their oil taken together as a whole with their additives results in cleaner engines though. If you have no proof that any of that is false, I don't see how you can claim anyone is being ripped off and robbed. They're marketing what they're selling anything could be considered a gimmick. DNewton said it best in the other thread, I fail to see how this has any real world impact, nor do I see any accounting for add packs and the like when you make accusations like that. In the real world with two normally performing engines, is any of this going to matter? Enough to resort to hysterics and say people have been scammed, ripped off and robbed and should go and return their oil? I also don't know where you're getting your prices from. I got my bottles of PuP 0W-20 for $4.82 a quart without the rebate from Walmart.com, that's $2.82 a quart with the rebate. I can't even begin to find Mobil 1 at that price. Would anyone fork over $2.82 for this?:
Quote:
Combining innovation and technology, we start with something different: natural gas. PurePlus® Technology is a patented, revolutionary process that converts pure natural gas into high-quality, full synthetic base oil used in the Pennzoil Platinum® line of lubricants. Because our base oil is made from natural gas, it's crystal clear, with fewer of the impurities found in crude oil—the start for many other traditional and synthetic motor oils. To that pure, clear base, we add our unique high performance additives to create Pennzoil Platinum® and Pennzoil Ultra Platinum™ Full Synthetic Motor Oils, our most modern and innovative synthetic oils.
I know I would and so do others. Marketing gimmick? I like what they're selling and I'll pay for it. Just like I like Mobil 1 and pay for it. I don't see any gimmicks here, nor do I see a scam, rip-off or robbery in progress, I'm getting exactly what I paid for. Even if they charged $15.00 a quart, just because it scores lower on a BOQI index doesn't mean it's a scam or anyone's getting ripped off if they don't care about the BOQI index, they're paying for it and they're getting exactly what Pennzoil says they're giving them. What to know an example of a scam? If Pennzoil claimed it was GTL, put it in all of their marketing and brochures but it turned out it wasn't. That's a scam.
G

Originally Posted By: Gokhan
Pennzoil Ultra Platinum is a scam! It's not that it's a bad oil but it's actually inferior to Pennzoil Platinum and yet you are being charged twice as much.
Twice as much? Show me, and not at an Amazon Canada site that will sell the stuff for, I kid you not, over $100 a jug, either. I mean a place where you or I might actually buy oil. $51.69 is hogwash. That's a Canadian Tire regular price, and $31.90 PP would be a big CT sale. If both are at regular price or if both are on sale, they're separated by like $4.

Originally Posted By: Leonardo629
is BOQI a real index used by some automotive society or you just made it up?
Simply made up....
You must log in or register to reply here.

Which oil for HONDA D engine?
2