The fast rust bluing/hot water bluing did not degrade the markings on my pistol. And you do not need a cabinet to do it, just a heat gun. Heat the metal, swab on the fluid and it flash rusts. You boil it, card it, and repeat until you get the finish you want. Then just neutralize the parts in a solution of water and baking soda. Take them out, dry them and oil them. Wait a day or two and then you reassemble. It is still a rust blue, just an express version.
H

Thanks for the continuing comments. I've made some progress on the gun, though I consider most of what I've done prerequisite to further effort. I've decided that if I can't get parts for it or don't feel that I can get it to run at all, I'd just protect what's there and set it up as an heirloom. But if I CAN get parts for it and think I can get it to run, I'd put more time and money into it. The first step was getting everything completely broken down and stripped. The receiver is refreshingly simple: 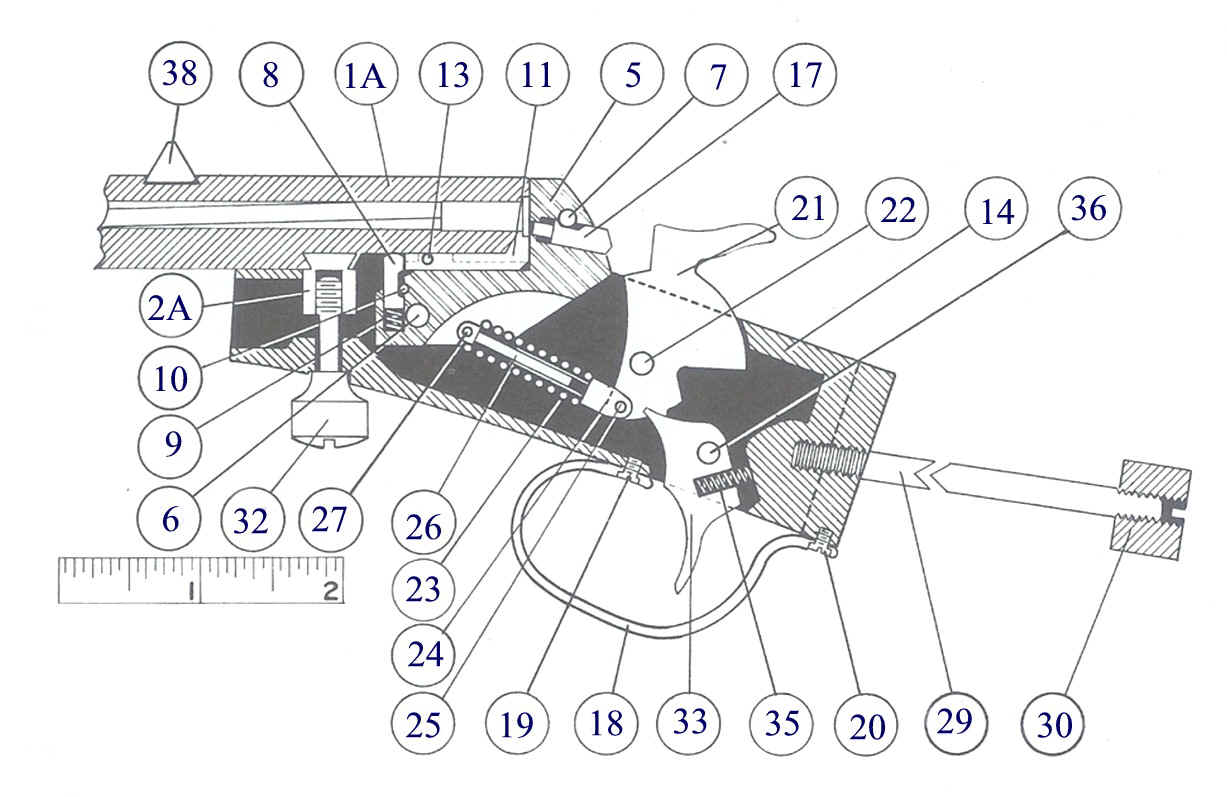 The rolling block (5) pivots on its pin (6). The hammer (21) pivots on its pin (22). The trigger (33) pivots on its pin (36). The mainspring and strut (23 and 26) keep the hammer tensioned and the trigger spring (35) keeps the trigger doing what it should. All of the pins (which are really machine screws) were frozen. With the receiver in a vice and some light action with my cordless impact gun, the trigger and hammer pins zipped right out. The rolling block pin was plain stuck. It wasn't stuck in the threads of the receiver, but it was stuck in the block itself. So it would turn only as far as the rolling block would let it. I worked on that for about 2 hours. I eventually got it out...to find that the pin was cracked down most of its length. I feel very lucky to have gotten that out. I'd have really hated to try to drill it out. But anyway, it's all apart. Missing pieces: firing pin (17), mainspring and strut (23 and 26), and trigger spring (35). I can get the firing pin from Numrich. The others will have to be procured from eBay or Gunbroker or I'll have to have a local 'smith fab something up. Also missing is the takedown bolt (32). This one is interesting (and the part is completely unavailable anywhere). There is a threaded lug (2A) that's dovetailed into to the barrel...and that mates with a hole in the top of the receiver. Put the two together and tighten the screw, and the gun is assembled. My receiver had threads in it where the takedown bolt would pass through...which does not show on the drawing, and doesn't make a whole lot of sense. Why would both the receiver and the barrel lug be threaded? You wouldn't be able to get a precise fit if both were threaded. So I moved on. My next step was finding the thread pitch so I can get a rolling block pin. The small parts like this appear to simply not exist, so I was going to have to come up with something myself. After some trial and error at Lowe's over the weekend, I find that the threads are #10-24. I found some 3/4" long socket head screws that looked like they'd work a treat. I bought some of those as well as a #10-24 tap to chase the threads. Those socket head screws worked out very well; 3/4" was the perfect length and now I've got two secure pins for the rolling block and the hammer. It certainly doesn't look exactly period correct, but I'll cross that bridge later if I decide to fully restore it (not terribly likely). The trigger pin is a smaller thread, but its pin is still fine, so I'll keep it. I wasn't sure of the threads on the back of the receiver, where the stock stud (29) screws in. They seemed smaller than the #10-24 threads, and I had prepared myself to drill the hole and tap to #10-24, but I chased the threads first, and that's indeed what it is already. Nice. So I'll get a length of threaded rod and look at my stock options this week...how to attach that without messing it up. So...back to the takedown bolt. If I can't get this sorted, I can't use the gun. And the bolt is apparently just not available. I've seen posts on forums saying people have been searching for years for these. Yikes. And I can't figure out why my receiver is threaded along with the barrel lug. I cleaned out the barrel lug threads (also #10-24) and had to cut one of my socket head screws down about 1/8" so it wouldn't bottom in the lug once assembled. Try as I might, the barrel and receiver just would not screw together without at least some wobble between them. So I modified my original receiver. Yep, I drilled out the threads to make it a smooth through-hole. And actually, it now matches all of the parts drawings that I can find...it should be a smooth hole. And finally...success...I can assemble the barrel to the receiver and it's a perfect (and tight) fit. It looks like I'm going to be able to get this gun going. I'm going to order the firing pin from Numrich and will be looking at having a local 'smith make me a mainspring and strut and a small trigger spring. I will post some pictures this evening. It's coming together well.

How to clean your (Hustler) ZT-2800s inside and out - a newbie's guide step-by-step.

When big, dumb, and slow is a good thing
2