Evening folks! So I've been on the hunt for something to go back and fourth to work as it's about 60 miles both ways. Been putting too many miles on the Tacoma and Camry so I've been on the lookout for something cheap, gets decent fuel mileage, and a manual transmission. Thought I was going to get my co-workers Subaru, but that didn't pan out too well. My other coworker's wife has been looking to sell her car. Ironically she is the mother of a high school friend. This car was part of my teenage years, I even helped put the engine in it back in 2006. It's a little rough, has well over 200K, has some "ricer" mods, but shifts, drives, and runs well! Let me introduce you to my '95 Eagle Talon ESi, non turbo, FWD. 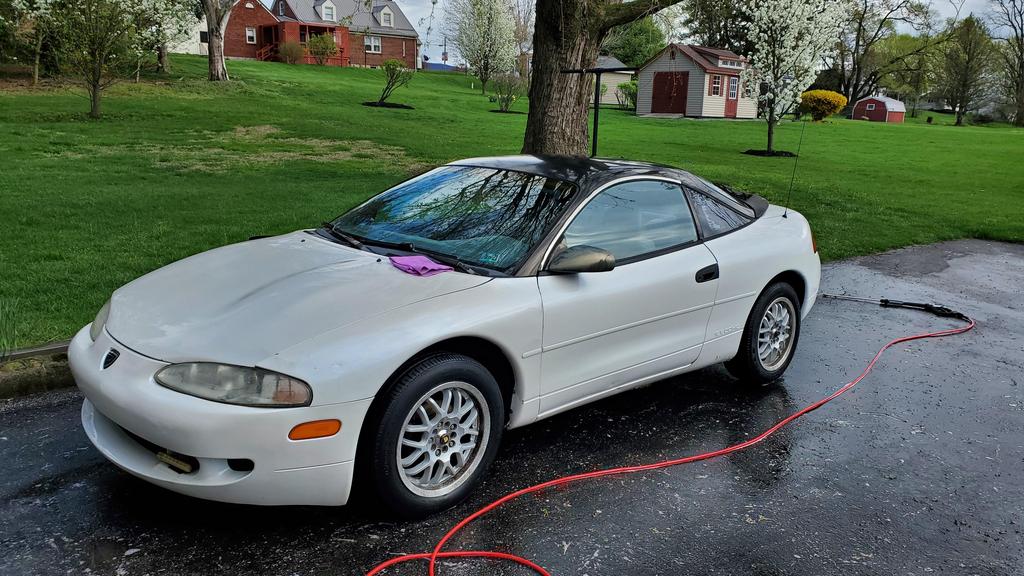 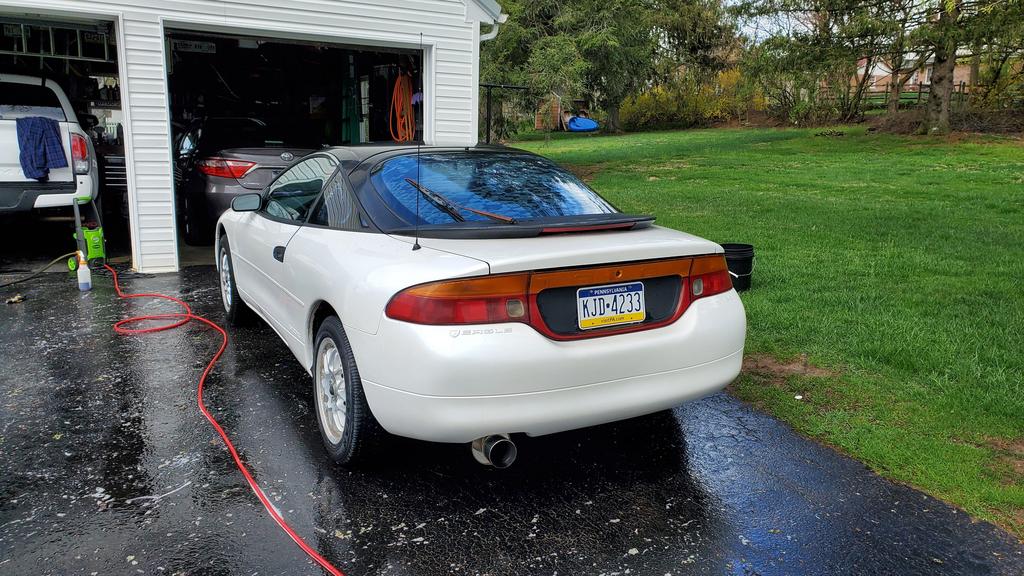 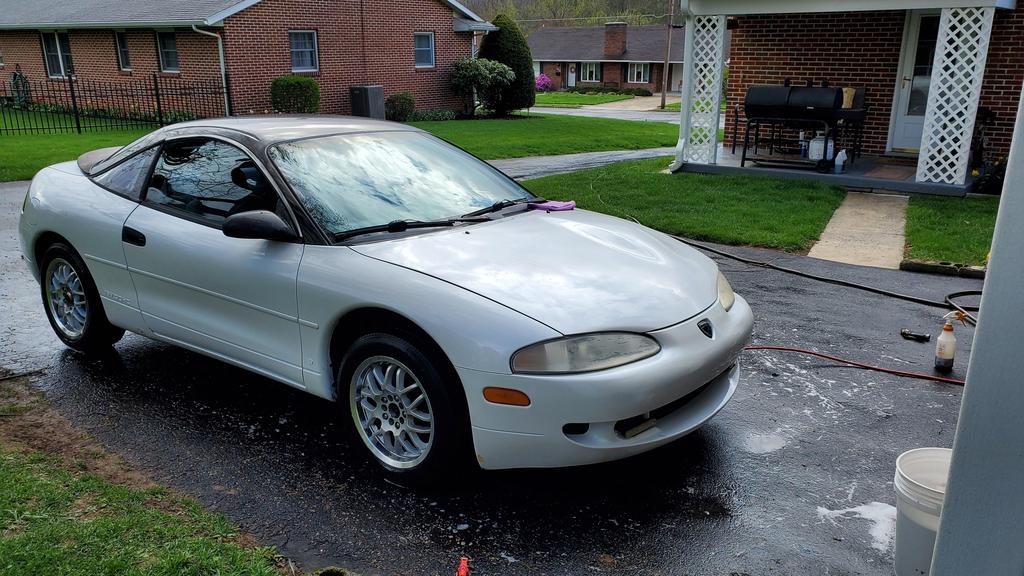 It's a little ugly, but cleans up well. It needs rocker repair, but that's par for the course in PA. The interior is very dirty, but not ripped or torn up besides the headliner being ripped out. 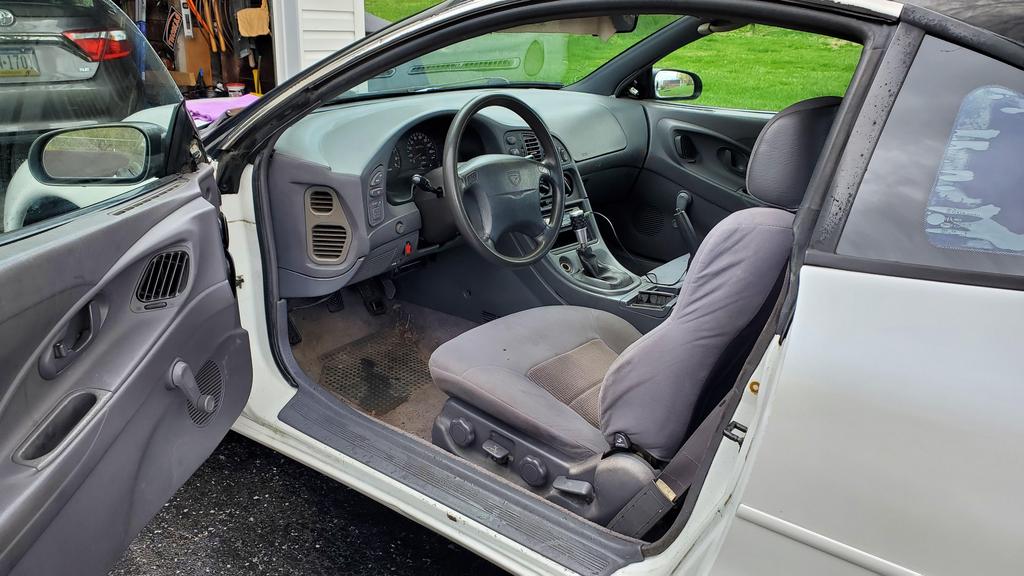 Under the hood is the DOHC 2.0 Chrysler unit. It's dirty and has some sort of makeshift cold air intake, but I can clean it up. 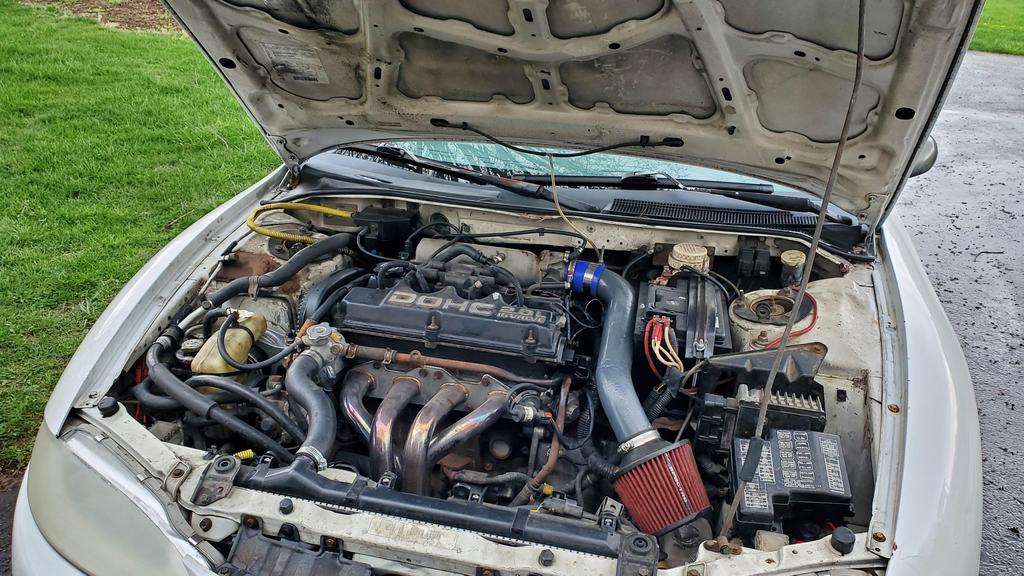 It immediately needs a set of tires as the rear tires are date coded 2009 and the fronts 2015. Yes it seems I'm a little crazy for having something this old as a work beater, but the price was right and it runs well. It does have the standard "racecar" stainless exhaust. A little obnoxious, but it's all new so I'll just have to rock it for a while... If it turns out to be a somewhat reliable vehicle it'll most likely get a nice budget paint job. It's a 50 footer right now. Timing belt is new so that's out of the way. The transmission has been replaced (replaced with a more reliable '97 unit) and stage 2 clutch installed, so that is done as well.
M

Basically a Mitsubishi Eclipse. It should serve its purpose.

For a split second I thought you’re talking about the Delta airlines here Nice car! Gives me Fast and Furious memories

Yea it has that boy racer feel to it, the exhaust did a nice loud "pop!" in the driveway and scared the heck outta my poor mother. The drone up and down the mountain is deafening. I'm not completely fond of it, but there's other things that are a priority. The thing that has shocked me about this car is with as many miles as it has the steering is nice, tight, and strait. Suspension also feels decent.
S

Walmart tle has a headlight polishing service that they do for you priced @$30. Looks good Delta!

Those were neat cars. You got a pretty simple one, no turbo, no AWD.

1995 isn’t that old in the big scheme of things. Looks like a decent beater. Baseline all fluids and run it!
S

Will that exhaust pass PA inspection, I thought they were cracking down on that, but I guess the previous owner got through it, find out what inspection station they used.

Yay, Delta finally buys something old lol. Honestly I don’t ever see these anymore ever.

samven said:
Will that exhaust pass PA inspection, I thought they were cracking down on that, but I guess the previous owner got through it, find out what inspection station they used.
Click to expand...

As long as everything is there, or looks like it's there it should. There's so many cars with loud mufflers around here, that and my county doesn't do emissions. Gonna try and do the right thing and get it to pass myself, but if not I'll have to get their old shop to do it. Nothing other than a hole in one of the rockers should stop it. Gonna get front and rear brakes before I really get it on the road. They stop it, but any little heat in them and it shakes. It definitely had been sitting at one point. The engine runs pretty well, despite a little puff of smoke going back on the throttle after coming down the mountain. That's to be expected honestly. The engine has about 160K on it and the trans 150K.

Looks pretty decent. One of the last ones that hasn't received the full rice treatment. I guess the lack of a turbo saved it from that fate.

Thanks for providing me with one of my 'firsts'. I've never seen one of these cars with crank windows. Didn't know they existed.

Interesting that its survived in PA for that long. Reminds me of back in the early 90's my buddies Dad got a Plymouth Laser! With popup headlights, pretty cool car at the time when we had a 1985 carb'd Corolla. Hopefully it runs well for you.

Figure I'd atleast share how the headlights cleaned up. 1 pass heavy/medium polish, and 1 cleanup pass with a light compound. 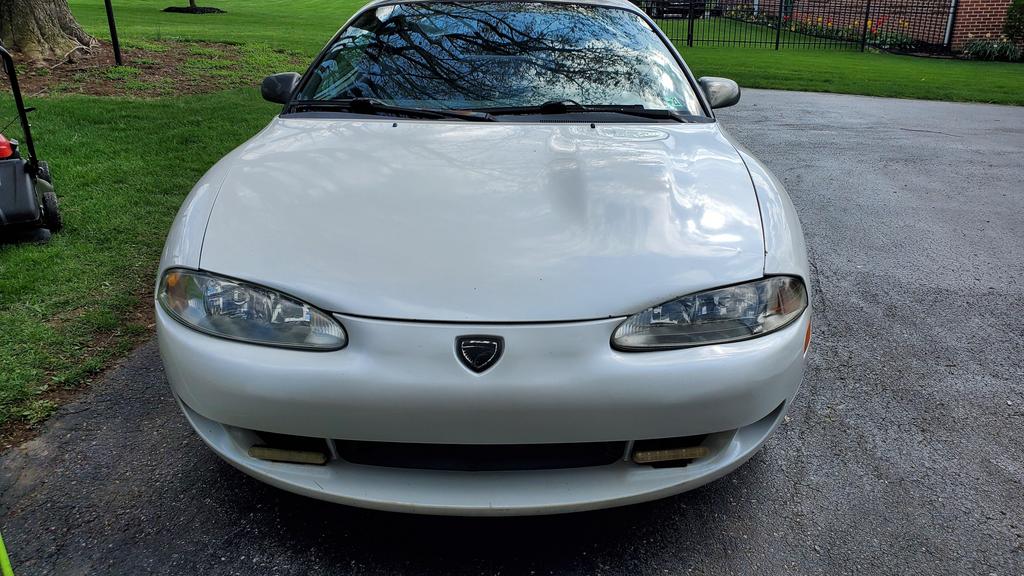 Ordered tires today as well, going in Tuesday. Good thing as the one tire has a belt broke. I mean, it's from 2009 so it's got every right to, lol. Also ordered a set of Raybestos coated rotors front/rear and their Element 3 pads. Seems silly on something like this, but the whole lot shipped to my door from Rock Auto was $135... Also ordered a better shift knob off Amazon as well.

Changing the oil today I noticed the bottom control arm forward and rearward bushings are shot. Honestly those are gonna get cheap replacements. $11-15 on Rock for the whole thing rather than just bushings. At 237K I think they have every right to be shot.

The thing that's gonna save me is I can do all the work on this myself. If I was paying somebody I could never do it.
A

Gotta ask - what oil went in?

Rotella T5 10w30 and a Supertech ST16 filter. Gonna be a short run to clean it out. It's more than likely going to a 5w40 as it does smoke a little bit after getting back on the throttle going down the mountain. To be expected though.
G

Maybe this is a dumb question, why are you trying to keep miles off a Tacoma and a Camry?

I agree, a Camry is an ideal car to pile the miles on.

Yea, it seems a little silly, I know. However it'll be less wear and tear on the "nicer" vehicles. That and with lower miles I get a break on insurance, which more than covers the cost of the Talon. Don't have to worry about getting my doors dented at work as there are several hundred cars parked there at any given time. That and honestly, I need something to tinker with
G

Delta said:
That and honestly, I need something to tinker with
Click to expand...

Haha, understood. Enjoy your new toy.
You must log in or register to reply here.

Thinking about buying a beater car
2 3