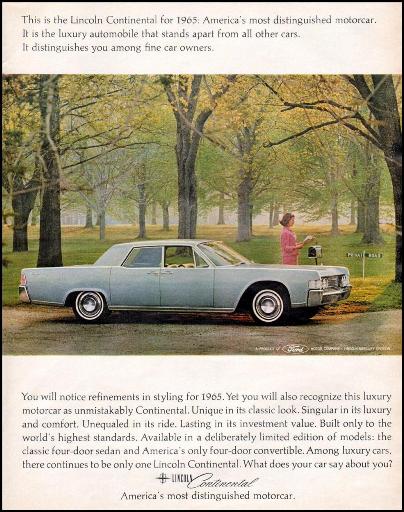 Fifteen years later this is still a classy looking car. I would like to have one with the new Ford power train in it.
R

Maybe Ford will get back there in the near future...

Almost makes me want to rent "Animal House" again.
I

Originally Posted By: Johnny
Fifteen years later this is still a classy looking car. I would like to have one with the new Ford power train in it.
I guess it looked good in 1979... Still looks good to me 45 years later too

I would mind a new drivetrain in something like that either, maybe new brakes as well...
B

The one car of the '60s I'd most like to have. I got to sit in several when I was 12 or so, and owned a '65 Mercury with a similar interior. Note the upper-class symbols: A "Private Road" sign; lots of real estate around the car and its driver, thus implying she does not live in a cookie-cutter suburb; and the Jackie Kennedy-style outfit on the woman (though Jackie was no longer First Lady when this ad appeared, we all know she continued to exert a powerful force on our social consciousness). In the pilot for "The Man from U.N.C.L.E.," filmed in late 1963, Robert Vaughn's Napoleon Solo drives one of these in white or cream . . . and Vaughn himself bought a black cherry model with a car phone (!). He still has it today.

I would mind a new drivetrain in something like that either, maybe new brakes as well...
I paid my taxes yesterday so my math is not to good this morning. I really messed that one up. Thanks for the correction.
S

Beautiful Car! Does anyone know when they stopped putting the "suicide doors" on these?
B

Originally Posted By: scudpilot
Beautiful Car! Does anyone know when they stopped putting the "suicide doors" on these?
I think about 1969 or 1970.
X

Originally Posted By: scudpilot
Beautiful Car! Does anyone know when they stopped putting the "suicide doors" on these?
When they went to disc brakes, they didn't need the air brakes anymore then.
4

Bit O trivia- That era Lincoln was still based on styling done by Elwood Engel before he moved from Ford to Chrysler (replacing Virgil Exner) in late '61, although they changed the detail styling every year. So for a while there, circa 62-66, Engel had versions of his designs in production at both Ford and Chrysler. Ever notice how similar a '65 Imperial looks to the Lincoln, apart from the suicide doors? http://www.imperialclub.com/Yr/1965/index.htm Engel was mostly known for simple rectangular lines like these, which is probably why Chrysler hired him from Ford... Exner's wild fins, "toilet seat" trunk lids, and other details were getting outright weird by 1961. But Engel was also the guy behind the "banana nose" '61-63 Thunderbirds: http://www.carnut.com/cgi-bin/image.pl?/show/00/kkoa/kkoa246.jpg and the Chrysler Turbine Car: http://www.familycar.com/Classics/chryslerturbocar.htm
T

I think the Nation of Islam owned a whole fleet of those babies.
T

That is by far my favorite boat from the sixties. I'll take a Lincoln of that era over a Caddy any day.
You must log in or register to reply here.