Just starting to look for new tires for our 2015 Sienna LE (FWD) Minivan (235/60/17). The OEM Firestone 710 tires are shot after 27,000 miles and they were not even on the car the entire time as we run snow tires on separate set of wheels in the winter. So I am guessing we got like 20,000 miles tops out of the OEM tires! Anyhow these vans are known to be hard on tires; therefore, I am not looking to break the bank on top of line tires. Looking for something middle of the road with a smooth ride, good rain traction, and perhaps LRR. Any suggestions? Should I be considering an LT tire or XL load rating?

27K miles is unacceptable. There should be some pro-rated warranty and you should send a complaint email to the company. I have had SUV tires last 70K+ miles in the past with gentle use and frequent rotations.

A lot of people, including myself, like Cooper CS5s. I have 8 currently on my yotas.

Yikes, what a horrible OE tire. Our odyssey came with Michelin Primacy mxv4 tires in around that size 235/65-17, IIRC). I was looking at them just yesterday, and with 20k miles still look like new, granted they start with 10/32" tread. The van is used mostly around town, but gets road trip duty too. Id buy these tires again. Very impressed with the OE Michelins on both my Hondas.
O

I have a 12 Sienna and had the Continental Conti-Pro-Contact-Eco Plus for about 45,000 miles. They stopped making them so I am now using a Continental True-contact now. They were on the cheaper end of the spectrum compared to Michelin Primacy MXV4 and such, but probably not as cheap as the Firestones. Check out Tire Rack or Consumer Reports reviews to see if they are rated.
D

Kudos on driving a minivan and using winter tires.

If the van is hard on tires, that makes it extra important to have a tire that continues to perform all the way down to the wear bars. That doesn't necessarily mean top-of-the-line, but it does mean better than Firestone. Just based on what's on Tire Rack for your Sienna, I'd go for the Michelin Primacy MXV4, no question. Not my favorite option, but I don't see anything that'd be better. It has a 6 year/60,000 mile treadwear warranty, which is nice. No need for an LT tire or XL load rating; those would just increase NVH with no real benefit.
E

Picky1, Former owner of a 2012 Sienna XLE FWD with the 235/60/17 tires. I tried multiple tires on it (Michelin Primacy MXV4s (OEM), Bridgestone Dueler Ecopia HL 422, Firestone FR710s, Cooper CS5 Grand Touring). The best results came from the Cooper CS5 Grand Touring tires. They took my family through multiple 1,000 mile trips, as well as northeast weather including rain, sleet, snow, and ice. I made some comments in the below thread: https://www.bobistheoilguy.com/forums/ub...d_Touring_initi The CS5's held strong (and had the best wear of the four brands I tried) until I picked up a 2015 Sienna Limited AWD with the Bridgestone run-flats. Those were replaced with Michelin Defender LTX tires, which are phenomenal. Unfortunately, they do not come in the 235/60/17 size. -Eugene
E

I also dug through my old posts. Our OEM Michelin Primacy MXV4s made it to just under 15,000 miles with 3/32 remaining. So your 20,000 mile life on the OEM Firestones isn't too far off. https://www.bobistheoilguy.com/forums/ubbthreads.php?ubb=showflat&Number=3085106 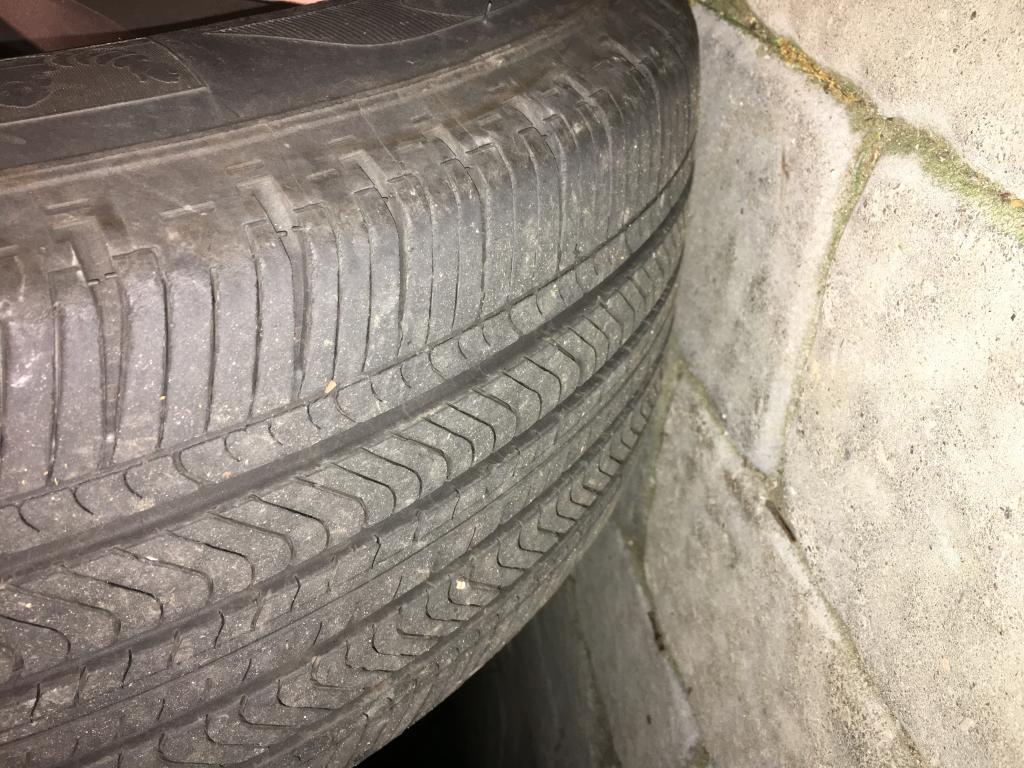 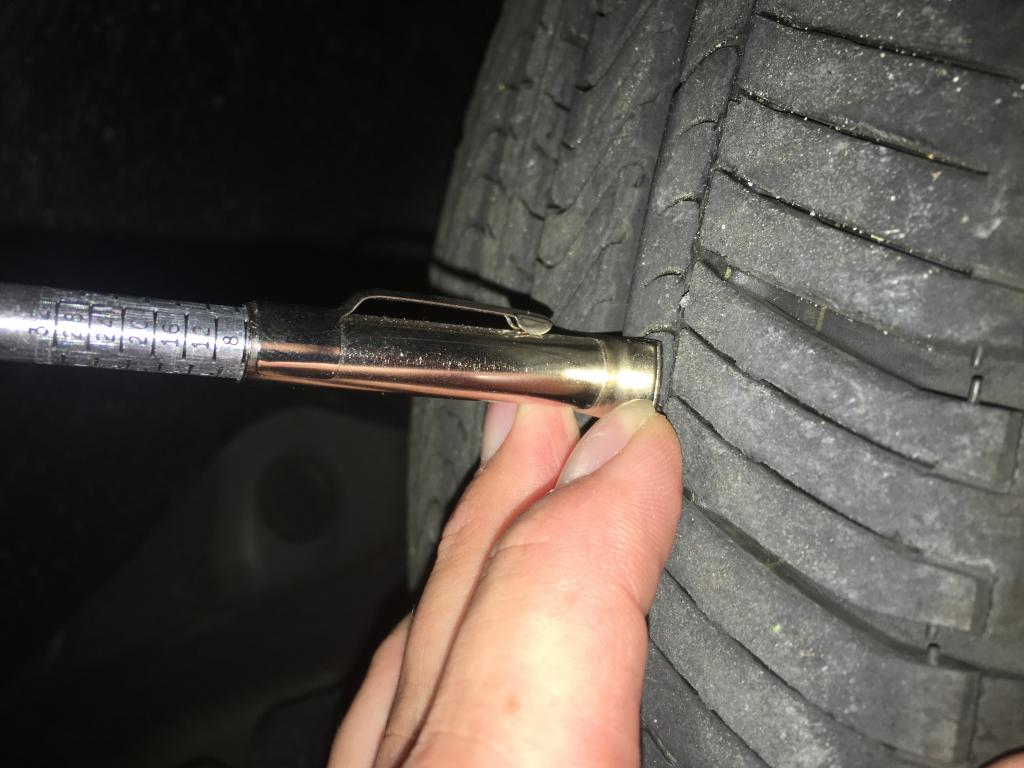 I had MXV4s on my 14 and. They got about 30k miles. They were mild mannered and had good traction. Found a deal on discount tire for 100 plus 60 off some General rt43s. Good tires and got me out the door for under 400 installed. Wife said she doesnt have to turn the radio as loud anymore.. all i needed to hear.
M

I have had great experience with Nitto tires on my work trucks, so when it came time to buy tires for our 2012 Sienna I decided to try the Crosstek CUV. I have 18K miles on them so far and am extremely pleased with the wear and performance - in fact I rotated them yesterday and they still look almost new. They handle excellent in Florida rainstorms and are definitely on track to outlast the Firestones (which made it the first 40K miles on our van). This van also pulls a 2,000 pound boat around many weekends and on a couple road trips each summer. I want to say the Crossteks are rated for a little more weight than the OEM Firestones too (I refused to buy a tire with less capacity) but you might want to verify that for yourself. These vans are pretty heavy for the tires they come stock with.
G

Go for the continental truecontacts. Had them last car and just put them on my Malibu a few months ago. Amazing wet and snow traction, and a 90k treadwear warranty.

See what Toyo makes for your vehicle. After blowing through some Goodyear Eagles and Cooper Zeons on my wife's Infiniti, the Toyo Versados have performed and lasted well.
S

Originally Posted By: FirstNissan
27K miles is unacceptable. There should be some pro-rated warranty and you should send a complaint email to the company. I have had SUV tires last 70K+ miles in the past with gentle use and frequent rotations.
Don't forget that the OEM tires are often a softer compound version of that line of tire, since it makes the ride more comfortable in a new vehicle.
9

I'm a Michelin fan because I research everything (OCD issues lol) Michelin ice-x for my wife's 2009 sienna and defender Ms/2 for my Equinox. Wife's regular tires are wore out and I hope that they last the summer. I will dump them when I have the snow tires put on and get new one's. Current ones are defenders. Had them when I bought them and not​ sure of the miles on them. I'm getting perelli p4 tires in the spring. According to consumer reports (for what that is worth) and the many reviews on tire rack, they will last the 90,000 mile warranty​. Walmart sells them too.

Picky1- if it's any consolation, I'm on my 4th different make/model minivan and they're ALL tough on tires. IMO, it's the weight of these suckers that does them in so quickly. I've tried various Coopers, Mastercraft, Yokohama, Firestone, Bridgesone and probably others. Lucky to get 30K miles even with somewhat regular rotations.
Last edited: May 2, 2017
S

We had Michelin Energies on our 2011 Camry, and they were toast at 30k. Primacy MXV4's were done at 30k but I ran 'em to 40k (deep into the wear bars). Must be the nature of the roads we drive. General RT43's appear to be a 40kmile tire, I think that is what I got out of the first set. For price&performance I'll stick with RT43's. Ok in snow too when new.
V

I got just over 20kmiles out of the OEM tires on my RAV4 and then less than 20k from the terrible OEM tires on my FXT...granted, I do drive aggressively, but that's still pretty ridiculous. OEM tires now are generally made to be cheap to the car maker and give good gas mileage in testing, nothing else. The Bridgestone Dueler H/L 400s that came on the FXT were so imcompetent in winter conditions that it was hard to believe, and they are insanely expensive as aftermarkets ($216/tire on TireRack) to really fleece those poor saps who think they can only buy the same tire their car came with when it's time for replacements. Nothing against Bridgestone, I had some Duelers of a different flavor on my RAV4 that I was very happy with. My wife has had two sets of MXV4s on her Avalon and they are pretty good as far as all seasons go, and we are very happy with the RT43s on my daughter's Impreza...not sure how they would be for a bigger vehicle, though. We bought the RT43s a few days after the car because the OEM tires had brutal online reviews and I had such an awful experience with the OEM tires on my Subaru (different brand). We consigned the Impreza's OEM tires and got about $150 for them, I felt guilty taking even that for them and hoped the buyer didn't have to drive through hills in the winter.
Last edited: May 2, 2017