Seems like I need a shop truck more & more, I've been using my 2500HD Duramax as a stop-gap.....Both my tail light lenses are now cracked, A dent in my tailgate & a couple small dents in the bed sides I could've sworn weren't there. My fault for using my personal vehicle as a shop truck!

I've had this 2000 Silverado 1500 extended cab 5.3L/4L60E with 200,000 miles at my shop for @ 9 months, I removed the left cylinder head to check out a lifter tap/loose rocker arm on #1 Intake.....Lifter Roller failure that ate up the Cam & caused a fair amount of metal contamination. Quoted a used engine.....It also needs engine mounts, A power steering pump, Both knock sensors & sub harness. The Harrison H6 compressor is leaking (This is right before GM started using Denso compressors).
Of coarse a used Gen III 5.3L will need to be resealed before installation along with a new water pump, spark plugs & ignition wires as they're original.

Came out to more money than these folks were willing to spend, Not surprised as this truck has not been well maintained mechanically.....They kept dragging their feet as they owe me for removing cylinder head. Then they started ignoring my calls. The owners brother is a good customer & that's how it ended up here to begin with. So I call the brother & tell him something needs to be done here.....At this point storage fees have eclipsed the truck worth IF it was running......He either needs to bring me the title or pay what he owes & have this thing towed off.

This ought to be perfect for my use, The engine will stay 100% stock except for ARP exhaust manifold bolts. Trans will get a filter & fresh fluid along with some custom tuning to prevent Converter failure.
*New OE engine mounts ('99-'06).
*Convert to 2001 & up A/C hoses to use the '17 Denso Compressor.
*Mount & wire a APPS (Pedal) in the truck.
*OE Oil Cooler lines for a '99-'04 GMT-800, And a Radiator with a oil cooler.
*I have a good used '99-'13 power steering pump, New power steering hoses & have the Rack & Pinion rebuilt.
*Try to run the '17 150amp Bosch Alternator.
*The front part of the driveshaft will need shortening, Assuming there's a weld-on end for the huge 1485 U-joint?
*Rework the trans cooler lines & add a auxiliary cooler.
*Probably run the original PCM with the minimum circuits to operate the fuel gauge. Though I will attempt to get the '17 E78 PCM to run everything & retain the virtual E85 alcohol content strategy by modifying the fuel tank volume in the calibration.
*Aeromotive fuel pressure regulator as the '17 fuel rail is returnless, Not sure how this will play into the virtual E85 strategy?

The hood is in sorry shape, But the paint is in decent shape otherwise, I'll likely buy a HD hood from CertiFit & spray it with some single stage enamel. 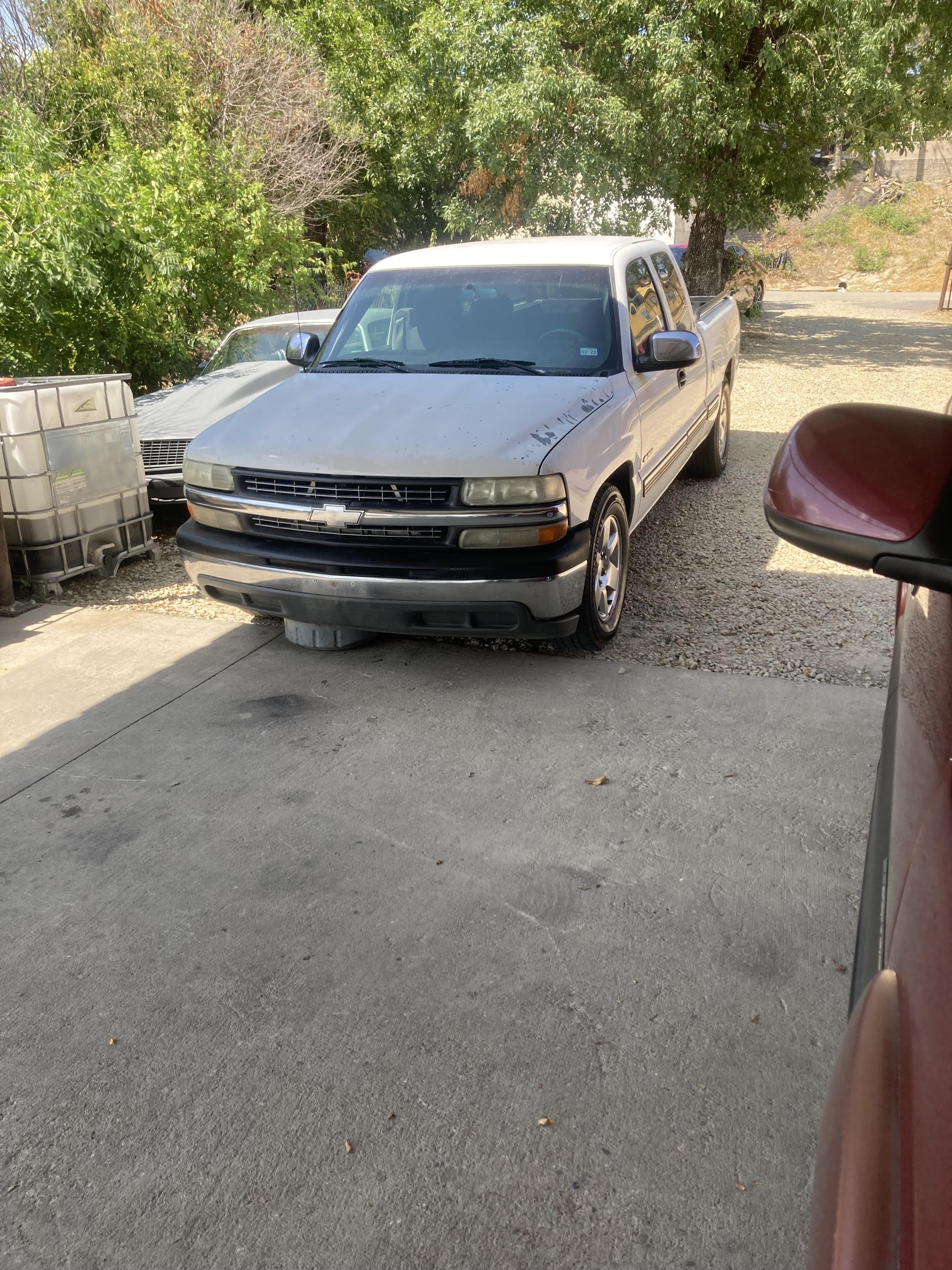 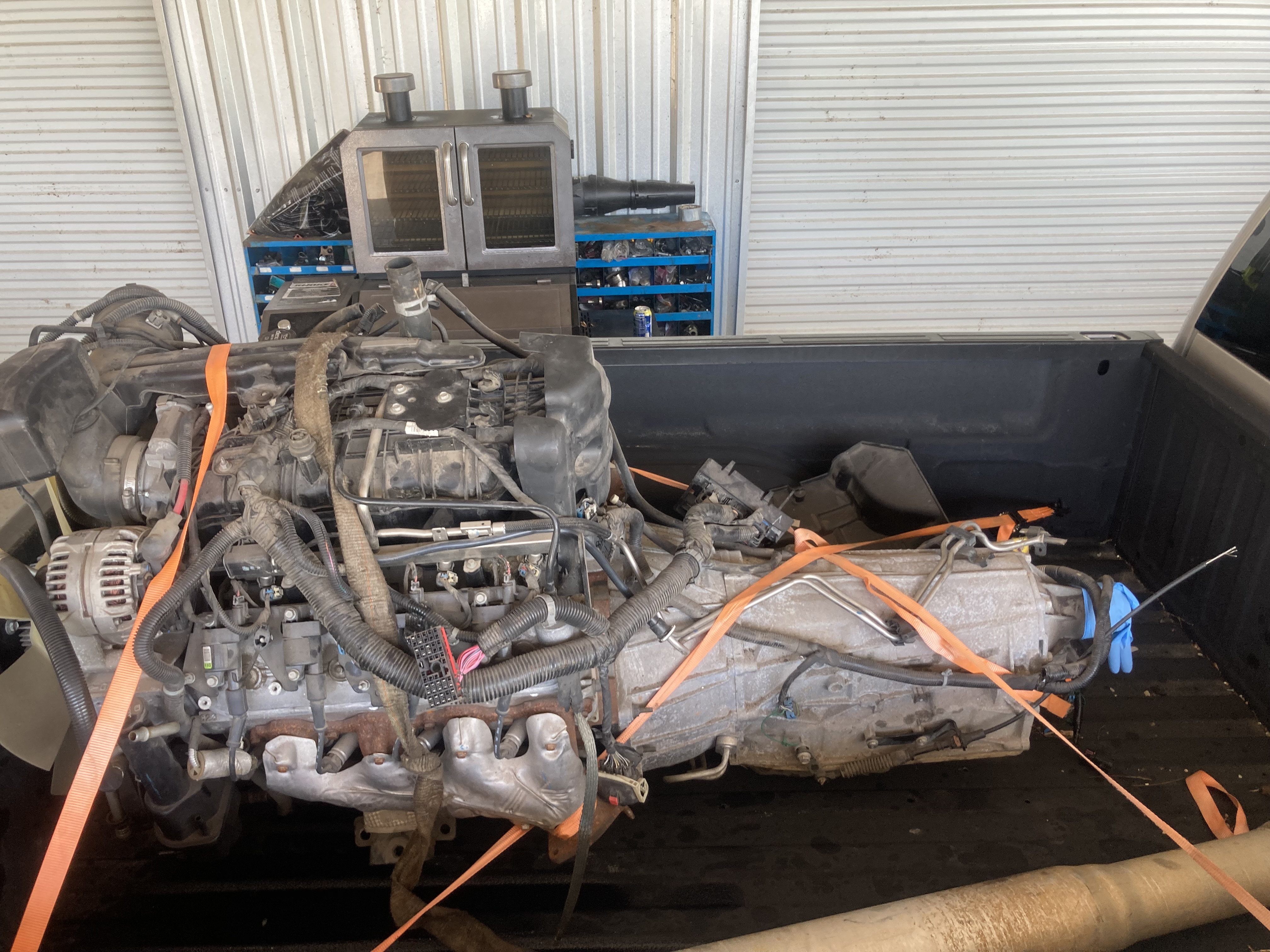 Now this should be an interesting project! I've got my popcorn ready!

Sounds like time paid off for you (the time the truck sat around) and a good friend's help you are going to have a great truck there for all your needs!

clinebarger said:
The engine will stay 100% stock except for ARP exhaust manifold bolts a giant Chinese turbo.
Click to expand...

I had the exact truck BITD, would have been real nice with a 6.0. Looks real straight for not being kept up mechanically.

An HD hood will make guys scratch their heads. Going to be a great truck.
A

I will be watching this. I love a good engine conversion.

I thought that a hood with damage/patina was all the rage for shop trucks, along with a 1-2” lower and gutted interior?

seriously, it looks like a solid chassis and one heck of a power train for it.
J

That truck will be in service for a long time. And still be worth some coin. Keep 'em alive!

I only have time to work on this in the evenings, So it might be a little slow going at times. 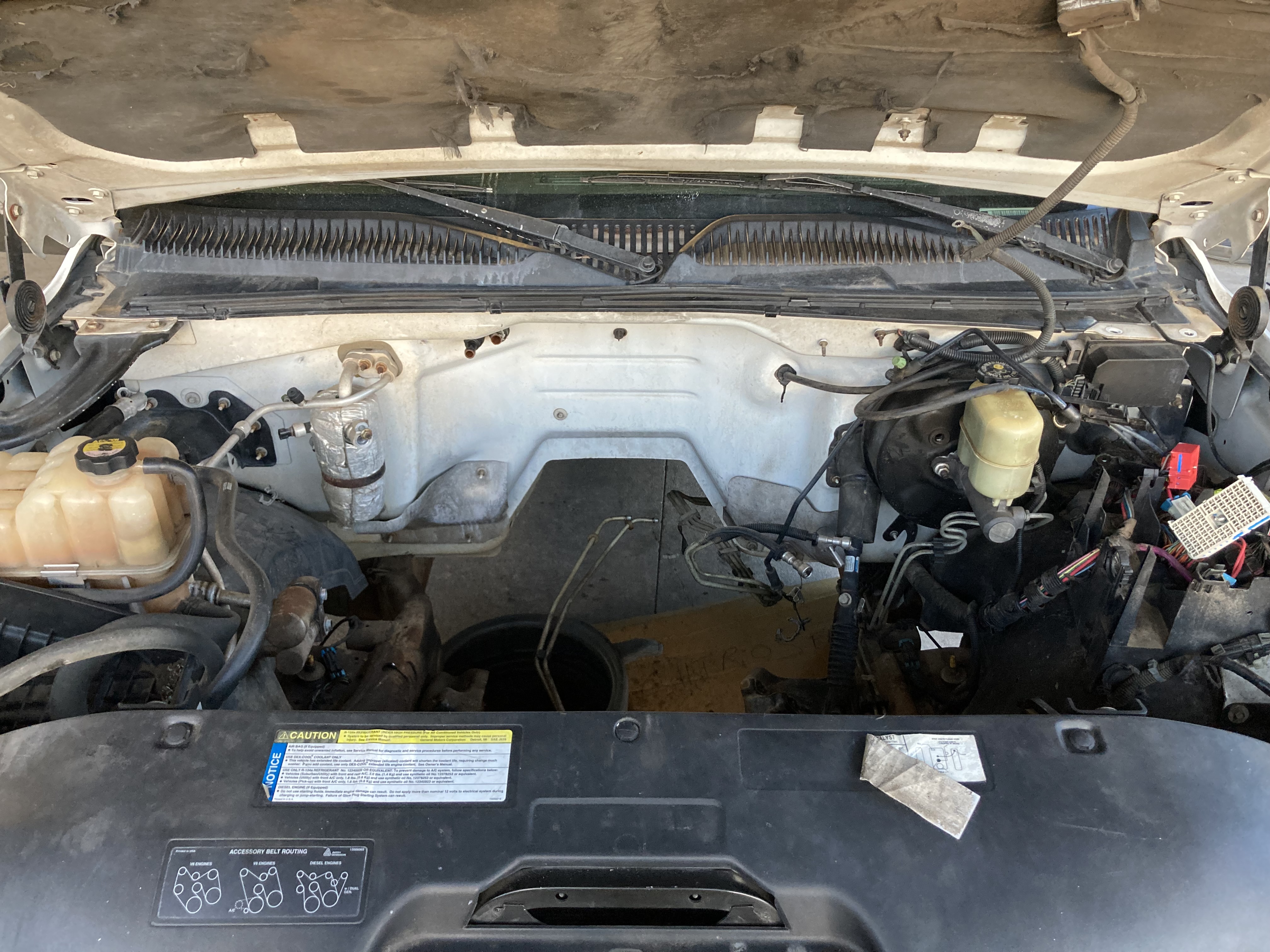 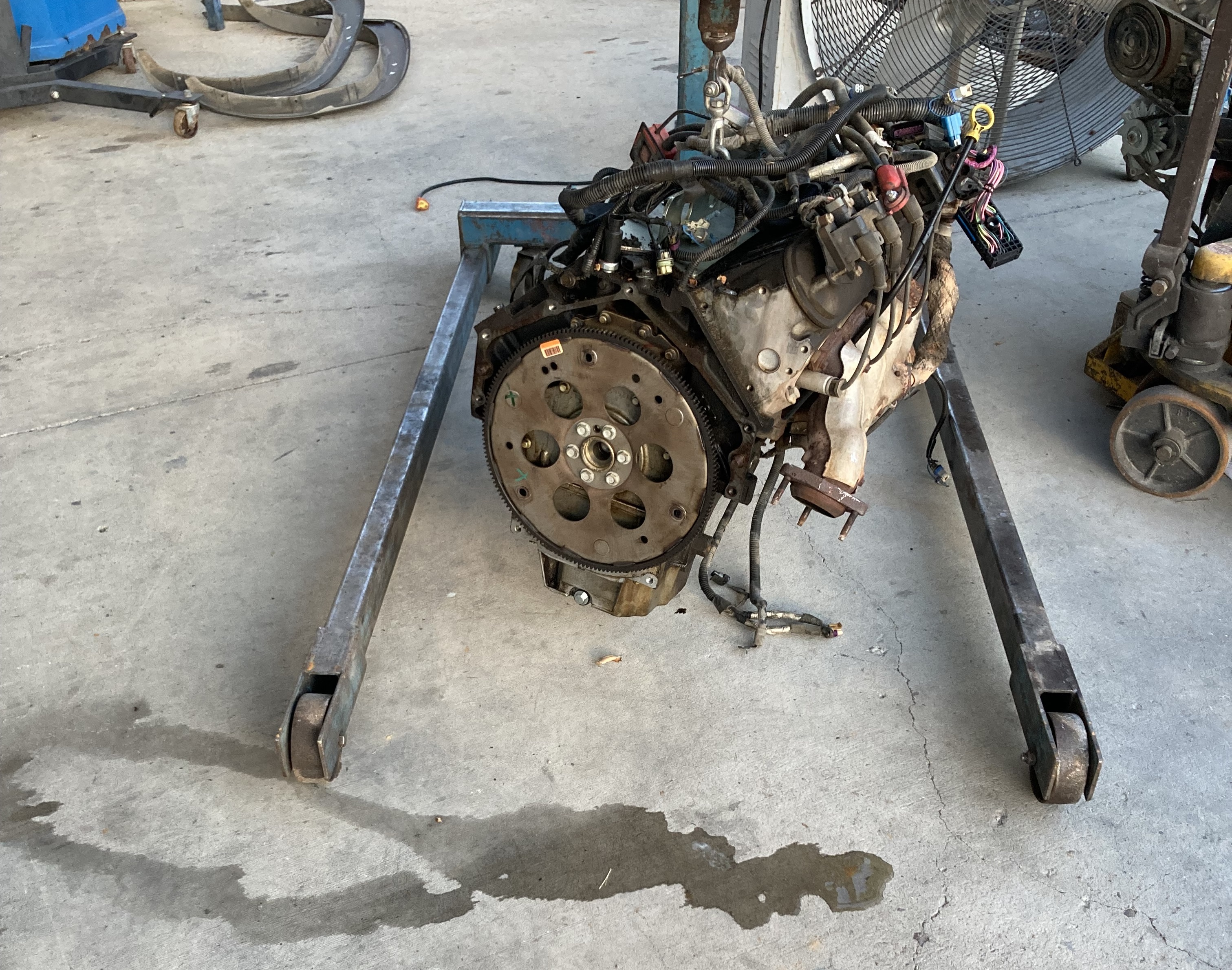 @clinebarger whatever happened to that tow motor you were building for the old fellow that unfortunately passed?

The family came & picked it up along with the truck. They didn't seem very happy that he had spent so much money on it & by extension wasn't very happy with me either. I was going to help them sell the engine to help them recoup the money, But the word lawyer & sue was mentioned & that made me clam up!!!

It wasn't the Window that had issues....It was the 2 grown sons that were running their mouths....I kept my composure out of respect for their old man even though I doubt they were acting that way out of concern for their mothers financial well being.

I bet that engine is still sitting in the back of that truck....Full of rain water!
C

clinebarger said:
The family came & picked it up along with the truck. They didn't seem very happy that he had spent so much money on it & by extension wasn't very happy with me either. I was going to help them sell the engine to help them recoup the money, But the word lawyer & sue was mentioned & that made me clam up!!!

It wasn't the Window that had issues....It was the 2 grown sons that were running their mouths....I kept my composure out of respect for their old man even though I doubt they were acting that way out of concern for their mothers financial well being.

I bet that engine is still sitting in the back of that truck....Full of rain water!
Click to expand...

Ugh, nothing brings out the bs like a family arguing over a dead persons things. I'd hoped for a happier ending, but it seems like when someone passes there's always tons of drama to go with it.

There's still a part of my family I don't speak to over a $50 savings bond from 20 years ago when our grandmother passed,

The power steering pump I thought was good was Roached, Found a Pump off a '03 4.3L V6 in my stash that's in really good shape. Pump & Pulley is the same as a V8, Just had to swap the rear bracket.
The '17 Alternator Bracket won't accept a Saginaw Pump, But I had a 2001 V8 Bracket.

I could've made the '17 "Type 2" Pump work with a custom pressure line, But I don't care for Type 2 pumps! And trying to keep custom maintenance items to a minimum!

The original battery cables off the 2000 were in sorry shape & I can't use the '17 cables because the battery is in a different location. Had a good set of unmolested GMT800 cables.

I don't think the intake resonator will clear the hood.....Looks a little stupid anyway. 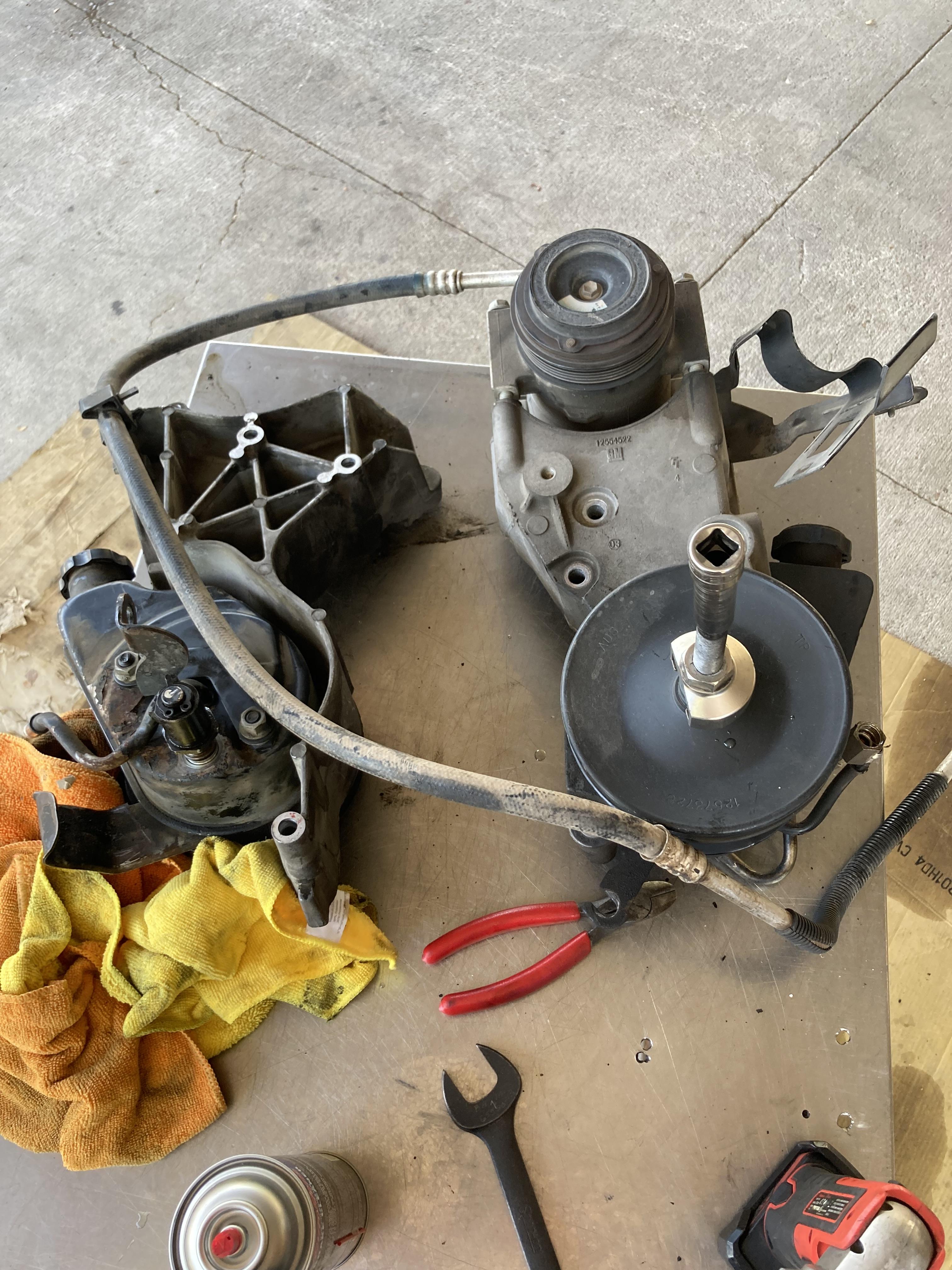 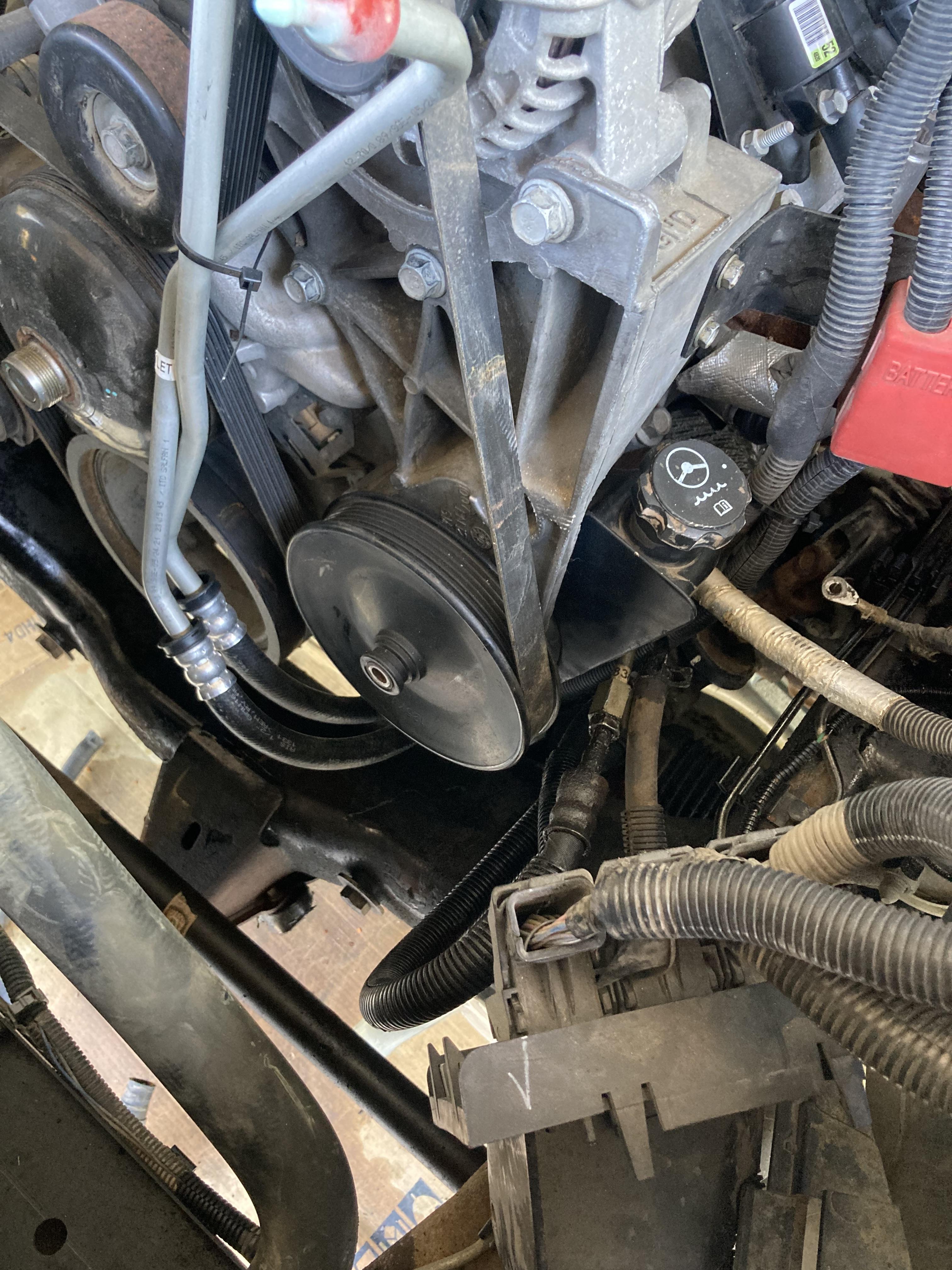 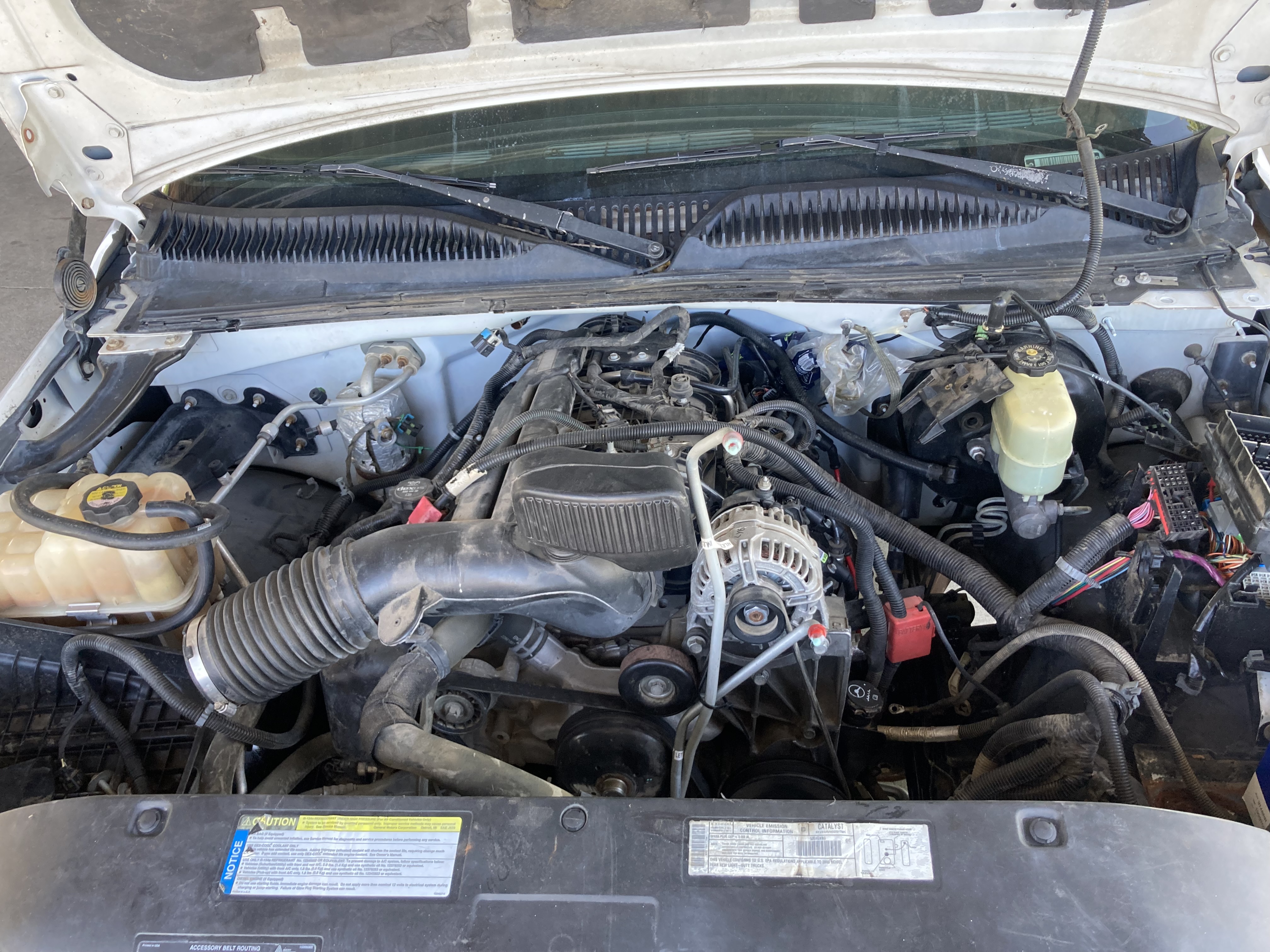 Got the transmission crossmember modified, It was easier than I thought. '99 & '00 C1500's use a different crossmember than '01-'07's which made it easier.
Used a band saw to cut the Mount Perch off, Flipped the perch around & welded back on the crossmember. It wasn't all that far off.....The 6L90E mount only sits @2" further back than a 4L60E.

The Exhaust Y-pipe off the LM7 bolts right to the L96 Manifolds, The catalytic converters are staying, But no rear (post cat) O2 sensors will be used. 2 new GM OE front O2's are installed.

This truck has a funky (loud) cat back on it, My exhaust guy had a factory take off cat-back for $50! I'd like to have a entire 2500HD/1500HD exhaust system but it's near impossible to find 100% complete-unmolested ones.

Whomever pulled this powertrain mangled the heat shield on the side of the trans, I'll have to source one of those.

The driveshaft doesn't need to be cut, But will need to be modified because 3R U-joint 36 spline 6L90E Slip Yokes do not exist, All of them use 1415 AAM U-joints.
For now.....I'm going to have a 1350 end welded onto the driveshaft & run a 1350-1410 conversion U-joint, The other two 3R U-joints replaced, New carrier bearing & the whole assembly balanced. I doubt I'll ever have issues as I'm not racing or pulling loads outside what the truck was originally rated for. 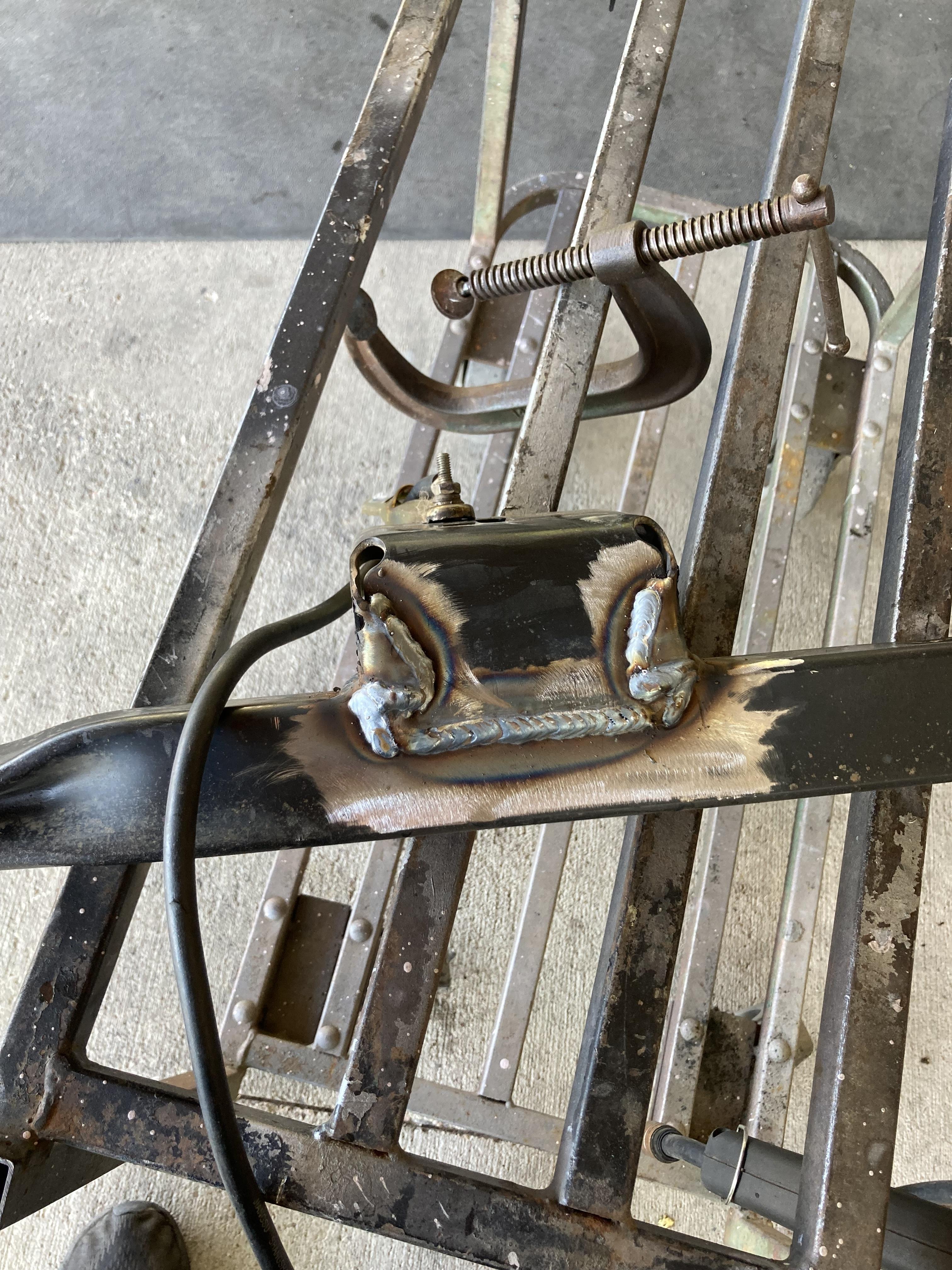 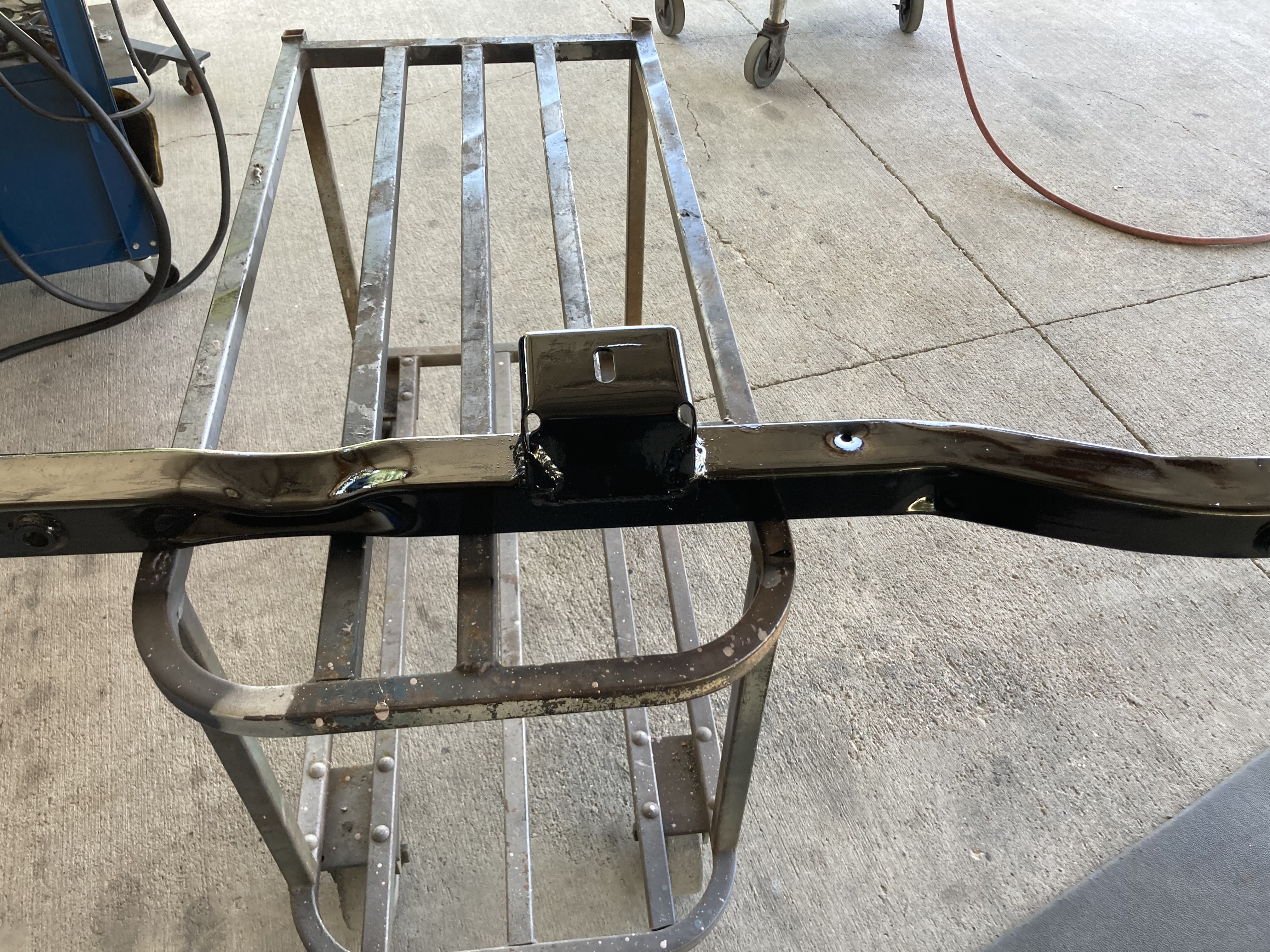 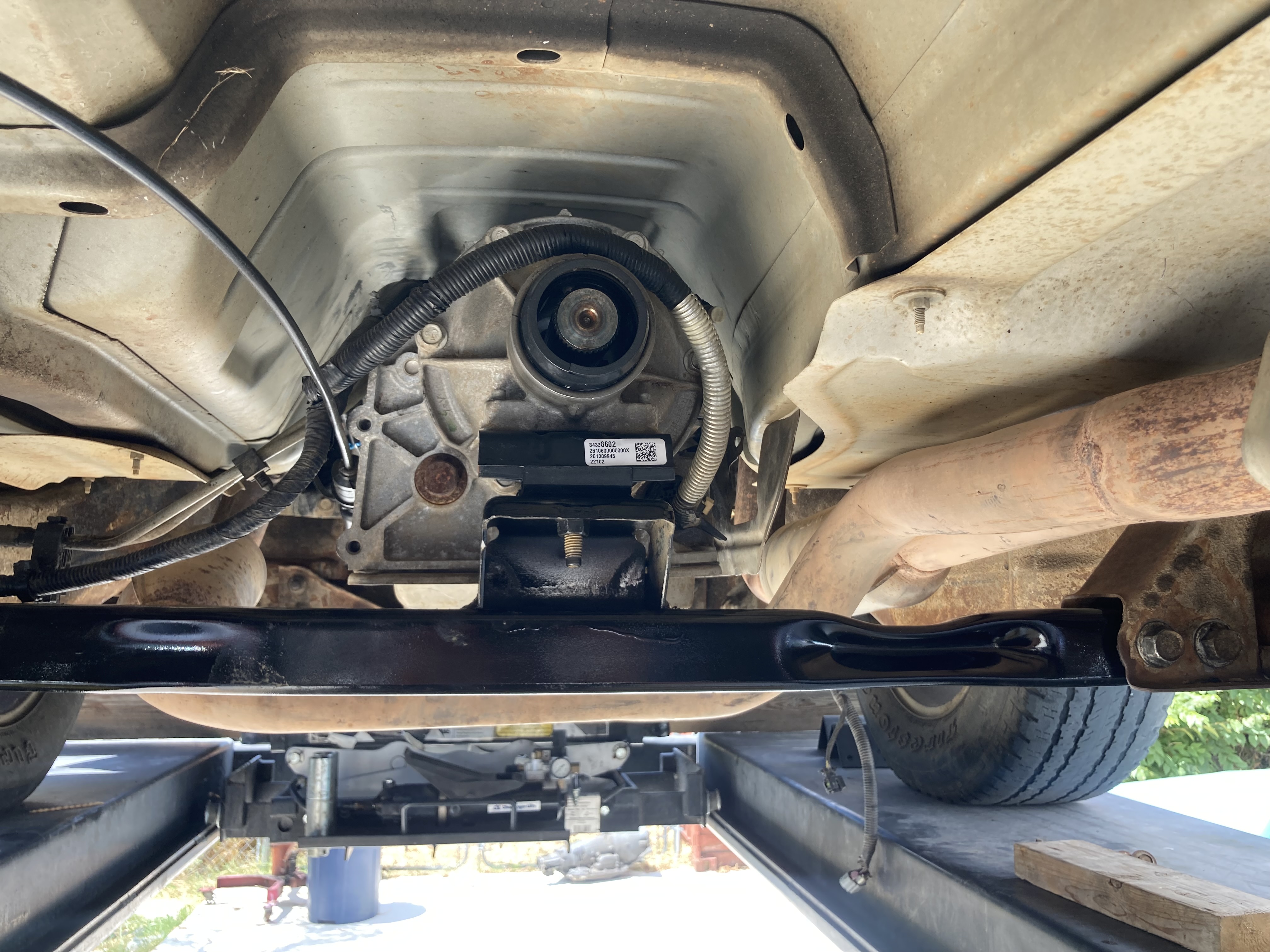 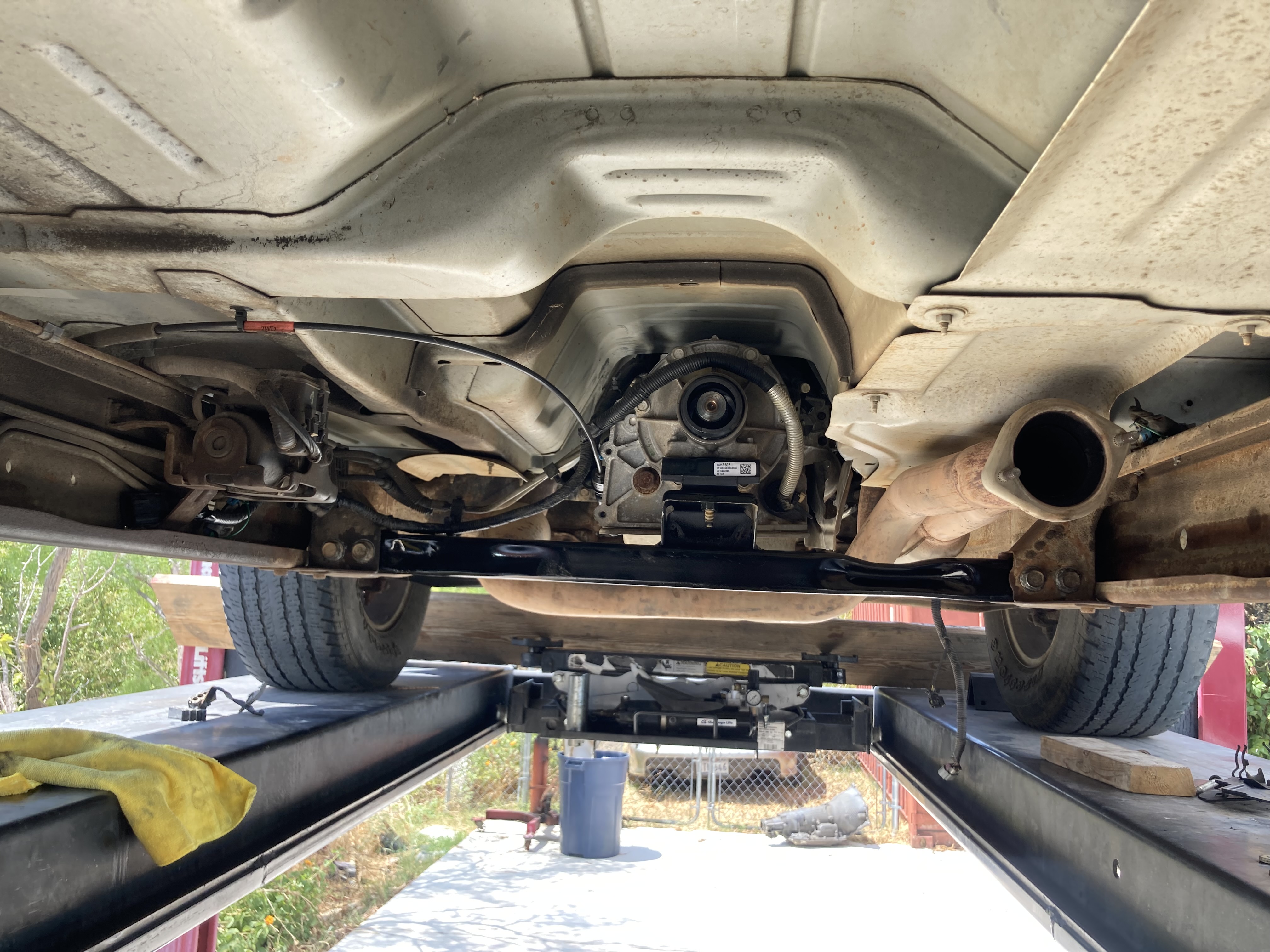 Needed to braze a -6 fitting on the return line, Got the line cut, Cleaned up, Blew what residual fuel was in the line back into the tank. I didn't really want to drop the EVAP Canister to remove the return line......But I lit the end of the return line with a lighter & couldn't keep the fumes from venting through the line. No way I was going to put a torch to it. So I pulled the line to braze the fitting on.

I know that C5 Corvette fuel filters with built in Regulators are really popular with returnless LS swaps, But once you buy a GM filter ($75) & all the quick disconnect fittings & adaptor fittings which makes it look like a hack job.....$100 more gets you a Aeromotive A1000 regulator & a clean install. Also don't have to spend $75 every time I want to change the fuel filter!

Got the Cat Back hung, Someone was nice enough to cut the 2 rear hangers off the frame , I have a "parts" Tahoe I was just about send to scrap, Cut it's hangers off & welded them on the truck. I was irritated at this point & didn't snap any pics.

The HD hood came in the other day, Knew I needed out of my garage before it got knocked over & damaged, Figured the safest place was on the truck! 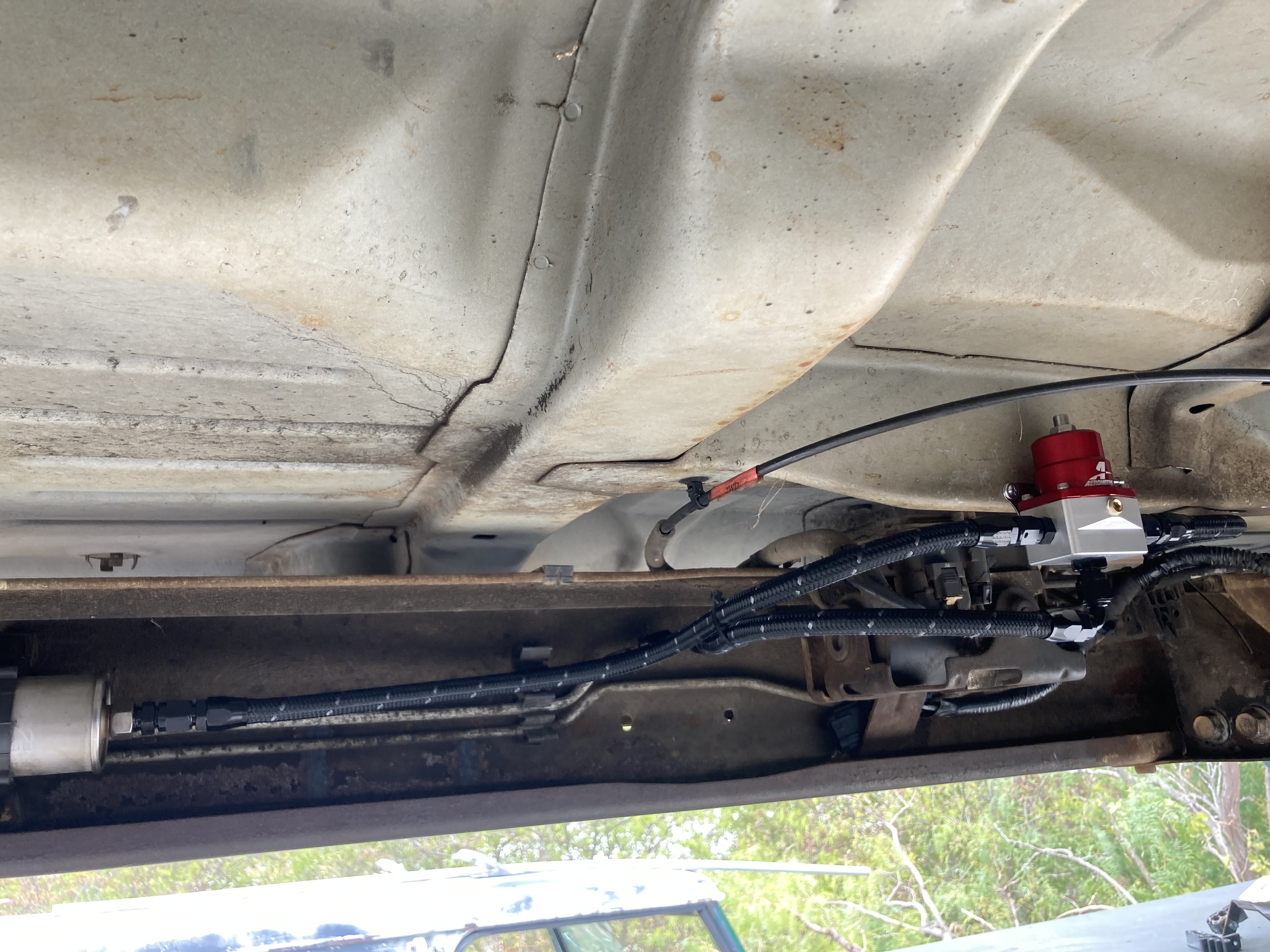 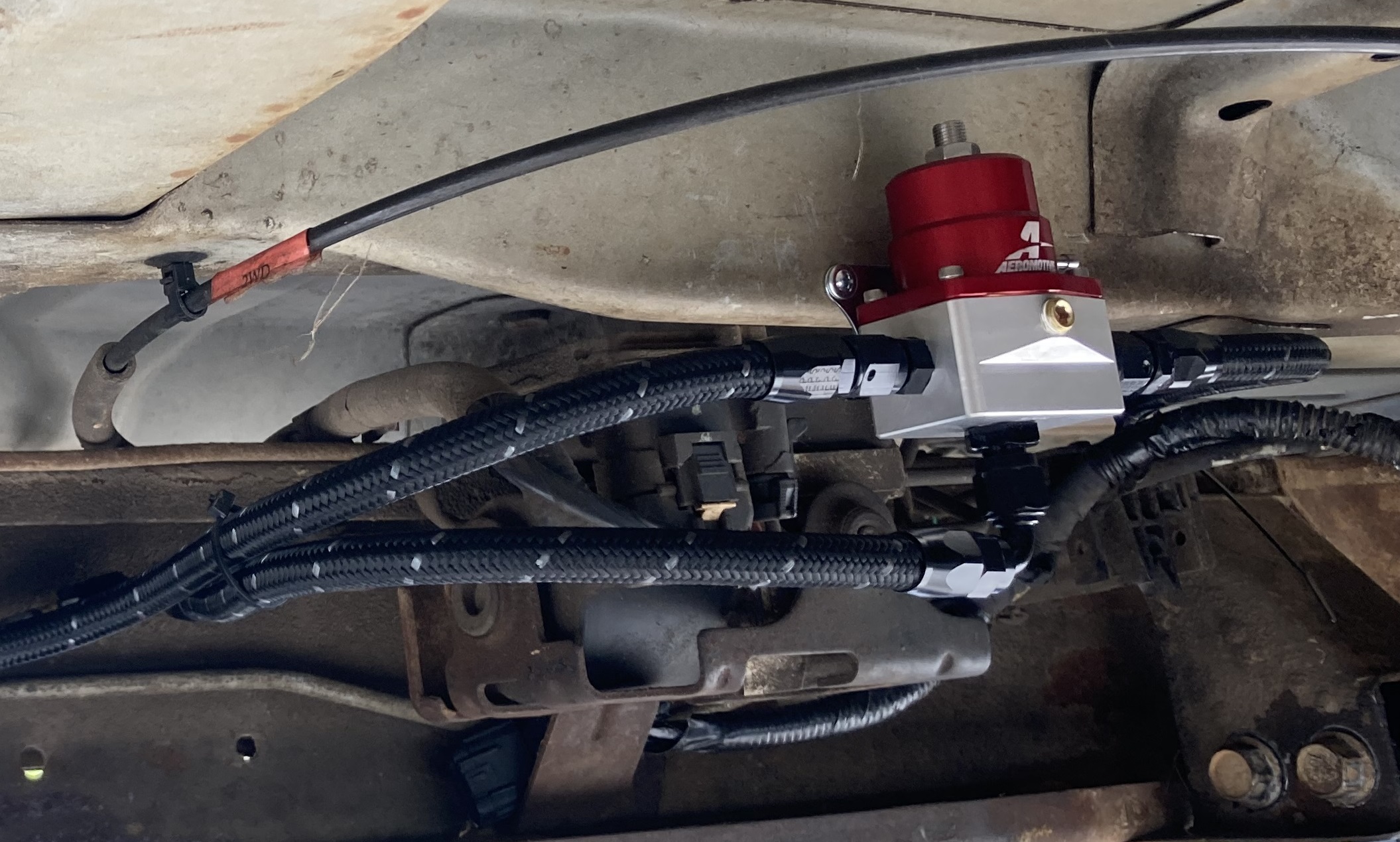 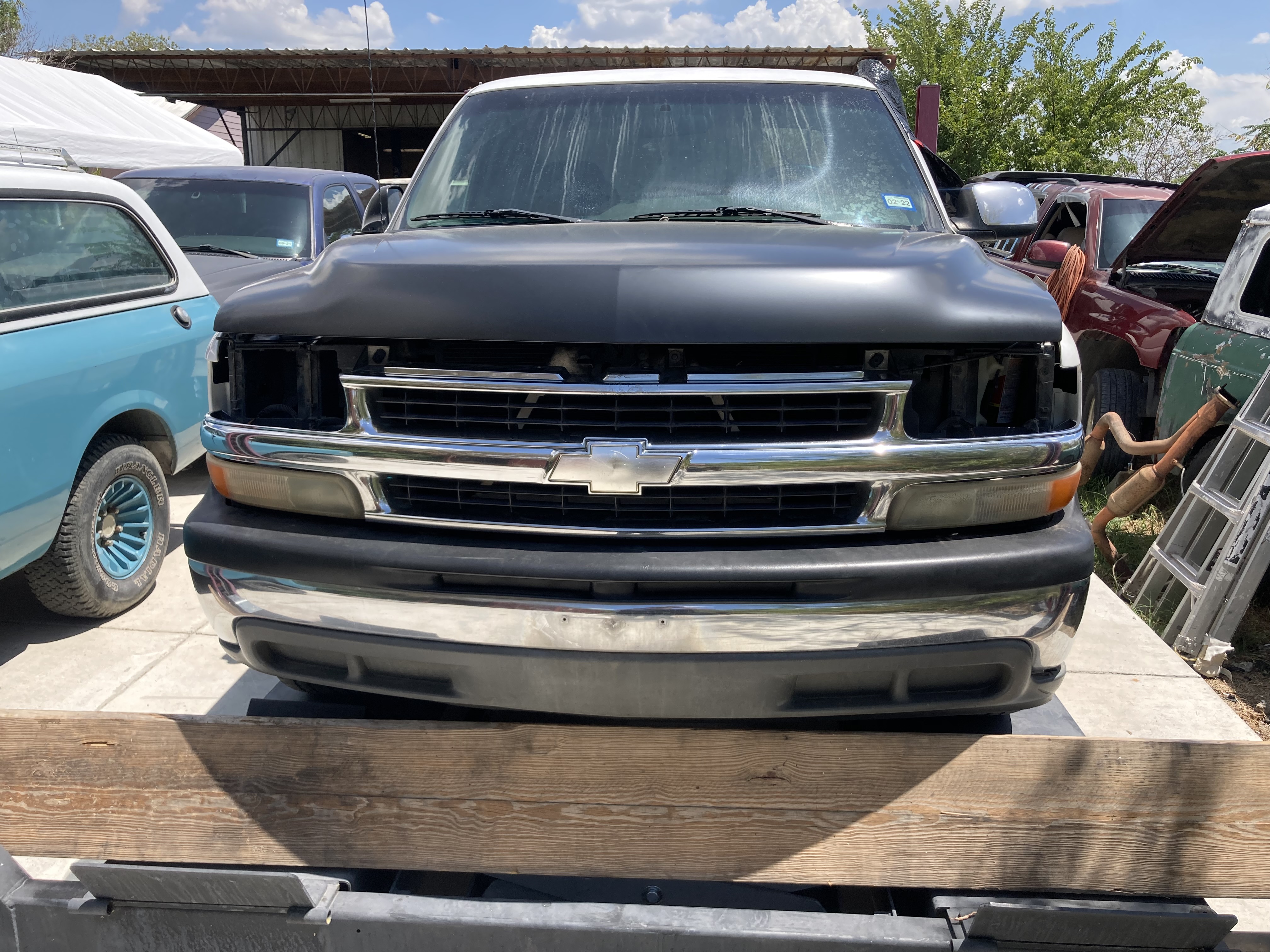 I'd love to know how to plump a fuel system ... larger hoses perhaps?

I kid, I kid. Nice work and you'll have a great truck when this is done!

No excuse for that.....P & B are pretty far apart on the keyboard
J

That is one lucky pickup to get the love...
You must log in or register to reply here.