So with your disclaimer at the end, you're saying that your whole premise for the post is just a guess?!?
T

same with Mobil Delvac...how many is there now

Curious, what is the noack between the two? Isn't it as VI goes up the volatility goes down? So T6 would have more volatility (burn off) than RGT? And since you don't know the quality/type of VII's, you can't really say with a degree of certainty that RGT's use of VII is to a detriment? Edit: the 3.5 HTHS of T6 is nice; Delo 5/30 XSP is another 3 5cP HTHS oil. MaxLife 5w30 is a 3.0cP HTHS also.
Last edited: Feb 8, 2020

Originally Posted by Mad_Hatter
Curious, what is the noack between the two? Isn't it as VI goes up the volatility goes down? So T6 would have more volatility (burn off) than RGT? And since you don't know the quality/type of VII's, you can't really say with a degree of certainty that RGT's use of VII is to a detriment? Edit: the 3.5 HTHS of T6 is nice; Delo 5/30 XSP is another 3 5cP HTHS oil. MaxLife 5w30 is a 3.0cP HTHS also.
Noack gets lower when the base oil gets thicker, assuming the same base-oil type. Since Rotella T6 Multi-Vehicle's base oil is a lot thicker than the Rotella Gas Truck's, Rotella T6 Multi-Vehicle's Noack should be a lot lower than the Rotella Gas Truck's. Rotella Gas Truck 5W-20 seems very good though: KV40 = 46.3 cSt KV100 = 8.3 cSt VI = 156 density = 0.835 HTHS (estimated) = 2.7 cP Base-oil viscosity at 150 C (calculated/estimated) = 2.5 cP Relative VII content (calculated/estimated) = 1% Noack = 7.2% (PQIA) Rotella Gas Truck 5W-20 would be a good oil for a gas truck calling for 5W-20. However, there are better choices for a 5W-30 than Rotella Gas Truck 5W-30.
S

It appears no one mentioned moly. RGT has 160 ppm moly. Rotella MV has 3 ppm as per a VOA that was posted. Doesn't matter much to me but maybe the moly fans might care.

While interesting to some I suppose, I purchased 2 jugs RGT 5w20 for one reason only, it was close out priced at AZ making it basically FOC after $10/jug rebate. Then put it to use in "very hard working" extended family Nissan Rogue.

After the other jug used up, unless a similar close out price with or without rebate shows, unlikely I'll purchase again. As the rebate was a bit of an ordeal to obtain, FOC AR would be the only price point of interest to me. I'd think repeat of that offer unlikely too.

Forget both of them. Delvac #1! 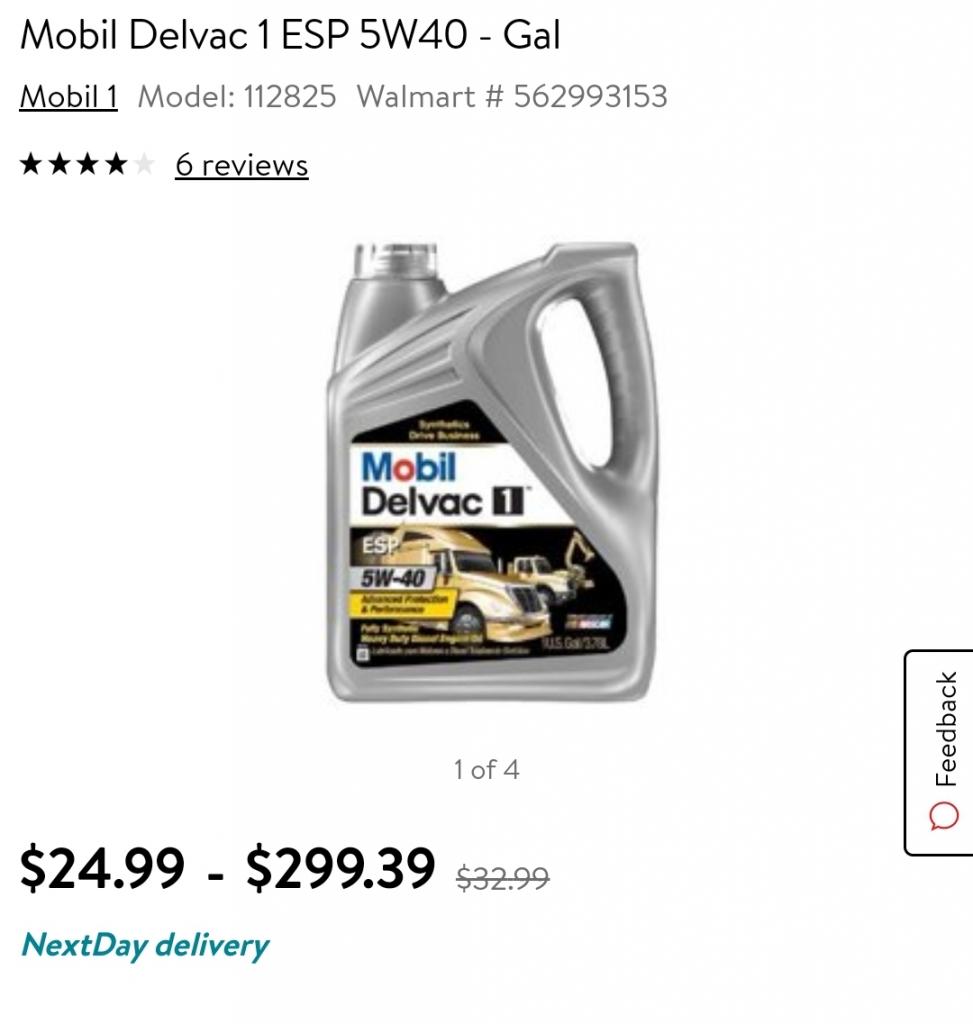 Originally Posted by Snagglefoot
It appears no one mentioned moly. RGT has 160 ppm moly. Rotella MV has 3 ppm as per a VOA that was posted. Doesn't matter much to me but maybe the moly fans might care.

That's where things get interesting and why looking at only one aspect can be misleading. RGT may have a lower coefficient of friction than T6. I agree with Gokhan, but I'm not 100% convinced T6 is much better based on less VII's alone.
P

During the recent AZ 'clearance' I checked several stores....the RGT was the most available for some reason. I grabbed the Mobil1 AP whenever I found it....I even grabbed a few QSUD 0w20s....for some reason I (and apparently others) left the RGT on the shelf....maybe too gimmicky? After seeing the low NOACK and high moly of RGT on this thread....maybe I should have grabbed some 5w20 for my Fords.
A

Originally Posted by Gokhan
Shell Rotella Gas Truck 5W-30 has becoming popular lately because SUVs and pickup trucks are popular, and this oil claims to be tailored for them. However, is it for real or a marketing hype? .... Moral of the story: Don't go with the marketing hype -- go with the certifications. ..... Disclaimer: The calculations/estimates are only based on the viscosity data. There is no way to estimate the quality of the additive pack without engine and bench tests, other than from the certifications/OEM approvals claimed.
_______ A Thicker oil wont reduce wear if the film provided by the thinner oil is adequate. _______ I am going to challenge the logic a bit here as the argument demands the challenge. The extension of this logic is that an HD SAE30 with a C service category is "best" , and anything else is a compromise bowing to spark ignition engines, fuel economy reqs and to multi-viscosity, cold climate demands. If this is found disagreeable, We are back to the assertion above this first argument ________ RGT is an ILSAC GF-5 Oil and bound by GF-5. This is an Apples to Oranges comparison RGT is not a CK category oil So marketing - maybe a bit, but We still don't know. Is RGT a bit more viscous and does it have a bit more AW adds?' Is that enough to that validate the marketing for most consumers? Now the valid comparison should really be between QSUD (or PP) or M1 and RGT So, go at it again GOHKAN and let us come to a more valid assumption. But thanks for the work so far. It is thought provoking. -Ken
Last edited: Feb 8, 2020

Originally Posted by Mad_Hatter
Isn't it as VI goes up the volatility goes down?
I don't think it's entirely scientific (VI vs. volatility), but I have generally seen the opposite. An oil like Eneos Sustina 0W20 with a VI of 227 had a Noack of around 13%, while the Amsoil SS 10W30 with a VI of 147 has a Noack of about 4.7%. Others generally seem to follow this trend, even in one manufacturer's line of oils such as Amsoil SS.
L

Your premise is based on assumptions. Shell doesn't publish NOACK or HTHS values for these oils. The only thing we know is certifications met by each oil. RGT is the right choice for many since it meets SN+, dexos1 gen 2, etc. It's one of the thicker KV oils that is ILSAC in a 5w-30 and that makes me feel warm and fuzzy!

There are different quality VII's too.
T

Gokhan should also add why moving back from a SN Plus oil RGT - back to a SN oil RMV, suffers no consequences long-term to TDGI / GDI engines.
O

Gokhan Timely thread I can contribute to. Here is a link to a recent UOA on T6 5w-30 MV off a 2019 Subaru FB20 engine for one data point. https://www.bobistheoilguy.com/foru...t-rotella-5w-30-mv-5820-mile#Post5329420 I tend to use the same oil/filter a minimum of three times for data consistency so there will be at least one more UOA on this engine in about 6 months running T6 5w-30 MV.
You must log in or register to reply here.