M1, 15W-50 is always a good all around choice. With a nice robust HTHS of 4.5, it holds up to the heat. It also flows quite well during "cool" starts.

blupupher said:
I was joking. Just a jab at Kawasaki and Yamaha (I am a Honda boy).
I know different engine designs have different requirements. But as I said, I do find the chart odd in the cutoff temp for a xw-40 oil.
Click to expand... For me, the main decision for the oils I have settled on is how well the oil maintains shift quality over a longer OCI. I like M1 20w50 V-Twin from experience, however 10w40 4T does just as well. Ambient temps of 100 deg happen here in Colorado for about a month in late June thru late July, so 10w40 suffices very well. Looking forward to sharing my next UOA for M1 10w40 4T, from the ZRX1200. Currently right at 5,000 miles since the last change in Oct 2019. A previous UOA with that oil showed at 5,000 miles the oil had plenty of service life remaining (TBN 6.4), so I’ve told myself I’m going 6,000 miles this time. Hopefully another month or so and I will hit that mark. Shift quality remains high and the sight glass shows oil level right where it was when this OCI began last fall.

With all that has been said, 20w50 has no issue with flow at start up in summer temps so get the thought/worry out of your heads, and would be my choice if the consistent and brutal high temps were the same as what the OP sees in Nevada.
B

OP, I’d at least seriously consider a 20W50 for the service you outline, given the way the manual looks.

If there is one thing a motorcycle owner has control over its the
viscosity of their oil... whether you choose an 40 or 50 grade both
will meet and exceed your mileage expectations... however the freer
flowing 40 will show up as more HP on the dyno and show lower
operating temps than the 50... 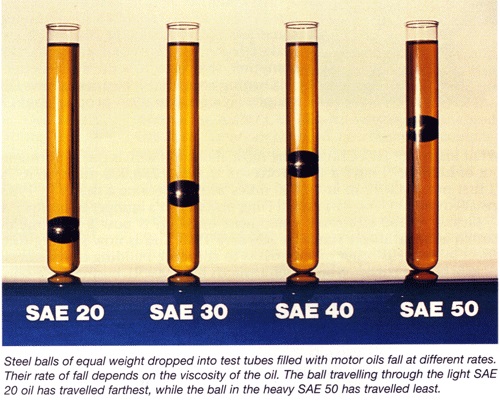 BLS, I agree with you there. I have seen lower hot summer engine temps on the needle (but not as hot as what he rides in) by a small amount with M1 10w40 4T vs 20w50 V-Twin. More so in that temps stay lower longer in stop and go or slow traffic, but temp still will rise to the point the fan will come on with either grade. No noticeable difference when moving at a steady speed. However, he isn’t on a dyno and a few hp up top is a minor element in why he should choose or not choose an oil for his situation. With that said, his ambient temps are really hot when he says they regularly exceed 104 deg. MOFT starts to lower even with the best 40wt, IMO. 20w50 is the choice I would go with based on 1) what Kawasaki says and 2) the basis of maintaining MOFT in extreme heat that is outside the regular realm of what most manufacturers expect, regardless of what Kawasaki says.
Last edited: Aug 3, 2020
A

Without question you should be using a 20w50 plus you have the added benefit of it in your owners manual. You run in an above "average" climate temperature, use the oil to reflect that, which would be like someone using a 10/40 in a northern climate.
Its a non brainer.
Forget the fact of water cooled vs air cooled, the comments on that are misguided, even if well intended. Your oil is not water cooled, oil temperatures do not run the same as coolant temperatures. Plus one last time, its in your manual but even if it wasnt moving up a grade is a wise choice.
W

We need to ask the viscosity of the HOT oil. Decades ago I drive a semi fora major corporation from San Francisco to the Los Angeles basin . climbing the Grape vine hill with a max load, it was always a max load , on mild days the temp and oil pressure gauges would barely move going up the hill on the scorching hot days the temps would climb and the oil pressure would drop. Can the bike be run hard enough and long enough to get really hot? I been thinking which is a bad thing to do.
B

Sure it can. They're designed to run in hot temps. And if your motor is in good condition whether it's a truck, car,or motorcycle, your oil pressure should climb with the RPM's of the motor. If your using the wt oil the mfgr recommends for the temp your operating in, I wouldn't give it second thought. Worry about something else.,,,
B

wpod said:
We need to ask the viscosity of the HOT oil. Decades ago I drive a semi fora major corporation from San Francisco to the Los Angeles basin . climbing the Grape vine hill with a max load, it was always a max load , on mild days the temp and oil pressure gauges would barely move going up the hill on the scorching hot days the temps would climb and the oil pressure would drop. Can the bike be run hard enough and long enough to get really hot? I been thinking which is a bad thing to do.
Click to expand...

What you were seeing with engine temp rising and oil pressure dropping, was the oil getting hot and thinning out. Thinner oil will give less oil pressure than thicker oil all else equal in the same engine. There is no inherent danger as long as oil pressure is within specs, but that it what you were experiencing. Post #6 is my experience with it in my bike.

I run Mobil super 1300 in my 2008 klr 650 with 84,000 miles HARD miles. Which is a 15/40 its a diesel oil, Kawasaki specs 10/40. I got it on sale at SamsCLub for $28 for 4 gallon, holds 2.25 quarts. I live in Arizona and it gets real hot and I can feel the shift quality deteriorate after about 2000 miles of adventure riding. I change the oil and filter at about 2000 miles, filters are $2.25 each in bulk so I'm under $6 for an oil change The cooling system is wonky stock there is an aftermarket housing with a bypass and different thermostats called Thermobob. Basically under 85 degrees it doesn't get hot enough and eventually eggs the cylinder, now this motor was designed in the 1980's so there's that. HEAVY loads, off-road slow abuse, WFO for hours on end on the interstate, its only good for about 90mp which will blow by a little oil for sure, the only time it ran hot other than under 40 mpg with a dead fan was running a crazy steep mining road in Death Valley the temp instantly went up doing that. I ran Rotella 5/40 T-6 in my Yamaha 1200 Super Tenere, good price and flawless performance. I would probably run the T6 again with a modern motorcycle. I run diesel oil in motorcycles to get away from the friction modifiers in car oil, they aren't good for the clutch, and Im cheap and the motorcycle specific oil is a fortune.
R

OP, I’d at least seriously consider a 20W50 for the service you outline, given the way the manual looks.
Click to expand...

10W-30 is specified for both of my motorcycles for all temperature ranges. I run 10W-30 in the 700 for local commuting. The bike does not have any gauges for temperature. Ignorance is bliss, I guess.

I run 10W-40 in the 1300. The 1300 gets the long haul freeway abuse. Hours at freeway speeds in hot 100 degree summer weather during long trips. No issues with the engine temp (according to the coolant temp gauge). Shift quality at temperature was fine over 5000 mile OCI, so I'm guessing the oil viscosity remained fine too.

The difference between my bikes and your bike is that your owners manual suggests that 20W-50 is better suited for the temperature in which you ride. I would follow the manual and use 20W-50 in your bike.

Ride_Red said:
10W-30 is specified for both of my motorcycles for all temperature ranges.
Click to expand...


Specifying a single grade for all temps is the growing trend among manufactures because they understand longevity is assured no matter the grade...
D

Given all the information in the original post, I would use 20w50. Yes the 10w40 will flow ever-so-slightly better at low temperatures/cold start, but not enough to make any difference, not in the owner's situation. The 50 grade operating temperature is key here because you are now riding in significantly higher ambient temps. Either one would probably work fine, but in your shoes, I would use 20w50.
K

If 20-50 conventional oil worked in 1975(Valvoline Racing 20-50), I would think that synthetic 20-50 in 2021(recommended by the factory) in the crankcase should do fine. I've never even used synthetic two-stroke oil since I haven't ridden bikes in years, and it worked fine also. I am remembering people using Castor oil? Maicos always smelled different since this seemed to be a thing with them.

Ahhh the smell of bean oil!
A

Any 20/50 but agree M1 Vtwin in your application would be really nice for shifting...
15/50 M1 standard Automobile oil good choice for the cooler weather.
I wouldnt be too comfortable running 20/50 m1 if I rode in temps below 50F in the winter.

I use Mobil 1 15w50 in my air cooled engine and have used it for many years now.
I have been in many hot areas and have had many cool starts in AL winter rides.
It has worked fine in all temps.

Increasing oil weight for hotter climate will only make your engine to run hotter with no increase in longevity...
You must log in or register to reply here.