Have you ever met anybody famous?

I met Peggy Fleming, the famous 1968 Olympic gold medalist ice skater, while buying a cup of coffee at Los Gatos Coffee Roasting. She lived in Los Gatos, as did my wife and me. This was a 25 years ago so she was in her late '40s. She was very sweet and kind, and just as beautiful as ever.

I met Joe Franklin just outside his restaurant in Manhattan about 15 years ago. He was a New York City area celebrity who was best known for his nostalgia show on WOR-TV from 1962-1993.

Kestas said:
I met astronaut Al Worden during family night at the SAE convention in Detroit. He flew in the Apollo program. He was a very short guy.
Click to expand...

CMP on Apollo 15. It's crazy to think that was just over 50 years ago, July I think.

I flew down to the Cape with five buddies for the Skylab 2 launch in July 1973. My one friend was a pilot, and we rented a 6-seater twin. 43.5 hours, Edmonton to Florida return. We met up with two other friends there, who had flown down commercial. Anyway, three of us were hitchhiking, and this convertible stops and the crewcut driver offers us a ride. It was astronaut Deke Slayton. He had recently been cleared to fly, and we congratulated him. (He had been grounded during Project Mercury due to a heart murmur. He flew the Apollo-Soyuz mission two years later.)
R

I was at the Cincinnati Oktoberfest just before they were shutting down for the night, with my wife about ten years or so ago and walked up to the row of port-o-lets, nobody in line but they were all locked and full, finally I heard one unlock and I stepped over to it as the door opened, the guy inside stepped out and held the door and said "Here you go" and I said thanks, and I looked at him and it was George Wendt (Norm from "Cheers"). Wife got a selfie with him.

About 20 years ago I was at Kings Island, while we were waiting for our kids to get off a ride, my wife leans over and whispers "I think thats George Clooney right next to you". I look over, yup, it was George Clooney about 10 feet away. I go into the office the next day, full of bravado and tell the girl I worked with how I was standing next to Clooney at KI.. she smiled and said "You know he used to live right down the street from here, I went to a homecoming dance with him in high school" and I said "Yea, right. Pictures or it didnt happen". She brought in two pictures the next day, yup she one upped me on that one.

There's been others....
Eddie Money, he was packing equipment up after a gig at a food festival near our old house, walked right up to him.. really nice guy.

Eric Brittingham, bassist for Cinderella, ran into him at a bar in Oxford Ohio. I didnt even know who he was, but my friend was a huge Cinderella fan and was practically having a heart attack. Super nice guy. Got a selfie with him. Same night, same bar, Bret Michaels (of Poison). They had just finished a gig next door. Bret was very friendly, shook my hand, said "let get the party started!" and I said "yea, lets go!", but he must have a short memory. I walked around the other side of the bar, and ran into him again not 30 seconds later, and I said "hey Bret" and he reached out his hand and said "Hi, nice to meet you!". I must have left quite the impression half a minute earlier.

Davy Jones, of Monkees fame, while getting on an elevator. He was tiny, but his handshake could crush diamonds. Super friendly.

Phil Keoghan, host of "The Amazing Race" while waiting in line at a movie theatre. Nice guy, very talkative.

Rick Harrison (Pawn Stars), got a picture with him at the custom car show at the convention center downtown a few hours earlier, then after the show the wife and I were sitting at a bar at the hotel next door, and he sat right next to us. Not too talkative. The bartender said his sons had been in there and said they were super nice, bought everybody at the bar a round. Not Rick.

clinebarger said:
Chuck Norris in the late 90's at the Cattleman's Steak House in the Fort Worth Stockyards....They were doing shoots for Walker, Texas Ranger.
Nice guy!
Click to expand...

I wonder if this was the same time that he was shooting an episode on my street, near downtown Dallas. I came home from work and there was a Tempo / Topaz flipped over in the intersection, and a whole film crew surrounding the car. There was Chuck, standing amongst it all. Watched some of the action from the stairway balcony. This would've been Sept, maybe Oct 1999.
D

Most famous person I met would probably be Clifford Stoll, author of "The Cuckoo's Egg" (good book, BTW). He's a ham radio operator, and met him at the Dayton Hamvention once.

At one point I worked for a world famous CEO and his world famous successor, his successor hold the door for my preschool age daughter when we were entering the garage.

Ive met a couple. Once at the Columbus airport I met Jack Hannah. Cool dude and he was exactly what you would think he would be.
I was also at a Whole Foods in Madison, WI one time and met Mark Johnson. For those who dont remember who Mark Johnson is, if youve even seen the movie, "Miracle" or know abouth the miracle on ice; you know of him. He's the one who scored the goal that beat the Russians. He's also been the head coach of the greatest womens' hockey team in the world: the Wisconsin Badgers.

I mentioned this thread to my Better Half and she brought up two more, albeit it was our then young Daughter that actually had the 'meet';

1) Mystic CT, on the porch of S&P Oyster (one of my all-time favorite restaurants if you are ever there) waiting for a table. Our 4 year old, who while polite, isn't shy. She wound up in a full conversation with an older couple telling them all about her day at the Mystic Aquarium, it was Hugh Downs and his Wife.

2) Two years later, we are at a little bakery on Shelter Island, NY. In line and our Daughter was doing something and swung her hand out just as the person in front of us took a step back. She lightly backhanded Brendan Fraser on the backside... He looked over and smiled. I didn't recognize him, but my Wife did....at least I am pretty sure it was him.

methusaleh said:
I was raised in the music industry thanks to my mom, so I’ve met most of the big names from the 70s-90s. I was a performer who did some touring in the 90s as well.

Though I never met either of them, my mom’s clique always said that Prince was by far the nicest person out of all of the super-famous performers.

My mom was a huge Rolling Stones fan and said that Mick Jagger was either your best friend or your worst enemy. Sounded like he had frightening mood swings even without provocation and while totally sober.
Click to expand...

How about Sammy Hagar? Have you meet him?

I'll begin with famous to me people I met while living in Japan...

Hirotoshi Honda president of Mugen his dad is none other than Soichiro Honda the founder...
this was taken in 1980 Mt Fugi racetrack Japan... 
Saburo Sakai Japan's leading ace who survived over 200 dog fights and
scored over 64 air victories and he was still feeling cocky as he signed
my book and oil painting at Yakota AFB...

Sakai san asked me "where did I get this painting?"

I commissioned a artist while TDY in the Philippines, I answered.

"Philippines?" he exclaimed with pride. "we conquered the Philippines".

Sakai sustained serious injuries from the return fire of Avenger rear
seat gunner. He was hit in the head by a 7.62 mm (0.3 in) bullet,
blinding him in the right eye and paralyzing the left side of his
body. The Zero rolled inverted and was descending toward the sea.
Unable to see out of his uninjured eye due to blood from the head
wound, Sakai's vision started to clear somewhat as tears cleared the
blood from his eyes, and he was able to pull his plane out of the
dive. He considered ramming an American warship: "If I must die, at
least I could go out as a Samurai. Finally, the cold air blasting into
the cockpit revived him enough to check his instruments, and he
decided that leaning the fuel mixture he might be able to return to
the airfield at Rabaul. Rabaul, 8 August 1942: A seriously wounded
Sakai returns to Rabaul with his damaged Zero after a four-hour,
47-minute flight over 560 nmi (1,040 km; 640 mi). Sakai's skull was
penetrated by a machine-gun bullet and he was blind in one eye, but
insisted on making his mission report before accepting medical
treatment. Sakai was evacuated to Japan on 12 August, where he endured
a long surgery without anesthesia. The surgery repaired some of the
damage to his head, but was unable to restore full vision to his right
eye.
The book Samurai... 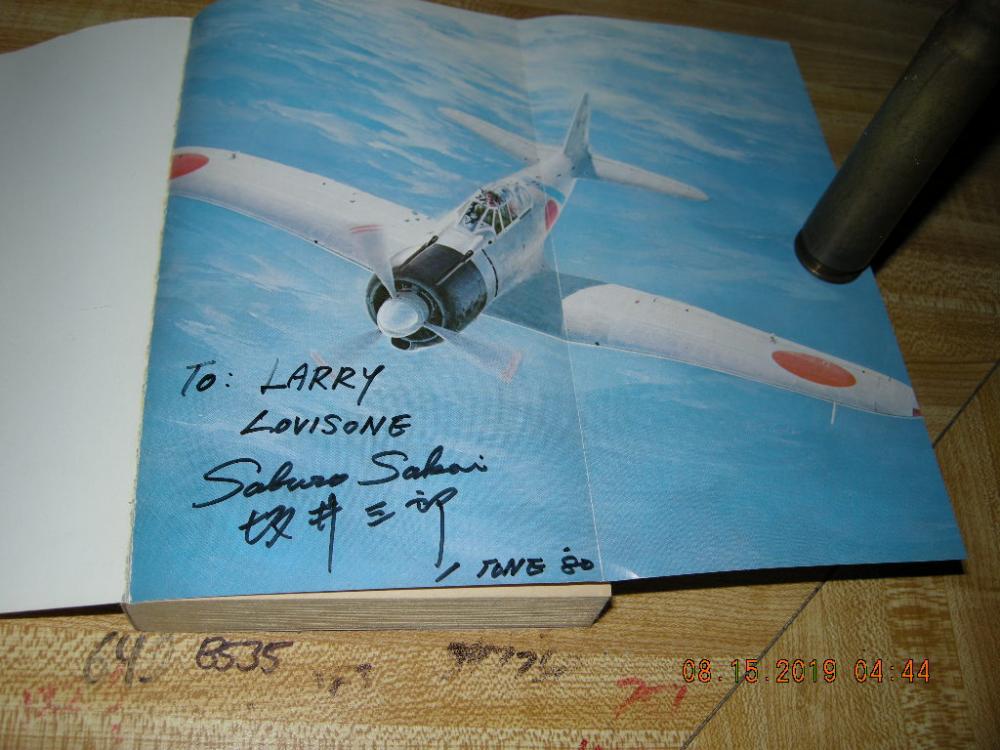 Dunno if it counts, but I briefly met and got a cd autographed by Brian Fair of the metal band Shadows Fall when I was 16 or 17; circa 2005.
9

So hear it goes, ... I worked for a hotel for 7 years and I've met Ziggi Marley (his assistant invited me on their tour bus after fixing their laptop wifi problems, then was told the bus was full ... rats) A guest in the parking lot dropped his briefcase and stared. Should have got a picture. Scott Kirkland and Ken Jordan from the Crystal Method. I convinced the sales manager to contact their booking agent and get them to stay. Super cool guys. Infected Mushroom. A retired Denver Broncos player, but didn't know who he was. Steve Dinan of BMW tuning fame, shows up as he booked a room for an employee. Funny thing was Nobody in the hotel lobby knew who he was.Questlove and the entire Roots Band (Jimmy Fallons tonight show group). Some quasi famous country music singer, playing at a venue in Denver. A famous UK rap star not famous in the USA. DJ gunslinger.
9

Oh yeah A retired U-2 and blackbird pilot.
D

Steven and Liv Tyler were in front of me in line at a gas station a few years ago. That was interesting.

I’ve met a few hockey players over the years...Adam Oates and Cam Neely.

Sadly, all the famous people I've met over the years are no longer with us:

doublebase said:
Steven and Liv Tyler were in front of me in line at a gas station a few years ago. That was interesting.

I’ve met a few hockey players over the years...Adam Oates and Cam Neely.

No, the other one. From Ireland.
You must log in or register to reply here.

Don’t mistake my kindness for weakness
2