Hello BITOG! My father, brothers and myself went away this weekend to see a MLB game. We got a rental car for the ride just for the fun factor. I went to pick it up my "premium car" through Enterprise yesterday morning and they asked me if a hardtop Camaro would work. I asked them if they had any 4 door sedans since I had 3 passengers plus myself. She looked and then said they had a 2017 Volvo S60, BRAND NEW with only 2 miles on it. I said sure, that will work. I don't know a whole lot about Volvo other than they seem to be putting 2.0 Turbos in most of their line up. I figured the S60 was either a mid size sedan or their newly redesigned crossover. I got out to the parking garage and saw it was a fairly small car, probably the size of a Civic. I was a little disappointed with the size but was glad I was getting into a more luxurious option than what I had originally expected. I got in it and saw it was nicely appointed, nice materials and lots of tech. I got about 5 miles down the road then looked into the back seat and saw it was pretty cramped, and that my brothers were probably not going to be thrilled with having their knees in the back of the front seats for 5+ hours. I then made a call back to Enterprise and asked it they could hook me up with something larger, she checked and said they could get me into a 300. I was a little "hem-haw" with that option since I was in an entry - mid level luxury car "downgrading" to a Chrysler 300 (in terms of luxury), but I said yes since I knew it would be more spacious, and at least I would get a more beefy engine (2.0 turbo in the Volvo left a bit to be desired surprisingly). I made my way back to the airport to switch out the cars and she gave me a Dodge key fob, great! What am I getting now? I walk out to the lot and see a Charger sitting there....hmmm, I've never driven one of these before...this could be interesting. I was at least glad it was a more sporty option than a 300. I opened the door and saw it was a lower tier model (SXT), so that was disappointing but I got out on the road and was pleasantly surprised by the power. It was equipped with the 3.6 Pentastar and the ZF 8 speed auto and that combo moves the big sedan out nicely! I was pleasantly surprised. Most of the trip was spent on the interstate so the drive is pretty boring, but the engine has nice low end torque that made for easy passing. The trans would typically drop down from 8th to 7th and passing was no fuss no muss. I did notice though, if it dropped down from 8th to 6th it would usually be accompanied with a clunk that was heard and felt in the cabin. I was pleased with the gear spacing, none of the gears seemed to long or too short, and this allowed the car to make the most use out of the engines power in all circumstances. At times the trans would have a slight delay after pressing the gas down to speed up quickly then when letting off the revs would hang for a while before it decided to upshift. Also, at times the trans would decide to clunk when shifting. It wasn't a violent clunk, but certainly noticeable. Overall though I was pretty impressed with this 8 speed ZF unit and 99% of the time it provided very smooth and appropriate shifts both in tame and aggressive driving. I would like the shifts to be more snappy though, I am used to driving Hondas and the VW in my sig, they are more snappy and less slushy when shifting. Steering was average, it is nicely weighted both around parking lots and on the highway, but not much feel as expected. Braking was confidence inspiring, no mushy pedal and braking started as soon as you pushed the pedal down, it was pretty responsive and was easy to modulate. The suspension was tuned well also, for such a large car it was well controlled. Not too floaty on the highway, but it also was able to soak up bumps well without being unsettled. The most disappointing thing to me was the interior. I appreciated that most surfaces you touch often were soft, but I was not a fan of the graining of the materials and they didn't seem to go (match) together. Most of the dash and door panels were a strange elephant skin looking material and some of the plastics on the control areas were a flat black cheap looking plastic that should belong on some cheap toy. I wasn't a fan of the styling of the dash or interior door panels, but that is subjective. I do however love the styling of the exterior. It is very masculine and mean looking. Overall I was very impressed with this large rear wheel drive American sedan. Great power delivery, good MPG, smooth ride, looks good etc. It made for a fine road trip car for sure! *Side note about rear seat leg room, it was lacking when compared to my Accord which is a smaller car. The Charger has a 10" longer wheelbase and is 6" longer overall than my 2012 Accord sedan, yet rear seat leg room was much less. That is something Honda has always excelled at, making the most out of interior volume. 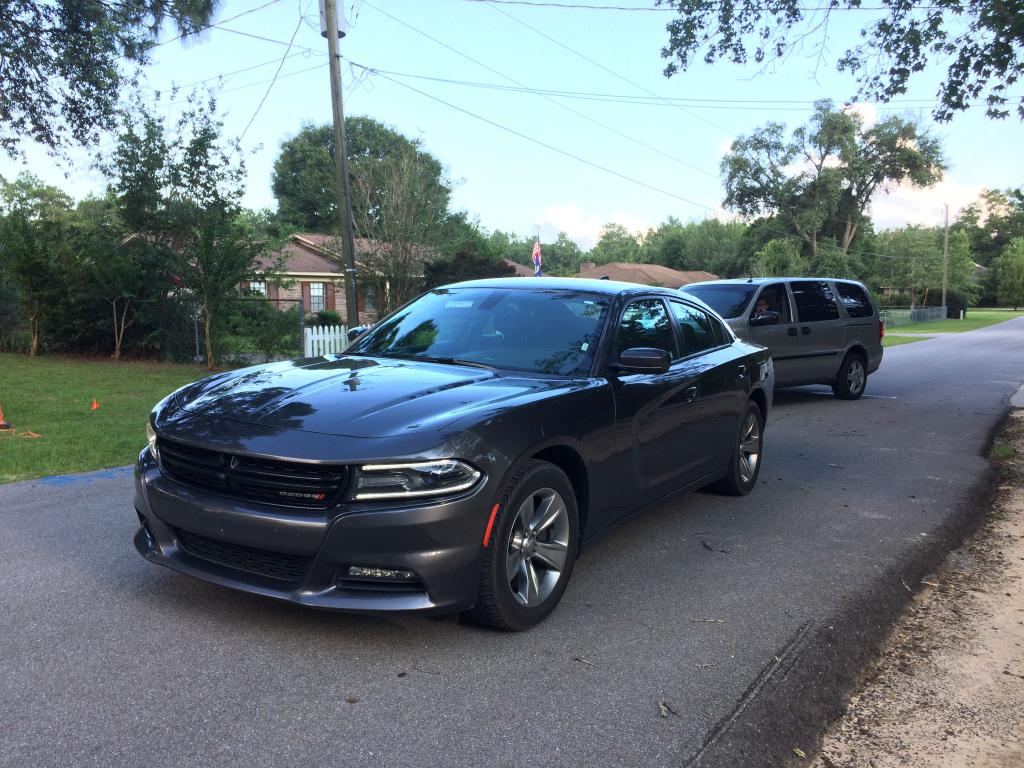 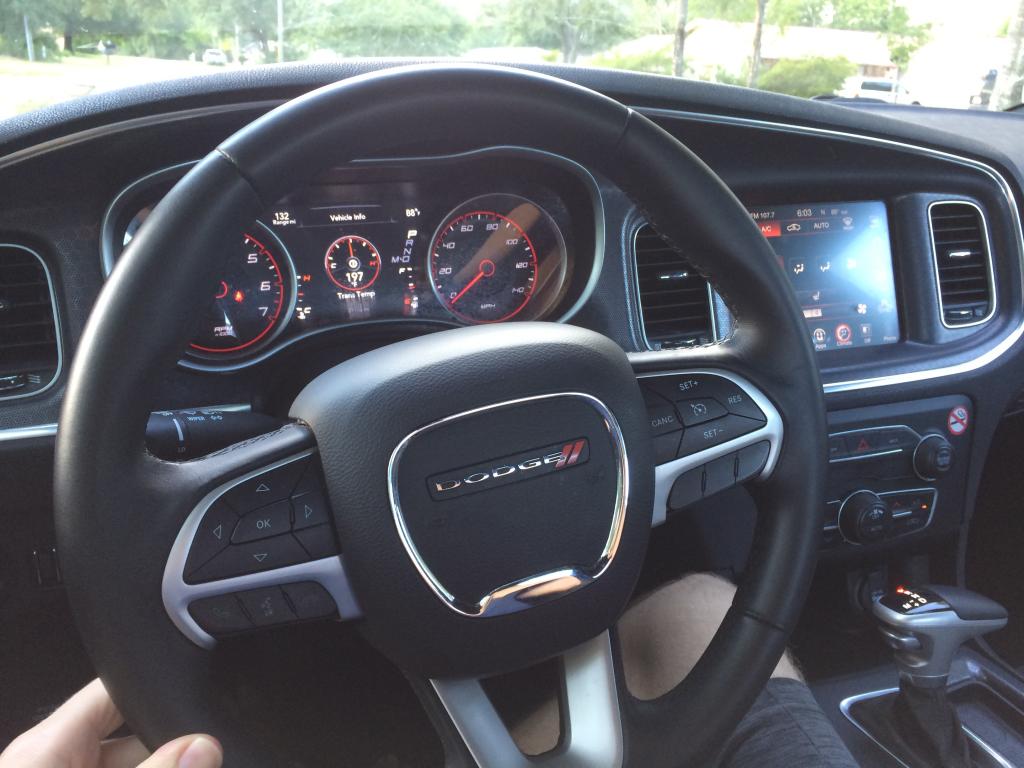 Do they have stop/start in them?

Originally Posted By: demarpaint
Do they have stop/start in them?
The Charger did not have start stop, maybe other models do? I'm not sure. The Volvo did however, and it uses the actual starter every time you come to a stop, it was quick to start but man thats a lot of extra wear on the starter.

Originally Posted By: gregk24
Originally Posted By: demarpaint
Do they have stop/start in them?
The Charger did not have start stop, maybe other models do? I'm not sure. The Volvo did however, and it uses the actual starter every time you come to a stop, it was quick to start but man thats a lot of extra wear on the starter.
Extra wear on the starter for sure. I was recently next to a new Volvo on Sunrise Hwy in NY, a busy road. We road side by side for a while, in moderate traffic. The turning on and off would drive me nuts. I'd want to disable for good if I owned a vehicle with it.

No start stop in the Charger is a plus in my book.

Thanks for the review and pictures. I value bitog reviews more than those from C&D, M/T and Automobile magazine. Fine work man!

Good review! Have to say the new front end in growing on me....

I bet you would've liked the 300 much better interior quality wise. To me Charger's interior feels way too cheap. The platform is ancient, so it should've paid for itself long time ago leaving budget for a more premium feeling interior IMO.
Last edited: Jun 25, 2017

Originally Posted By: KrisZ
I bet you would've liked the 300 much better interior quality wise. To me Charger's interior feels way too cheap.
Agreed. I've rented both, and preferred the 300's interior. Also, the trans programming on the 300 seemed more sorted out and more eager to upshift when requested.
J

The transmissions learn...on a rental, it's luck of the draw what it has learned.
Last edited: Jun 25, 2017

Originally Posted By: Jarlaxle
The transmissions learn...on a rental, it's luck of the draw what it has learned.
Yup, this is true. The OP would find firmer shifts on an R/T trim model, which are then again significantly firmer and faster on an SRT when in "sport" mode.
J

Originally Posted By: gregk24
Originally Posted By: demarpaint
Do they have stop/start in them?
The Charger did not have start stop, maybe other models do? I'm not sure. The Volvo did however, and it uses the actual starter every time you come to a stop, it was quick to start but man thats a lot of extra wear on the starter.
Regular starters are rated for 50,000 starts, the uprated starters in start-stop vehicles for 300,000 starts. So if your car stops the engine 5 times or more during a normal commute it's best to disable start-stop.
S

How many miles were on it?

Originally Posted By: SatinSilver
How many miles were on it?
Picked up with 38K, dropped off with 39K.
V

This was the same one which I drove and wrote about here in the past. The last vacation I rented Pacifica van and I was NOT thrilled with it. The 9-speed transmission in the van vs 8-speed transmission in the Charger are like night and day. For some reason, even thought the engines are identical, it just did not seem to put out as much as the Charger. The transmission shift point programming was atrocious. Even when revving at 5K+, there seems to be lot more noise that the forward propulsion. The Charger drive train had impressed me quite a lot but with Pacifica drivetrain I was not happy at all. It had 23K on the clock and would have assumed all the TSB been already applied.

The SE is the entry level, not the SXT. The SXT is their top offering with the 3.6 I had a 2014 SE that I thought was great. I put 52k on it in a year and a half without hardly an issue although the clunk or hard shift you mention in your review was present in my car as well at times. And yes it did seems to dissapate a bit the more the transmission learned my driving style. Smooth riding and fast. I had the sport suspension package and even with the 20" tires it had a nice ride The only minor complaint I may have has was that fuel pumps which were located under the rear seat could seem a little noisy. After a bit I got used to it Great comfortable cars..... In fact I may be in the market for one a bit later in the year if I can find a leftover once the 2018s are on the lot The NH State Police run Chargers
A

Have the front end issues with these cars been addressed?
J

Yes: if anything fails, use replacement parts for the SRT8. It will be a lifetime part.
G

Originally Posted By: double vanos
Thanks for the review and pictures. I value bitog reviews more than those from C&D, M/T and Automobile magazine. Fine work man!
I agree! Thanks for the write up 24!