Which Premium Oil To Offer?

Long time lurker, first time poster... I've gotten a lot of great information here over the years and would appreciate your feedback.

I own and manage 5 full-service repair shops in the Minneapolis area. I've recently switched over our LOF services to only offer full synthetic oil and discontinued blended oil for multiple reasons but mostly because of the labor shortage and needing to extend the oil change intervals from 3k to 5-6k so we see customers less often and I can have skilled technicians perform the oil changes and inspections. Currently we use a quality generic oil from a regional distributor. What would you suggest would be a good premium brand to offer as an upsell? Mobil 1? Valvoline? Castrol? Amsoil? Other?

Our current distributor also has Mobil 1 and Castrol available. The Valvoline rep is asking for my business but I don't really want to advertise for their branded oil change centers. One of my buddies that manages a couple stores recently went with Amsoil. Prior to being in this business when I did my own oil changes in my garage laying on the floor, I used Mobil 1 on all my personal vehicles. Just looking for some feedback on what you think would be a quality product that you would pay a premium for if you were my customer.

Edit: I would also consider a high mileage oil as an additional offering. Please offer up any suggestions!

I like Valvoline EP even if it is not your cup of tea.

Otherwise Mobil 1 anything is a good choice.
W

Mobil has brand name recognition and M1 is a really good oil.

Most people won't care. Whatever major brand name is cheapest IMO. If I was forced to pick one... M1.

I would use whatever synthetic I could buy in bulk for a price that makes good business sense.

IMO Mobil 1 has the strongest branding.
B

Think I would have 2 premium synthetics-something similar to the Duramax that’s being discussed on here (~$50/6 gallon box for Dexos 1 Gen. 2) & something like Mobil 1, for a little more $.
C

Mobil 1 for the same reasons as above. I agree with you, don't choose Valvoline because then it doesn't differentiate your shops enough from the Valvoline Instant Oil Change shops that already exist.

Mobil has brand recognition. Amsoil is obviously a top-notch product, but it's a niche brand that's more for the DIY or motorsports oriented crowd. Regular everyday people on the street have never heard of Amsoil.

Also I'm not sure if tons of people would make this connection, but if you have Jiffy Lube in your area, then they're a Pennzoil (Shell) company that advertises their exclusive use of Pennzoil, so that's a softer version of the Valvoline issue.
K

Marketing and price points. A real Pandora's Box. Select a product you are willing to stand by. Educate your customers. On a new car I am brand loyal through the warranty period at a minimum. But I imagine many are after the lowest price and they will return 1,000 miles past the recommended change interval.
S

Ditto. It's the factory oil recommendation from Mercedes for their cars, has a sticker under the hood recommending Mobil. Do you get many Mercedes coming in? They like 0w40. People on the Mercedes forums also like Castrol but as others said Mobil 1 has better name recognition and it's what you think of when it comes to synthetic oil.

I think you'll be happiest if you use the product offered by the best distributor. Any premium brand will have it's proponents and detractors. All you have to do is read this forum to see that. If you offer a brand name that people recognize, 99% of customers will be satisfied.
Assuming prices to be similar, find the distributor that causes you the least pain. When working with prospective customers, we were told to "find their pain." Then we could address any dissatisfaction they may have had with their current distributor.
I'd consider inviting your area distributors to submit bids for your business. With five stores, you'll have some leverage to get what you want and need. Also ask around to any other folks you know in your business what their experience with their distributor has been like.
Good luck.
D

People recognize Mobil1, they won’t recognize Amsoil. Yet I have seen shops carry Amsoil as their premium oil. I have also seen people post on town Facebook pages about getting screwed on the cost of their oil changes the shop charged while putting Amsoil in it. Which can’t be good for business. And then the shop has to explain to an entire community why it cost so much - and that doesn't go well because most people don’t know or care about PAO, esters or whatever - they care about brand recognition, price and that’s about it. As a shop owner I wouldn’t want to have to explain this stuff to customers over and over again.

Yet I like Amsoil, and would use it in my cars.
K

"Up there" in Minneapolis are there brands which have been around longer?

I agree with the logic behind those behind Mobil1. Let's hope mentioning it's 'Mercedes oil' doesn't scare 'em away either.
Amsoil's prices will.

You must assure your customers that they're getting whichever real deal you're offering and you gotta rely on your managers / staff to sound convincing and truthful when they pitch.
You said you're leaving semi-synths behind. That means you likely started the product conversation with many customers, no?

I agree you should go with the distributor that services the best. I would happily accept any of the brands you listed in my car. Go with the best service & price regardless of what is on the label.
C

doublebase said:
People recognize Mobil1, they won’t recognize Amsoil. Yet I have seen shops carry Amsoil as their premium oil. I have also seen people post on town Facebook pages about getting screwed on the cost of their oil changes the shop charged while putting Amsoil in it. Which can’t be good for business. And then the shop has to explain to an entire community why it cost so much - and that doesn't go well because most people don’t know or care about PAO, esters or whatever - they care about brand recognition, price and that’s about it. As a shop owner I wouldn’t want to have to explain this stuff to customers over and over again.

This is why in my opinion, Amsoil would be the best offering if we were having this discussion about a powersports shop. Motorcycle and ATV owners are more likely to recognize the brand, but even the ones that don't instantly recognize it would often be receptive to that type of product education and spring for the up-charge, because they have passion for those vehicles.

Regular automotive customers just want to pass emissions, be safe, and not get stranded. To me, trying to up-sell Amsoil to the average automotive public sounds like a very uphill battle because they'll have no idea what they added cost is about and they won't understand (or care) why it matters if the cheaper oil is considered good enough anyway.

And since both the high and low offerings at these shops are going to be synthetic, you can't even position it as a typical, "do you want the conventional oil or synthetic?". It's more like, "do you want synthetic oil A or synthetic oil B?". That's a tougher sell in my opinion because they sound the same to most people. Synthetic oil B better bring something to the table in the eyes of the average customer, or else customers will just be confused as to why there's even a choice. Mobil 1 as a trusted brand would bring something to the table at least that's easily digestible to the most amount of customers.
T

Amsoil doesn’t have any Dexos certifications, many new cars regardless of brand require a dexos cert. it’s the only reason I choose mobil1 over amsoil for my (under warranty) cars. As a business Mobil 1 have much better name recognition as well.
N

See if you can get WalMart to give you a deal on their oil. Chances are lots of the customers will recognize and feel comfortable with your oil inventory; 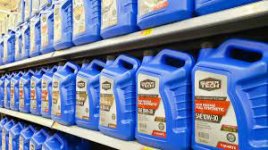