Click here to read about the rarest of the rare 300 letter cars. 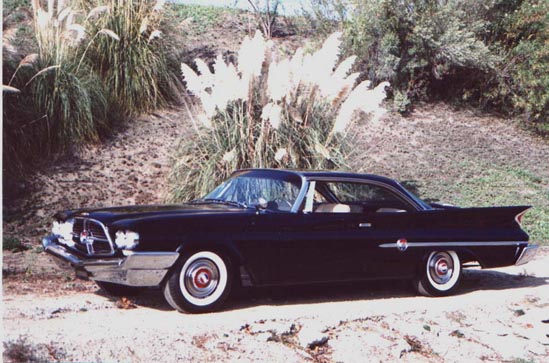 If DCX would build one today, I would buy it!

I also mean the styling! Chrome, Fins 10mpg and everything. But, they won't. Too many people would kill themselves and others, aiming it!

These bad boys weren't necessarily gas hogs. My dad had a 1960 Chrysler Windsor with the police package that had a 383 with a dual 4bbl cross ram set up similar to what was used on the 300F (see pic below). That car would get a solid 18 mpg on the Interstate running 75-80 mph.

I went to Barrett-Jackson in January. A friend sold his 300G convertible at the auction and a bunch of us went out there to be with him. While there we visited Don Petty, who for those of you who don't know is Richard's brother. He has one of the original seven white 4-speed cars that were actually raced at Daytona. We saw that car along with numerous other letter cars that are ready for restoration. As I understand, the black car above and a convertible were the only two originally sold to the public. As the 400 HP engines were pretty radical (as you can see) Chrysler did not want them in the hands of just anybody. With the introduction of the 300M and now the 300 Hemi C a lot of prople who weren't aware of these great cars have gained a lot of knowledge and respect.

Russ, I've been meaning to ask you if the 300H in your name meant you had a 62 letter car. Before the Germans took over Chrysler the plan was to continue the letter series in succession with the next iteration of the 300 after the M being the 300N. How they ever came up with naming the entire line-up "300" and then having the performance version be the 300C is beyond me since "C" was used in 1957.

quote:Originally posted by Russ300H: As I understand, the black car above and a convertible were the only two originally sold to the public.

Yes, they were the only two "Specials" with the 400 HP engine and 4 spd tranny sold to the public. They were both special orders, too, since there was never any plans to produce any Specials with factory AC or a convertible Special.

FCA and Foxconn partner on EV's