Here are my two babies from a few summers ago. The 1979 CBX and the 2012 ZX14R. It is simply amazing how far the development has come. The mighty CBX is no match for the modern 14R when the throttles are twisted. 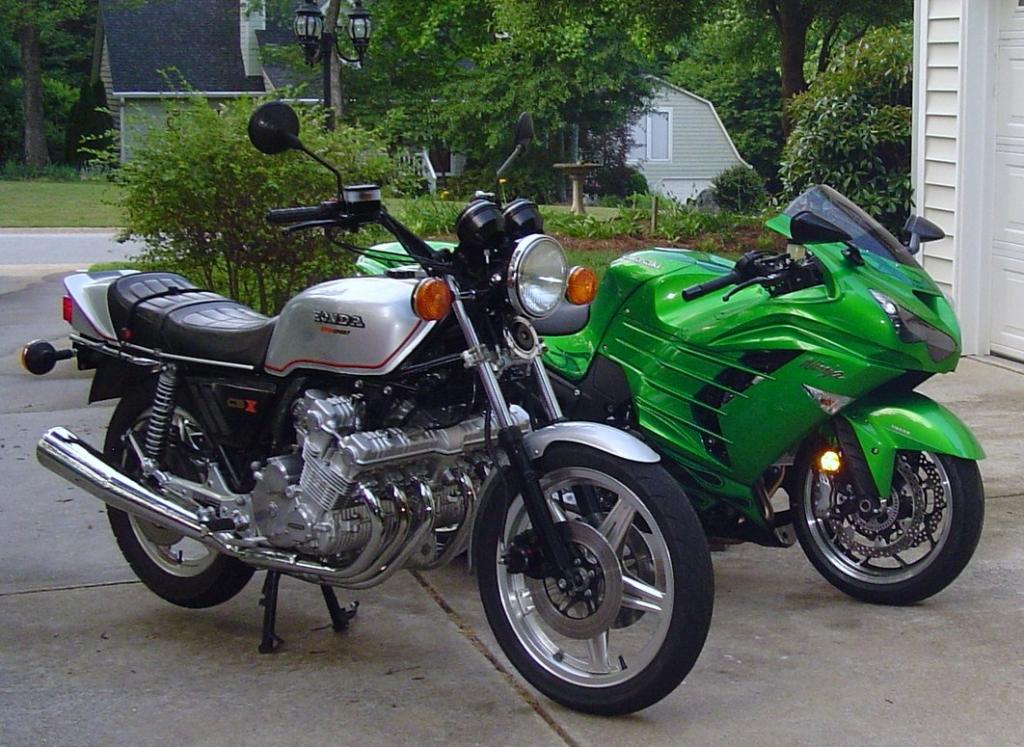 While the old CBXs are cool, they had just about half the horsepower of your ZX-14R. Quite a contrast.

Originally Posted by FowVay
Here are my two babies from a few summers ago. The 1979 CBX and the 2012 ZX14R. It is simply amazing how far the development has come. The mighty CBX is no match for the modern 14R when the throttles are twisted.

That bike was the reason they implemented a 100HP limit on bikes in that era, now its long gone and there was always a way around it legally. I bought a new VF1100C in 83 to replace my last owned HD that was more powerful than the CBX. Like the VF the CBX was anything but a good bike when all the parts came together as far as handling and braking went.
A

Straigh sixes are Cool, but come on too big a motor for a bike for various reasons. I would like to put that in the front end of a 70s Ford Fiesta though! Or Replace the aircooled twin on the Honda Z600 mini car with this I6 ! The younger folks on this forum likely don't recall the Honda's first real try at marketing car in the U.S. But It was a semi-fun grocery getter and city car but that's about it. Photo Below. 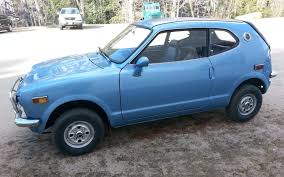 I should have titled the thread classic muscle bikes because there are more examples of the era worth mentioning such as the GSX1100SBE Katana.
They're making a new Katana. A lot more power than the original. 2020 Katana
The new Katana is a nice bike with the previous generation GSXR 1000 engine. They kept a lot of the look but gave it a tiny bladder as far as fuel capacity goes. Geez, couldn't they have found a place for another gallon?
I

TBH I dislike retro-modern cars and bikes, to me the lines represent a time capsule in engineering evolution and replication seems a contrived effort to grab former glory (sales/prestige).
I

Quote
would like to put that in the front end of a 70s Ford Fiesta though!
HA! I have a 90's Aspire languishing about and was thinking the exact same thing for the Kawasaki 1300!
R

I had an 81 model. Did all 6 carbs once, wasn't too bad. Mine had the factory bags and the larger stiffer front forks. They spent more time engineering the motor than the chassis on the first one's, and had to turn it into a sport-tourer. By then the sales were down and they were giving them away to moto mechanic schools. Sad ending to a wonderful design.
B

For sure, the new bikes are a thinly done retro look, however they still have to sell them to this age of riders. Wasn't trying to imply that it was anywhere near the original, other than they kept a lot of the look in the body shape and general idea but from a performance perspective it does pretty well.
0

Originally Posted by Bonz
The new Katana is a nice bike with the previous generation GSXR 1000 engine. They kept a lot of the look but gave it a tiny bladder as far as fuel capacity goes. Geez, couldn't they have found a place for another gallon?
Agreed. I didn't notice the fuel tank capacity until you mentioned it. 3.2 gallons would be a constant source of frustration for me, where I ride.

Originally Posted by ZeeOSix
Originally Posted by FowVay
Here are my two babies from a few summers ago. The 1979 CBX and the 2012 ZX14R. It is simply amazing how far the development has come. The mighty CBX is no match for the modern 14R when the throttles are twisted.

From the looks of the video the rider is avoiding older retro bikes on the track course...... I remember the 1978 CBX well when they came out. What is there not to like?
S

Another story from back when they were new. We used to know a guy who was what we call here a BS Artist - y'know, the Jag was in the shop getting a new engine, and he'd turn up in his ''brother's'' Morris Minor. Anyway, we had a 6 hour production bike race...and one day he turns up on an old CB350, because he was racing his CBX in the 6hr, and on the last lap the oil light came on....he was in the lead and tried to push to the end, but it seized with a couple of corners to go. A couple of weeks later I'm in a local bike shop, and one of the mechanics has a CBX engine on the bench. I asked what happened to it - ''Ran out of oil on the last lap of the 6hr.'' I asked who the rider was - yeah, guess who ?
I

A 6 hour race solo or with multiple riders? Interesting. Was it a Harris framed bike?
S

A production bike race, the CBX was just released months earlier, so doubt there would be a Harris frame for it at that time. I guess a team of 2 riders, I didn't take an interest, not my scene then or now. I just remember thinking at the time, wanker...and then finding out it really was his bike.

Guess the never checked the oil level during pit stops. Or else it sprang a leak and smoked itself.

I live in Japan 79 to 81 courtesy of the USAF... I routinely visited Honda's Saitama Factory where the CBX was produced... The CBX was not only their pride and joy but more importantly held the status as their number 1 bike... Each bike was assembled by a select team of their finest workers... If a fork leg some how became scratched it was no longer worthy of their number 1 bike and without pause it would be scrapped and replaced... the fork would sent to Pops smelter and be returned as a block of aluminum... Ever CBX upon completion was rolled into the green dyno room... they would run the engine to red line and go up the gears and number of times... 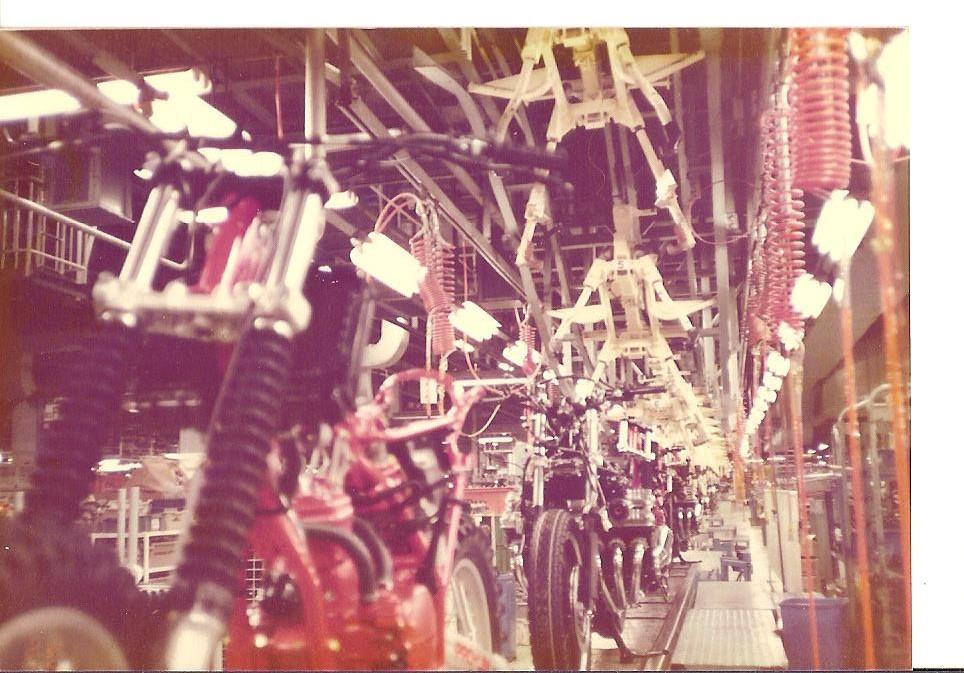 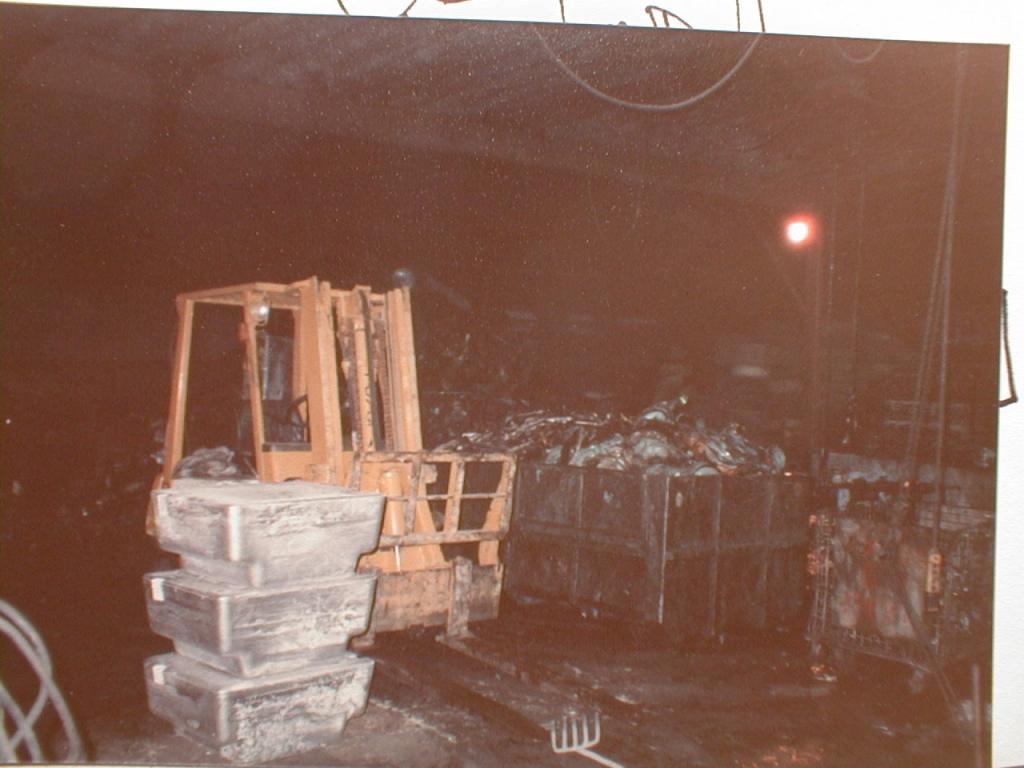 I bought a new '79 CBX in '80 (a red one). The dealership I bought it from still had one in the shipping crate, and they wouldn't budge on the price. I paid $3750 for it, which was a lot for a bike in 1980. It didn't make much power down low, but once you got the RPMs up, it would scream! The craftsmanship on that bike was impressive!
You must log in or register to reply here.

For the Rock Music Fans Here

May 2, 2020
Jackson_Slugger
I
The Psychology of Sport Greatness