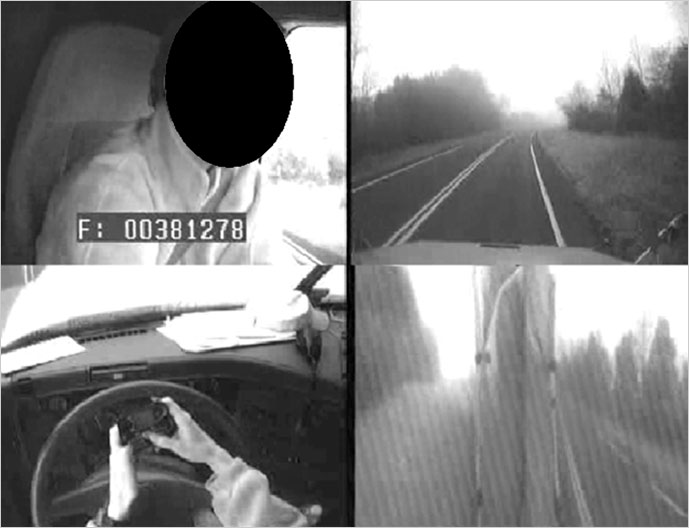 The first study of drivers texting inside their vehicles shows that the risk sharply exceeds previous estimates based on laboratory research — and far surpasses the dangers of other driving distractions. The new study, which entailed outfitting the cabs of long-haul trucks with video cameras over 18 months, found that when the drivers texted, their collision risk was 23 times greater than when not texting. The Virginia Tech Transportation Institute, which compiled the research and plans to release its findings on Tuesday, also measured the time drivers took their eyes from the road to send or receive texts. In the moments before a crash or near crash, drivers typically spent nearly five seconds looking at their devices — enough time at typical highway speeds to cover more than the length of a football field. Even though trucks take longer to stop and are less maneuverable than cars, the findings generally applied to all drivers, who tend to exhibit the same behaviors as the more than 100 truckers studied, the researchers said. Truckers, they said, do not appear to text more or less than typical car drivers, but they said the study did not compare use patterns that way. Compared with other sources of driver distraction, “texting is in its own universe of risk,” said Rich Hanowski, who oversaw the study at the institute. Mr. Hanowski said the texting analysis was financed by $300,000 from the Federal Motor Carrier Safety Administration, which has the mission of improving safety in trucks and buses. More broadly, the research yielding the results represent a significant logistical undertaking. The overall cost was $6 million to equip the trucks with video cameras and track them for three million miles as they hauled furniture, frozen foods and other goods across the country. The final analysis of the data is undergoing peer review before formal publication. NY Times - free registration required to view full text
U

Next Study: Twinkies and French Fries make you fat!

Originally Posted By: Ursae_Majoris
Next Study: Twinkies and French Fries make you fat!
I won't believe it unless my government spends millions of our taxpayer dollars to prove it! At least we'd be feeding the hungry in the process... and then spending more taxpayer money trying to fix their health issues.
J

Quote:
The overall cost was $6 million to equip the trucks with video cameras and track them for three million miles as they hauled furniture, frozen foods and other goods across the country.
6 million for this?!?

So as long as I don't text while driving, this means I'm safe to eat a Checker's double decker burger with one hand and flip the bird to other drivers while driving with my knee right?
P

It's amazing what some folks call research these days. I wonder how many MS degrees and PhD's were awarded to graduate students based on this research study?!
Last edited: Jul 28, 2009

It's amazing to me that a driver with a camera in the cab would be seen texting in the first place...let alone be caught on camera texting their way to an accident.
P

If I was a truck driver, [censored] would freeze over before I let some "researchers" stick a camera in my truck! The way some of the big trucking companies treat fresh drivers though, it was likely a condition of employment.
D

I'd imagine a peer reviewed research study would conclude that the after affects of a truck stop burrito are far more detrimental to a truck drivers attention then texting.
C

I saw on the news the other day, cops are saying it's hard to bust people for texting on their phone while they drive. People are getting smart about it by keeping the phone at their side while they text or saying they were looking at their watch or some other excuse

I have very fat fingers and thumbs and have never taken to this "texting" stuff...always seemed just a small step above Morse code from the 1800's.

Originally Posted By: Papa Bear
I have very fat fingers and thumbs and have never taken to this "texting" stuff...always seemed just a small step above Morse code from the 1800's.

I don't have anything to say or anyone who would care. And I'm proud of that..
P

Originally Posted By: John_K
Quote:
The overall cost was $6 million to equip the trucks with video cameras and track them for three million miles as they hauled furniture, frozen foods and other goods across the country.
6 million for this?!?

John
The economy of research in university: 1) The university take a 65% cut on all research funding, to provide the infrastructure of everything including electricity, facility, admin staff, and the responsibilities to subsidize the education of the students. 2) Each graduate students performing the research part time will be provided with tuition and some salary (typically $15-20 per hour) for the time he spent. So you can say it is about $35k tuition and another $30k per year of salary. 3) All the computers they need when performing the researches (assuming $1000 per laptop) 4) Financial incentives to the truck drivers, lots of them, so that they will keep the camera up in the truck. 5) The cameras and installation of the camera, downloading the data on a regular basis. So the $6M becomes $2M after the cut by the university. Let's say 200 cameras and 100 hours of recording per camera, total 20000 hours of footage to be reviewed, by 20 hours a week, 40 weeks a year, per students at the cost of 70k per student per year. Things can add up quickly. Of course, I'm just pulling the number out of my behind (other than the 65% since that's what was gone when I was in the university research back in the days).
G

I don't have anything to say or anyone who would care. And I'm proud of that..
My cell phone is for the convenience of others more than it is for me. I don't have that much to say to anyone that can't wait for a land line. Some real research went into marketing of cell phones. There's not reason to be that "in touch" with so many so often.
G

Quote:
Your annoying so called friend with unlimited text would send people lots of text without knowing that it cost you 15-20c per text, and you have no way to decline the text without being charged.
I don't open it and delete it. I don't think I'm charged for this. Texting is absolutely the MOST foolish waste of money. There is no reason to pay another $5-$10 a month for a para-video game to take care of boredom. It's the greatest idiot booby trap marketing campaign I've ever seen. It's better than cable upgrades where you have to rent a box so that you can pay them even more fro another 100 channels that you won't watch either. Amazing. Are they offering courses in "how to make people waste more money and make it look and feel essential"?

Remember when they found it cost more to send and receive text messages than it cost NASA to send the same amount of data to the Hubble Telescope? Texting has its place, passengers in my rear seat can keep up with their people without irritating me or interrupting "Free Bird" on my radio. But I'm the driver, I own the car, and everyone else can suffer through my (brief) vocal phone converstation... which is now appearing safer by a margin.
G

Location
The Sandhills of NewYorkistan

Originally Posted By: pickled
It's amazing what some folks call research these days. I wonder how many MS degrees and PhD's were awarded to graduate students based on this research study?!
It's just a form of patronage and political payback.
G

Location
The Sandhills of NewYorkistan

Texting has become a pox on Western society.