Originally Posted by bsmithwins
These guys did a barrel cut down test and found a average loss of 23fps for each inch of barrel lost: http://bulletin.accurateshooter.com/2015/06/308-win-barrel-cut-down-test-velocity-vs-barrel-length/ BSW
No reference to you at all because you are not the author of this "study" (plus I have to refute it before so not the first time) and just posted the link- I'm discussing the article and its "conclusions" Although I support people conducting experiments (safely of course) and thinking, analyzing and all that as well as discussing conclusions- they have to be taken with a grain of salt and caution. Read this guys last part on sources of error- this entire design of experiment, analysis and conclusions are fatally flawed and not even close to the standards of testing under the auspices of the scientific method. At the 10,000 ft level with identical loads, a shorter barrel will have a direct bearing on velocity ( muzzle) different from a longer identical barrel just due to the reduction in friction alone. ( defined simply as one is physically longer than the other) At that level its true but unqualified in terms of "length to imparted friction" correlation and there are many techniques to manipulate those properties and close that gap drastically. That's why there is more than one barrel design ( a science unto itself) with different outcomes in terms of velocity, effective range, effective accuracy etc.
B

Barrel friction is important, but it's around 2% of the total energy involved, most of which is waste heat (as always with the waste heat, darn heat engines). These guys did a barrel to barrel comparison of conventional groove and land barrels vs a polygonal barrel from the same manufacturer: http://www.ballisticsbytheinch.com/rifling.html My take away from their results is that there isn't an appreciable difference between the two barrel rifling types for the pistols calibers they tested. BSW

Originally Posted by bsmithwins
Barrel friction is important, but it's around 2% of the total energy involved, most of which is waste heat (as always with the waste heat, darn heat engines). These guys did a barrel to barrel comparison of conventional groove and land barrels vs a polygonal barrel from the same manufacturer: http://www.ballisticsbytheinch.com/rifling.html My take away from their results is that there isn't an appreciable difference between the two barrel rifling types for the pistols calibers they tested. BSW
Let me qualify what I'm saying. I design barrels (for my own manufacturing when set up and my own personal IP when I go public as a manufacturer) as well have made them for rifles and done contract work for a few manufacturers. Also do the testing, thermal imagining, Finite element analysis and other testing. So I'm not speaking from internet articles and am in a position to review findings independently and directly critique. I can take them to any level on any part of the equation they wish to discuss and experiment on) At the highest level- "friction" is the one and only factor in determining both exit velocity and inertia that's solely owned by the barrel. That friction has 2 external contributors, the load and the bullet. Both have independent variables and create a third and all have to be carefully calculated and correlated. Then the barrel ( metallurgy, tempering, dimensions, length, surface asperity and plane down the run of the bore, even fit to bullet/bore and more)- each one of those contributes significantly to the overall coefficient of the shot in terms of bullet properties resulting from friction. To do this properly, each of those has to be measured in parallel and measured against the whole to make determinations as to what properties matter most (and least) and what manipulation strategy is required to get optimum results. So, measuring the bullet at exit is an aggregate number that is 'raw' until the contribution margins of all contributing factors are defined and measured in controlled testing. The articles are cute, very good reading, good to see from the perspective of generating interest in shooting and protecting the 2A and theres a lot to be learned and I fully endorse them but don't bet the farm on the completeness or accuracy of most of the conclusions is all I'm saying.
H

Originally Posted by ABN_CBT_ENGR
Originally Posted by hatt
The longer the bullet takes to get to the target the longer gravity has to work.
Not in this universe and relative to the physics and application aforementioned
If you change velocity why does trajectory change?

Originally Posted by hatt
If you change velocity why does trajectory change?
It doesn't always but that's a legitimate question so let me give a little more detailed answer. The detail is the equations often quoted are in a vacuum ( people often leave that all important thing out) Gravity is a universal constant and doesn't change but its strength (field strength) does change somewhat as it pulls from center mass (in this case the earth) so the higher up the pull changes but the velocity doesn't.( theres another layer of velocity coming from acceleration and eventual terminal speed but that's beyond the scope of this answer) So with gravity being a constant- all the other variables come into play ( air pressure, density, moisture, temperature, height above sea level, heat risors etc.) Then you have bullet geometry as it interacts with all the above and the infinite number of affects and outcomes Then you have the amount of energy imparted from the load/barrel friction ( stored kinetic energy like a flywheel) Then this is all assuming you are talking a "bore' straight line trajectory against a calculated datum line (not necessarily the lay of the land as the earth curves over distance)---- because if you are comparing a "line of sight" trajectory (sight alignment different than bore so bullet rises and hits the datum line at a given range) then that's a whole new set of calculations. so air friction, parachute effect and any of the above in any combination or amount can alter the actual and perceived trajectory of a bullet depending on where you are measuring from.
Last edited: May 2, 2020
H

Originally Posted by hatt
I think I'll just continue to trust experience and ballistic calculators.
Many do, I use them myself in the field. just curious, what do you think those calculators are calculating? This isn't magic, its a long list of calculations and the more inputs in the greater the accuracy coming out.
B

Originally Posted by hatt
If you change velocity why does trajectory change?
The simple way to think about it (ignoring all the factors mentioned above) is everything falls at the same speed of 32 feet per second. For a trajectory what we care about if where the falling thing hits the target. If I drop a bullet (horizontally velocity is zero) it hits the ground at my feet. If I fire a gun at the exact same time (a perfectly level gun, at the same height, and ignoring the earth is round) the bullet (horizontal velocity more than zero) will hit the ground at the same time the dropped bullet does. How fast the bullet is going determines how far away it is from the gun when it hits. That curve that describes the distance over time is described by the trajectory. BSW
Last edited: May 2, 2020
S

Georgia Precision makes a really nice 18" barreled tack driver called the Gladius. If you have a tight budget, though, look elsewhere.
T

Hi I am not aware of a factory option in a bolt gun with a 16" barrel but a good place to start imo would be a Tikka T3X compact tactical rifle. It has a 20" barrel but any decent smith could chop it back to 16" for little money. It will also be very accurate. I would use a Hornady 168 A-Max with Varget. If you do not reload, the Hornady TAP Ammo is excellent.
Last edited: May 4, 2020
H

https://www.atlanticfirearms.com/products/vepr-308-rifle-16-barrel I would be inclined to get a gas 308 in 16 inch, but that is just me, I have a few of these, fun to shoot and recoils like a 22 LR on steroids.

The one I was specifically interested in was a 783 HBT with a decent 3-9 scope for 400 Canadian dollars. Not a bad deal for up here. 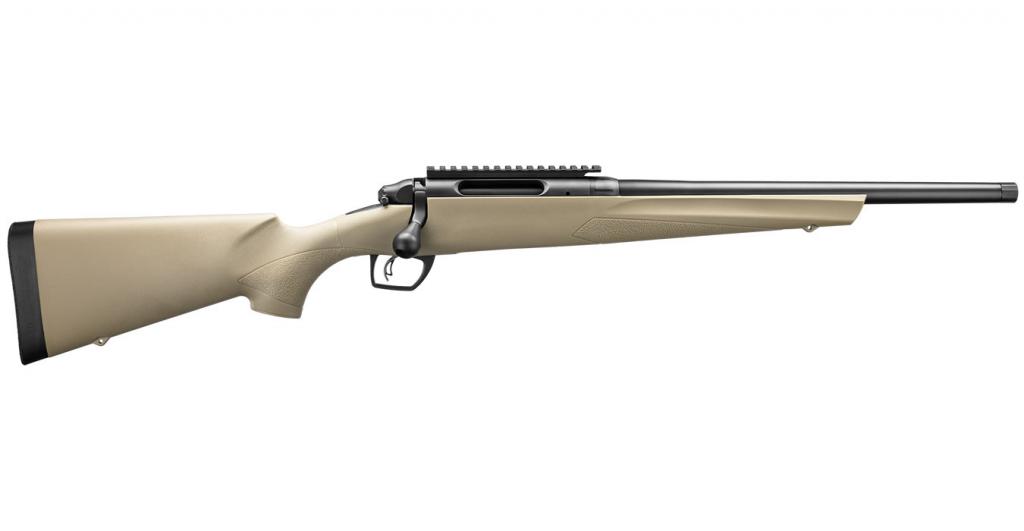 Originally Posted by Warlord
The one I was specifically interested in was a 783 HBT with a decent 3-9 scope for 400 Canadian dollars. Not a bad deal for up here.

Not familiar with that model is that one of the Remington with the press fit barrel that is a throw away?
W

Not familiar with that model is that one of the Remington with the press fit barrel that is a throw away?
It uses a barrel nut similar to savage. As for throw away I don't know. I don't consider any rifle throwaway.
H

I have a Mossberg Patrol, you can use either M1A and AR10 style magazines It's a great shooting rifle. And not a lot of money. https://www.mossberg.com/product/mvp-patrol-rifle-27738/

Update. I ended up passing on the stubby 783. At my new range we shoot out of ports cut into an old semi trailer and the way the benches are set up I doubt I could even get the short barrel outside the trailer. Probably not very comfortable for anyone else who might be in the trailer. BOOM!

That is really cool. The Capone and Purple gang from our Detroit area, would have loved having those under their long coats.
You must log in or register to reply here.