Earlier this month I took a road trip with some friends and some friends to be. We started off in 5 Corvettes from near where I live. We drove 800 miles in 2 days to Flagstaff Arizona where the National Park Tour started. The tour is put on by Dwayne and Cindy Bublitz who run Bloomington Gold Tours in Flagstaff. They do a 1st class job, all lodging (nice places too) and 3/4 of the meals for the 4 day event were taken care of as part of the package. Their tour book and other information was very well done. There were 24 Corvettes on the tour, including 3 belonging to the 6 Bublitz family members helping run the tour. If you are interested, Google Bloomington Gold Flagstaff.

The 5 cars from near where I live in Northern California. In all we traveled 2100 miles together and still got along at the end of the trip.

We started on Route 66 a few miles into Arizona. Oatman is on the old-old part of Route 66. It was bypassed in 1951, well before the Interstates.

We stayed just over the border in Needless California (114F that evening) the night before so arrived in Oatman before the other tourists. Oatman used to be a mining town, but now it's primary industry is souvenir and T-shirt shops. Normally there are wild donkeys roaming the main street looking for handouts but they weren't up yet. Prolly union donkeys. 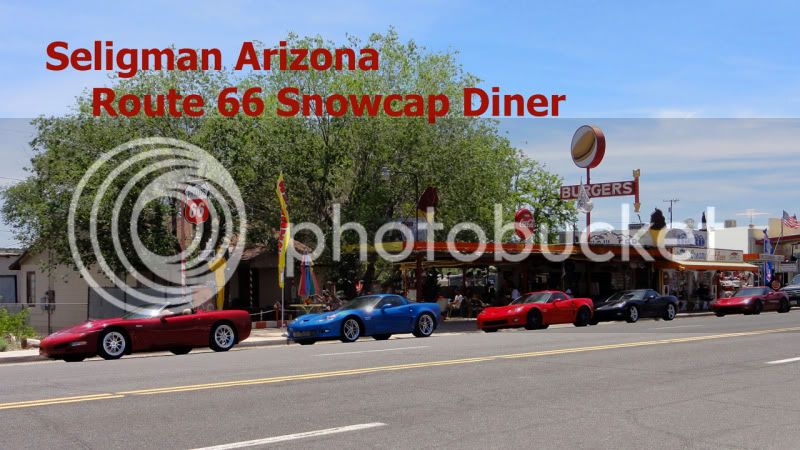 Old-old Route 66 through Oatman loops north of I-40, coming back under I-40 a few miles from Kingman. Then it follows the main street through Kingman then Route 66 loops north of I-40 until Seligman. The Snowcap Diner in Seligman is one of the original Route 40 diners. It is run by the son of the man that started it in the early 1950s. 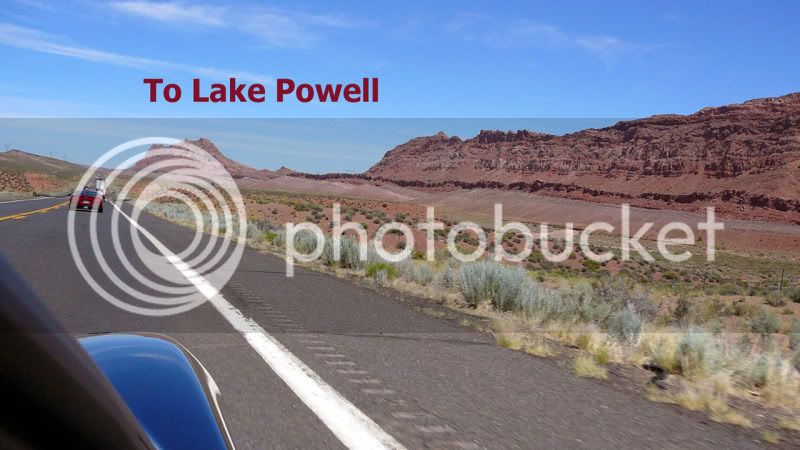 The first official day of the tour, 24 Corvettes headed north out of Flagstaff on US-89 towards Lake Powell, expecting Wile E. Coyote to run across the road chasing the Road Runner at any minute.

IIRC, Lake powell is the 2nd largest man made lake in the US and has over 1900 miles of shoreline. It filled many canyons, hence the long shoreline.

There is lots of recreational boating of all types on the lake, but it's so big that once you get a few miles away from a marina, it's not crowded.

Our Lake Powell tour was on a 90 foot boat that the skipper put up narrow canyons that were unbelievable. At times he was withing 3 feet of the canyon walls, occasionally 3 feet on both sides. AFAIK, he didn't touch the canyon walls once.

There isn't as much to see at the North Rim of the Grand Canyon as at the South Rim, but IMNSHO, what is there is more scenic.

The road North from the North Rim 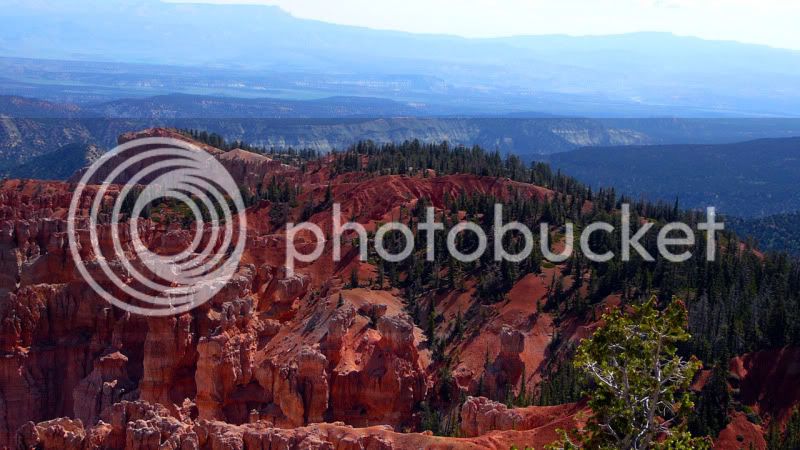 Nice pictures. 114F in the evening at Needless California, then it could be above 120F at Death Valley.
B

Fantastic pictures! Thanks for sharing them with us. I'd love to take the GXP on a trip like that.
X

Originally Posted By: HTSS_TR
Nice pictures. 114F in the evening at Needless California, then it could be above 120F at Death Valley.
We really lucked out, the long term forecast for Death Valley had been 117F a week before we got there. Some overcast had drifted in the day we went through and Death Valley was only 99F when we went through. That is unsual for June

Man, that some nice photos bro !

Nice. Better not show the Missus, she's got the house full of travel brochures already.
C

beautiful country, what oil did you use?

Made that trip in 1968 in a VW Bus, no A/C. Hot does not do it justice. I would love to make that trip again, but with 24 Corvettes would just be icing on the cake. Thanks for sharing.
X

Originally Posted By: crinkles
beautiful country, what oil did you use?
M1 5w-30 to GM4718M spec, naturally.

Max oil temperature of 244F was at Towne Pass leaving Death Valley. From Stovepipe Wells at 0 feet elevation to Towne Pass at 5,000 feet. It's nearly straight for 16 miles. A few corners but for the most part, no reason to slow down. Makes me wonder what oil temps loaded SUVs etc see on that grade on a really hot day. The car could use an oil cooler but it isn't bad enough for me to bother installing one. My friend in his nearly new Z06 ran about 200F there. The Z06 has a good oil cooling system.
Last edited: Jun 24, 2010
K

Very nice. That would have been a blast. I've been to Bryce when I was a youth. I love "J/A Junction".
M

Amazing beauty of your trip/photos. Thats one thing I hate about FL is that its flat like a pancake with really no elevation change or mountains. Where is the picture of XS650 ?
A

Originally Posted By: addyguy
Which 'Vette is yours? I can't tell if it's a blue one or black....
Top picture, the Black C6 is mine next is a blue Z06 a red C6 a red Z06 a red C5. The C5 dynos about 50 hp more than a new Z06. It has a roots blower, performance heads and a bit of a cam as well as lots of tuning. He also beat all of us on gas mileage. It's really well done car. the only hint that it isn't stock is the tasteful hump in the hood.
A

I thank God I live in the USA... so beautiful. I want to do this kind of drive before I die.
G

Originally Posted By: Shannow
Nice. Better not show the Missus, she's got the house full of travel brochures already.
I'm envious. Joyce has been to most of those places on work trips. She's a lousy photo journalist (her image of the sphinx was from about 200 yards and dwarfed by the tourist shops on her Mediterranean tour). I get the cheaper t-shirts and a cartouche key chain (surely made in China).

Originally Posted By: Popinski
I thank God I live in the USA... so beautiful. I want to do this kind of drive before I die.
Of the 24 cars on the trip, at least 4 were from Ohio, One of the women even handed out Buckeyes at dinner one night

Was just in Vegas / Grand Canyon. Got rained on during the trip to the South rim , got sleeted on when I got there!