Please help me with the selection of an "MTF"

I apologize in advance re the length of this post re manual transaxle fluids. I would like to get some discussion going to help me with the selection of a manual transmission fluid for my 3rd generation Mazda6 which has a 6 speed transaxle and has all of 1,200 miles on it. Not yet broken in, I know. The transaxle exhibits less than butter-smooth first and second gear synchro action. I note that this “Skyactiv” transmission has triple-cone synchro’s on 1st and 2nd and then single-cone synchro’s on the balance of the gears. Third through sixth gear synchro’s are totally smooth; 1st and 2nd are not perfect… exhibiting “double-bump” and some “notchiness”. In my view – seeing how often this comes up within the Mazda3, Mazda6, and CX3 communities – I would say that the transaxle design is “weak”. I can get totally smooth 1st to 2nd shifts by: i) double-clutching; or ii) by being really careful with the non-double-clutched shifts… shifts made only at pretty moderate road-speed-in gear speeds, by delaying the shift ever so slightly. The transaxle’s operation is a bit worse with cold MTF versus when at full operating temp. My goal is to smoothen-up first to second to the full extent that I can within the design limitations that (possibly) exist with the C66M-R transaxle. I have been the only person to have ever test-driven this car. I can, on an unqualified basis, say that the 1st and 2nd gear synchro’s have NOT been “knackered” as almost all of my down- as well as up-shifts have been double-clutched accurately. ‘Been at this for 42 years with no worn synchro’s. I want to try to use the best MTF I can, properly making the choice between shift-smoothness and gear- and bearing longevity. The mfr calls for GL-4 75W-80 fluid. Following, is a 40 or so year old statement by VW re competing considerations re the choice of lubricant. I believe that this may only in part be accurate in today’s world… in that specific synchromesh friction modifying additives have been added to varying degrees for some of today’s MTF’s – additives that don’t trade-away bearing and gear anti-wear properties in favor of better shift action. This is combined with lower viscosities at 100C, for both again-improved shiftability, and to enhance fuel efficiency. Still, I believe, feature-for-feature being equal, slightly higher viscosities will improve gear face and bearing life expectancies. Here's VW's statement:

I am considering BG Synchroshift II and also am considering Redline MTF – both being GL-4 75W-80 fluids. For the best life expectancy I would in-a-flash choose Shell S6 GXME fluid, about 9.55 cS at 100C, as Shell lubricants are generally excellent, but I doubt that this Shell lubricant has many additives to enhance shiftability. They target heavy truck transportation and super-long OCI’s. I have not heard many disparaging comments re the Synchroshift II – but I note that its 100C viscosity is about 7.1 – really quite low. That gives me pause, at least a bit. The Redline MTF has a 100C viscosity of 10.4 – better – and apparently has a very good rep. re shiftability. It would seem to be a good choice, but I have found some rather disparaging comments about it. I provide these as images. I do not want to incite a highly negative reaction to these, but there does happen to be some negative info out there. These comments date from 2006 through to 2016: 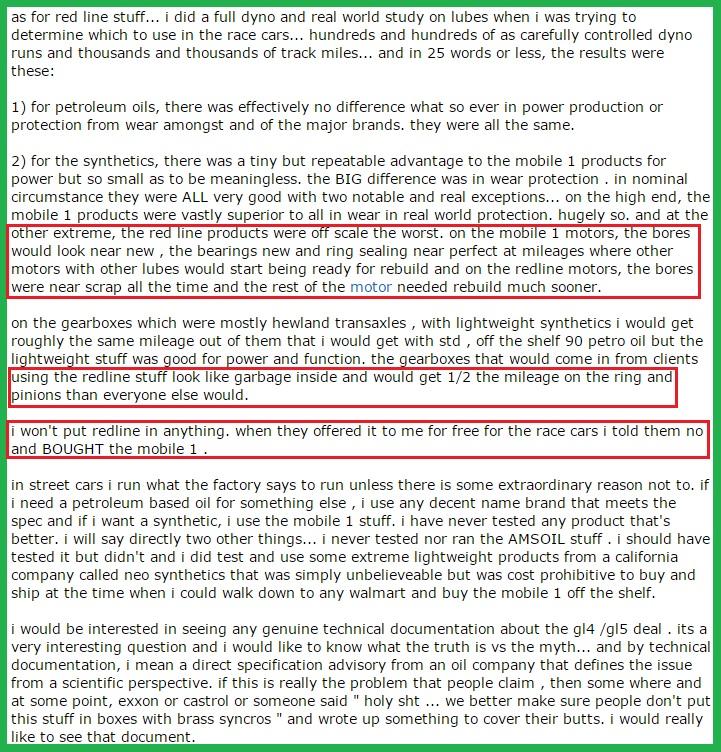 I would also consider other fluids…. combining wear-resistance and excellent shifting performance. Ideas? My questions include: -Can I feel confident that the Synchroshift II will give me fairly good antiwear properties, what with its so-low 100C viscosity; -How do folks answer the comment made that the Redline product is so full of additives, that it centrifuges out many of the additives, and leaves low viscosity depleted-additive oil to poorly protect gear-faces and bearings?; and - Should I NOT put rare-earth magnets, incorporated into both fill- and drain plugs, when I am planning to do a series of UOA’s? It seems the magnets would be best for after the initial UOA work. Thank you folks, in advance, for taking the time to comment.
Last edited: Oct 7, 2017
M

This sounds completely misplaced and baseless.
Quote:
-How do folks answer the comment made that the Redline product is so full of additives, that it centrifuges out many of the additives, and leaves low viscosity depleted-additive oil to poorly protect gear-faces and bearings?; and
It simply means the 'concentration' of said additives is high enough to the extent of approaching additive 'saturation' point in the fluid medium. Is it bad ? Not necessary. Is it good? Probably.
Last edited: Oct 7, 2017
G

I have only had honda, nissan and toyota vehicles with manual tranmissions. My cars never shifted good with the OEM. I always used either Amsoil or Redline. I tried them both in each car and one was always better overall. One would just shift and feel better. But for the most part, I would end up with Redline. It would last the longest before my shifting got notchy. I don't care what the forums say. Redline and Amsoil are top quality lubricants and you won't go wrong with either. In my experience, a thinner oil will not feel as good when shifting. I want it to shift like butter.

Never seen Redline MTL bashed like that ... have it in my transfer case now in a GM synchromesh application... What was the bore wear comparison between RL and M1 related to?

I recently used Royal Purple Syncromax in my Turbocharged S2000. If you did not know, the S2000 transmission has some very specific requirements from Honda. And the Honda MTF is a unique product. No matter, the Syncromax works far better than the OEM required MTF in the S2000, with far better shifting. I also changed the MTF in my Jaguar X-Type. I used Mobil 1 ATF. Amazing improvement over the Redline MTF I had recently used. The Redline MTF resulted in very notchy shifting right away. Hence the need to try something else. I will try Mobil 1 ATF in my Honda next time! With regard to transmission lifespan, I've been driving manual transmissions from the very start. I've broken more than a few of them with excessive HP. The only ones that experienced bearing/wear failures were ones where the previous owners failed to change the OEM fluid, or had known lubrication issues, such as the Honda S2000 input shaft bearing lack of lubrication. Matters not what fluid you use, if the bearing gets insufficient oil!
K

I think in your application, Redline MTL is a good choice. The bashing comment you heard I think is caused by confusion of the Redline product application, and they might use wrong product for the requirement. In the past, a lot of lightweight application is suggested using ATF rather than proper manual gear fluid. This may cause a disaster on demanding application, even though the shifting feel may seems ok at the beginning. So far I have used MT-90 for my Toyota for almost 250K and the gearbox still shifts very nice without excessive clearance that happened to other same model cars at the same age. Just note that typical manual gear oil is not GL-5 where in certain application is required due to hypoid gear requirement. So as long as the application is correct, I do not have doubt on Redline. NB:I think for Focus that recommend thick oil, replacing with MTL is a problem, since the spec require thicker oil like MT90 One of my advice on Redline on gearbox is monitor shift quality especially after long high-speed running, when it changes significantly just change the oil. I find gearbox oil is not lasting like differential oil, which in case of M1, you can be safe to run 200k miles on diff without any change.
T

The easy answer is Redline MT90 for an LSD trans and MTL for a non-LSD trans when speaking of fwd vehicles. I use MTL in my sw20 which is technically a fwd setup just in the back of thr car.

Many thx to all who hav responded. VG and helpful responses. To summarize: try several and stay near or at mfr-rec'd spec. Use UOA and pay attention to shift feel changes, both cold and hot,also,to decide on OCI. Sage advice. This a GREAT forum!

Motorcraft XT-M5-QS. Transformed the shifts in both my Mazdaspeed 3s.
C

I know that Ford "Honey" is good stuff but i think it is too high a viscosity for my C66M-R transaxle. Mazda cheaps-out and does not run the speed gears on needle bearings but on splined journals + uses shaft oil funneling... so i want to ensure that speed gear lube remains optimal...
Last edited: Oct 7, 2017

Originally Posted By: Cdn17Sport6MT
Many thx to all who hav responded. VG and helpful responses. To summarize: try several and stay near or at mfr-rec'd spec. Use UOA and pay attention to shift feel changes, both cold and hot,also,to decide on OCI. Sage advice. This a GREAT forum!
So what is the factory recommended fluid type for the transmission (Gl-4 or 5, and what weight)? I could not find information on that transmission and year from a casual google search. I have to say what FowVay said is spot on. Based on the comments you posted, I see various fluids going in W/ORT the spec'd fluid - just on "hey, I heard this rocked."

It the transmission does spec a GL-4 75W80, then a 10 [email protected] fluid is most likely the proper viscosity so the Redline https://www.redlineoil.com/product.aspx?pid=45&pcid=7 or the Amsoil https://www.amsoil.com/lit/databulletins/g2080.pdf or the GM synchromesh friction modified fluids would be the correct fluids.
Last edited: Oct 7, 2017
T

I used Redline MT90 in my last truck's manual trans (see sig). It had a general complaint of not shifting well 1->2 and into 1 when coming to a stop. After Redline, no problem...smoothed all gear up, too. Used it for ten years and no issues.
A

I have experience with the following GL-4 gear fluids: Pennzoil Platinum (For a 2012 Suzuki SX4 CO): Pennzoil GL-4 Pentosin MTF2 (For 5 speed BMW's): Pentosin MTF2 AMZN shows these as unavailable. The Pentosin can be sourced through O'Reilly's and try Pep Boys for the Pennzoil....
R

Your concerns relate to your 2017 Maxda 6 correct? Are you going to endanger your vehicle warranty with aftermarket fluids? Your tranaxle is still breaking in. IF you feel compelled to do something, then use the OE fluid.
You must log in or register to reply here.

Help me determine if my CVT fluid has been changed