I've been trying to grab a factory stock Beretta Model 92 Brigadier for a while now. The problem is they are never in stock.... Anywhere. Either in the Bruniton or Inox finish. This Wilson Combat 92-G is the cream of the crop, albeit pricey. Davidson's got 5 of them in on Christmas Eve, so I immediately ordered one. I just got shipping confirmation this morning, (it's coming from Davidson's in Prescott), and I'll be picking it up from my FFL tomorrow. Beretta / Wilson does a nice job on these pistols, with the slide fitting, trigger, sights, hammer, frame checkering, springs, extended steel magazine release, and pretty much everything else. Like all Brigadier's it has the much thicker slide. When you break it down, the price isn't too bad if you add up the cost of all the custom Wilson Combat parts they put in it. There was a guy on You Tube who sent his stock Beretta 92 in, to have all the upgrades and action tune done. He said it ran him around $750.00. Throw in the cost of the gun on top of that, and it's right around what I paid for the whole gun new in the box. Plus the gun ships with 3, 15 round magazines, that are supposed to be "sand resistant". I have no idea how a magazine can, "resist sand". Most likely sales hype. I've got several 17 and 20 round Mec-Gars on hand for my other Beretta 92, so I'm good in the magazine dept. I'll most likely wait until after the 1st to get to the range and crank it up. That way everyone will be back to work, and the range won't be so crowded. I've read nothing but good reviews on this pistol. And I'm feeling pretty safe and confident buying any gun with the Wilson Combat name on it. They don't make junk. My gun is identical to the one in this video, except it has the cherry wood grips instead of the olive colored G10's. I'll try to get some pics up when I get it. Anyway, at my age I'm finding the best Christmas presents are the one's you buy for yourself.
G

Nice, I like the black and green on the one posted. I have a 96FS Inox that I bought new about 9 years ago. I have always liked it but never loved it.
B

Nice pistol. You will have to let us know how it shoots.

Very nice gun! I too like the green grips on the one in the video. Looks like a good shooter.
B

"Sand resistant' magazines is a reference to the military magazines that had feeding problems in the sand box. You see, to save $$, the military spec'd their M9 mags to be parkerized, which is a matte, rough finish vs the smooth blued or anti-friction coating most mags have.
G

Nice Bill! My bone stock 92fs is a tack driver. The WC 92-G looks scary smooth and accurate. I wish I had your toy budget!

Awesome! Look forward to your range report and accuracy testing.
B

Just to be more accurate, Wilson sends the parts to Beretta, and Beretta completely assembles them with Beretta/Wilson parts. Wilson doesn't even tough the pistols, other then log them in, and then log them out, when they get shipped to the distributor/buyer. If you order an action tune while its in Wilson's hands, they will tune the gun up. Otherwise, its made/assembled by Beretta and never touched by Wilson. Sand resistant means that the magazine has a very slick PVD coating. Much slicker and more better than parkerized or blued magazines. Here is mine. A fine gun indeed. It was my night stand gun until the Glock 19X was released. 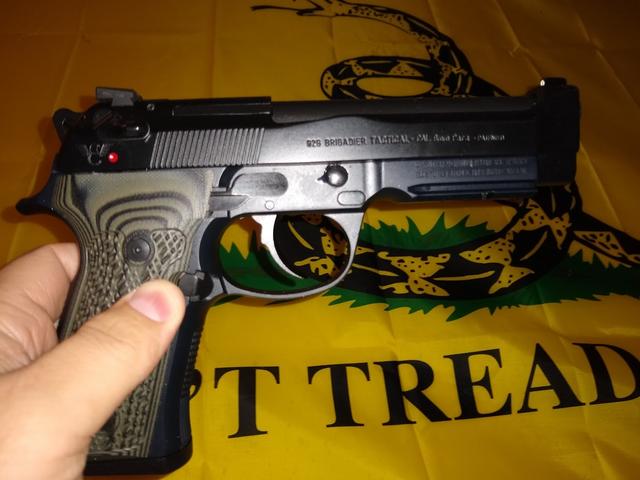 Thanks Bubba. My gun comes with the "Action Tune" as standard. This is the exact gun. Just curious, did yours come with the carrying case and bottle of, "Wilson Lube"? I should be picking it up today. https://www.galleryofguns.com/genie/default.aspx?item=BER-92BRIG-9D&zipcode=85307

I picked it up yesterday. It's a beautiful gun. The slide to frame fit is the best I've ever encountered on an auto pistol. Beautifully smooth with zero play. 3 Magazines are included, with a nice embossed Wilson Combat Carrying Case, and a bottle of "Wilson Lube". (Thin as water, and looks like ATF cut with Kerosene). After New Years I'll head to the range and light it up. The sights on this thing are beautiful. A nice Trijicon front blade that is very bright. (At least in my pitch black closet). I must say the coating on the magazines is slicker than snot. Much slicker than the bright polished blue on the Mec-Gar's. I'll dig up some 20 rounder's I've got to bring to the range. Wilson / Beretta really did a nice job on this gun. I can't find a single thing on this pistol I don't like. It feels and points, and is every bit as ergonomically comfortable as any of my CZ's. And the weight is perfect with the slightly heavier Brigadier slide. The checkering on both the front and rear strap is aggressive, but doesn't come off looking or feeling like a potato grater. All the controls operate effortlessly, and none are tight. And the grips look and feel good. No sharp edges exist anywhere on the gun, or any of the controls. They did a nice job dehorning it without going crazy. Like they do with so many of the "meltdown" models. Overall thus far I'm impressed. If this thing runs as good as it feels and looks, I'll be a happy camper. Originally Posted by Gasbuggy
Nice, I like the black and green on the one posted.
To be honest, when you consider the cost of the gun, I would have preferred some type of nicely finished exotic hardwood. But this is a combat / service pistol, so I can understand why they went with G-10 grips. They're all the rage now anyway. And people have to have the, "flavor of the month". And they're starting to grow on me the more I eyeball them.
J

You don't have a target to show us yet?

I'll get to the range after New Years. Too crowded now, everyone's off.
I

I've had one for a couple years and love it. They must have sweetened the deal with the case and lube. When I purchased mine, it was directly from Wilson Combat. Mine had the action tune and included a little note signed by the guy who did the tune. I get almost as much joy just looking at and handling this gun as I do shooting any other. Congratulations on your purchase! Love the black cherry colored grips!
Last edited: Dec 31, 2018

Originally Posted by IndyFan
...... Mine had the action tune and included a little note signed by the guy who did the tune.....
Mine has a sticker on the Beretta box that say's, "Action Tune Performed". Along with the guy's initials who did it.

I got the Wilson Combat / Beretta out to the range early this morning. I brought 350 rounds but only fired 250. It was really cold and damp out, and my fingers were freezing from loading the 3 magazines I brought with me. The gun shot beautifully. Not a single malfunction. The trigger is nice, but typical Beretta with a lot of take up in single action. But it broke nice and crisp, at what I would guess to be right around 5 pounds or so. The sights are crystal clear, and print at point of hold. All my shooting was from 50 feet. Normally I like shooting from 25 yards. But we got a lot of rain the other day, and the range was really muddy beyond the 50 foot target stands, so that is where I shot from. . All 3 of the Beretta supplied magazines loaded and fed flawlessly. My ammo was all Remington 115 Gr. FMJ Law Enforcement Training Ammo. I started shooting as soon as it was light enough to see the target. And this ammo provided quite a bit of muzzle flash. The cases all piled up in a neat 3 foot circle just a few feet to the right, and back about the same amount. The gun shoots well, and is very accurate. Even with cheap ammo. Overall I'm very pleased with it's performance. One would expect as much from a $1,300.00 pistol. But these days you never know until you shoot it. This thing will get shot a lot. Between the excellent sights, good trigger and ergonomics, and butter smooth slide and action, it's pretty hard to put it down.