Hi Guys, I was interesting about the usefulness of Mann filter, so I opened it. Any comment is much appreciated!

4. External side: contaminated oil flow in.

5. Inner side: filtered oil out.
S

looks like it was run in a diesel
Z

Yes, it was also my thought due to the dark color. This is a 4 cyl gasoline engine after a cleaning cycle: the oil rings were sticked to the piston by burnt oil / carbon deposits. That's why the short OCI. Now the oil burning is reduced significantly. My worries about the small metal particles on the filter: is it a sign of normal engine wear or excess? BTW: the filter works perfectly; no any solid particle in the oil and the blot test gave dark brown color - not black.
Z

Avter 2 years I opened a filter again: found less contamination, buf these shiny tiny metal particles make worry me: brass from the shaft bearing? Is it normal or excess? 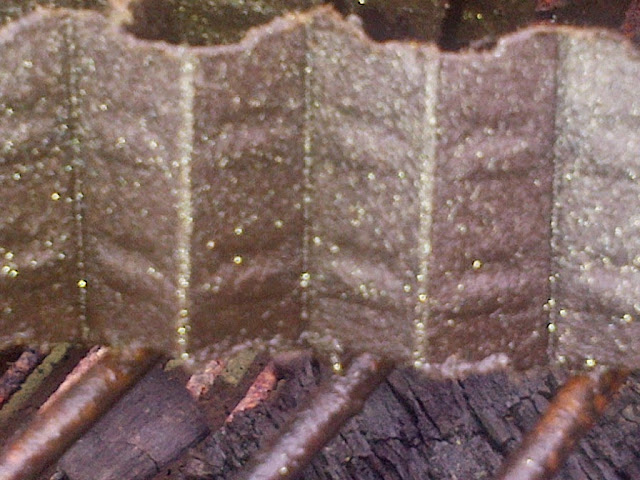 Certainly looks like a lot of metal particulate contamination. If this is a 16 year old vehicle with a history of carbonized rings and 250k miles (not km, correct?) then almost anything could be happening independent of the cleaning and oil change. Is this the first oil & filter change since you ran the "cleaning cycle" in 1012? What did you do to clean the engine at that time? You said this filter was in service for 2 years. How many kilometers/miles in that period, the 6k you mention in your signature?
Z

Hi R80RS, Thx a lot for the comment! Yes, it has 256K miles (410K km) with a long and successfull cleaning between 2010 and 2012. The previous owners never dropped the sump, the oil pickup screen was almost fully clogged. Burnt oil residues were under the valve cover as well. Some engine flushing, frequent synthetic oil and MANN oilfilter change (both 3000-6000 miles) did the job. This is the 2nd oil filter was opened (several oil filter changed, but not opened since 2012). The engine runs very smoothly (like a dream), no smoke behind me, acceptable cooling loss (half a qurt per 3000 miles). Only issue: oil burning (1 quart per 1000 miles). Economic point of view: I will pull out the engine for full renovation earliest after 300K mile - if the chassis won't be rusty.
Last edited: Aug 25, 2014

Jul 4, 2020
Triple_Se7en
D
Which filter for next change: Purflux chevron vs MANN vs Manufacturer filter
2