Originally Posted by Cujet
Just an FYI, modest damage to the piston crown surface and cylinder head surface will not affect the engine one bit. The problem comes in when piston damage is severe enough to crack or distort the piston then stick a ring or cause aluminum chunks to break off. We've had high HP race engines ingest all sorts of track debris and cause all manner of surface distortions, without any affect on HP or reliability. Entire seasons were raced with some pretty rough looking components. HOWEVER the screw, if steel, is probably stuck on the catalytic converter and there may be some possibility of it finding it's way back into the engine.
Yeah, me too. These pics show the damage to the piston, I can't see the bottom of the head and I can't see if the top ring land is crushed. To pull the head means removing every accessory on the engine, as they are all mounted to, or through the timing cover. The big mountain range is the exhaust side, the smaller range is the intake side. My biggest concern, aside from the obvious damage (with matching damage on the head I'm sure), is that it is so peaky. 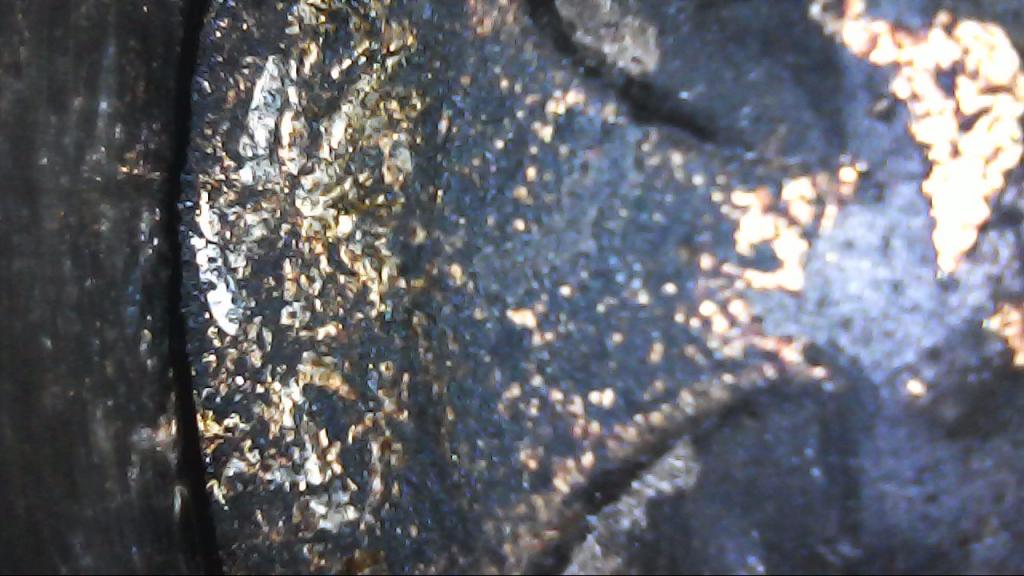 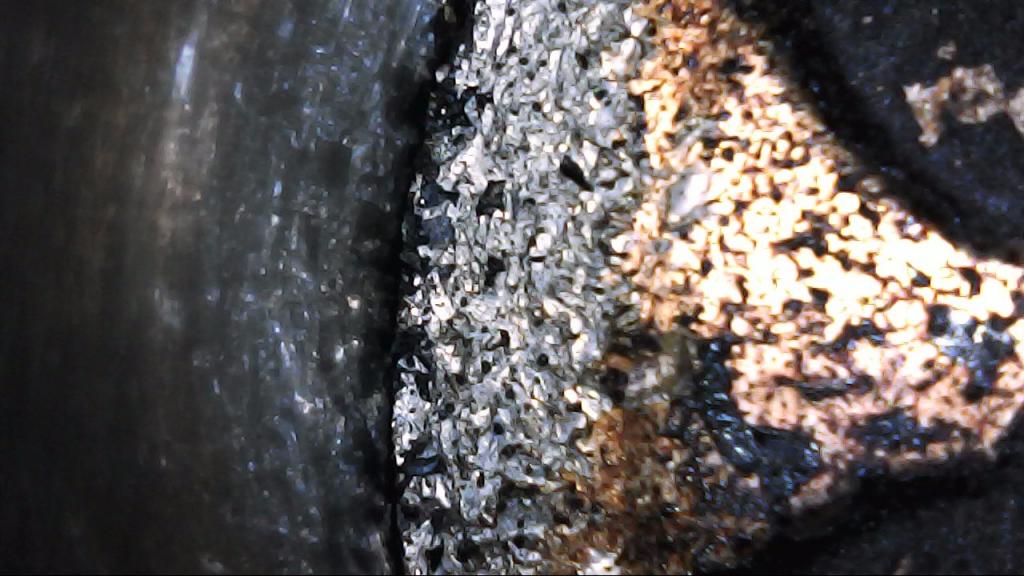 Keep driving it till it actually dies and assess.
S

Can you tell if it is pulling timing or not? I'd think hot spots and preignition, but either it's doing it already or it's not going to. I'd be curious if the cylinder walls took any damage. Cool borescope pics, that reminds me that I need to order one...
G

I would pull the manifold and get the screws out of the cat.
M

^^^ I'll second supton here.^^^ "Can you tell if it is pulling timing or not? I'd think hot spots and preignition, but either it's doing it already or it's not going to." I lived with hotspots and preignition in a chevy 283. Learned that on 93 octane in was fine, whereas on 89 it would stop moving forward on level ground until it cooled down.
W

Originally Posted by Gasbuggy
I would pull the manifold and get the screws out of the cat.
Not necessary. If the remnants of those screws are caught in the cat, they aren't going anywhere (unless you turn the vehicle upside down).

Originally Posted by wag123
Not necessary. If the remnants of those screws are caught in the cat, they aren't going anywhere (unless you turn the vehicle upside down).
It's a remote possibility and if the pieces are small enough it's a definite possibility. Caused by exhaust back pressure, same concept as the Nissan engines that would get trashed from ingesting bits of pre-cat.
G

Originally Posted by wag123
Originally Posted by Gasbuggy
I would pull the manifold and get the screws out of the cat.
Not necessary. If the remnants of those screws are caught in the cat, they aren't going anywhere (unless you turn the vehicle upside down).
On most cars, I agree. Nissan puts their cats right on the engine almost. They spent millions of dollars replacing 3.5 and 2.5L because particles were getting sucked back in from the cat, scavenging effect.
C

Yeah, this is one of the motors that if the cats fail, it can get back into the engine. It doesn't happen often, but I could see it happening in this case. I haven't looked yet (I haven't run it again) but I can monitor the knock sensor and ignition timing real-time. This car requires premium when everything is good, now it will probably require race gas. But I can adjust base timing slightly, so I can retard it a few degrees. I probably will just start with seeing if I can drive down the road and back without a valve head falling off before I go too much further. For all I know, I could have one screw sitting on top of each cat.
G

For $115 a AAA premier card should make driving almost worry free for you. I seriously doubt this car is tuned to the edge from the factory, should be plenty of variance in timing for it to carry on. Especially if you're able to run 93 instead of 91.
C

AAA is a good idea. I should check the details of my roadside assist/towing coverage through USAA.

Originally Posted by mattd
Compression test and leakdown test (leakdown if necessary) the affected cylinder(s) and if they are spec run it IMO
+1. This is the lowest cost step to help end speculation. Maybe I've missed something here but so far this is all speculation - if the engine will run right, if it will consume, etc. Figure compression. If ok, figure out how to unbolt the converter and look for screw. If no screws there, be more concerned. I couldn't in good conscience dump this car on someone without disclosure. It seems TBD if that's necessary yet.

If you are mechanically comfortable to rebuild an engine I would get a junk yard engine since you like vehicle and go through it. Check all tolerances and reseal engine while you drive yours. When engine fails you have a great engine to install that you should get another 200k out of. You could even replace cats if you suspect screws in them. This is based on you liking vehicle and your knowledge. Will you ever see your money out of it no but will you enjoy the vehicle yes.
C

I did the compression test. After sitting for a couple of days, the lowest compression was 215 psi, the highest was 225, so not much variance. It was, surprisingly, higher than my G35 which tested at ~190 for all with the same gauge. I sent a sample of the oil to blackstone (and changed it), I replaced (and red loctited all) the power valve screws. I retarded the ignition timing a degree - not that it would make much difference. I've put a couple hundred miles on it so far, it feels fine - no odd noises. The cold piston slap might be louder, or maybe not. It's silent once it warms up. I think I will drive it as it is. Maybe I will spend less time near the redline now. I had seriously considered getting and/or building an engine for it, my main concern is that up to this point I have had to put a minimal amount of money into the car. How much longer can it go before the A/C quits or the transmission or the transfer case. Even the CV joints/drive shafts are original. I think about all the parts that have not failed and how little life they probably have left. None of the parts for this car are easily available or cheap. It shares almost nothing with any other Nissan/Infiniti. If I expect two more years out of it, that means the majority of the parts need to last to 220K+ What concerns me is when I see 20 year old Sables being rebuilt, it makes me wonder if I am buying too much into the disposable mindset. I was thinking of pulling the exhaust manifolds off and maybe moving some new cats a little farther away (like under the car) so I wouldn't have to worry about the engine re-eating the screws or cat material, but to get the combined cat/exhaust manifolds off, I (according to the FSM) have to remove the radiator, ATF cooling lines, the lower suspension crossbar, the A/C compressor, alternator, power steering pump, power steering gear, as well as a bunch related parts. At that point, it's not much more work to pull the engine, so I think I'll see what blackstone says and continue to drive it while I look for a lower mileage QX70 V8 or 2012+ FX50s. As long as I don't have to give up my adaptive cruise control, I'm (slightly) flexible on colors and options. Maybe I will see a killer deal on a low mile engine for this one and grab it. Who knows.
F

Any update on your screw eating engine?

Originally Posted by wag123
Originally Posted by rooflessVW
New screws with loctite (high temp) and drive on. Deal with a dead engine when you have a dead engine. Yours just got a little hungry, and seems satisfied for now.
+7 Run'er until she blows. You have nothing to lose. While you have it apart, loctite ALL of the screws.
Worse come to worse, you can tell everyone you know that your engine essentially cannibalized itself and still ran and that is just awesome.

If you can do the work yourself then a junkyard engine may make sense. If you have to pay for labor then a reman is what I would do. But the car would need to be perfect in every way (except the engine) before I would spend a lot on a 14 yr old car.

Since you stated that these engines already have two potentially fatal flaws (injesting cats and throwing rods) I would not chance a used engine, no way. All that work to potentially put yourself in the same or worse situation.

Selling it won't get much if you disclose what happened. Like others have stated, I would run it until it blows, which could be a long time or never given what you have listed above. It's hard to tell from the pictures what is damage and what is carbon. I'd buy a AAA premium membership and drive it, you might never have an issue.

I repair small engines on the side, and someone brought a 15hp Kohler Command lawn tractor engine to me that had done something similar, it ingested a butterfly screw from the carburetor. That engine seemed to have more damage to the piston, but the customer was low on funds. I loctite'd a new screw onto the carburetor, put some thicker 20w50 oil in it, and sent them on their way. That was 3 years ago, and it's still running.

FWIW I would also check the other intake butterfly screws.
J

If you like the vehicle then all of that becomes irrelevant.

Pull head where screw is and remove it then checked damage. If minor remove screw put back together. Cost is head gasket and intake gaskets with new screw
You must log in or register to reply here.

Aug 9, 2022
Gasbuggy
B
Replacing door seals on an older car?