Ever hit a water meter with your riding mower?

Friend of mine hit his gas meter and knocked it out of service. No fire, but it sheared the coupling on one of the lines. I had to go and buy the fittings and repair the meter so he would have gas. Luckily no fire or other damage. Well, that was not enough for him. The other day he hit his water meter with the blades. Needless to say the Cub Cadet zero turn stopped immediately, motor stopped instantly. This is a belt drive hydro mower. After some initial troubleshooting, I determined that at least one rod was broken. I popped the motor off, and it looked like something exploded inside. Both rods broke, one of the wrist pins was laying in the block. Part of one rod was still attached to one of the pistons, but I could see into the other cylinder, but since the wrist pin was out, I'm a guessin the piston shattered, We didn't pull the heads to see the cylinder damage as what's the use, this thing is trashed. I didn't disassemble anything, what you see is what was laying inside the block, after I removed the pan. The crank journals were ruined. On a high note, the cam and lifters looked perfect! This is a 23.5HP Kohler Command vertical V twin, they just don't make 'em like they used to. Moral of the story, don't hit your gas meter, cause then you'll hit your water meter and if it didn't stop the mower, the only thing left is the electric meter. 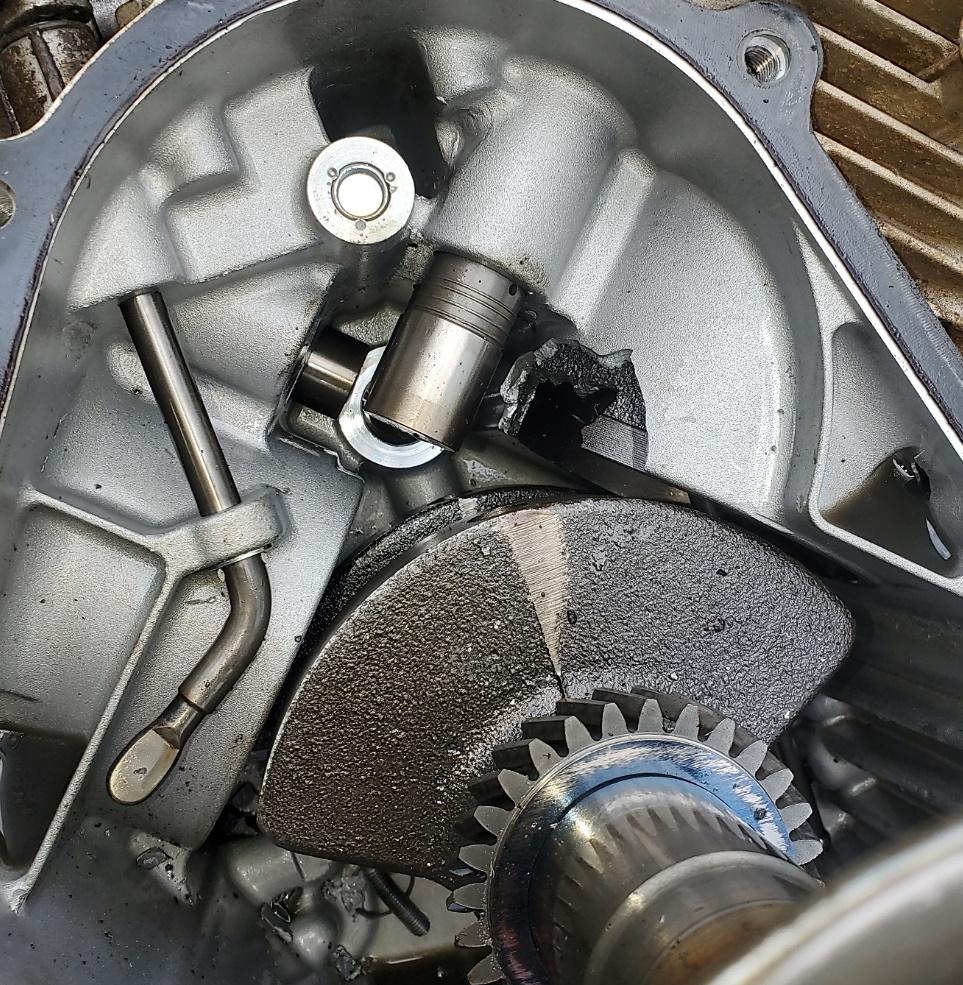 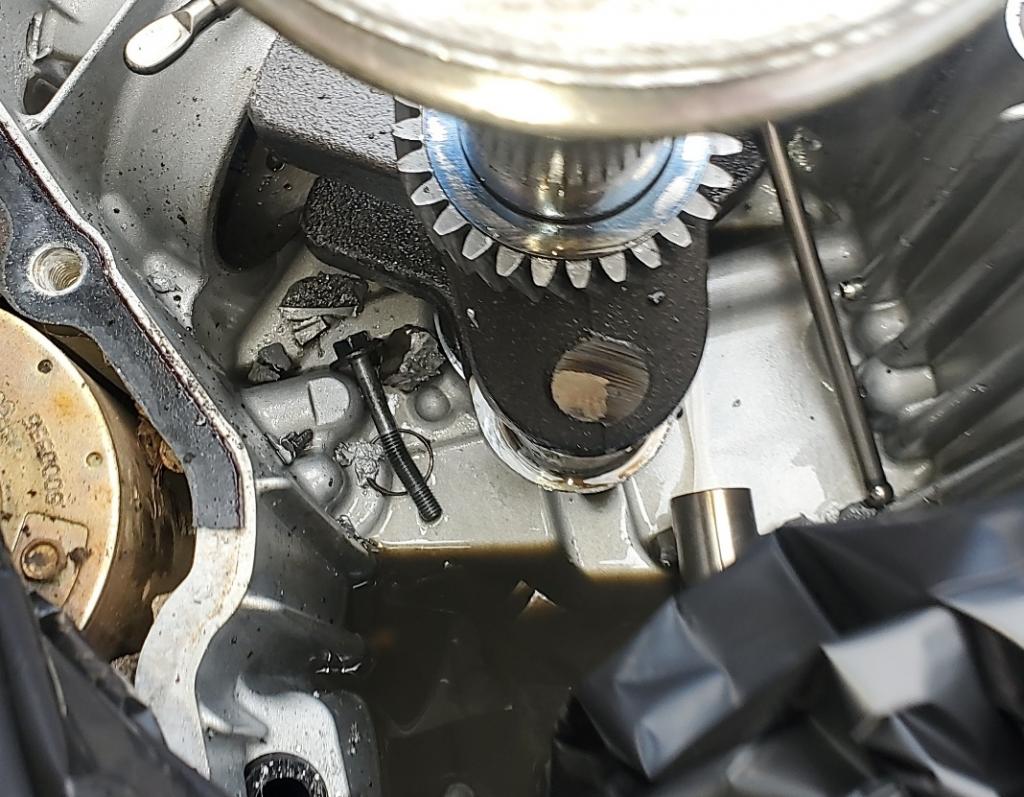 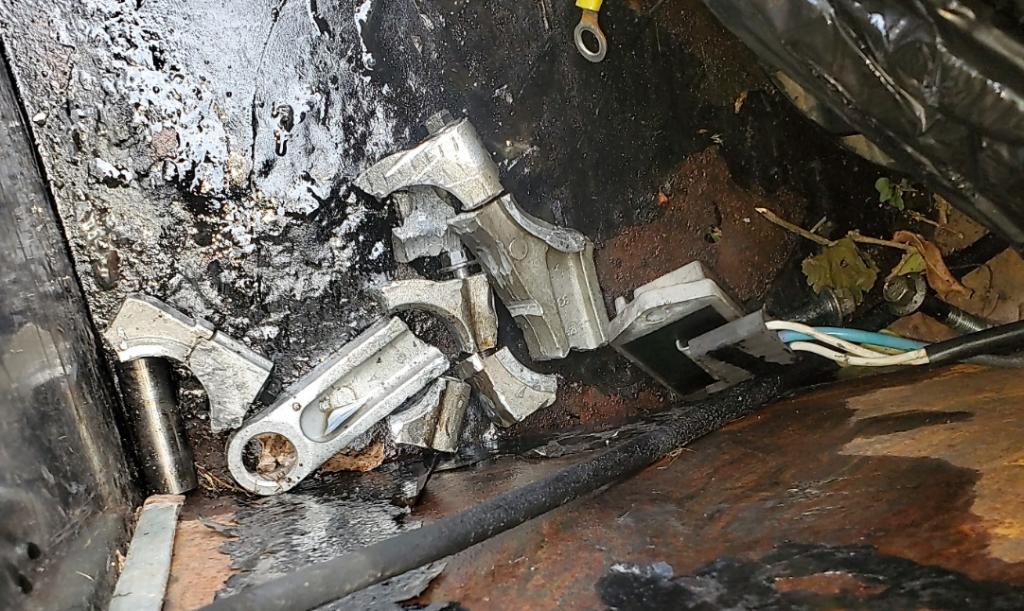 Nope! I think your friend may need to pay someone to cut his yard. Roundup and string trimmers save a lot of headaches.

Mowing too late one night before a storm, I caught the satellite dish with my zero turn rollover bar. Oops! Destroyed the dish. Haste makes waste.
J

Was it his first time on a zero turn? Every now and then you have to let go of any of those two levered machines to scream and take a breath when you aren't used to them. At least mowers don't buck like skid loaders.
D

My water meter/valve tends to 'heave' during the winter in Wisconsin. Close calls with blade scraps one year. Next year hit it hard with the blade and bent the blade. I rolled my truck over the meter/valve pushing it back down enough to clear the mower deck.
B

Oh did I forget to mention he operates a lawn care business? Silly me. Luckily it was his home where he hit both meters.

Wow! That motor is a mess. Maybe he was using the wrong oil

Yeah I did! It was with a $99 Walmart 20-inch MTD B&S special. No harm to mower. The water meter exploded like legos, little gears and dials everywhere. Customer had a beautiful garden that he kept watered. It was a seasonal residence so the plumbing was ground level, just 1-inch PVC laid willy-nilly everywhere. He didn't act too bothered, like he knew he'd get a free pass from the water people. Was a VERY small town.
C

No but I did run over a couple that were burried in the sand when I was delivering trusses.
T

Originally Posted by MParr
Nope! I think your friend may need to pay someone to cut his yard. Roundup and string trimmers save a lot of headaches.
I take care of my yard because of stubborn pride.....but yeah - he should let someone else handle it.
N

Originally Posted by walterjay
Wow! That motor is a mess. Maybe he was using the wrong oil

That's what he gets for not asking for a recommendation here .

Thank goodness both are indoors in every home Ive lived in...
J

The water meter around here is in a hole on the ground. The only way to hit it is if the whole mower have the power to go under the ground. LOL!!! Never drink and mow.

Originally Posted by JHZR2
Thank goodness both are indoors in every home Ive lived in...
Same here. There're electrical leads to an outside non-contact-like device. I assume they can scan without having to actually read the analog meter.
C

Yep, hit one with my pushmmower one year. The boxes around here have heavy cast iron lids. I was trying to slowly lower the mower over the box to avoid having to run the trimmer around it and went too low. Bent the crankshaft. I hammered it back to straight and it runs to this day. Granted, I don't use it often but it runs fine, doesn't vibrate or leak anything. And before anyone mentions it, yes I'm aware of the stresses involved, metal fatigue, and the like and how the crankshaft is going to explode one day and end the world.
L

Carnage!! Over the years of repairing mowers I've seen mostly damage from people hitting stumps, big rocks, and curbs. It usually just results in a bent crankshaft or blade. The worst I've seen was a guy with a commercial zero turn who ran over some barbed wire. That stuff was wrapped so tight around the blade spindles I had to cut it out with a grinder.
You must log in or register to reply here.

Jul 4, 2020
motor_oil_madman
B
Anyone ever used one of these utility trailers from Northern Tool?

May 19, 2020
bchannell
Y
Husqvarna AWD with a Honda engine