I was putting my newish 150 piece Chinese Craftsman set to use the other day when my Jeep wouldn't start. I went to grab the 10mm wrench and had a needle like burr become imbedded right into my left index finger. Of course this was in a public parking lot on a humid 85 degree day which just added to the drama. Not wanting to start a Craftsman hating thread, but just wanting to warn others about the potential issues. Might not be a bad idea to take some fine sandpaper to the tools either. Bought the set for $45 around Thanksgiving. Lifetime warranty. Still not a bad deal. Turned out to be my neutral safety switch by the way.

Look for the Craftsman made in Taiwan or USA. My Jeep will not start about once a month in P. I move it to N and it starts fine. While annoying, not enough so to have me fix it.

No surprise when you get 150 pieces for what 2 good small size wrenches cost. If you were posting this about Snap-On, Hazet, SK, etc that would be a bit disturbing.

Well in their defense, they are normally about $150 without promo codes and holiday specials. It was a good deal at the time even compared to HF. The quality sure has dropped though. Even one of my ratchets had rough edges to where I exchanged it. I have a much larger American set the parents bought me for Christmas a few years back that stays in my tool bench. It has held up great for my shade tree mechanic needs.
M

They are decent tools for the shade tree mechanic.
W

CRAFTSMAN has REALLY taken a turn for the worse over the last 10 years......when it comes to "consumer grade" hand tools I end up buying KOBALT or BOSTICH anymore. To be honest with ya MAC has taken a downhill slide over the past 5 years also.....
B

Dont enable the idiot penny pinchers at sears and buy their junk chineese tools, problem solved. The quicker they go out of business, the better. They are dead to me since they took the tools offshore. People still pay made in USA prices for their made in China tools. If im buying Chinese tools, im paying chinese prices (harbor freight, etc)
R

Originally Posted By: wsar10
CRAFTSMAN has REALLY taken a turn for the worse over the last 10 years......
Spoken for truth.
K

sears is dead as far as i am concerned. all the nearby stores are gone. costs more to travel to one than tool is worth. even the kmarts are gone.and now they stamp the name on harbor freight grade stuff? they lifetime warrenty their stuff too. goodbye sears it was nice knowing you.
C

somebody on garage journal got sliced by a Chinese craftsman too

I remember Sears catalogs from the 1970's before Walmart took over the retail world.
D

While I'm not quite ready to pull the plug on Sears just yet, I'd be a liar if I said that I havent noticed the quality of some of their tools has gone down. Their wrenches seem to be about the same as they've always been and their vice grips are still made in the USA, but their polished ratchets are a complete 180 from what they were just a few years ago. I had one of the polished, slim profile 3/8" ratchets where the square socket adaptor had snapped off of the head of the ratchet. I took it in and got a replacement. The difference between the two was like night and day. The one that broke I had purchased in 2004. The chrome plating was very well done and the handles were nicely engraved with "CRAFTSMAN" on one side and "MADE IN USA" on the other. The replacement's chrome plating looked cheap and rough by comparison. The engravings on the handles looked like they were engraved with a rusty nail. It had the Craftsmen logo on one side but on the other side, "MADE IN USA" had been replaced with what appeared to be a stock/catalog number. The final thing I noticed is that the ratcheting gear didn't seem as smooth and fine (like a Snap On) as it did on my original ratchet. It was rough and clunky, like it didn't have as many teeth on the gear. The replacement ratchet works, but it literally feels like I should have gotten a partial refund with the replacement as the quality was not the same.

My fifty something year old Craftsman tools will outlive me. They all say "Made in the USA." And I have two Vise- Grips that say made in Dewitt,Nebraska. Not letting them out of my site. Wouldn't trade them for ten pair of Vise- Grips now made by Irwin(China of course).
K

Went by the Sears in Hackensack, NJ today and noticed that the freestanding building which had been the seasonal products during my youth and later their "Brand Central" appliance store, was being vacated. Appliances are now in the main building. I must take a small tour and see what's being shuffled around. Will the automotive section- in yet another separate building-move into Brand Central? What was removed from the main building to make room for the appliances? Does this in any way fit the predictions of several BITOGers that Sears is withering? Kira

Originally Posted By: Kira
Went by the Sears in Hackensack, NJ today and noticed that the freestanding building which had been the seasonal products during my youth and later their "Brand Central" appliance store, was being vacated. Appliances are now in the main building. I must take a small tour and see what's being shuffled around. Will the automotive section- in yet another separate building-move into Brand Central? What was removed from the main building to make room for the appliances? Does this in any way fit the predictions of several BITOGers that Sears is withering? Kira
That big seats in Hackensack is classic. The design of that store, I'm sure is used all over, but the only other one I've seen is in LA. My father and I used to go there for tires, and then get some peanuts from the candy counter. As for Sears, it is HF at USA prices. I haven't seen prices come down commensurate with the lower cost of the components. I've ordered more SK stuff, and started using my local snap on truck now as a result. Bummer because that costs me more. Unfortunately this is a self fulfilling prophecy, which the hardcore wm and HF type shoppers have caused. Both places can have some gems. Both places can be interesting to walk through. But when they become the to to vs sears, the. Sears has to match price point, and what do you think happens?

I'm glad I still have my Husky and BernzOmatic socket wrench sets from 1975, the ones that came in red metal cases. Made in the USA.
1

If you want American made tool truck quality at non tool truck prices check out Wright Tool. All of their stuff is made here in Ohio and the wrenches are top shelf. 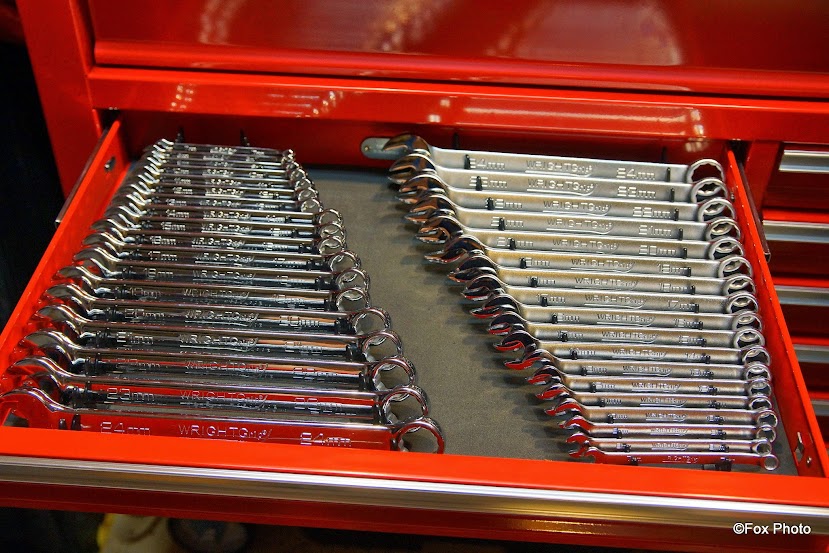 They manufacture great ratchets and sockets too.

Many items are available on Amazon or Harry Epstein http://www.amazon.com/s/ref=bl_sr_hi?ie=UTF8&field-brandtextbin=Wright+Tool&node=228013 http://harryepstein.com/

Those Wright tools sure are pretty.
P

I am trying to buy as little from China as possible. I read that Chinese fish (farmed) has little oversight and may be fed feces....ECHHH
You must log in or register to reply here.