The other day I was driving on the highway and during a lane change I looked over my shoulder and apparently didn't see something I hit. It was not a car or an animal, the sound was so bad I thought I ran over a bike or hit a stove laying in the middle of the highway. Couldn't see anything in the rear view so I just assume it was a really big pothole. Put the car up, couldn't see anything under the car, no body damage, nothing. Today I notice an odd mark on the sidewall of the tire that hit whatever. It's as if something rubbed the dust off the sidewall. I pull the wheel cover back a little right near it and notice the lip of the steel wheel is bent. The reason I checked the wheel again today (and found the problem) is because after the hit I've noticed a consistent vibration in the steering wheel past 70mph. Could appreciate your help for answering these questions: 1. Does a bend always need to be fixed? I don't know if it's just the very lip of the rim that's bent or the actual barrel of the wheel itself. It looks extremely minor. Can it just be balanced out with more weights? 2. I just want to fix the balance issue. Not sure if the balance issue was caused by internal damage to the tire, a thrown weight or the minor bend on the lip or possibly more of a bend I can't see. 3. How much would you think it would cost for a tire shop to fix a bent rim? What exactly do they do to fix the bent rim? This is a steelie. If it's going to be more than 50 I might as well just buy a new steelie, I'm due for new tires anyway. I'll get a picture for you guys soon. I'm convinced whatever it was, I happened to hit it with just the outer lip of the wheel (hence why the sidewall was scraped). That's probably the worst place to hit because it puts more leverage on the wheel width wise? That's also probably why the hit sounded so harsh and bad, it contacted the wheel directly (it literally sounded like crunching metal LOL). If it had gone under the tire, it would have been a dull and softer blow because it would have hit the tread and not the wheel.

Why not just take it to a tire shop and have them see out of balance it is? They'll be able to tell pretty quickly how bad it is.
N

Hmmm I may try fixing the bend myself also if it's just dismounting the tire and torching the steel until it's soft.

I agree about taking it into a tire shop. If it noticeably wobbles on the balancer it's time to replace. Steelies should be pretty cheap anyway. I've had a slightly bent alloy rim on my Accord for years. I left it alone since It holds air fine and doesn't cause a significant shimmy.
E

And you might be able to get a matching wheel from a wrecker. It wouldn't necessarily have to come from the same year or even the same model. The wrecker should be able to tell you which wheels would match. We got 3 matching wheels for my '81 Celica from the wrecker when my daughter spun the car and exited the freeway backwards. Much cheaper than new ones.
K

My friends and I have beaten small dents out of steel wheels using a large hammer and wood. We had both seen it done. Give it a shot. True out what you can see then go to the tire shop. You've nothing to lose. 3 cheers for steel wheels. Love 'em.
A

Just swap wheel with the rear one first before taking it anywhere. You might decide not to do anything after that.

I'm going to try what Kira said, bang it out with a wood block. Once I get the wheel off I can look at it overall to see how bent it actually is.

if it hit hard enough to bend a wheel there is a significant chance the tire is damaged.
C

Originally Posted by NoNameJoe
Hmmm I may try fixing the bend myself also if it's just dismounting the tire and torching the steel until it's soft.
Don't heat it. Bend it back at ambient temp with a sledge.
R

If the wheel is bent, then no amount of "balancing" is going to fix your issue. However, if its only a very slight amount then a "road force balance" where the wheel and tire variations are used to try to cancel each other out could help. In your case I think anything short of replacing the steel wheel is a waste of time. I have had decent results in buying used wheels from junk yards or eBay- just make sure there is no lip damage, and have it swapped out at a place that does "road force balancing" to check the straightness of the wheel. I really dislike the term "road force balance" as it does not fully describe the process and can be misleading.
Last edited: Aug 25, 2019
G

Steel wheels are cheap. Just replace it and move on. Maybe try and find a used oem one at a wrecker. Aftermarket ones often don't work with the factory hubcap. Cheapest fix if wheel still holds air ... move it to the back. You won't feel the vibration thru the steering wheel, and probably won't feel it at all.
W

Local tire shop has straightened minor bebds for me using hammer or a " bod bone " shaped tool . Cost only slightly more than a flat repair .
R

Slowly spin the wheel and check it against a stationary reference point. If it's on the front, jack up the car and get a brick and set a pen (or metal rod etc) so the tip is almost touching the edge of the rim. Slowly rotate the tire and see if the gap increases considerably. You'll need to do this on the inside and outside of the tire. My son has a bad vibration so he took the tires for balancing. Problem persisted. I checked the tires as mentioned and found one to be bent almost 1/2 inch. He had steel rims, we replaced it -and problem was gone. Ray

I had a bent rim from hitting a pothole. It would loose air if a certain spot on the wheel was pointing straight down. Replace it if its bent. Have the tire shop check for damaged tire belts.

Originally Posted by atikovi
Just swap wheel with the rear one first before taking it anywhere. You might decide not to do anything after that.
Wouldn't this result in unnecessary wear on that rear strut? That's assuming the OP wouldn't feel the vibration (unlikely, IMO) I like the idea of having a shop try to bend it back and then balance it, then check the wrecker for a spare if they can't. Worst case, new steelies are super cheap.
A

Originally Posted by gathermewool
Originally Posted by atikovi
Just swap wheel with the rear one first before taking it anywhere. You might decide not to do anything after that.
Wouldn't this result in unnecessary wear on that rear strut? That's assuming the OP wouldn't feel the vibration (unlikely, IMO)
If he wouldn't feel the vibration it wouldn't be bad enough to wear the strut.
B

So anyway here's an update. About a day after my original post I pulled the wheel off to get a look and attempt to straighten it. Here's a picture I took of the damage: 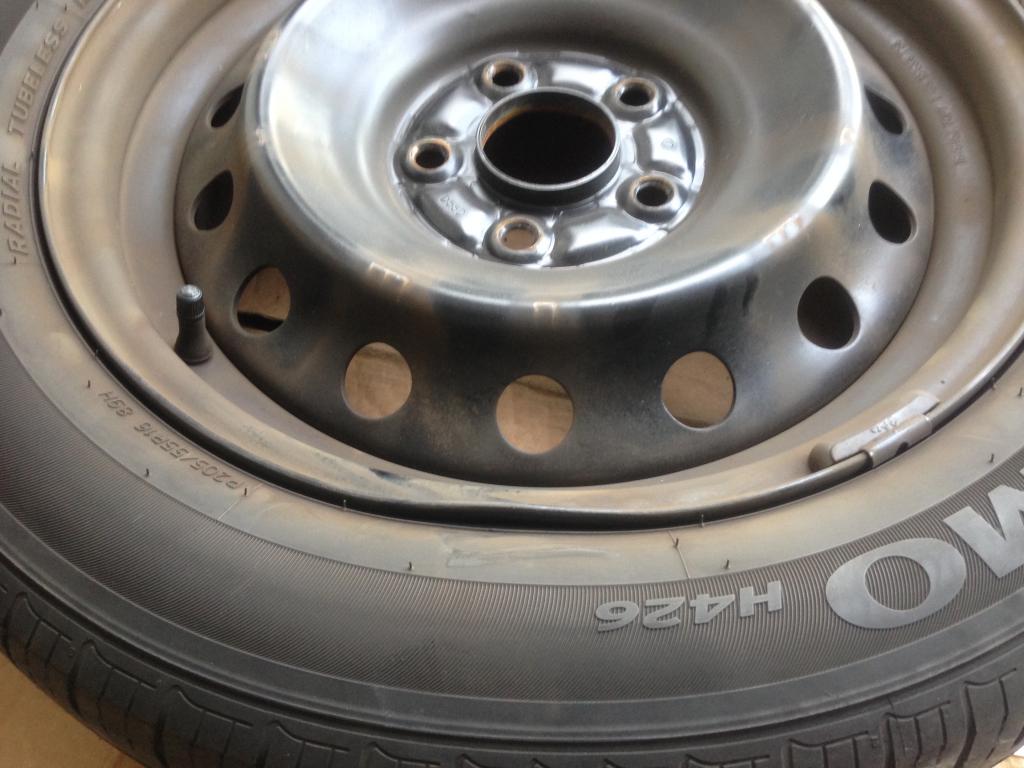 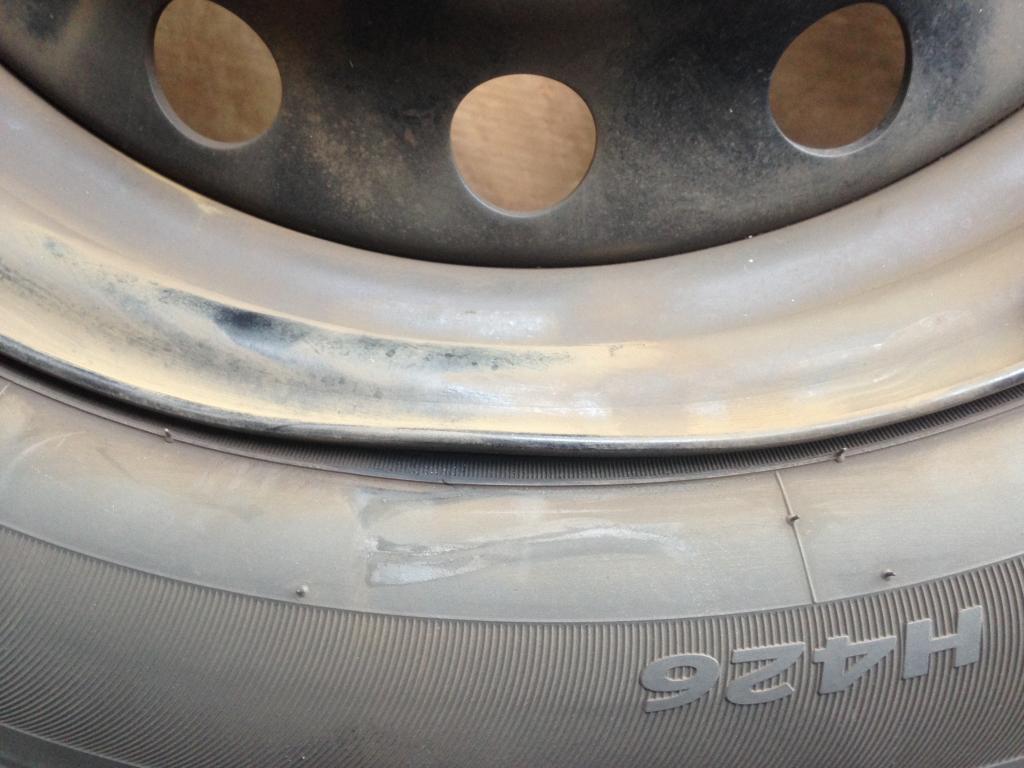 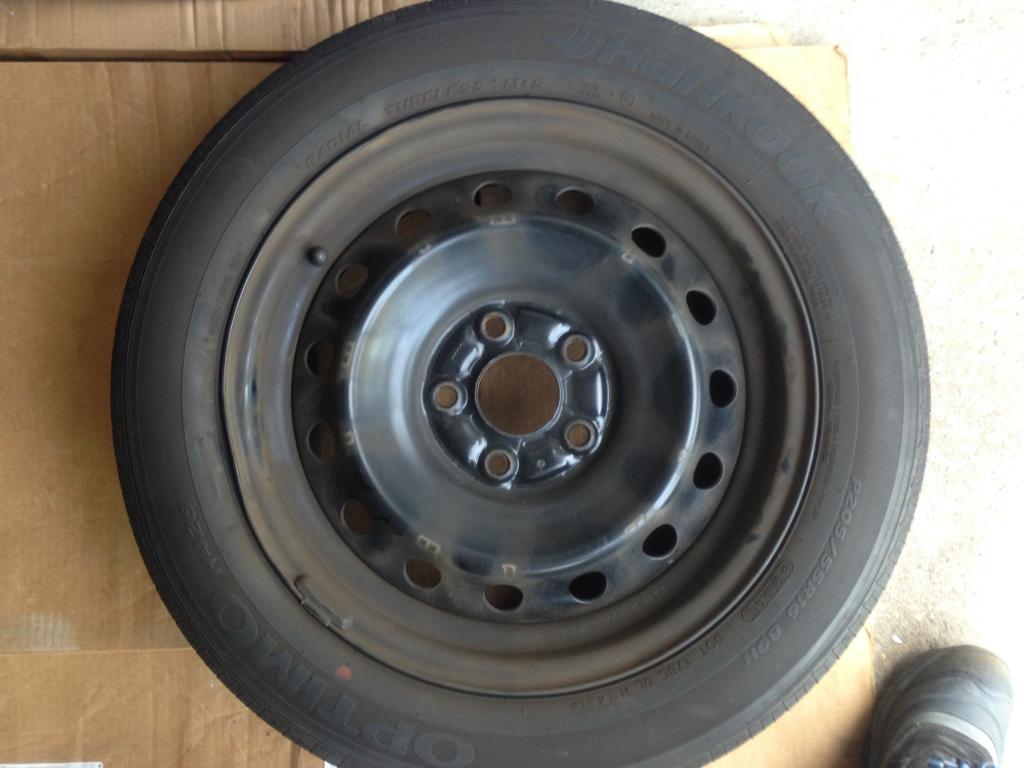 There's a shot of the damage at an angle that makes it obvious, a shot up close and an overall shot so it shows the damage relative to the wheel. Overall it doesn't look bad and no air was lost (it's been a few weeks since the blow). I could just replace the wheel because a steelie is cheap relative to alloy but it's still 65.00 without shipping even factored in, why pay that when the wheel is passable? So I took a bunch of wood blocks, a 4 pound deadblow hammer from HF and went at it. I must have whaled on it for thirty minutes and made a small improvement. The wood blocks kept chipping on me and the hammer kept slipping at weird angles. I don't know if I didn't make much of an impact because the steel was too hard, the hammer was deadblow versus just straight metal or because the wood blocks kept denting and absorbing the blow. I will say that despite the small improvement, ride quality has improved greatly. It's virtually unnoticeable now, I cannot tell whether it's the road surface or the wheel any more, where as before it was extremely noticeable. Air loss still does not occur, at this point I could leave it alone and be fine with it. Especially since I'm due for new tires at the end of the year and I bet even a little balancing could make it even better than it is now (which is hard to imagine since I no longer feel anything). I will ask though whether there's something I can do to straighten it out even more. Not because I have to but because staring at that will annoy my OCD when I could just fix it lol. Should I go with a bigger hammer? All metal like a sledge instead this time? what kind of wood and in what shape? I used square ended wood rods of unknown material like you would use for a fence. Here's the after. It may look like I didn't make a difference but I did because I used a bootleg feeler gauge like setup before and after and I can tell I closed the gap this way. 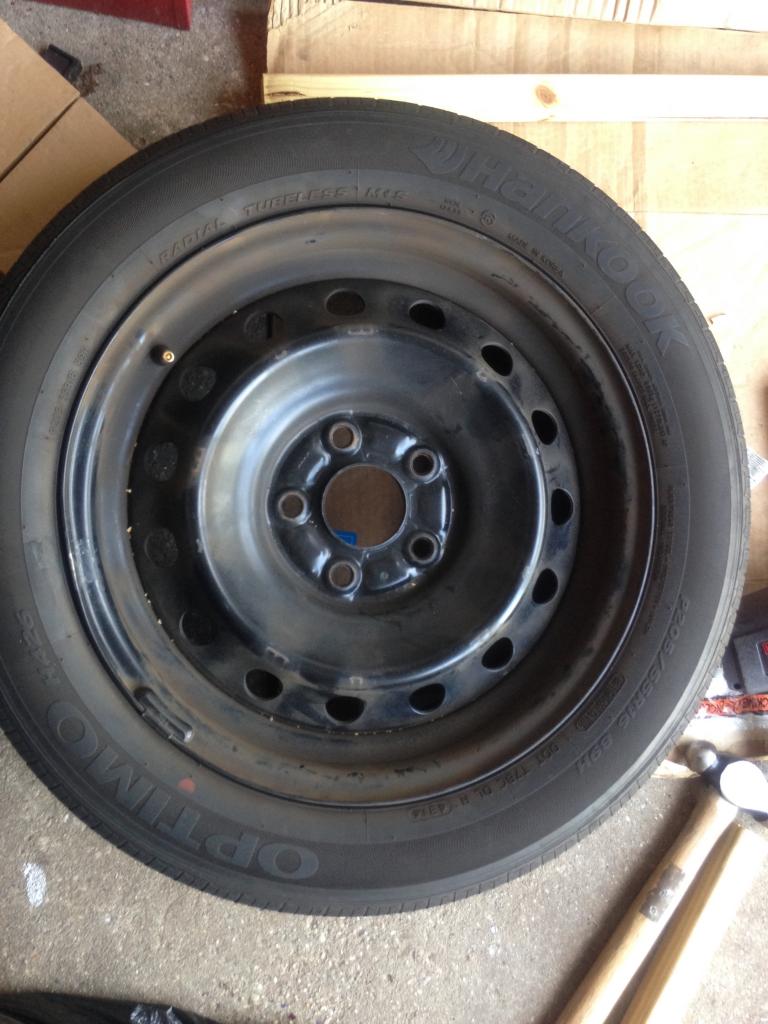 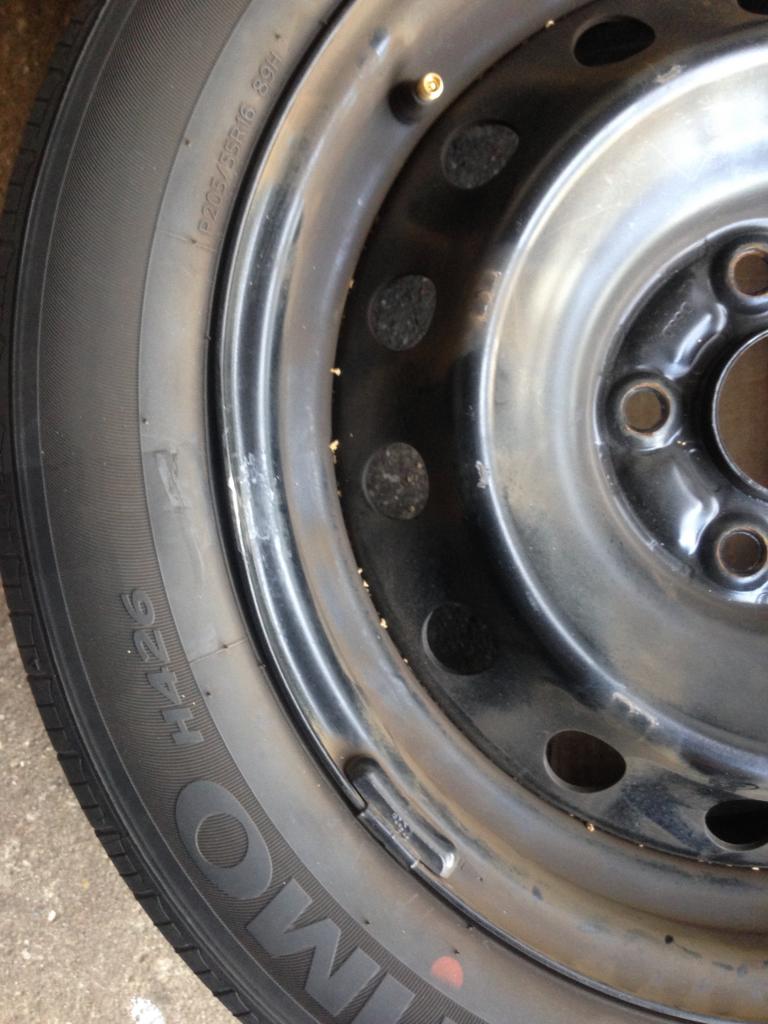