After searching near & far, I finally found a set of plans that I liked and met my needs. Far too many were just flimsy without decent storage or a large enough top. I even looked locally for something already built. More of the same: incomplete, $$$$, imported junk. The design I chose has wheels to easily roll it around on the concrete back porch, two large swing doors revealing lots of inside storage, a two foot wide, deep-drawer to hold grill tools, spatulas, old newspapers, lighter, heat-resistant glove, etc. All of that stuff I have to gather first whenever I decide to fire up the grill. Now it will all be in a single place. Finally the large top is tiled so it'll be durable, hot pans sitting on it won't be a problem and it'll last forever. Rather than grout the tile, I'll use NP1 urethane sealant in a dark color meaning no stained, chipping grout over time due to inevitable spills especially grease & oil. Friend allowed me to use his DeWalt construction planer for an extended period of time. I needed it as I planned on using recycled 25yr. cedar wood from an old fence. Free for the hauling but it needed lots of prep to make it usable: Wire-brushing to remove sand and dirt, then nail pulling and searching with magnets, then cutting out the rotted sections, then finally running what's left through the planer. I then used a bandsaw to resaw 4x4's to 2x4's and 1x4's. I was working with full thickness wood rather than common dimensioned lumber. Though thoroughly 'seasoned' after years in the weather, some warped after cutting due to stress relief, so out came the hand plane. I stained the interior white to keep it from looking like a dark cave. Stain will never peel nor flake off and cleans up well having tested it previously on some trellis' left outdoors for years in the elements. Even the underside is stained to seal the wood. The outside surfaces + the tile-top surround was finished in multiple coats of oil-based polyurethane, which was then flattened and polished to a satin, soft glow with incredible smoothness. As the back porch is covered, it will never be exposed to sun or rain but it will get dirty and covered in pollen like anything else. I can wipe with a damp sponge or just a rag. All of the wood grain has been sealed so there's nothing to catch a rag on. I left a bit of space between the vertical slats to provide ventilation in the storage area and for the wood to expand/shrink. I discovered early on there were several mistakes in the published plans (in a popular woodworking magazine no less...) This meant going forward everything had to be 'cut-to-fit' which takes far more time. I'd thought about building it in SketchUp first. That would been a good idea given the published errors. Next time I'll do that. When assembling the top prior to tiling, I decided to hold it on with machine screws and threaded inserts. More time to do this, but more flexibility too. I got lucky with the tile color as it's no longer being made, had to be ordered in from another warehouse, cut down to 6x6 pieces, etc. After searching many other manufacturers, I couldn't find anything else like it. Long awaited photos: 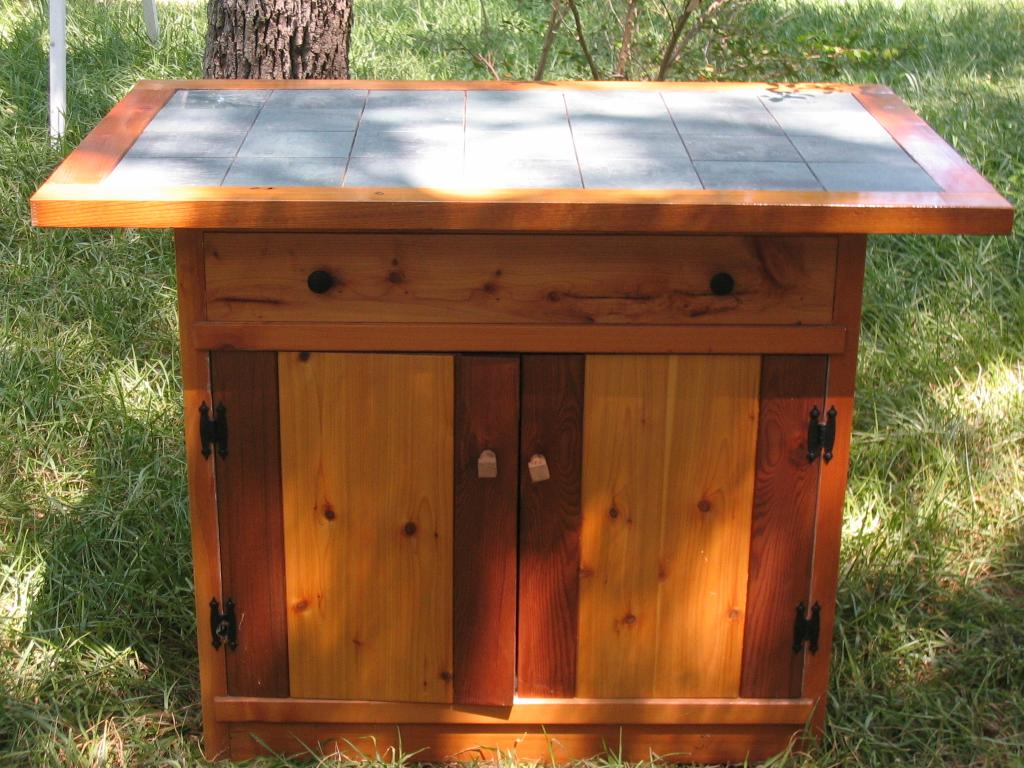 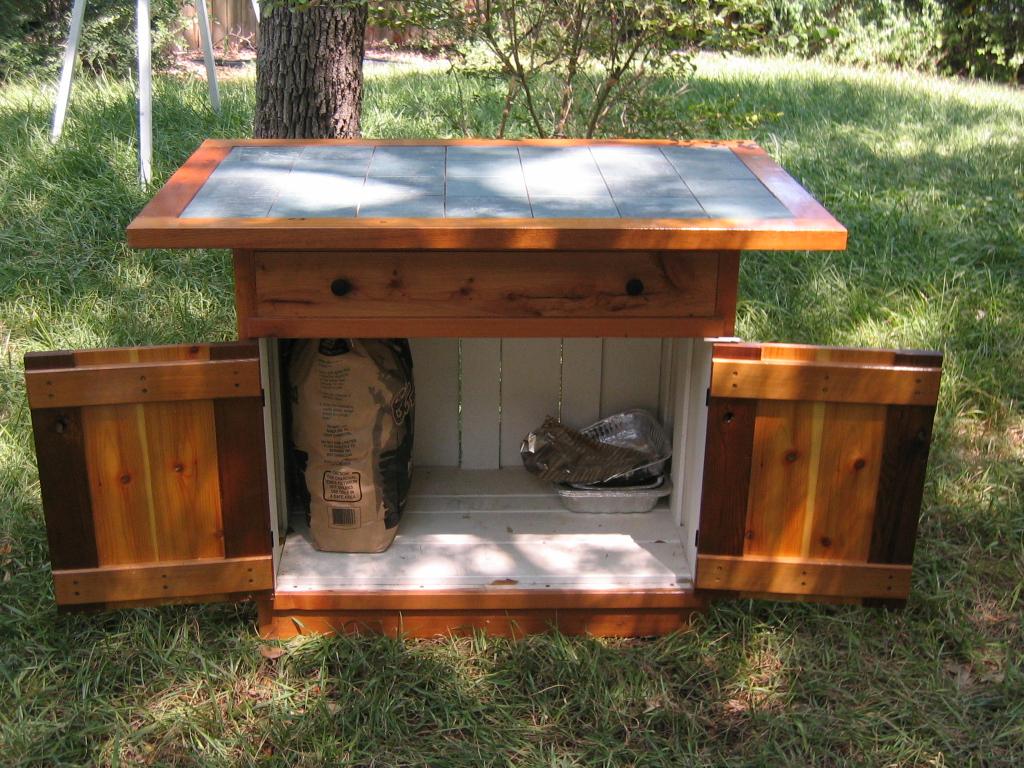 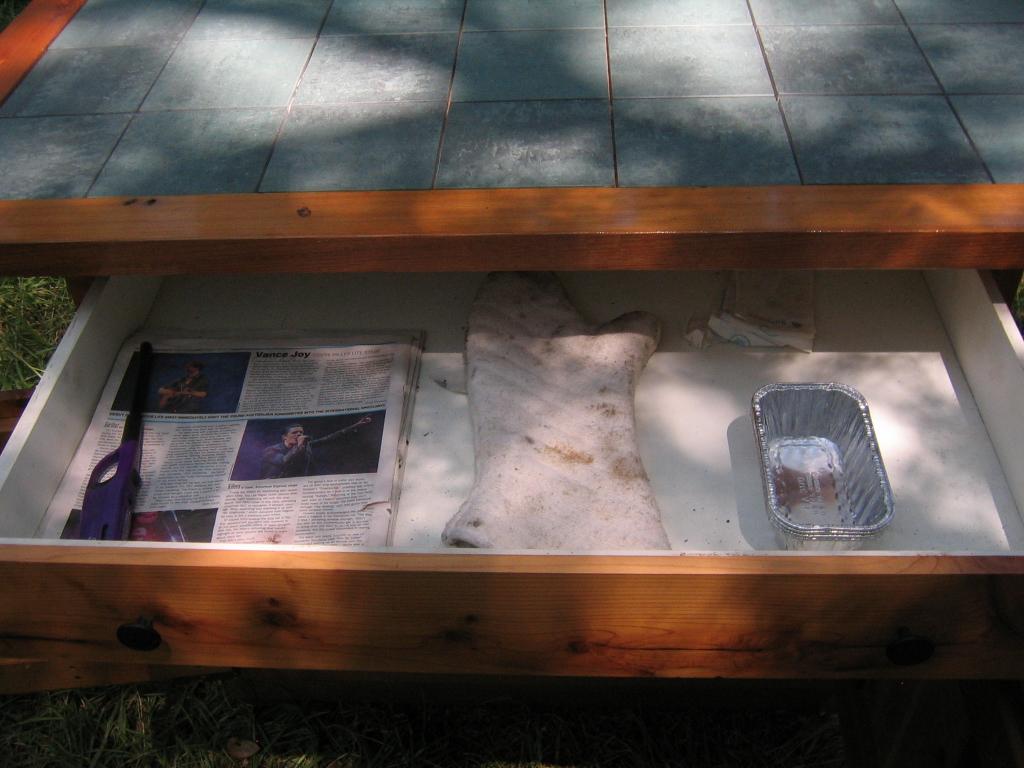 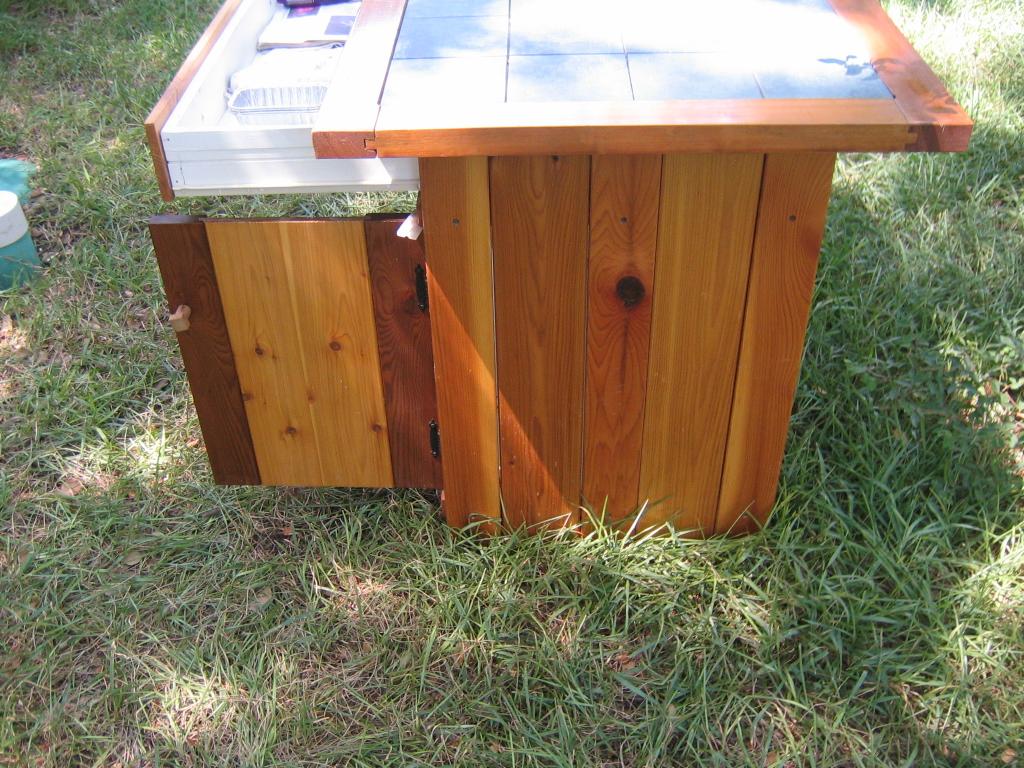 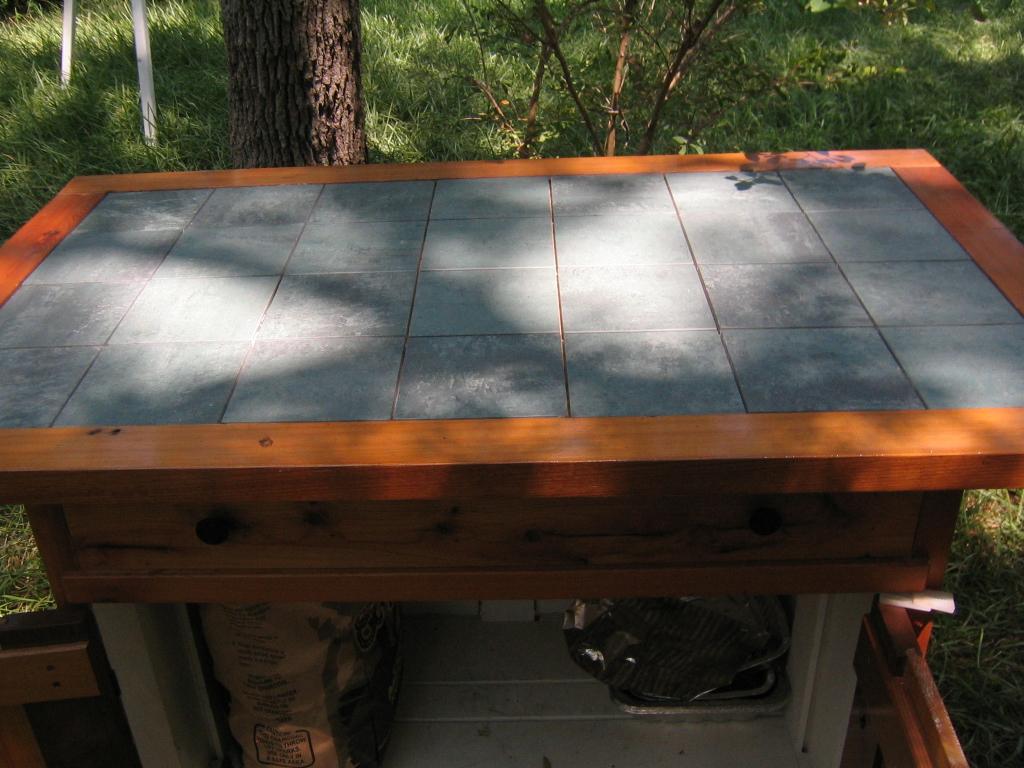 One improvement I may make is to replace the 24" deep drawer slide with a full-extension version due to the top overhang.

You going to put any kind of base under it?
S

Thanks. Forgot to mention the dark wood came from the old 4x4s. Nice contrast to the newer cedar 4/4 boards. The knobs are not finished yet, just stuck in there. The holes they fit into are close because those two boards came from the same piece of wood I resawed. I could have made them perfectly even, but decided to go with what Mother Nature provided. I cut a 1x1 or so, then chucked it into a 4 jaw lathe chuck and turned it round to precisely fit the holes in the wood. I have some earlier photos (somewhere) showing the carcass framework being built. I'll have to dig them out and post.

Nice job. I have cut way down on grill cooking when I stopped eating read meat about a decade ago. I have ha one burger all summer and no hot dogs. So not zero read meat, but close. Thus when grill shopping I could not justify a $500 Weber.
R

Originally Posted By: Donald
Nice job. I have cut way down on grill cooking when I stopped eating read meat about a decade ago. I have ha one burger all summer and no hot dogs. So not zero read meat, but close. Thus when grill shopping I could not justify a $500 Weber.
My next BBQ purchase will be this..but I love my red meat!
S

Originally Posted By: Rand
You going to put any kind of base under it?
It has a base with wheels. I hauled it into the grass for better photo lighting and a nice green contrast with the wood & top.
S

Looks like just adding additional photos is verboten. Looks like upload completed, then they were never displayed in "preview". C'est la computeur...... Well..there's one of them. Wonder what happened to the other two?
S

This will be the third time I've attempted to upload the rest of the photos......