Anybody Switch from Electric to Gas Appliances?

In terms of stoves I prefer the burners gas and the oven electric or even convection/ microwave hybrid convection.

Sadly you don’t get many options.

I designed a nearly passive house (been sitting on a drive 15 years) that could work off grid with only a gas hookup and all electric would be solar.

In this area (currently at least) gas makes sense for everything and an electric hookup is just wasted money.
F

Re: hot water during a power failure - don't overlook the need to run the electronics and powered venting of the water heater. Of course, you're asking much less of a generator for these functions vs. using electricity to heat the water.

As for the range, my preference would be gas as well, but the decision by the builder to go electric is less of a head-scratcher than the electric water heater. There seems to be more chatter in the media (for whatever that's worth) lately about the effect of combustion byproducts being released into the home by gas cooktops/ranges. That issue can presumably be dealt with by way of ventilation, but it's something to consider.
B

PimTac said:
The question is how long you plan to stay there. With a 7 to 10 year guesstimate that comes across as the most as you wrote it I would not switch. If the opportunity arises like a water heater failure then I would consider it then.
Click to expand...

For resale an electric dryer and electric water heater in a house that has a natural gas line going to it looks odd, stupid, or something that's going to hurt resale value.

I say keep an eye on your NG service line size because if you switch everything over plus install a generator or use a tri-fuel gen, that can all add up to a larger load than some meters can supply.

My only hesitation in all of this is the fact that this is our first house.

Just hesitate to do too many upgrades when we’ll be moving, realistically, within 7-10 yrs.

I did a 6 burner propane cooktop and remote propane wall oven. Along with a propane dryer (because they are hot) and 50 gal propane water heater. At first I had a 250 gallon in ground tank, but was being charged $7+ per gallon (in total with delivery charges). I ripped that out and now use 2ea 60 pound propane bottles strapped to the outside of the house, that I fill at the local hardware store, for a fraction of the cost. I spend about $120 per year for propane now.

The black gas pipe installation inside the house was way more expensive than I thought it would be.

Anyway, I love the current setup! Note: The hybrid water heater only uses about 600 watts and any 240V generator can run it with ease. 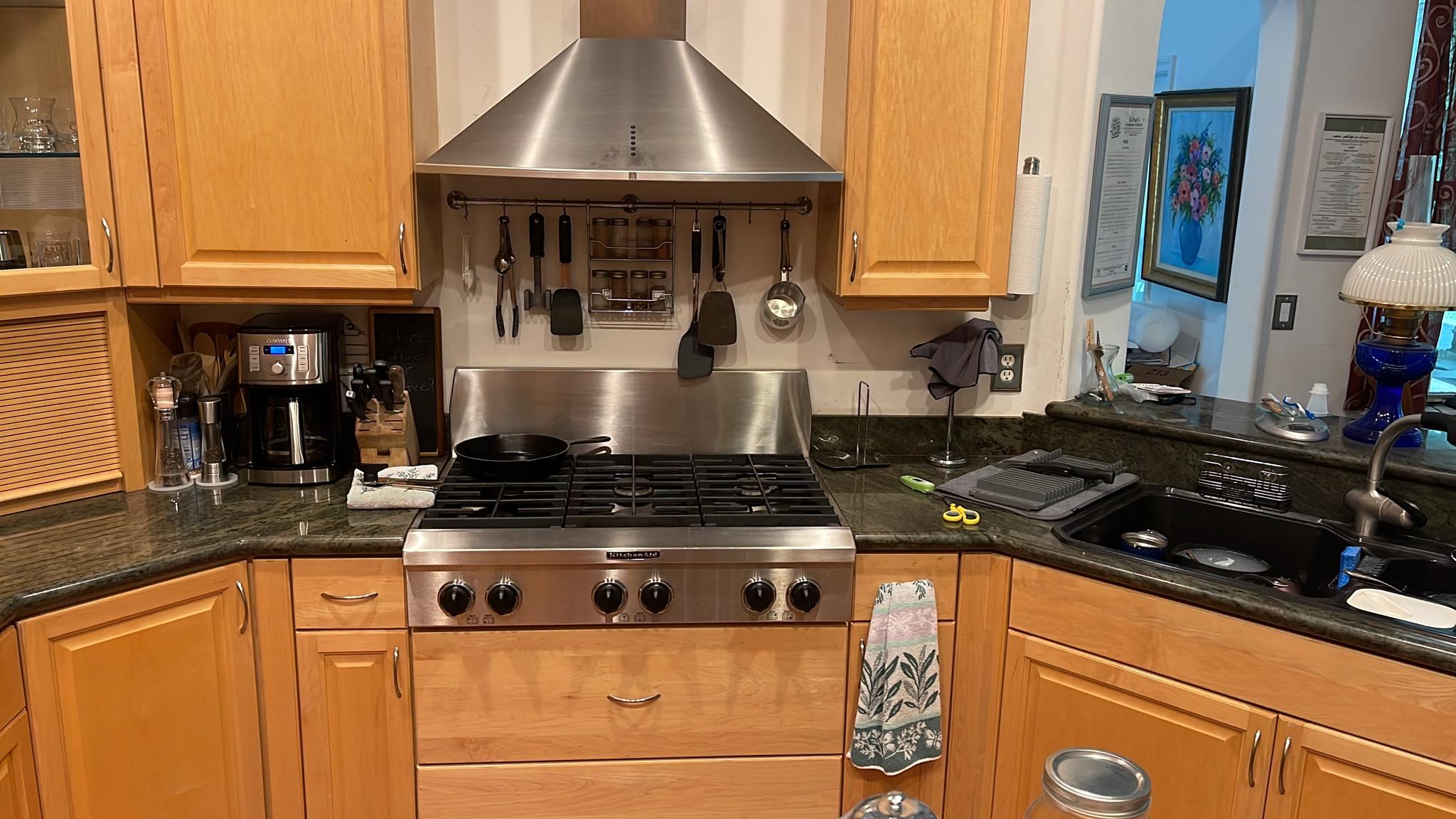 My first house was gas dryer and gas stove. When we moved, the new house had electric for both. Wife made the edict, so we switched to gas.

Was really pricey (I thought) for the company to run 50' or whatever of new line, but once done, it was done. And I wasn't about to do that job, seemed too risky (I draw the limit at hooking up). Happy with it now (and now I *know* that my 200A service is sufficient if I ever get an EV).

Hot water is off my oil fired furnace. It does have a hot water tank but it's passive, no element in it.
T

john_pifer said:
My only hesitation in all of this is the fact that this is our first house.

Just hesitate to do too many upgrades when we’ll be moving, realistically, within 7-10 yrs.
Click to expand...

The exterior mount on-demand NG water heater is a potential solution but would most likely require a service line size upgrade, especially if you did the clothes dryer and/or generator/grill feed.
T

We have a 1980ish house that was built with gas furnace and water heater, and electric range/dryer. We converted the range to gas (pretty easy to do since the utility room was directly underneath), and added a gas fireplace (definitely nice to have). Total gas bills are pretty reasonable, even in cold months (furnace is a nice 95% 3 stage, but water heater is a standard efficiency atmospheric vent).

If I was in your situation, I’d probably upgrade to a gas range, and leave the water heater and dryer alone for now. Of course, the math changes if you’re building a new house or something, but it’d probably be harder to justify ripping out an operational dryer and water heater than a range (assuming you prefer cooking with gas, as I do).
T

supton said:
My first house was gas dryer and gas stove. When we moved, the new house had electric for both. Wife made the edict, so we switched to gas.

Was really pricey (I thought) for the company to run 50' or whatever of new line, but once done, it was done. And I wasn't about to do that job, seemed too risky (I draw the limit at hooking up). Happy with it now (and now I *know* that my 200A service is sufficient if I ever get an EV).

Hot water is off my oil fired furnace. It does have a hot water tank but it's passive, no element in it.
Click to expand...

Insurance is probably half the cost. The utility is supposed to pressure test your lines before hooking up to the meter service. 3/4 black iron pipe is expensive these days and it is hard to find peeps that want to crawl space dive.

I say keep an eye on your NG service line size because if you switch everything over plus install a generator or use a tri-fuel gen, that can all add up to a larger load than some meters can supply.
Click to expand...

True, or you can just be smart enough to not use the gas dryer when using a whole house generator. Now if they are going to do an on demand water heater, they need to upgrade their service size anyway.

Most NG service is higher pressure, IE a regulator at the meter vs the old low-pressure systems still in use in old cities. So a supply from main to house upgrade may not be needed. Gas dryer is not a high-power user, most are low amp/watt motors.

He said that they would not permit a gas water heater due to the line sizing, apparently you have to calculate it like everything is on at the same time.

It possible you might get a credit/discout/rebate from the gas company for switching...

And here I am wishing we had natural gas...

I'm just far out in the county to not have access to any public utilities (well besides electric). So yous all with natural are pretty darn lucky. Although they're putting gas lines out on a rural route across the way, you'd think they would do that on a main road like I'm on. I'd rather have public sewer than gas, but that'll never happen.

Yes, there's the propane option, butt it's ungodly expensive in my area (on track with fuel oil).

But, to answer the OP's question sorta, if you don't plan on staying there for more than 7-10 years don't bother with the expense. With more kids on the way, you're gonna need a bigger house!
A

john_pifer said:
What about the gases produced by the combustion? Are those routed through the dryer vent line too?
Click to expand...

Unless it’s in the garage which at least here always are.
B

john_pifer said:
Our new house (built in 2015) has gas heating, but the water heater and range are electric, unfortunately.

WHY WHY WHY did they do this??? I have to think that the decision by the builder was made either due to cost of appliances, and extra cost with venting the water heater, and/or being afraid that a buyer would be fearful of gas. Probably a combination of these factors.

Having cooked on gas stoves and in gas convection ovens, I much prefer gas. So does the wife. But shes said she doesn’t really care - honestly this is something I’d like to have, and is not being pushed by her, at all, although she would obviously enjoy using a gas range if we got one.

We aren’t at all concerned with safety because we have common sense and we understand cause and effect.

It’s also cheaper, and I like the idea that we would be able to cook, and have hot water in the event of power failure.

The range wouldn’t be too difficult - just have to run a gas pipe up from crawl space.

Water heater, much more involved, due to the venting requirement.

Any of you guys do this? What was the cost? Was it worth it? Do you like the gas appliances better?

Not sure exactly how long we’ll be in the house. I figure 7-10 years, maybe. I do wonder how long it would take me to break even on the costs that would be involved. Probably wouldn’t. IDK.
Click to expand...

Personally I would not move to gas because you have to poke a hole in your building envelope. It's possible that your home was built to a level of air tightness where too many vented appliances would cause it to fail. I'm not familiar with Tenn residential code. I can imagine it's going to be a royal **** to try to run gas lines.

Although we didn't do this, we have all gas appliances and tbh I wish I could go all electric. Our water heater and dryer are located in 2nd floor hallway right outside the master bedroom. Replace the furnace/AC combo with a heat pump and dump the gas range for Induction.

John, something that I don't think anyone has mentioned here (unless I missed it) is to compare your electric and gas rates. If I were you I would see if I could somewhat accurately guestimate annual cost per appliance electric vs gas, and in the gas calcs include the initial cost as well since you would be purchasing the unit itself in that case. Finding a break-even point on each one converting to gas (if there is a break-even point) could help make the decision.

On a more subjective front: I don't think resale would be hurt whatsoever going one way or another because most people honestly don't even consider that stuff when buying a house. I also can't for the life of me figure out why in my case I also have all electric appliances, especially considering my gas rates are considerably cheaper than electric and my gas line to my furnace is a whopping 2 feet from my electric water heater . I have read that both gas ranges and gas dryers have generally more poor reliability than their electric counterparts, FWIW.
You must log in or register to reply here.

A
Do they make dual voltage gas furnaces?
2