WARNING: long and boring introduction. vehicle #1: 1998 Volvo S70 T5 with 118k(2.3L inline 5-cyl 236hp high-pressure turbo) , purchased by the Mrs. back in 2001 with 37k. it received 3-4k dino OCI from an indie volvo mech before I assumed maintenance duties of this car in 2004 when the car had ~85k and started a 4-5k OCI with Supertech synthetic 5W30/10W30 depending on the season. There is some oil seepage from the turbo oil return lines(considered by some to be normal), but not enough to fall on the driveway. I'd say there is maybe a 1/2 qt of oil loss during the 4-5k syn oci. I do see some carbon deposits and varnish underneath the oil filer cap(picture so be taken shortly). I am using ST syn 10w30 during the clean phase with a plane jane purolator filter. i will be following the sludge procedure as listed on the auto-rx website. vehicle #2: 2000 Volvo V70XC with 121k(2.4L inline 5-cyl 190hp low-pressure turbo), purchased by yours truly back in march 2008 with 114k. dealer serviced from day 1 with full records with dino OCI, but there was an unfortunate stretch where it went 7k on dino just before i bought the car as the car was diagnosed with a failing catalytic converter+o2 sensors by the dealer and the previous owner opted not to fix it(which is another story for another day). the problem ended up being lazy o2 sensors which i replaced myself and there hasn't been an emissions-related engine light code since the new o2 sensors(13 months and 7000+ miles and counting). since i've assumed ownership, the car was also converted to ST synthetic at 114k march 08 and at 118k nov 08. this car also has some oil seepage from the return lines that don't make it to the ground. i did have a recurring P0014 code from march 2008 to dec 2008 during which resulted in replacement of a variable valve timing solenoid and the camshaft position sensor before i learned that the engine code could also be caused by sludge buildup on the VVT hub and could also be caused by low oil levels and/or poor oil quality. i've been keeping an eye on the oil level and the car has not had the P0014 code since Jan 2009. i've also installed a boost gauge on the car in the a-pillar and it's reading -16 to -17 hg w/ the car in gear while stopped and -20 to -22 hg in decel on the highway. I am using RTS 5w40 with an OEM Mann/Mahle filter during the clean phase. i will be following the sludge procedure as listed on the auto-rx website. moderate carbon deposits and vanish on underneath the oil filler cap. the gauge reports that i am getting 6 psi of turbo boost which is meets factory specs for the 2.4L LPT turbo. i've saved the XC's cartridge style oil filter from the last oil change back on 04/05/09 the just before the auto-rx was added with RTS. if i get around to it, i hope to have all FIVE oil filters photographed during my auto-rx session (pre-rx/clean#1/rinse#1/clean#2/rinse#2).
B

Sounds like a couple engines that should really benefit from the Auto-Rx teatments. Have you considered using the RTS long-term or at least in the summer? I know it would cost more, but I think is better in several ways than the ST syn. Just an idea.
D

bmwtechguy, thank you for responding. the plan was/is to use RTS or synpower during the rx phase and RTS and GC thereafter. i happened to "find" three 5 quart jugs of ST syn in the shed on the day of the clean phase so that's what i ended up using. i will have to add more RTS to my stash(BITOG's reception of RTS appears to be very positive).
Last edited: Apr 8, 2009
D

db130, Looking forward to viewing the photos I think you will be surprised at how much crud ARX removes.
Last edited: Apr 8, 2009
S

If the oils contain any ester you won't get the best result.
D

the S70's engine underneath the oil filler cap: 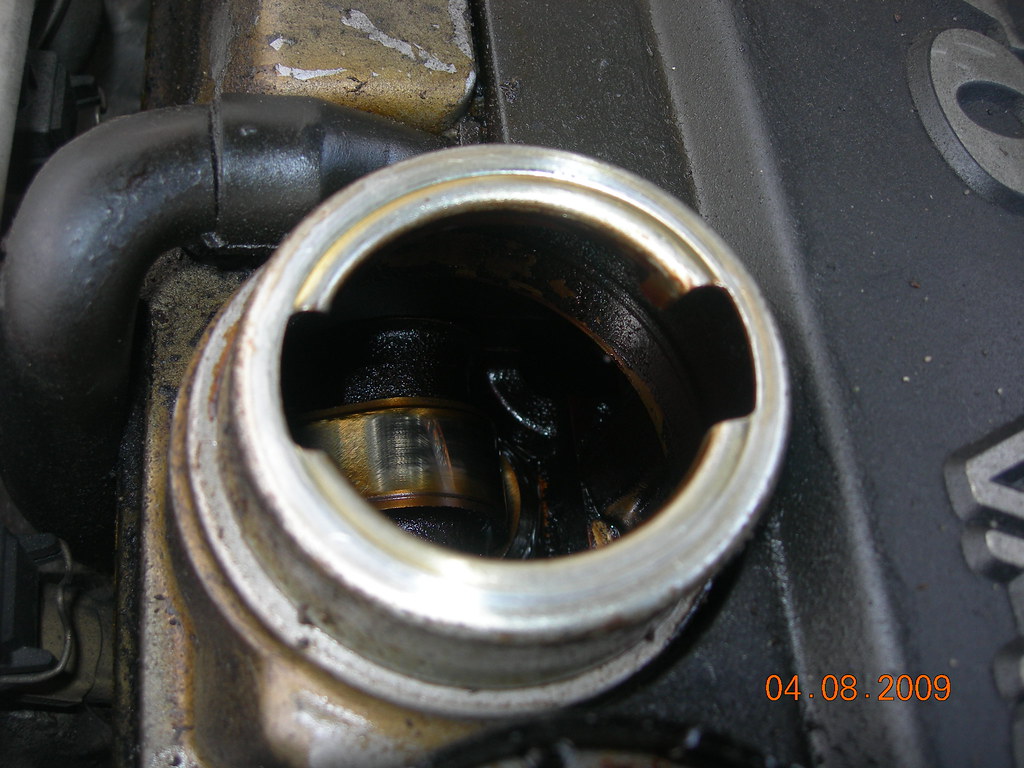 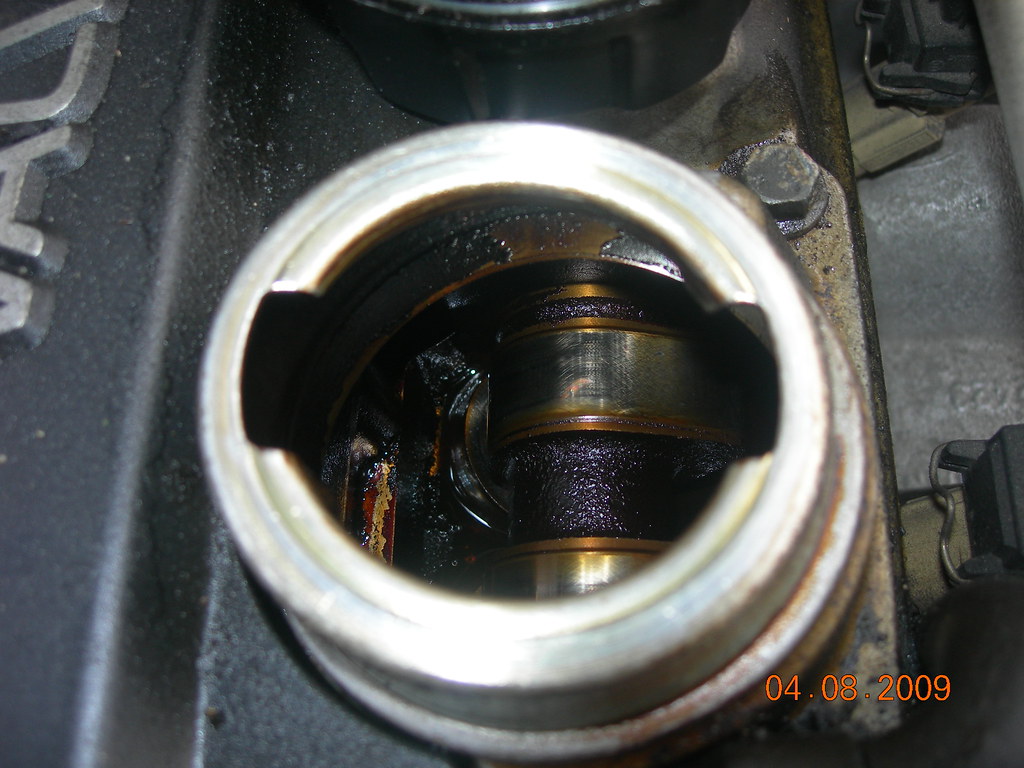 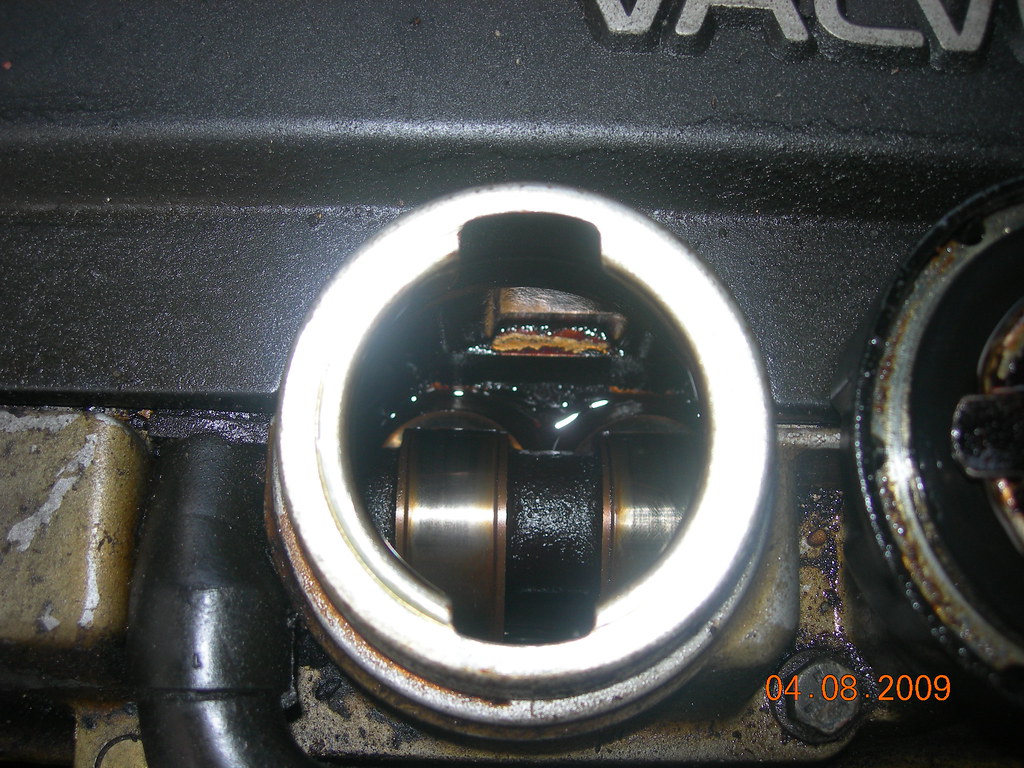 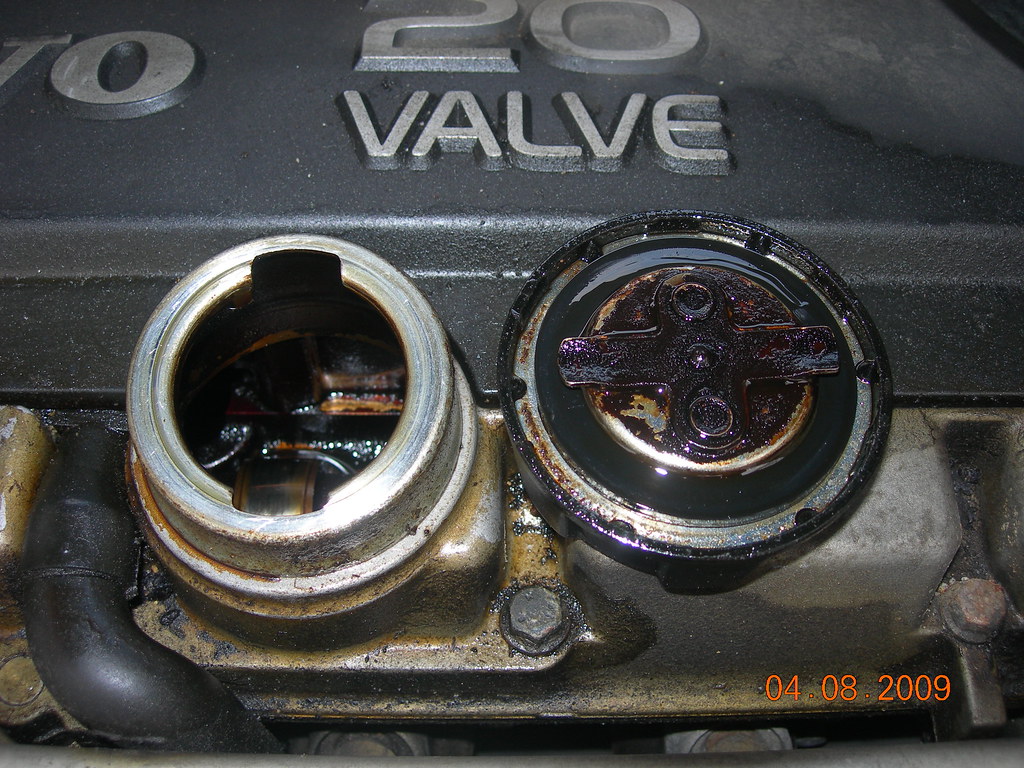 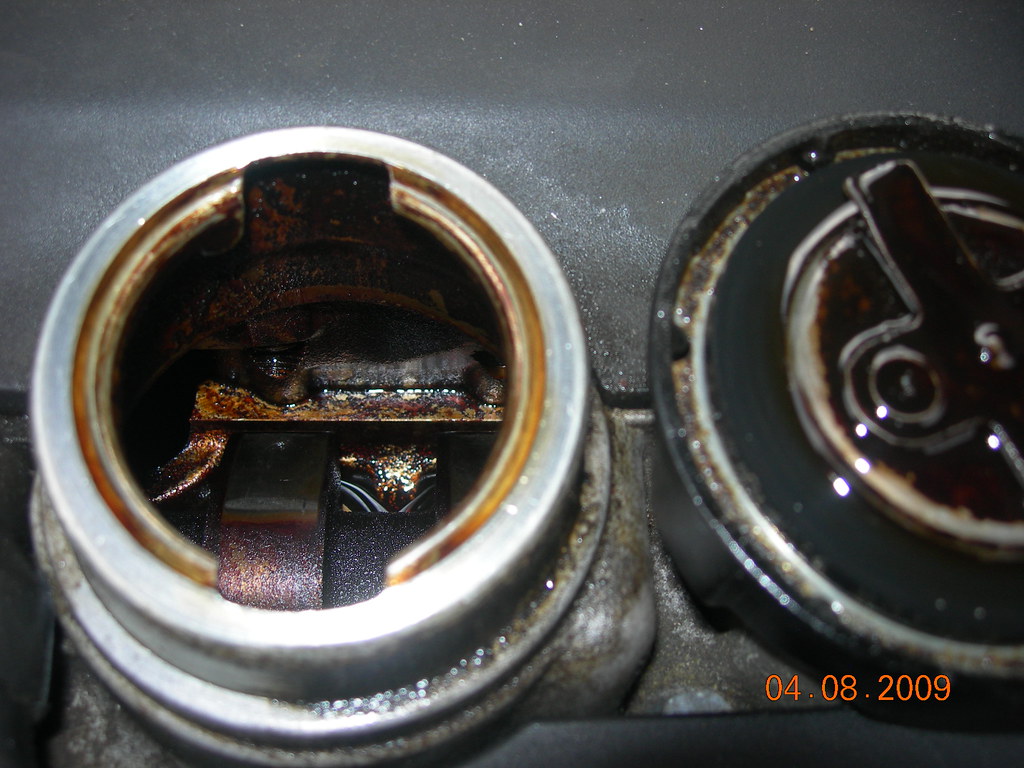 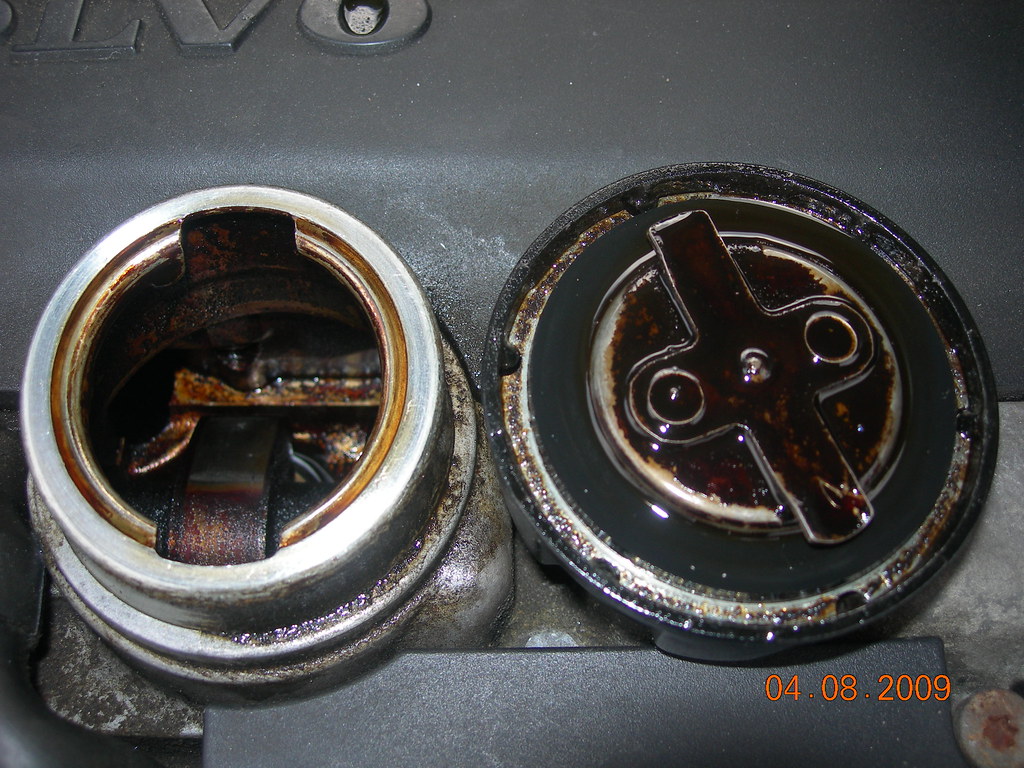 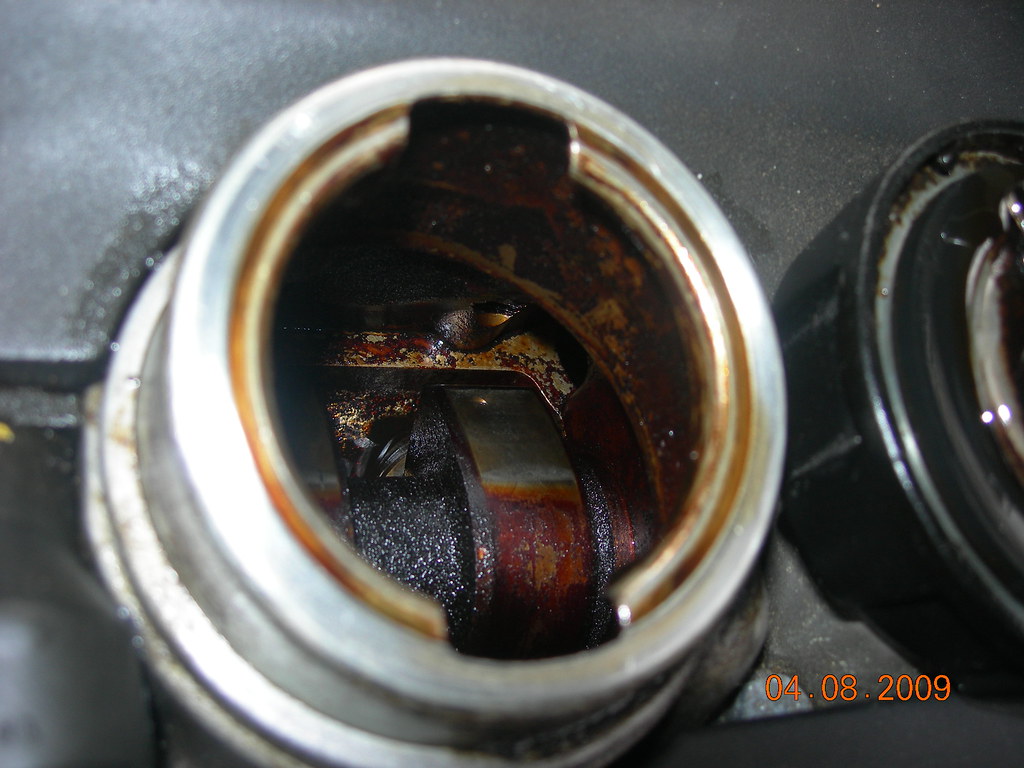 also... i was under the impression that RTS and ST syn are group iii oils and therefore kosher to use with rx?
C

Very interesting varnish formation on the cam lobes. I've never seen that before. Yes, Rotella T Synthetic and Super Tech synthetic are Group III (RTS is actually III+). The Rotella is said to have zero ester content, but I don't know if the ST has any in it.
V

That S70 is not too bad. It should clean up nicely.
S

ester and RX is a bad combo, I know I learn't from experience.
Z

PP may also have esters and PAO in it, especially in the 5W-30 flavor.
T

Any oil with ZDDP has ester in it. Not to mention any esters used for seal swell...
D

finally an update almost 5 months later: vehicle #1 is about 1000 miles into rinse cycle #1 after a 2800 mile clean cycle #1. i did not get to cut the clean cycle filter open but it was extremely heavy. not much visual improvement underneath the oil filler cap, but i'm being told that it is a "splash area" it may or may not ever show improvement. the car ran well before the treatment and continues to run well. vehicle #2 just finished a 2520 mile clean cycle #1. i was hoping to drive this car more this spring and summer but i installed a larger turbo/new heater core/rechipped ecu/radiator and it sat for longer than i would have liked! not much improvement underneath the oil filler cap on this car either. now on with the good stuff: this is one dirty filter, especially after just 2520 miles! 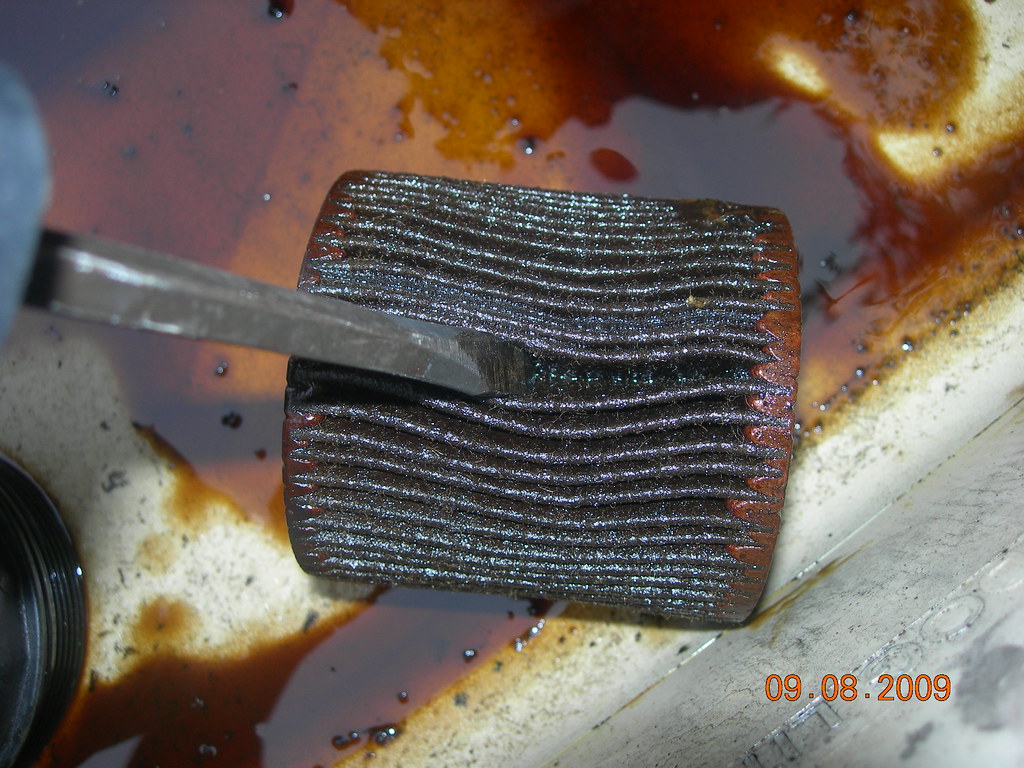 and here's the goop that i found on the bottom of the oil filter housing: 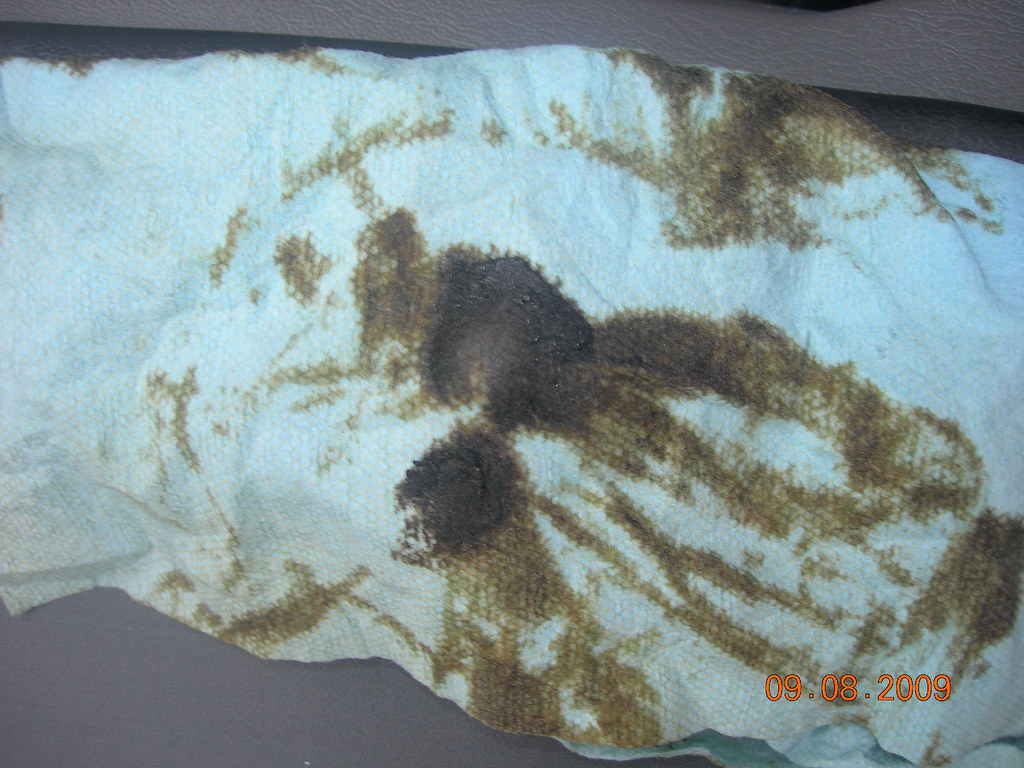 just filled the car back up with 6+qts of RTS. i may change out the filter after 1500 miles.

Originally Posted By: chevrofreak
Very interesting varnish formation on the cam lobes. I've never seen that before. Yes, Rotella T Synthetic and Super Tech synthetic are Group III (RTS is actually III+). The Rotella is said to have zero ester content, but I don't know if the ST has any in it.
Reminds me of the varnish that was in my 240SX after a motor flush, not too long before a rod went through the block. I would just like to see one owners manual that has a motor flush on the maintenance schedule.
A

I did my 97 960 with 70K miles on it that looked about the same as your Volvo's. After two rinses the area under the oil cap looked like a brand new penny. Don't worry it will clean up nice after a few rinses.
Z

Cool. Can you still snap a few shots on inside the valve cover for us to see anyway?
S

What do you expect to see under the valve cover which is only a splash fed area?

C
What do y'all think it could be?