What do you use for drain/fill bolt gaskets?

I guess over the years I've improvised. I've changed oil, transmission fluid, etc in cars built by Honda, Subaru, GM, Toyota, Nissan, etc. I helped my dad out with his 1996 Buick Regal. That one didn't need a gasket since the factory drain bolt came with a rubber gasket built in. I bought a replacement once figuring it was about $4 at a dealer and after a while it could probably use a new gasket. Looked like this except there might have been a magnet sort of wedged in there. 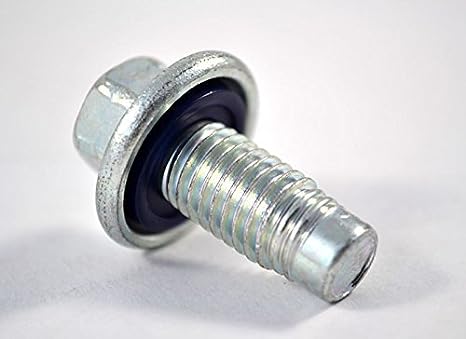 Honda uses the same 14 mm I.D. aluminum crush gasket for oil and transmission. I've been using those with a couple of Integras and my wife's 2002 Civic. I've also used them on Honda automatic and manual transmission, where it's convenient having the same for both plugs. I remember buying them for as little as 20 cents, although more recently it's about 30 cents. The fill hole on my 1995 Integra GS-R was an 18 mm ID. Dealers had aluminum sealing gaskets, but a few times I used fiber gaskets from a parts store that I figured I could reuse since they weren't deformed. Once I had an assortment that included an 18 mm copper gasket and used that. The Subaru plug was interesting. I bought a case of a dozen Tokyo Roki filters from a Subaru dealer selling online, and one Subaru OEM gasket was thrown in with each filter. Otherwise they cost maybe $1.50. They're these 20 mm steel gaskets similar to the sealing ring on a spark plug. One time I bought a box of Dorman equivalents, but they had this weird textured surface and they seemed to leak a little bit. That's also the largest drain hole I've ever seen in a car. More recently I got a bag of 25 copper gaskets at Grainger fairly cheap - I think maybe $5-6. They were sold as automotive drain bolt sealing gaskets, and they've worked pretty well. But this is what a Subaru OEM gasket looks like: 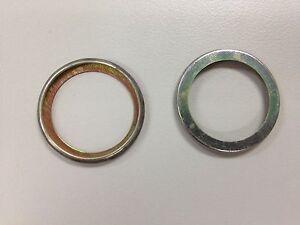 I've helped my folks out with their Camry. That's a 10 mm I.D. gasket. I did the first oil change on that car, and it had the oddest drain gasket I've ever seen. It was aluminum, but covered with pressure sensitive labels on both sides. When I went to a Toyota dealer they said their OEM gasket was fiber for about $1. I've actually asked around, and Honda dealers have a 10 mm I.D. aluminum sealing gasket that's meant for brake lines. But it works. One time I cheated since I had the Honda gaskets and I carefully centered it and made sure it stayed centered when crushed. Not ideal, but it didn't leak. I've also bought some copper ones pretty cheap at a specialty auto parts store. But the Nissan had the oddest looking OEM drain gasket (12 mm) I've ever seen. I bought one (cost almost $2) the first time I offered to help. These things are weird. Also bought another bag of 25 copper gaskets at Grainger (might have been $4) to help with oil changes that Nissan.

When I can, always OEM. In a pinch, I'll use a nylon washer or a Fel-Pro plug gasket.
H

Originally Posted by y_p_w
But the Nissan had the oddest looking OEM drain gasket (12 mm) I've ever seen. I bought one (cost almost $2) the first time I offered to help. These things are weird. Also bought another bag of 25 copper gaskets at Grainger (might have been $4) to help with oil changes that Nissan.

I just bought 3 packs of those, weird gasket for sure. I sat there obsessing over whether or not it mattered which side went where

I actually quite like the Nissan one, having used them pretty heavily. Couple of cars have had the integral rubber, and they scare me...never had an issue. R16 was good, it was a copper "O" ring, with a rubber insert. Have had a few cars with a thick Al washer, which seems to be the best of the best re-usable options. Usually have a handy set of copper washers around, they are great for unanticipated work on friend's cars (have since resolved that problem - got no friends) Fibre washers, I liked a lot, but occasionally would split them
D

I needed a copper crush washer the other day for my Rav4 and raided my Harbor Freight copper washer assortment. Eighty pieces of assorted sizes for around five bucks with the 20% off coupon. You might want to consider that if you have a store in your area. https://www.harborfreight.com/80-piece-copper-washer-assortment-67526.html

My engine oil drain plug gasket is the factory one after 180.000km and about 18 oil changes... Not even one drop of oil leaked ever... Every mechanic who touched it said it is reusable...go figure.

I've had excellent results with many Fords and now a GM product that have a rubber gasket built into the drainplug. They have never leaked a drop and there is no need for a crushwasher. Why wouldn't every mfr use this design?
O

I only use copper or aluminum but have used plastic only once (came with the new drain plug). Also one of my newer cars came with paper looking engine oil drain plug gasket but I don't use it. I was kind of copper only but warmed up to aluminum. One of my cars had copper for rear diff and aluminum for transfer case from factory. Not sure what's going on. Maybe sensitivity to different fluid or just random ... I followed the same pattern.

When I purchased my Gold Plug, it came with a pack of extra washers, (gaskets), or whatever you want to call them. But so far I've been reusing the original. It doesn't leak a drop. I don't think it's necessary to replace them each time. https://goldplug.com

Originally Posted by HighbrowHillbill
Originally Posted by y_p_w
But the Nissan had the oddest looking OEM drain gasket (12 mm) I've ever seen. I bought one (cost almost $2) the first time I offered to help. These things are weird. Also bought another bag of 25 copper gaskets at Grainger (might have been $4) to help with oil changes that Nissan.

I just bought 3 packs of those, weird gasket for sure. I sat there obsessing over whether or not it mattered which side went where

I'm currently using a new AC Delco rubber gasket on my truck and it still leaks. Not sure if the drain plug's threads are blown out or the gasket just sucks. My brother had the same issue with his Blazer too so perhaps it's the design. My truck also has a magnetic drain plug, which one would assume is a poor fitting aftermarket, but once again, my brother's truck had the same thing. I wonder if an aluminum or copper crush washer would help. 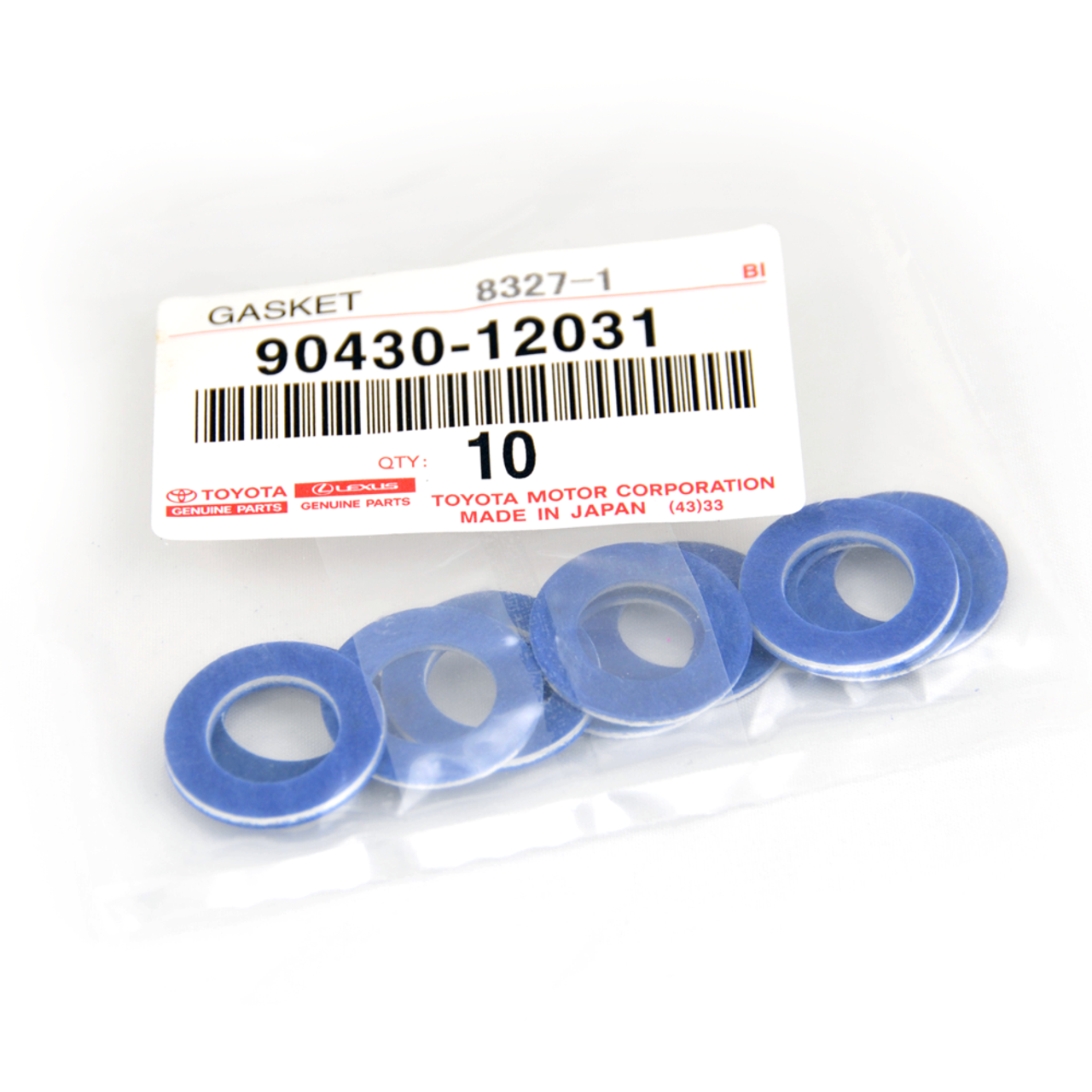 I've always reused the Toyota OEM plug gaskets even though they tell you not to. Got a pack of 5 somewhere just in case the old gasket falls in the used oil container.
O

That's what my car had and I was afraid of using them. I thought they look like paper or cardboard ! So they must be good!!! Maybe I should give them a try. I throw it away and used copper or aluminum. Can't recall.

Originally Posted by OilUzer
I thought they look like paper or cardboard !
No, the inside is metal.
K

It is actually amazing to think of all the designs and materials which have been employed to serve one fairly straightforward task.

On plugs that have rubber insert I use them but prefer aluminum washers instead of copper on aluminum pans, they seal better at lower torque, copper is fine on steel pans but aluminum also works good. I buy them from Amazon, they have all sorts of sizes.
C

Me too. I do stock some for when I do need one. We have a guy that drives around selling stuff. I buy bags of washers from him.

OEM Subaru crush washer every time. Buy the OEM filter and washers as 6 packs on Amazon.
You must log in or register to reply here.