The bird is the word.

Was today anyway. My mother in law has a bird bath outside her window. She likes to watch the birds. She was watching the birds when my cat jumped up and nabbed one.

Thinking she had just witnessed a murder she screamed and came running out of her room.

I ran outside to find the cat with a bird in his mouth. He came prancing to me all proud and ran into the house still carrying the bird.

Once in the house he dropped it as a token of love to us.

The bird flew into a wall, a window then went into our bedroom. It hit another window and fell to the ground. But before it got to the ground my fat orange cat that was sleeping on the bed caught it!

I got the bird away from that cat and now had 2 cats and a bird in the same room.

Got the cats out and managed to get myself out and shut the door behind me.

I went outside and took the screen off and my wife opened the window and the bird flew out.

Seemed ok as far as I could tell. Flew away pretty fast.

And the bird flew home and said "you're not going to believe the day I had".

Cat's got to eat
J

Cats love to chase and catch anything with feathers or similar surfaces.

Hunting, chasing, and pouncing during the catch is in there nature. They enjoy it.

I have about two feet of different width and texture ribbons folded in the center and tied in a knot with a string to pull it, for our cat to chase and catch. It really likes to catch and tackle those ribbons. It is part of the way they think. And it is good exercise for them. They seam to be built for burst of speed.
C

JimPghPA said:
Cats love to chase and catch anything with feathers or similar surfaces.

Hunting, chasing, and pouncing during the catch is in there nature. They enjoy it.
Click to expand...

Yep, there was a study done, by the University of Georgia I believe. Basically boiled down to, cats are bird murderers, by some obscene amount.

Found mention of it: 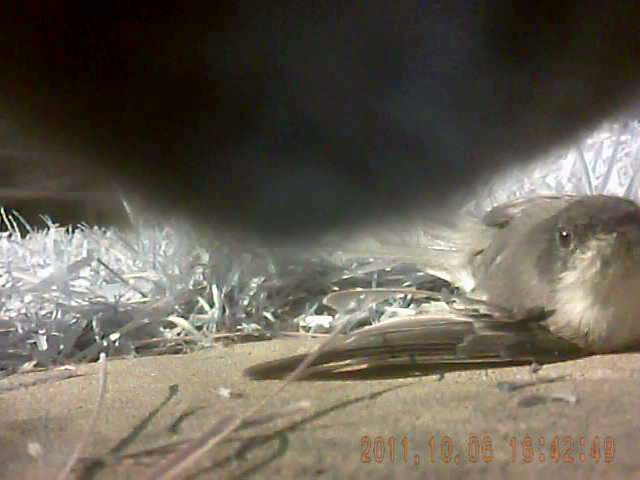 A study released this month by The Wildlife Society and the American Bird Conservancy suggests that nearly one-third of free-roaming house cats are capturing and killing wildlife, reports the Wildlife Management Institute. Conducted by the University of Georgia, in partnership with the National...

"The finding that cats are only bringing back fewer than one-quarter of their kills to their residence counters previous studies that tried to gauge the impacts of domestic cats on wildlife. Those earlier estimates of a billion birds and animals per year were based on mortality counts from animals that the cats brought home with them. The KittyCams showed that nearly half of the time (49 percent) cats would leave the prey at the capture site and 28 percent were eaten and never brought home. The new study does not take into consideration the impacts of the estimated 60 million feral cats that roam the United States. A University of Nebraska study from 2010 states that cats have been responsible for the extinction of 33 bird species worldwide.

"If we extrapolate the results of this study across the country and include feral cats, we find that cats are likely killing more than 4 billion animals per year, including at least 500 million birds. Cat predation is one of the reasons why one in three American bird species are in decline," said Dr. George Fenwick, President of American Bird Conservancy."

Reminds me of the time my wife called me (quite excited!) while I was at work that my indoor-only cat Ziggy caught a bird and was running around the house with it. He was a mostly foul tempered de-clawed rescue we adopted, but he was a cool cat, I miss him.

How the bird ended up in the house to be caught by Ziggy is still a mystery to us to this day. I DO know that he was as happy as a clam as he killed that little sparrow. He must've thought "this is the greatest day ever!!".
Mike B