One of the things I have always wanted to do was drive Route 66 (as much as possible on the old highway) from Chicago to Los Angeles. I have been coast to coast on I-10 and border to border (north and south) as well. I am not getting any younger (in the words of my grandfather, "Daylight's burnin' son") and am thinking that 2015 is the year that I take this super cruise. For grins and giggles, I thought I would post what my ride will be (and why) as well as the obligatory question of "what oil and filter" with you guys/gals that want to list the same following suit. Historically, I have owned more GM cars/trucks than any other brand with Ford in second place, followed by the one Dodge truck, and one each--Mitsubishi, Nissan, and Toyota. For my choice, it is going to be a 2013/2014 Chevrolet Camaro convertible with a 6 speed and a V-6. Why? Although the Corvette would normally be the ticket and I am sure the newest ones will far outhandle/perform the C4's I once owned, there is something about that retro '69 look. The 300 odd ponies coupled with the 6 speed should provide enough of a spirited ride while not sucking down too many petrol fumes along the way. Though the retro '69 Mustang fastback would also be a nice ride, it seems smaller than the Camaro (have not looked, just a gut feel) and I do not like its lines as much as the new F-body. As for oil and filter, any approved would do since the total miles are far below a true '69 OCI, but M1 AFE 0W-xx would be the oil of choice with a Fram Ultra filter (yep overkill on both, but then again, nothing to worry about either). What car and oil/filter combination would you use?

I did this. Bought my 82 300CD from an old lady in LA. Picked the wife up at Orange county airport, and went on our way. Some of old 66 is still there and marked, some is still there but unnamed/marked, and some is just realigned with I-40. So that's my car and the basis of what it is. There are books with nearly mile by mile maps and comentary of how to take it. I think the initial desert in CA is the most memorable, probably because its when we were freshest and just going, and because it is where we first started seeing abandoned stuff and the signs of a bygone era. But there are folks that live out there, just on the ground, on the dirt, we've seen them. Lots of odd characters all along 66. Small towns with old 66 going down the main drag are pretty neat. New Mexico I think was our favorite state. There is a teepee hotel in Holbrook Arizona, and the Blue Swallow Motel in Tucumcari NM are both memorable. Lots of other little motor hotels are along the road, many with the neat original neon signs, which I love. I really enjoy clean, well kept motor hotels, but there also are the bad motor courts where bad things happen.

I think the old lady had filled the 300CD with 20w-50 API SM/CF (!). It consumed none the entire cross country trip. But I quickly changed over to an HDEO and a Mann filter... P.S. next new car we buy I plan to get from WA and take the "northern route".
S

Looks like Amarillo Texas in the second picture. Cadillac Ranch.

If this is fantasy then I would take the eleMMent Palazzo. Oil & Filter, factory fill of course!

Originally Posted By: Apollo14
If this is fantasy then I would take the eleMMent Palazzo. Oil & Filter, factory fill of course!
It can be a fantasy; but I was thinking more in the reality realm.

my wife and i got married on 66. oatman,az! i was not the only donkey in town

Good for you! I have covered much of route 66 in Cali, Az, and New Mexico and I loved seeing the old places it passes through.
A

Oh in that case I'll change the factory fill to Royal Purple oil and filter.
A

Here's another fantasy: A reliable Jaguar with Pennzoil Ultra Platinum. Neither actually exists!
A

In honor of the retro status of Route 66, I think you should seek out old gas stations and find oil in pasteboard cans and the piercing-type spouts that were used to pour it into the engine. I used to carry one around in my old Vega in a plastic bag. Somehow the oil managed to stain my carpet nonetheless.

Buy em Squaw Bull Horns. I'm glad I didn't. Those bull horns would have wound up up my *%@. "The afternoon knows what the morning never suspected."Get your kicks(bull horns) on Route 66.
L

Originally Posted By: JHZR2
I think the old lady had filled the 300CD with 20w-50 API SM/CF (!).
Oh, she put gasser oil in the diesel? I didn't see an issue with the viscosity but maybe it was the wrong type of oil.
B

Darn, that looks like my first MB, the 280CE coupe with the Euro gas engine. A grand car.

The wife and I did the CA to AZ part on our way to Laughlin this year. 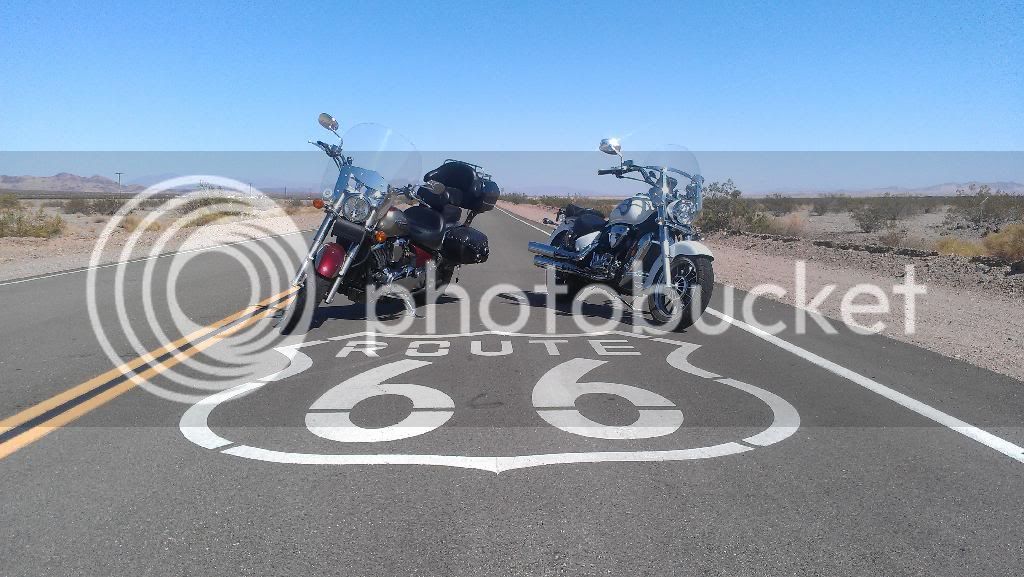 That's the one big road trip I'd like to take. Heck, I'd settle for Tulsa to CA on old 66 wherever possible/practical. I would probably just drive the Crown Vic. But if we're picking out whatever sounds good. maybe a Mustang from just a few years ago, say somewhere from 07 thru '12-13. The 300 HP V6 & a manual trans should provide 30 mpg or so, & be spirited enough for me. Gotta confess that nice old Mercedes pictured above looks great & I bet it's a great car for a long road trip.

P
Credit card came late after mail theft incident. What would you do?

Nov 19, 2021
RAR
S
Which method would you choose to plumb this compressor filter?