We are at summer capacity! 17 of 18 units are operating, producing ~12,150MW, or, at this moment, 56% of Ontario's electricity, as demand is presently >21,000MW. Bruce Unit 6, as shown in the chart, is offline. It was the next unit to go down for refurbishment after Darlington Unit 2 came back online. DNGS Unit 2 isn't quite up to full output yet, the generator, turbine and all associated components are now brand new, so there is a run-in period and some tweaking that needs to take place before 100% electrical output can take place (unit is already at 100% thermal). The other morning, nuclear was providing 88% of Ontario's electricity, but gas needs to step-in during the day when demand starts to peak. Wind is AWOL, as it always is for the summer, producing wholly out of phase with demand. 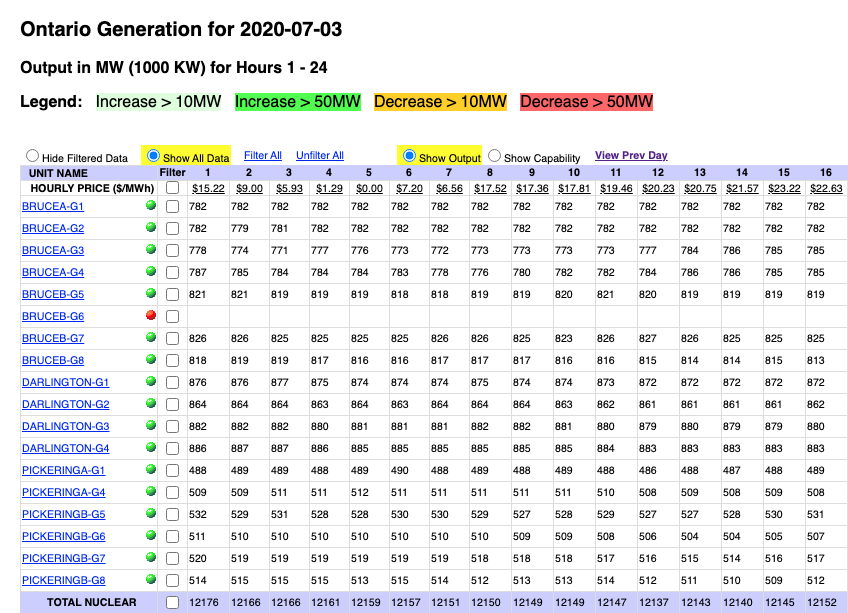 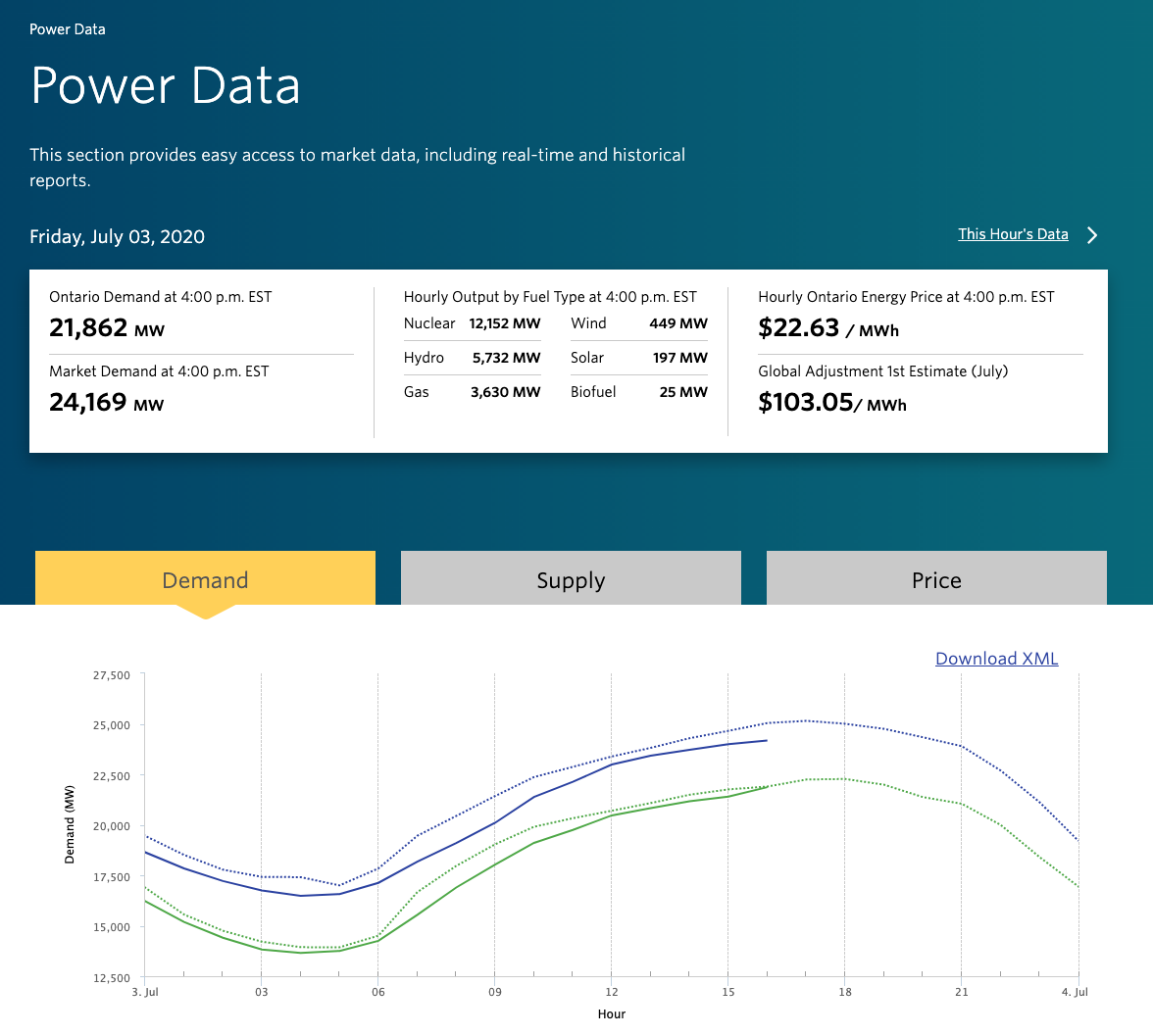 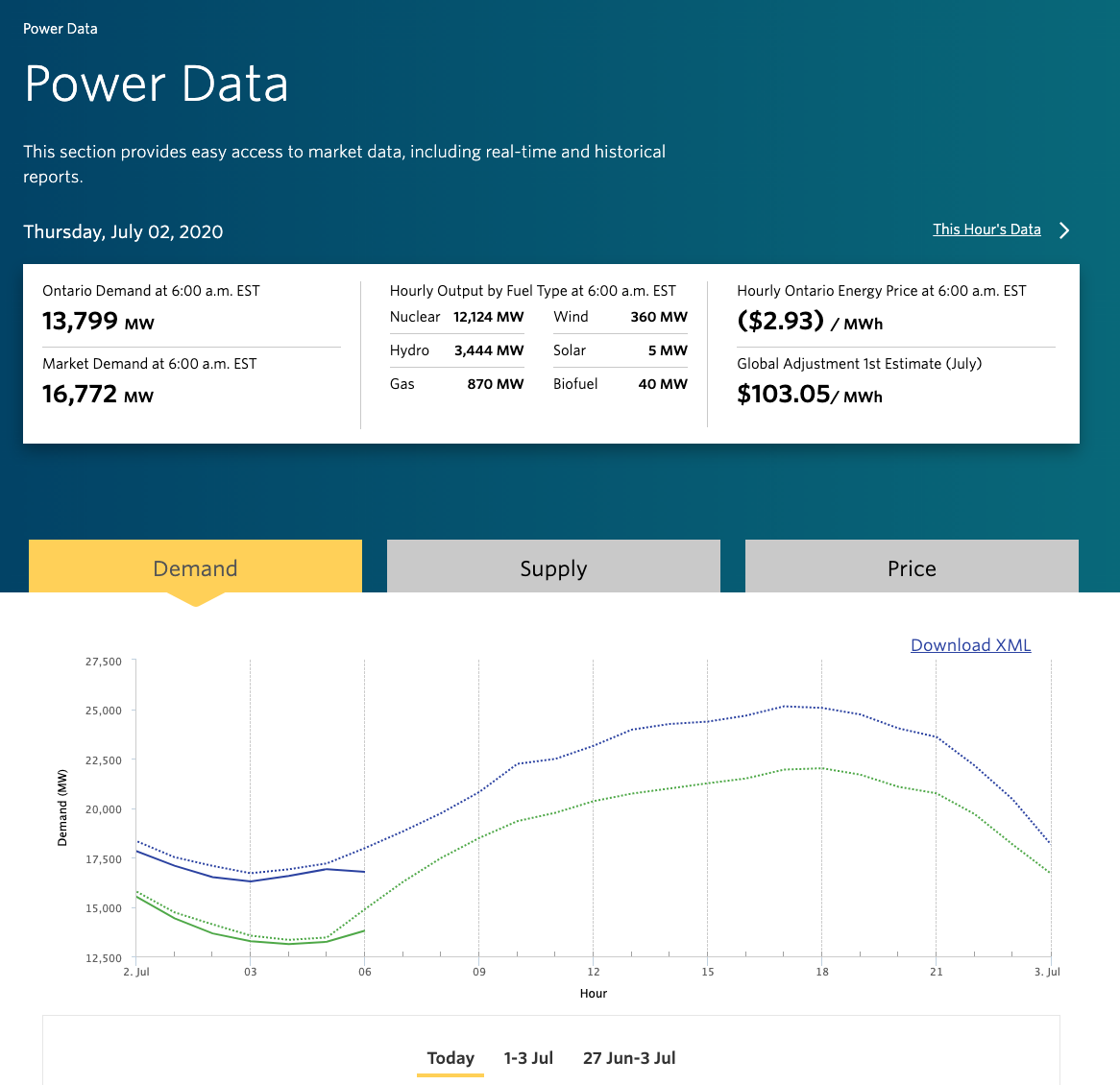 Thanks for posting - your updates are always interesting
9

If you have the right kind of nuclear plant it's a viable GREEN alternative. Too bad so many of the early installations were so screwed up.

Originally Posted by wwillson
Thanks for posting - your updates are always interesting
Thanks Wayne! I'm really hoping to see some above nameplate performance from DNGS 2 when it is run-in. It has a new generator, which means it should theoretically produce more power than the original one. If you look at Pickering, I'm not allowed to speak to specifics, but Unit 5 is an obvious stand-out, producing 20MW more than nameplate, so I expect a similar level of improvement at Darlington. Then there is Bruce 7.... Another obvious stand-out in the Bruce B units, all of which were rated originally for 817MW nominal. It is still using the original generator too... Plans are for Bruce to produce 7,000MWe post refurb, so we'll see how that ends up looking. Speaking of thermal capacity, this is where things get a bit interesting and where the whole genesis of the CANDU 9 gets a bit funky. So Pickering is obviously not even CANDU 6, it's the first post-commercial construct and the result of Douglas Point, which was the first commercial unit, now shuttered, which sits decom'd at the Bruce site. It has fewer fuel channels and fewer bundles per channel than Darlington or Bruce, but of course Bruce is a fair bit older than Darlington. Bruce is basically the experimental site for what ended up being the CANDU 9/CANDU 900 (900MWe). And as such, there are some strange, STRANGE things at Bruce, particularly the A site, in which Unit 4 is/was markedly different from A units 1-3 and all units had massively higher thermal capacity than electrical because they were designed to run external steam services like the heavy water plant. All Bruce B units are rated, really, for 860MWe but nominal is 817MWe. I do not know why. B also has some funky thermal stuff going on, which I'll get into below. The power output of a thermal plant is directly related to its thermal capacity. Thermal plants (steam) aren't overly efficient, as I'm sure Shannow could expound on far more than I, but generally, you are looking at around 30% efficiency from thermal to MWe output (NET). Nuclear plants run at lower thermal temperatures than other thermal plants, like say coal, which makes them a little less efficient still in this regard, but of course they are also non-consuming, so there isn't a fuel consumption penalty for that. I drafted a spreadsheet a while back that contrasted the various thermal to electrical relationships of the plants in Ontario because I was curious as to how viable the idea of increasing the output of Bruce to 7,000MWe was. The plant, currently the highest output nuclear power plant in the world, produces 6,430MWe at present, so 7,000MWe is a rather massive uprate. The thermal output of the units at Pickering is 1,744MWth The electrical output of the units at Pickering is 515MWe (A)/516MWe (B) The thermal output of the units at Darlington is 2,776MWth The electrical output of the units at Darlington is 878MWe The thermal output of the units at Bruce are: A: Units 1&2: 2,620MWth A: Units 3&4: 2,550MWth B: Units 5&7: 2,832MWth B: Units 6&8: 2,690MWth The electrical output of the units at Bruce are: A Units: 779MWe B Units: 817MWe (obviously B7 is around 825MWe now) We'll focus on B units 5 and 7 which immediately stand out as having higher thermal output than the units at Darlington. These units should, in theory, be able to push 900MWe unless there are other constraints in play. Here's a shot of my spreadsheet, which determines the ratio from MWth to MWe and creates a potential scenario for Bruce: 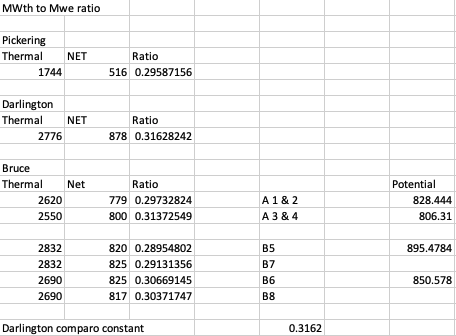 this yields a NET output of 6,758MWe if Darlington efficiency level is reached at Bruce. you'll note that 5 and 7 are scratching 900MWe. I'm quite intrigued to see how this actually pans out in practice. They've made some significantly increases in output with all the original hardware on a few of the units, so the potential may actually be there. As I touched-on earlier, Bruce was the "testing" site for what would eventually be the CANDU 9, which is what was built at Darlington. Originally slated to be 8 units, Chernobyl derailed the construction, produced massive cost overruns and resulted in the B site not breaking ground. It would have mirrored Bruce in having two separate CANDU 4-packs, different from Pickering where the 4-packs were connected in the middle. The CANDU 9/900 was supposed to be a larger for-export model (the 4-pack setup was exclusive to Ontario and never exported, nor attempted to be) but none were ever sold. The only successful for-export version of the CANDU has been the CANDU-6, which exists in many locations around the world and has an installed capacity of around 700-725MWe, depending on configuration.

I cant remember where I heard it on talk radio this week, but they spoke of a safer type of nuclear energy that should be put to more use. I think it was on Coast to Coast AM.

Originally Posted by skyactiv
I cant remember where I heard it on talk radio this week, but they spoke of a safer type of nuclear energy that should be put to more use. I think it was on Coast to Coast AM.
NuScale Power is the company you're talking about. I believe they achieve license already, or will very soon. https://www.nuscalepower.com/ Is George Noory still on C2CAM? I used to listen to him 20 years ago. Some topics way to far out for me, but some very interesting.

Originally Posted by skyactiv
I cant remember where I heard it on talk radio this week, but they spoke of a safer type of nuclear energy that should be put to more use. I think it was on Coast to Coast AM.
That would be pretty much any 4th gen design which are all supposed to be "walkaway safe". The current thrust is for Small Modular Reactors, like the NuScale units that Wayne mentioned. Ontario is VERY close to having our first demo SMR break ground at Chalk River, it's a product from Global First Power/Ultra Safe Nuclear and funded by Ontario utility OPG. It's designed to provide electricity and district heating to remote communities and is classified/marketed as an "MMR" or Micro Modular Reactor due to its size. Companies currently working their way through our Federal SMR Roadmap: http://nuclearsafety.gc.ca/eng/reactors/power-plants/pre-licensing-vendor-design-review/index.cfm - Terrestrial Energy - USNC (as mentioned above) - Moltex Energy (slated to be built at Point Lepreau, I've covered this in another thread as it is special in that it runs on used CANDU fuel) - NuScale - GE-Hitachi - X Energy There are a few others that are only in Stage 1 that I didn't include in the above list. The more "snazzy" site can be found here: https://smrroadmap.ca Some of the advantages of SMR's are: - significantly more flexible fuelling options like the ability to use existing used fuel stores as fuel. - far shorter lived final waste products with more relaxed storage requirements - integrated storage for peaking and load following - quick ramp rates to eliminate the requirement for gas peaking - high temp designs could be drop-in replacements in existing coal thermal plants Other uses include desalination as well as hydrogen and synfuel production.
You must log in or register to reply here.

Was in a Parade today!