Many will recall my previous thread on the announcement of Moltex Energy signing an MOU with New Brunswick's NB Power to build their Waste Burner reactor at the Point Lepreau Nuclear site. For those that missed it, the original thread where this was mentioned can be found here: https://www.bobistheoilguy.com/foru...ew-nuclear-reactor-in-canada-since-1980s Cliff notes version: NB Power operates a single CANDU 6 unit that has already completed its mid-life refurbishment and they were/are looking at partnering with 4th gen reactor companies to potentially build at the site. They have signed two MOU's but the one that's the topic of this thread and mentioned in the previous is with Moltex Energy, which is a UK-based company that has developed a reactor that specifically runs on the used fuel from a Canadian CANDU reactor and they have called it the "Waste Burner". The site includes a processing facility that strips the cladding off the CANDU fuel bundles, harvests the fissile material, and prepares this as a salt for use in their Gen 4 unit. Once run through this new reactor, the remaining material has a required storage life of about 200 years before being considered benign. We have a much larger 4th gen program taking place at the Federal level in Canada, with a great deal of interest in Ontario, but NB Power's solo approach may result in an operational unit before the Federal program does. So, there's been some recent news regarding Moltex and the other vendor. They've both opened up offices in Saint John and are plugging for a Development Hub: https://www.cbc.ca/news/canada/new-...ergy-climate-change-spent-fuel-1.5063225 The province isn't quite sure how funding will pan-out, but it'll likely end up being a public/private partnership IMHO. So, while this has been going on, Moltex has hired a Chinese SMR expert:
Originally Posted by Moltex
Moltex Energy is delighted to announce that Professor Kun Chen has joined the company as Head of Licensing & Regulatory Affairs for Canada. Dr. Chen will be working in Moltex's New Brunswick office, supporting the company's work with New Brunswick Power to license and build the first Stable Salt Reactor. Dr. Chen is a member of the Chinese Academy of Sciences and has worked on the Chinese Molten Salt Reactor programme since 2011. Their 2MW test reactor is due to commence construction this year. Dr. Chen worked as a Professor and Director in the department of Nuclear Safety and Engineering in the Shanghai Institute of Applied Physics. He was educated at the prestigious University of Science and Technology of China, in Hefei, and earned a PhD from Indiana University before working for several years at Argonne National Laboratory which is part of the U.S. Department of Energy. "I have dedicated my professional life to making molten salt reactors a reality," says Kun, "as this is the only affordable and practical way that we have of both meeting global energy demands and tackling climate change. I joined the Chinese programme in 2011 because it seemed the most advanced in the world at that time. I have joined Moltex Energy now because this is the company that has the best possible chance of turning the potential into reality. Moltex has brilliantly solved the engineering challenges which mean that we will really be building reactors very soon."
And have now signed yet another MOU, this time with Estonia:
Originally Posted by Moltex
Fermi Energia of Estonia have selected Moltex Energy as their preferred technology as they look to establish carbon-free energy production in the Baltic region. The two companies have signed a Memorandum of Understanding which expresses their intention to work together, including a feasibility study for the siting of a Moltex advanced reactor and the development of a suitable licensing regime. Estonia generates the majority of its power from oil shale, but the this fossil fuel capacity will have been mostly retired by 2030. Wind power in the Baltic provides some potential, but the country needs an alternative, reliable power source if it is to remain self-sufficient in energy. Estonia's neighbours Latvia, Lithuania and Finland are all net importers of electricity and so clean and safe power generation in Estonia would represent an improvement in energy security for the whole region. Kalev Kallemets, CEO of Fermi Energia, said, "Our ambition is to deploy the first Fourth Generation Small Modular Reactor in the EU, here in Estonia, by the early 2030s. We are delighted to be working closely with Moltex Energy on this vital project. It is important for Estonia to have its own source of clean, cheap energy and Moltex's innovative technology has huge potential for us." Simon Newton, Business Development Director at Moltex, said, "Estonia is a vibrant, entrepreneurial and forward-looking economy and is the perfect place to benefit from the Moltex Stable Salt Reactor technology. We look forward to working closely with Fermi Energia, who share our vision of a carbon-free and low-cost grid."
So it seems they are gaining some significant momentum, which is exciting, because it makes not only the likelihood of their unit's construction higher, but will result in that construction occurring sooner. This is important. In Ontario, we have the imminent shutdown of Pickering in 2024 unless the current administration changes the decision of the former on the refurbishment of the 4-unit B-side. OPG also holds an active site licence for the construction of Darlington B, so there are two sites (Pickering A, Darlington B) that, if the progress is rapid enough, would work well with units purpose-built to run on their used fuel, which is currently stored in concrete casks on-site at these facilities. If we look at the sprawling Bruce Power site, I've circled the Douglas Point 200MW unit, which was the first operational CANDU for generating power and after 24 years was shut down in 1984. All the fuel used during that plant's life is stored in small concrete silos directly behind it, which I've circled in the 2nd picture: 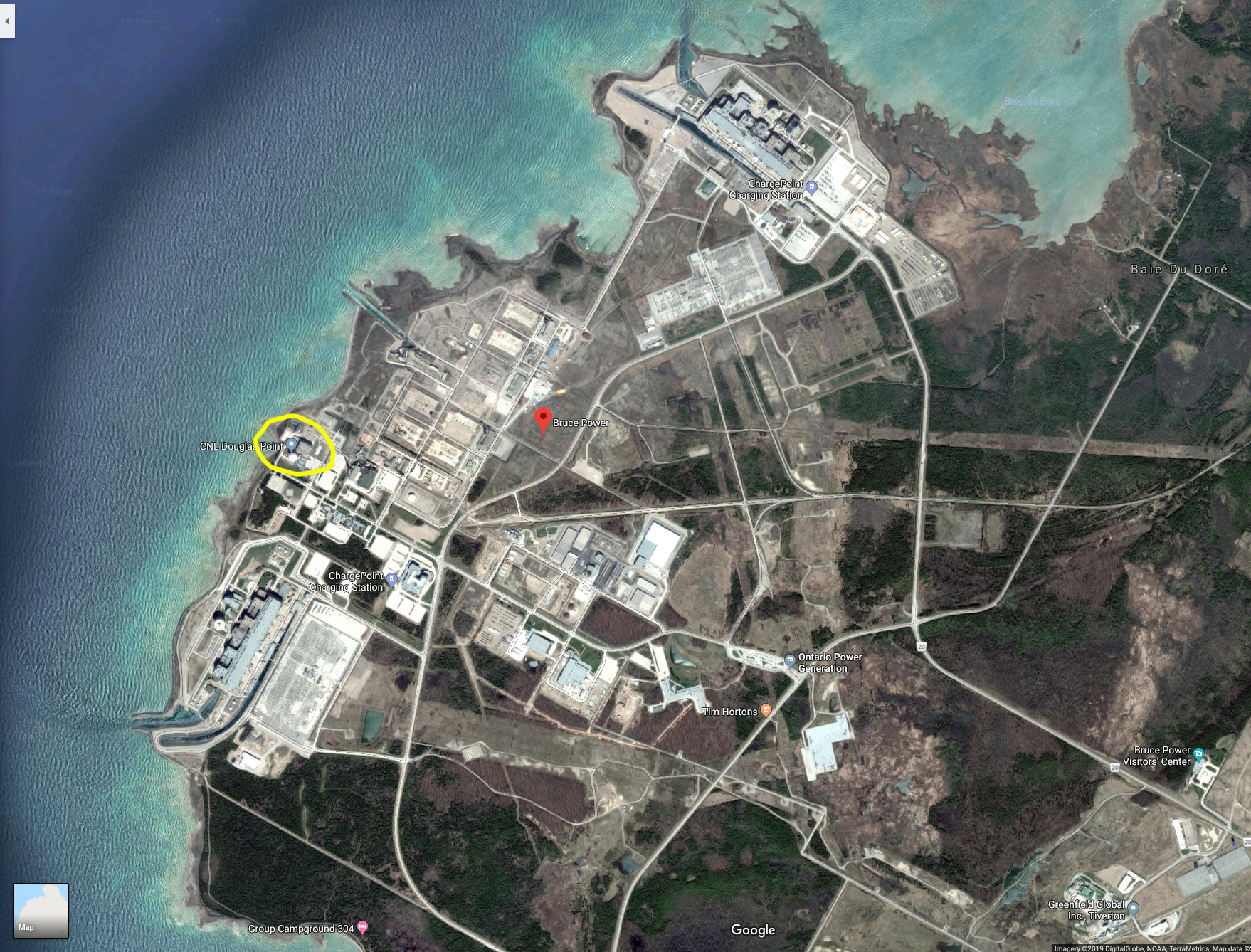 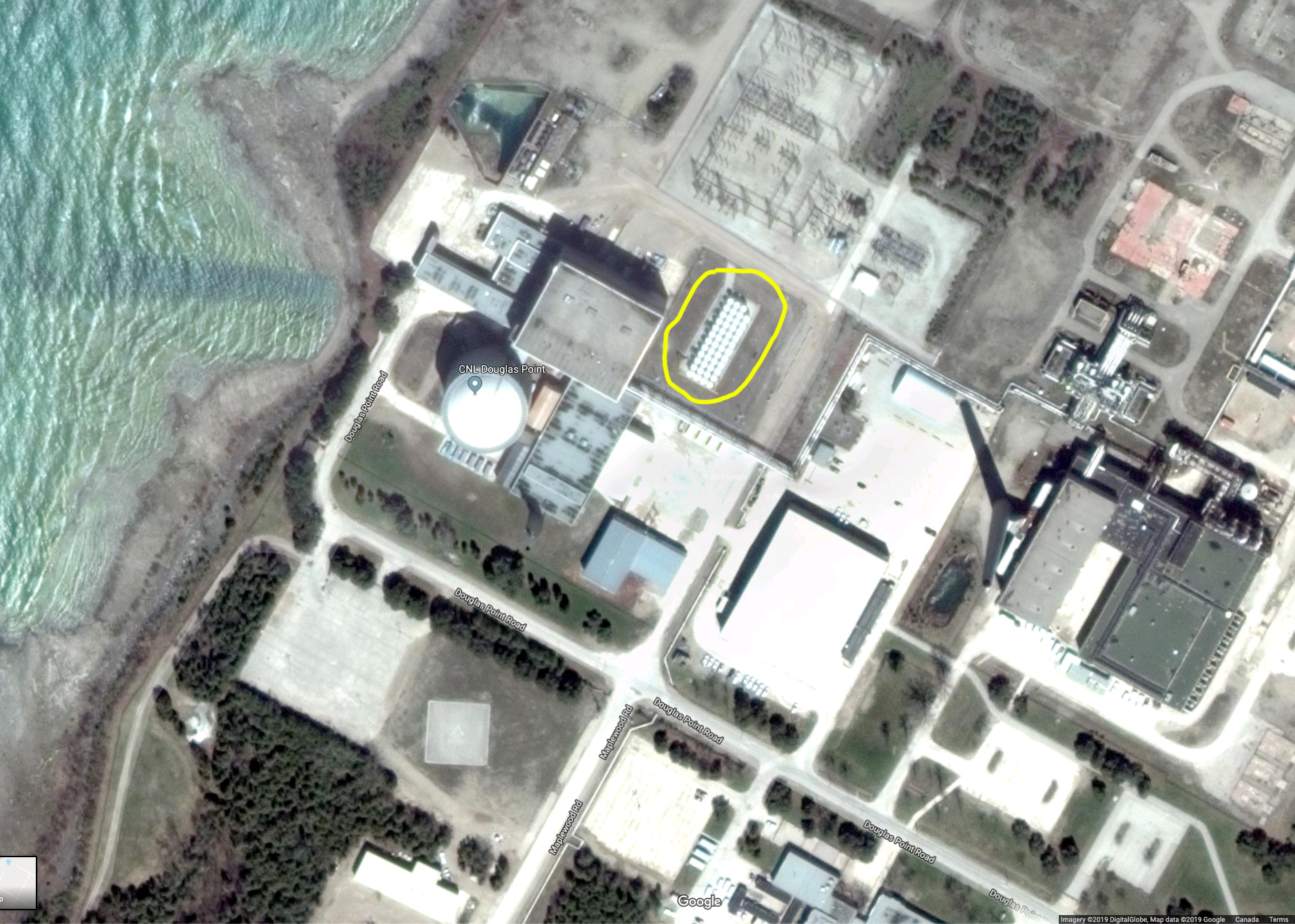 Bruce is another site that would benefit from a potential SMR partnership, given the dearth of existing fuel stores on-site that could be leveraged as is intended at Point Lepreau. It will be interesting to see if talks between them and Moltex start happening.