I just bought a 2019 Kia Sorento 3.3 V6 AWD about a month ago. Almost have a thousand miles on it. It came with the Kumho Crugen Premium tires in 235/55/19. Here in southern Pa. we got a good 3 to 4 inches of snow yesterday, so I took the car out last night just to see how the Sorento did with the AWD and these tires. I stayed in the neighborhood where there was almost no traffic. So I was not out jeopardizing other divers. Anyway, I kept off of any tracks so that I was going through virgin snow, so to speak. I went to the two hills in our development for testing. I got onto the hills and came to a complete stop and then started up the hills with no issues. Went around some corners also. The car and tires did well in this little test. That was surprising to me based on Tire Racks reviews by owners and Tire rack themselves. This tire did not do so well in snow and ice according to the reviews. I thought it did well. Now I realize that this was one outing in the snow and it was only 3 to 4 inches. I'm sure I'll have more experiences as I own the vehicle longer. Last year I had an Equinox 3.6 AWD with General RT43s and it did very well on the same roads with about 6 inches of snow. I was very impressed with them and was planning to get some RT43s for the Sorento if the Kumhos were as bad in snow as I was expecting, based on reviews. But for now I'll stick with the Kumhos (since they're brand new) and their snow performance was better than I expected. So for any of you folks with these Kumho Crugen tires, what has been your experience with them in the snow? Were they decent, or not so good, as Tire Rack had me thinking? If more experience with these tires in snow changes my mind for the worse, I'll report back with that also. Meanwhile, what are your experiences?
J

Location
On another site

Don't downplay the fact that you probably know what you're doing in snowâ€¦ Therefore most tires will do well for you. Can't comment on the tires, I'm generally a Michelin guy.

Had a 2016 Sorento before I passed it on to my son. It does very well in the snow, and the AWD system is very good. A guy in Quebec does diagonal AWD test and the Sorento does well. https://www.youtube.com/watch?v=CwFfn2N4s9s If you want your Sorento to be really good in the snow, get dedicated snow tires. Recommend steel wheels and 60 series tires for the winter tire package. Easy for seasonal switches and protects the alloy wheels from the winter salt.
W

Originally Posted by JLTD
Don't downplay the fact that you probably know what you're doing in snowâ€¦ Therefore most tires will do well for you. Can't comment on the tires, I'm generally a Michelin guy.
You're right. I've been driving for over 50 years, so I've been in a few snows before. I'm always very conservative in the snow (and pretty much even when it's dry out). So that does help.
Last edited: Jan 8, 2020
W

Originally Posted by Danno
If you want your Sorento to be really good in the snow, get dedicated snow tires. Recommend steel wheels and 60 series tires for the winter tire package. Easy for seasonal switches and protects the alloy wheels from the winter salt.
Thanks for the tip, but I'm retired and don't really need to go out in bad conditions, but sometimes you get caught with something unexpected. Those new tires that are coming out with the Three Peak symbol but are not full winter tires look interesting. Like the Vredstein Quatrac 5 or the newer Pro. They can be driven year round but they're better in snow and ice than all season tires.
H

I put a set on my 01 Jeep for this winter. I just picked up the Jeep as a winter beater. The tires were pretty cheap, less than $400 for the set. I previously had Michelin LTX on another Jeep, and most reviews said these Crugens are basically copies of the LTX (just look at them). I got some of the same snow last night in PA, and they seemed to do pretty well on the Jeep. I'll have to test when we get some deeper stuff but so far so good.

I had those very same tires on my 2016 Sorento. They did amazingly well on snow blanketed roads. And I only have front wheel drive. Got caught in a near whiteout with about 4" of snow and they went up and down hills never once losing traction. Went like a billy goat. I say keep them and don't spend money for another tire.
Last edited: Jan 8, 2020
K

I have had the same experience with the same OEM tires on my 2018 Hyundai Santa Fe Sport AWD. Reinforced with morning with a new snowfall.
A

They had other tires to compare to and also the snow conditions may have been different for the given test. Snow is incredibly variable in consistency and tires even winter tires vastly differ on there capabilities to the specific snow condition. Eg Inuits have 50 words for snow because it differs.
S

Here's another write up on them. Since they're new tires the traction maybe adequate. But a year from now with a little wear don't be surprised if they're performance really slides. Esp with about 25k miles on them. I remember someone with some Nexen N5000's selling them with 25k miles because they couldn't get up a small hill by their home. https://tirereviewsandmore.com/kumho-crugen-premium-kl33-reviews/
B

reviews are NOT totally honest at times! if you are pleased with them thats good. retired also + staying home when its bad is smart as another poorly equipped driver or on the cell can be an issue beyond YOUR control!!
P

Kumho when they 1st came out were soso, but like all oriental manufacturers they learn and fast so that every year they came out with a better unit. They are still not 1st tier, but good value for $

Greetings from your neighboring county to the east, we also got 3 inches last night. My Hankooks are about shot on my Mazda 3 and I'm also leaning heavily towards the RT43's. There's a bit of a price premium since they are so popular. Not sure I want to spend $500 out the door on tires for such a basic sedan. Really struggling to make a decision on my next set of all seasons. Those Kumho's aren't rated very well for winter... 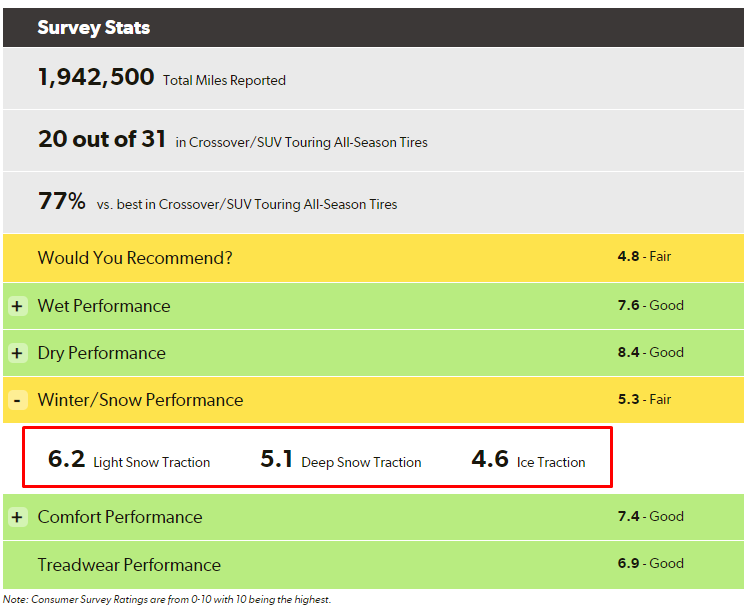 Here is the General RT43's for reference 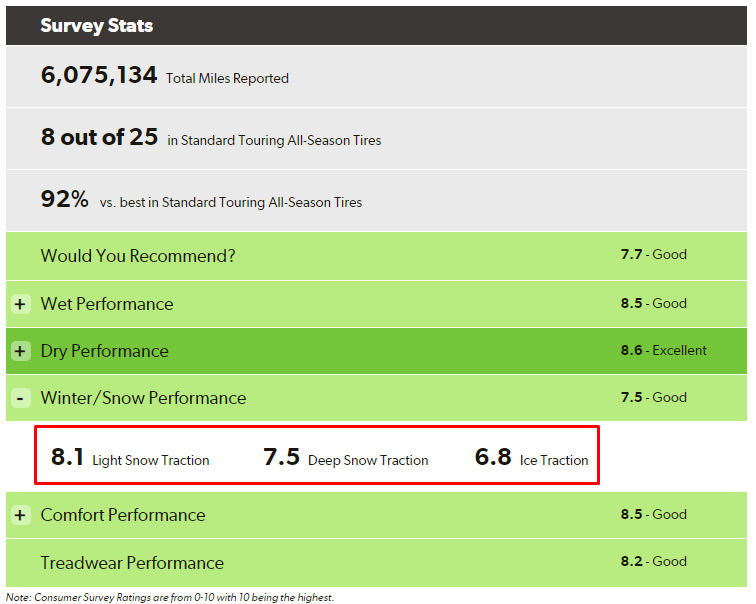 You should have tried it in tracked up snow, where you would prolly drive most of the time anyhow.
H

I just realized that I actually have a different version of the Crugen tire, the HT51. Which seems better rated overall. oops https://www.tirerack.com/tires/tires.jsp?tireMake=Kumho&tireModel=Crugen+HT51
G

Originally Posted by Propflux01
You should have tried it in tracked up snow, where you would prolly drive most of the time anyhow.
I agree. It's a lot easier to drive in fresh untracked snow as traction is a lot better. Packed snow that's "greasy" (a little water layer on top from the sun) or a frozen layer in the evening separates the good tires from bad ones in a hurry.
You must log in or register to reply here.