I was a staunch Firefox user until version 3+ was released. Even the latest Firefox release, version 3.5, consumes an ever increasing amount of memory due to memory leakage. Some folks on the Mozilla forum report seeing Firefox using 1+ GB of memory in Task Manager after just a few hours of normal use. The issue seems to be related to add-ons, as my system returned to normal after I disabled all add-ons and rebooted. I still feel that Firefox has become a memory hog, which is counter to the fast, bare-bones mindset that the developers had when the early versions of the browser were released. And let's face it, without the add-ons, there is little reason to use Firefox. As a result, I uninstalled Firefox and have started to use Safari 4 in conjunction with Ad Muncher. Ad Muncher costs about $23, is more effective than Adblock Plus and is basically a "set it and forget it" utility. Safari is very fast once Ad Muncher removes all of the advertisements.
C

No leaks here. I've NEVER seen Firefox go over 500MB, even with about 150 tabs open. After tabs are closed, the amount of memory used decreases. Maybe Windows 2000 is just better at handling it?
S

Here is an article regarding reduction of memory usage for Firefox. Link To Article There is quite a few other articles too that a you can find using your favorite search engine + you can limit memory usage by tweaking the Firefox Config file.

I went to firefox over safari on my 2005ish mac mini (PPC) because safari had memory holes. Firefox had some, but not as much. On my PCs and on my OSX 10.5.7, no holes.
L

I was seeing 300+ MB of memory being used by Firefox 3.5 while the program only had 1-2 open tabs. This memory was still listed as being used, even after I had closed Firefox. Firefox memory allocation decreased to about 150 MB after I uninstalled all of my add-ons, with the exception of AdBlocker Plus. Safari on the other hand uses approximately 50 MB and I do not see residual memory allocation after closing the program. Safari 4 with Ad Muncher is noticeably faster on my system than Firefox 3.5 with AdBlock Plus.
G

I've had memory leaks since three all the way up to 3.0.11 It depends on computer and configuration. I never use any add-ons. Just regular as-packaged FF. Seems to me it happens when tabs have been opened that have both java and flash at the same time. Even after the tabs are closed the leak will continue until the instance is killed and the browser re-opened. I can re-open the same sites that were open when the leak started and have no problem. Seemingly random occurrence. Funny, I was thinking about starting this thread myself. Updating to 3.5 on all machines now... We'll see if the issue persists.
B

I have been using FF3 and like it...i don't have a lot of add ons.. But all this talk about Safari 4 made me curious... so i am downloading it right now to give it a go... hope the fox won't be jealous... 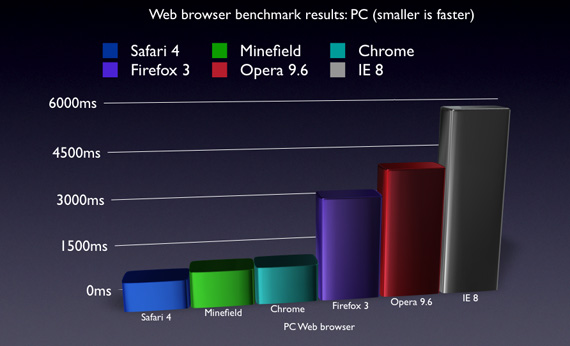 Safari-4 IS a bit faster than FF3. but every time i select a page from the "top sites" thing, it always opens in the CURRENT tab !!! annoying! how can one make it open in a new tab alwyas?
C

I think I experienced a memory leak this morning. I woke up, got on the computer and clicked a link on my desktop to open Hotmail. Firefox popped up and then the computer completely stopped responding, except for the mouse pointer moving. I bet the RAM was completely used up. Had to do a hard reboot.
T

It is probably a poorly designed addon or extension that someone made. Chrome feels the fastest to me, but I still use Firefox because Chrome doesn't have the ability to use extensions yet.
You must log in or register to reply here.

Dec 8, 2010
helix_rider
S
I am shocked. IE8 performance vs. other browsers