I made this thread recently about my upstairs tub leaking into the dining room below. After putting it off, I called my nephew over and we decided to finally figure out what was going on.

Turned out there were 2 leaks: corroded shower arm dripping behind the wall & diverter spindle dripping anytime it was set to shower mode (Symmons valve). We decided to attack the shower arm first because the spindle required a special removal tool that we were waiting on from Amazon. When we went to remove the shower arm, part of it broke off in the copper pipe behind the wall Frantic Google & YouTube searches ensued and the top two recommendations were using a 10 in tapered file and nipple extractors. The file tip was interesting: stick the file straight into the pipe, tap into place with a hammer so the file bites onto the stuck bits of the shower arm and then turn the file CCW using a crescent wrench until the lodged bits come out. Off we went to HD to get the file & extractors. We got back home and tried the file method first, unfortunately to no avail. It kept grinding down the stuck threads of the shower arm but didn't get them out. Next was the extractor kit, which included a special one for shower arms: 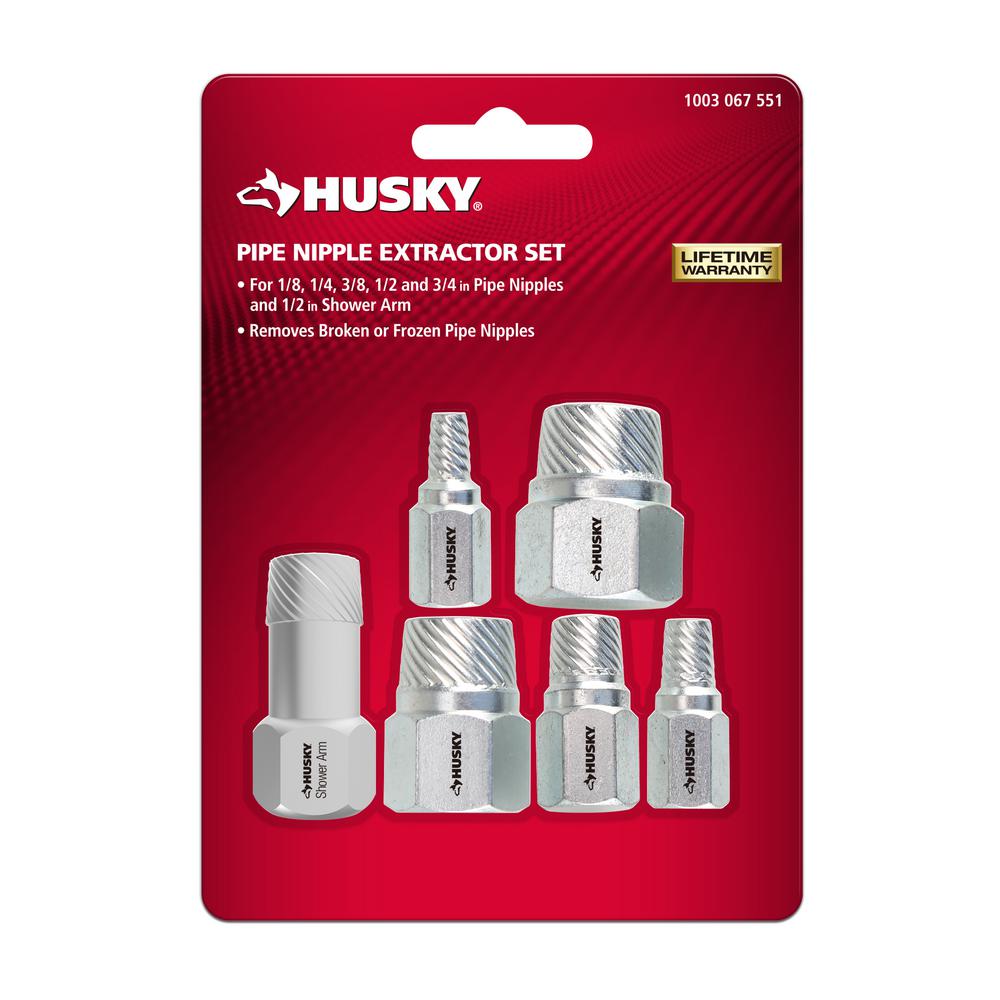 I tapped the extractor into the pipe but it kept going in crooked. A few readjustments later, it went in straight and I started turning it with my crescent wrench. I started getting nervous because I was turning the wrench quite hard and the extractor wasn't budging. Fearing I was going to damage the pipe behind the wall, I let off. I tried again and after slightly leaning into the wrench, it started turning. A few turns later and the SOB stuck piece was out! Some pics and the new arm vs old to show how much of the threads were stuck: I cleaned out the threads of the copper pipe, put some teflon tape on the shower arm threads and reinstalled it. After test running the shower, no more leaks!

The next day, Amazon delivered the diverter removal tool. It's a 4-way that can be used on all parts of the valve when doing a rebuild. 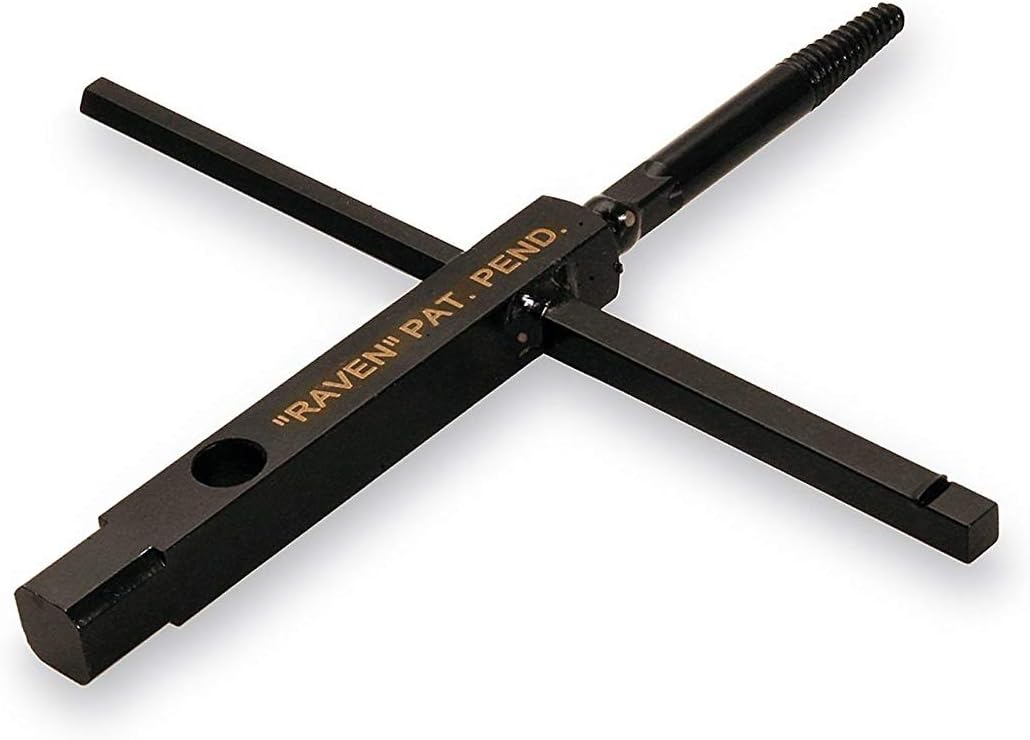 We started to remove the diverter and encountered a problem: The hex retainer nut in front of the diverter cartridge was full of rust & gunk and felt iffy as soon as I inserted the hex wrench part of the tool. I hammered it in and as soon as I started turning, it stripped. I tried whacking the head with a chisel and flat head to see if I could get it to turn at all but no dice. Again, we hit up the internet for help and people recommended using extractors and drill bits. I was nervous about this and didn't want to damage the valve because I got too overzealous with a drill bit. We were about to call it a day when my nephew said we could try calling a handyman to help with just getting the nut out. I was pretty tired at this point and said why not. He found a local guy and texted him late Saturday afternoon, not expecting a reply until maybe Monday. To our surprise, he replied back in a few minutes and asked us to send over pics of what was going on. We sent the pics and even more surprisingly, he said he could stop by in a few hours. He said it wouldn't take him more than 10 min to get it out and he'd charge $20. I thought that was fair for someone coming out so quickly and on a Saturday, to boot. He stopped by that night and was a very nice young man. He said he too didn't want to use an extractor from the jump and asked to see the 4-way tool. The hex nut was originally 5/16'' and got rounded out to who knows what. The handyman decided to insert the 5/16'' square (not hex) portion of the tool into the nut and hammered it in solid. After putting some muscle into it, he twisted the tool and the retainer nut came right out! My nephew and I were so relieved. We thanked the handyman and as I grabbed my wallet, he said since it only took him 5 min, $10 was all I owed him. I really appreciated the guy's fair nature and thanked him again for everything. With the stupid nut out, we popped out the old leaky diverter, greased up and inserted the new one, put some antiseize on the nut threads and tightened it back up using the same 5/16'' square wrench. We tested the shower & tub settings and there was no more leak! We then put everything back together, cleaned up the tub and kicked back on the couch with some pizza & wings.

There is some water damage to the dining room ceiling below which I will address when it is confirmed in the coming days that there are no more leaks (which I don't think there should be).

Sorry for the long post. I usually only do light DIY stuff around the house and this was my first foray into plumbing. Of course, it feels good when a project is successful but hopefully, I don't have to do much plumbing stuff in the future lol.
Last edited: Dec 20, 2020

Nice job, you got lucky with the handyman too.

With pluming jobs, you never know what to expect. Some get down very easily while others not so much!
M

In your 'other' post, someone said your water pressure could be too high.
They do sell Water Pressure Gages to check for that.
I believe you want about 50 PSI / but there is a range.
Water Source Water Test Pressure Gauge-WSPGH100 - The Home Depot


You'll be looking up and checking for leaks in the ceiling until the next big project comes along.
Then you will forget about it and worry about something else.

Totally normal DIY plumbing job. I once started in the morning to fix something in an upstairs bathroom and finished up close to midnight in a crawl space. Old galvanized pipe kept breaking.

I have has that kind of problem with the shower before.
J

What a pain in the arse man.

We had a similar mess in an old home. My buddy who was a plumber came over and shut the water off, then sawed out the old valve, and soldered in a new one.

Of course we had to take out the tile wall, and put in a new surround but I think that took less time than messing with rotted pipes like that, and more straight-forward.
You must log in or register to reply here.

Jan 19, 2021
Dinoburner
N
New head bolts twist off - Anyone Seen This Before?