Can I still use a 4G phone with verizon?

Jethro_Bob said:
After reading those they are mostly the same thing, I've been phone shopping and tons of 4glte phones claim they don't work on Verizon CDMA when "some" do have the 4 G channels listed in the specs. Off topic 32 bit Android needs to "retire" already.
Click to expand...

there's a bit of double speak there...
of course a 4GLTE phone won't work on CDMA. they're different types of broadcasts. (it'd be like trying to pick up an fm HD radio broadcast on an AM Radio... a bit of a stretch, but you get my point, hopefully)
some 4G hardware may not support the frequency bands assigned to Verizon. some say they don't but do...

when they were first going to shutdown the 3G (CDMA) network, we upgraded my parents to new phones(spring 2018). we got Mom an Iphone SE (the first one, still using it), and Dad, he refused to get a smart phone, so after a bit of trial and error with inexpensive used/refurbished 4G flip phones off ebay( we wanted to try a couple models before committing), we settled on this guy: 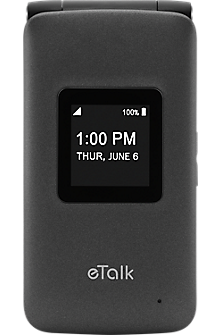 eTalk: All the essentials on a durable flip phone with high-resolution sound, a long-lasting battery and up to 32 GB of expandable memory. Get it at Verizon.

www.verizon.com
the Kazuna e-talk.
we're prepaid customers so you buy everything up front, but at the time that sucker was $29.99 every day at your local Walmart. (he breaks it, no biggie, it's a $30 phone.)
works great, we have a spare unit and a couple spare batteries.

it gets more complicated with 5G phones
according to Verizon, I shouldn't be able to get 5g on my Pixel 6, b/c I got the Unlocked version direct from Google, not the VZW specific model.
no big deal around here, they (verizon) don't have any 5G network built around here. but when I go to say, Columbus, or Cleveland, sure enough, I get 5G indicator on my phone.

that's because Verizon is using 2 Different implementations of 5g on their network... there's the 5G signal, using the same standard as everyone else, and then they have 5G-UW(Ultra-Wideband) that they put mainly in cities and stadiums, etc.
that's the one they advertise as being their SUPERFAST 5g.
5gUW operates on a different frequency than the standard 5g service. and once again, because Verizon has to be different, the manufacturers had to make Verizon specific versions of their phones to use that different frequency.

now, becasue I didn'y buy the version with that special radio, I don't get the ULTRA WIDEBAND experience, but, the normal 4&5G signals are plenty fast enough, and especially for me, because of where I live, there is no 5G, so it's a non Issue...
C

I'm on Verizon and I simply turned the 5G off on my iPhone 12. It saves battery. Went from charging every night to every other night just by turning 5G off.
So the answer is; Yes, if you have a Verizon 4G compatible phone.
A

bullwinkle said:
I would avoid ATT like the plague-they have oversold their network to so many crappy MVNOs that it’s becoming hard, in certain areas (talking poor, underprivileged areas to be PC) to make any calls or do anything with them, including 5G. To make calls, a VolLTE phone WILL be required when the 3G networks go away, even a non-VoLTE 4G phone WILL NOT WORK!
Click to expand...

We used ATT MVNOs since around 2009 ish. Never a problem and I had a work Verizon iPhone to compare with in every corner of my state, never noticed a problem. Cell phone coverage is hard to comment on, it all depends where you live.

As posted just recently went to T-Mobile, good deal and $1600 in credit for 2 iPhone 13s with our older phones as a trade in.
M

Warstud said:
From the Verizon Website :
Device models that are 3G (CDMA) and 4G that do not support HD Voice (Non-VoLTE) will be impacted. Some of the popular impacted devices include:

Yes, my Apple 5S was recently 'bricked' for that reason so I replaced it with a nice 'refurb' Apple XS.

Vern_in_IL said:
This shows where the FCC is..... I can still use my trusty AT&T "Bell" land line phone, but I can't use a 3g cell phone?

We need cell phone standards, not let them drop a generation cause "we need frequencies for 6g....." Force a standard, and stop wasting our time.
4g is plenty fast and there is no need to upgrade on the customers end!
Upgrade the cell tower equiptment, double capacity etc. The dropping of 3g is a crime.

Many people use their cell as a PRIMARY phone, therefore they(wireless providers) need to off FREE compatible phones for the network upgrade. Just as they had to install battery packs at homes when they dropped copper.
Click to expand...

3G has been around since 2001, it’s time for it to retire. VoLTE has been around since 2014, the “newest” phones that don’t use it are pushing 8-9 years old at this point and the amount of people still using them is a tiny fraction of the rest of users. And carriers were offering free and heavily discounted phones to the people still using them for awhile.
V

and call quality, has it gotten worse? (I remember the Sprint pin drop commercials)

I listen to talk radio, and call ins are always dropping out, garbled.

Vern_in_IL said:
and call quality, has it gotten worse? (I remember the Sprint pin drop commercials)

I listen to talk radio, and call ins are always dropping out, garbled.
Click to expand...

I think call quality is vastly improved using VoLTE. I think the issue with call ins to radio shows is it’s processed on the phone and sent out over the air (cell network), into the phone network, then into the radio stations equipment where it’s further processed, and then rebroadcasted again. Each step of that process you’ll lose quality from the source.

4G/LTE Will be around for a while. The woke govt wants 5G and e-sims so they can enhance their tracking. Stick with the 4G/LTE and a physical SIM card in your device.
D

All the Canadian mobile providers dropped CDMA service in 2015 or 2016. My 3G phone no longer worked when I was in Canada, so I upgraded to 4G. (Coincidentally, this happened right after we canceled the land line at the cottage) Seems like the US providers hung on to the old tech longer than I would have expected.

Schandyman said:
The woke govt wants 5G and e-sims so they can enhance their tracking.
Click to expand...

And now the hijacking of the term "woke" is complete.
Do any of you even know what it originally meant?
M

Vern_in_IL said:
I listen to talk radio, and call ins are always dropping out, garbled.
Click to expand...

Many of those "callers" are actually actors working in a studio, with the audio "toasted" to make it seem they are on the phone.

So, could my stepdad still use his IPhone 4?

No. iPhone 4 does not support 4G LTE

Schandyman said:
No. iPhone 4 does not support 4G LTE
Click to expand...

Correct Schandyman.
in iPhone terms, The Oldest you can go is the iPhone 6, or iPhone SE (1st Gen)

This. It took forever for 3G to go away (assuming that it has actually gone away). It's going to take way longer to get rid of 4G. Yes, I used to work for one of the larger phone companies.

Schandyman said:
No. iPhone 4 does not support 4G LTE
Click to expand...

Thank You for the info sir 👍🍻

earlyre said:
Correct Schandyman.
in iPhone terms, The Oldest you can go is the iPhone 6, or iPhone SE (1st Gen)
Click to expand...

Welcome bud
You must log in or register to reply here.

any reason NOT to switch to Verizon from AT&T network?...
2 3