I'm starting to look at lighter weight motorcycles as I have arthritis in my hips, knees, etc. and it's getting harder to ride my heavier Dyna in traffic. I've been looking online at the newer air cooled V7 and V9 bikes and like the simplicity of them. One thing that has me a little concerned is the dry car-type clutch. How hard is it to replace? Has anybody done it or know the hours involved? I like to get slightly used bikes at a low price and fix them up, however, the new price for leftover 2017 and 2018s is actually pretty decent.
G

Have you researched the Guzzi V9 bobber? It's a good looking motorcycle and only about 450 lbs.
P

I haven't ridden in years but I've always like Guzzisâ€¦.simple and classy....I'd rather an MG than an HD any day.
B

Guzzi makes some nice rides, but lack of dealerships + horror stories from a former dealer about getting parts to do repairs makes me think twice! if not an only bike its not so bad. lots of options today + modern Triumphs are smooth + reliable + easy riders, try several styles + brands then decide. i am older as well + very interested in the new bonneville speedmaster as forward controls are more comfortable for me these days + its not so heavy. on that note the spec weight can be deceiving as many bikes are top heavy like my traded 08 porkster, both top heavy + fork flop prone, riding is the best way to know

Originally Posted by benjy
Guzzi makes some nice rides, but lack of dealerships + horror stories from a former dealer about getting parts to do repairs makes me think twice! if not an only bike its not so bad. lots of options today + modern Triumphs are smooth + reliable + easy riders, try several styles + brands then decide. i am older as well + very interested in the new bonneville speedmaster as forward controls are more comfortable for me these days + its not so heavy. on that note the spec weight can be deceiving as many bikes are top heavy like my traded 08 porkster, both top heavy + fork flop prone, riding is the best way to know
Yeah I know about the Sportster (Porkster LOL). Thanks for the advice. I like Triumph and didn't realize parts are an issue on Guzzi. I'll go look at some bikes soon.
V

I have owned Guzzi,BMW,Suzuki and Hondas. Clutch replacement on a Beemer isn't bad. My Guzzi 850 was a great bike and never needed a clutch. I would love to have another one, but I realize at 72 with replaced hip with a 250 lb rating on it, a bike isn't practical for me anymore. My last bike was a GL 1500 and wife and I loved traveling on it. Sold it 3 years ago and now just get to enjoy a classic VW Cabriolet convertible. Gets 32mpg and the GL1500 got 35mpg. Not much different there except it also has heat and air conditioning. Guess I am getting soft in my older age.

I ride a 76 Convert. One of the rarer ones. Guzzi is over built and under stressed My 72 guzzi eldorado had over 350,000 miles on it when i sold it. Parts are no harder to get than others. Go to wildguzzi.com forums you will find more info about guzzi than you will ever need TOMB
R

There is a guzzi specific forum. https://wildguzzi.com/forum/index.php You will find better answers there. Modern Guzzi is becoming quite good. They still have few dealers. parts sometimes take a little time. If you can wrench they are easy to own and ride great. Rod

My brother is into Guzzis and honestly I don't see the reason. The ones of his I have tried seemed pretty weak sauce compared to other European bikes. He has an oooold one that used to be some type of cop bike. What a dog. With all the different brands out there, why a Guzzi?
M

I've been looking at Moto Guzzi's as well but the only dealers are in Arlington, Richmond and I'm practically right in the middle between them. I really like the v7 iii Stone Night Pack but doesn't come with a tach which isn't really needed but nice to have, the Milano & Special however they do include that feature and I haven't looked at the accessory catalog as you have to give them your information before you can even download it. I do like a lot of the features they have, looks to be a comfortable bike to ride, shaft drive so there's isn't a belt or chain to keep up with, they're air cooled which depending on how you look at it can be a positive or negative issue. The only air cooled bikes I have ridden were dirt bikes and I've never ridden an air cooled motorcycle, it seems that it would be easier to maintain as it isn't water cooled where you have to service it every so often which isn't a huge deal, my only concern is heat in the summer and the longevity of it. For me it seems like the dealer network is horrible in that there are only 2 dealers even in VA and both are 2-1/2 hours in each direction, I've also been looking at Triumph's and at least they have a dealer in the city near where I live. Why a Moto Guzzi? They are something that's different and I can guarantee that you will most likely be the only person around in your area with one, not many people know about them and will be wondering what it is exactly. For the most part I've seen nothing but good reviews on them and seem to be bulletproof. They've used the same basic design for years and years so that's were some of the negatives that I saw was where it could use some updating. I currently ride a '13 Kawasaki Ninja 650 and it's comfortable for the most part but when I've been riding all day it ends up killing me, I've tried different gear and the clothing that I wear but I get this pain on the inside of my thighs where it feels like something is pinching you very hard so rather than spend money on an aftermarket seat which may or may not help I've been looking at other bikes that are more comfortable on the longer rides that I go on.

I like the simplicity and I do my own mechanical work. To me, the idea of shim washers to adjust valves is stupid and overly complicated. I don't need a bike that revs to over 10K RPMs. I have a Harley now and the only thing I don't like about it is the weight around town. My arthritis is getting worse and I have to have something lightweight and not a folded up riding position. The Guzzi seems to fit pretty well for what I'm looking for.
L

Silverado12 just buy my Stelvio and you're all set.

Just kidding. It's a beast-- tall, long, 8.5 gallon tank 600 lbs. It is, by all indications, built like a tank. Fit and finish is better than the two Ducati's I owned prior. It doesn't handle like a tank however and is mind blowingly nimble for it's size, not just at speed but low speed maneuvering as well. Fairly quick too for it's size but both of my former Ducati's would seriously smoke it. Guzzi knows how to build quality bikes, 2nd oldest mc company in continuous production behind Harley Davidson. The potential parts availability issue isn't that bad on their high sales volume models which to your benefit happen to be the V7 and to slightly lesser extent the V9. The V7 is their sales leader. Just a quick look on their website at the eight different trims they sell the V7 in proves it's their main product. But I personally like the V9 better mainly I suppose due to the more classic tank design and as mentioned above the V9 Bobber is a really good looking classically styled motorcycle. One thing you will like about a V7 or 9 is the Guzzi exhaust note. At lower rpms and accelerating off the line it has that classic air cooled v-twin note. The valve trains are kind of clicky and ticky.
M

I went up to NOVA the other weekend to look at bikes, we do have some dealerships in the area but nothing like what they have up there and there are tons and tons of bikes to look at all together in one spot. We stopped at a place in Purcellville that had a used blue/white Moto Guzzy v7 ii with a ribbed brown seat, being a ii from searching around the internet shows it to be a 2014-2015 model and I didn't pay much attention to which one it was exactly. I've been under the weather as of late so didn't get to spend a lot of time checking it out but was along the way on our trip up there. They must've just taken it in on trade as their website doesn't even list it yet.
M

I have a 2017 V7III Special and it is a great bike. Light, handles well, plenty of power and all the latest technology. It has been flawless, never had a problem of any kind. The only problem is the closest dealer is 200 miles away. I do all my own maintenance so the only reason to go to a dealer is warranty. I highly recommend a new Guzzi.
G

A friend has a 10 year old Guzzi California and it's been great, but there's only one Guzzi dealer in N.C. His main ownership concern is needing a part and having to wait for it to be shipped from Italy.
S

I have a Stornello 160....but that would be classed as a lightweight. I friend turned up on his V50 Monza the other day, that is a midweight Guzzi I would lust after. He says he wants me to take it for a ride after it is run in after it's rebuild.

I went and looked at some bikes at Moto Richmond (VA) and really like the V7 Special. It has laced wheels, chrome mufflers and I think a grab rail behind the seat. They didn't have a V9 Roamer so I'll have to look at one before I make my final call. Thanks for the help here. The object for me is to get a lightweight bike that doesn't feel topheavy and has a comfortable riding position. I looked at a used Triumph 2008 Bonneville and although I liked the bike it felt a little heavy. The price was right at $3995 with under 2,000 miles.

Silverado12, a Triumph T100 Bonneville is an excellent choice. Get an 09 or newer, they have fuel injection. They do weigh 500 lbs but are bullet proof.

Originally Posted by MotoGuzzi
Silverado12, a Triumph T100 Bonneville is an excellent choice. Get an 09 or newer, they have fuel injection. They do weigh 500 lbs but are bullet proof.
Yeah I see that the 2008 sells for a lot less than the newer ones. Is there anything inherently wrong with the carbed bikes? I don't mind working on stuff if it's a decent, reliable design to begin with. I actually like the old Amal carbs on the 1976 Bonneville. 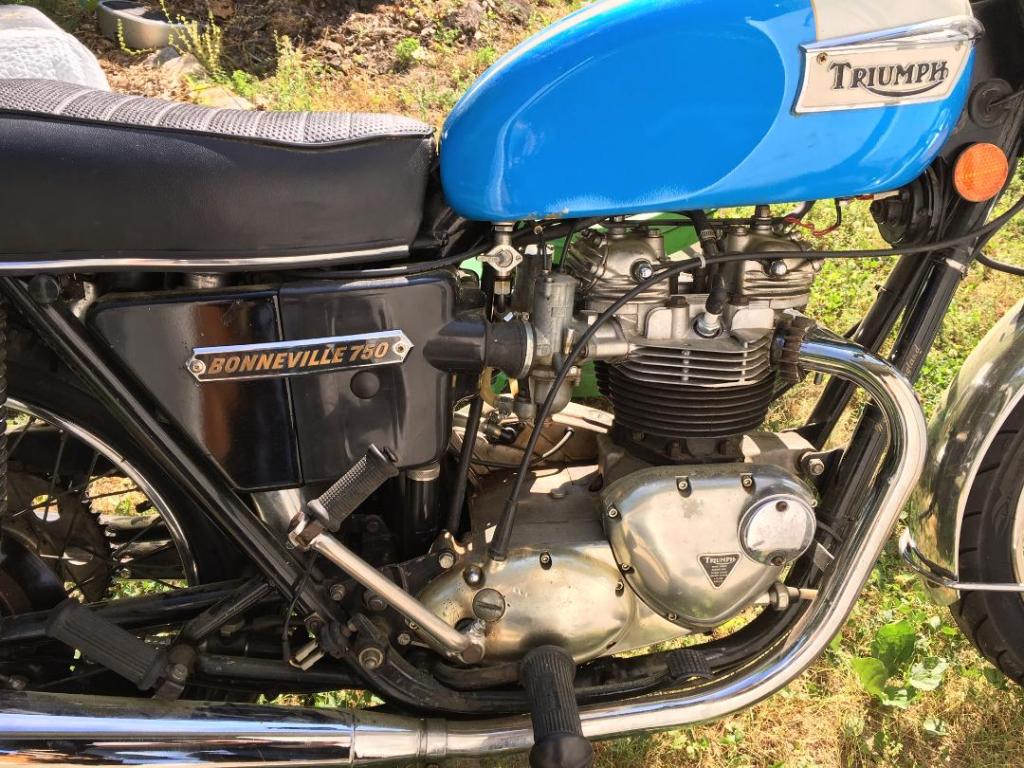