I've built more than a few "homemade" speakers. I don't do it anymore, as it takes too much time. But, the results have always been very positive. Today, there is a culture of "perfect crossovers" that create amazingly smooth frequency response curves and perfect blend between drivers. I find that these overly complicated crossovers sometimes create a dull sounding speaker. But, that's just my opinion. I'd rather use bi-amp or tri-amp configurations and electronic crossovers, when a complex speaker design is chosen. Anyway, nice choice. I'm sure you'll be happy.
Last edited: Sep 22, 2014
T

I think I spot a cold solder on there, right there between the red wire and the round thing a ma jig....

I'll be very interested in your review whan finished. I've been eying something like this for my upstairs living room/kitchen. I need something that would work well for general music listening, without being imposing.

I recently got back into killer audio. Back in the 80's, I'd collected just about anything silver faced from Pioneer but through moving around working in DoD and a divorce, they just "disappeared." I've slowly got back into it and got my hands on a 80's Pioneer SA 8800 non-switching amp, same kind I had in the 80's, off of ebay. Had to take my time because every seller out there thinks their old amps are worth their weight in gold and then finding one that works correctly is another issue. Went through it and checked all the wiring and got it working again. Also scored an RG-2 range enhancer that needed some work, but got it up. Really cool watching the blue fluoro scan meters work. I had a older 80's pair of JBL 112's that I'd forgotten about that had been sitting in my Dad's attic for years. Pulled them out and tested them. Electronics were good but speaker cones were rotted. I re-coned them and holy cow batman......my ears are in heaven. Forgot just how much better a system like this sounds. My friends are all blown away.
V

Schmoe, Between the compressed formats and the portable players that have taken over, most people have been so deprived of high quality two-channel audio for so many years at this point, that it is a total REVELATION when they hear it again. Many youngsters have yet to hear higher resolution audio in their lifetimes. To them, even a Redbook CD is something alien at this point. Sort of like living one's life drinking instant coffee. When I fire up our half-century old Fisher tubed front end and feed it through some rather musical sand amps to a big pair of Thiels, and that stylus touches the groove, we have to lift their jaws off the floor. Tubed receivers sing all over the house here. I even wrench to a lovely Marantz 2230 in our garage. I'm hoping in the years ahead that old-school high fidelity audio gets rediscovered, as a lot of the old vintage and classic gear has already found its way to the landfills (much of it still working), and there's very few people making equipment of that sonic and build quality anymore.

I hear you. My neighbor had a Pioneer SA 810 sitting on top of the trash can about two years ago. That was the "intro" model in the 80's for the blue fluoro scan meters. I about whizzed my pants and asked him what's wrong with it. He said nothing and said I could have it AND the matching tuner.....let me tell you about my garage stereo setup!!! LOL!!!! I just couldn't believe he was tossing it because he didn't use it anymore. You can still find them all over ebay, but buyer beware. 99% of the sellers are the ones that inheireted from a grandfather, father or uncle and they all say the same thing....it worked perfectly up until they quit using it. That doesn't tell you much other than it was stored inside. Sadly, Satian herself (step mom) tossed ALL of my dad's old 70's stereo gear...Akai reel to reels, pioneer and techica record players. Some Fisher, Sansui and Marantz amps. He even had the "quad" stereo setups. Also tossed a bonanza of my 80's records.....Rush, Queen, Dire Straits, Police, DiVinyls, Clash....you get the picture. I still think of all that stuff every day and just fhisses me off to no avail. Now setting in the Clarksville Tennessee Landfill. He had the ultimate receiver...the Marantz with the oscilloscope....boy I miss that. I'm having to run my music through an older Pioneer CD player and although it's better than the normal stereo set up, it's still not like it use to be. Looking for a Pioneer SA9800...top of the line for Pioneer and after that, they started going downhill...best price for one that "works" that I've seen is around 700-ish.
M

Originally Posted By: Schmoe
Had to take my time because every seller out there thinks their old amps are worth their weight in gold and then finding one that works correctly is another issue.
Don't you know it. My first plan was to find something of vintage. Either a 70s Pioneer or Superscope-era Marantz. What an effort in frustration. Detroit isn't a big area for hifi to begin with, so the pickings are slim. I don't know if people go on eBay and see prices for restored amps and think their dusty piece that's been in the basement is worth the same or what, but some of the asking prices are just silly. Especially on Pioneer pieces that need an obvious recap. Not that I'm opposed to recapping an amp, but I'd prefer not to pay a premium for the pleasure of doing it. About those big old JBL and Cerwin Vega speakers from the college house party days, the same guy who designed the speakers I'm building, Paul Carmody, also has designs for two "vintage" style speakers. One is an old school 3-way monkey coffin design called the Tarkus: https://sites.google.com/site/undefinition/tarkus And another is a modern take on a classic rocker, a 3-way using a paper woofer and silk dome mid and tweeter called the Classic Revival: https://sites.google.com/site/undefinition/daytonclassicrevival

Thanks for that!!!! Just may be a new project of mine!!! I'm still looking for old amps and to me, the Marantz oscilloscope is the holy grail but the prices....geesh.

Marantz 2500 I worked at a Marantz Authorized repair shop in the 70's and 80's. The boss had a 2500 and we serviced a lot of those old units. Excellent quality, great sound.

You got any laying around???
V

Originally Posted By: Papa Bear
Marantz 2500 I worked at a Marantz Authorized repair shop in the 70's and 80's. The boss had a 2500 and we serviced a lot of those old units. Excellent quality, great sound.
Did you work on any of Saul's earlier gear? THAT was the holy grail of audio in the late 50's to mid '60s, and good condition pieces draw huge dollars today. Better than Mac. I enjoyed a 10B back then, when the FM signal measured up to it. For a little less, you could own a Fisher or Scott, which offered 95% of the performance. The very best Fisher tuners (particularly the front ends) and pre-amps were as good as the golden-era Marantz. But once the sand revolution, Japanese invasion, and wattage wars occurred, people were literally tossing these working audio masterpieces in the trash. Today, the commercial FM broadcast signal is such low quality, these incredible tuners are wasted and relatively useless.

Always thought Revox amps from the 70's were the best but they were pricey even at that time.
V

Originally Posted By: Schmoe
Always thought Revox amps from the 70's were the best but they were pricey even at that time.
Nope. That all came later, along with the "high end", and the salon insanity and $1,000+ cables that followed. But having owed systems that cost more than a car, I will tell you that the musicality of that earlier era was never really bettered. I eventually came back to it, pairing it with more modern digital sources and some speakers where convenient. Back then, guys with lots of money bought Mac or Marantz, celebrities and people not wanting to spend for a Mac bought Fisher, or sometimes Scott, and then there was a broad range of other brands such as Dyna, Sherwood, H/K, and Magnavox, and others. I'm sure I missed a couple. All tubed, most of it hand assembled in NYC or along the east coast. It was beyond discrete construction, and there was a very human element to the point to point wiring of each piece. Back then, it was half hobby, half DIY to configure a system. The top makes were noted for their founders, like Frank McIntosh, Saul Marantz, Avery Fisher, and H.H. Scott, who were intimately involved in the design of their equipment. Each was carefully "voiced" to the musical tastes and objectives of its founders and head engineers, right down to tube, capacitor and resistor selections. Some, me included, consider that period the golden era of home audio and "hi-fi". It was all pretty much over by 1970.

Nice information. Appreciate that and glad I'm not the only one who loves great audio. I'm trying to teach my 10 year old the differences from now to then.
V

Happy to share. If you ever have an a chance to grab one of those old classics, jump on it. You won't be sorry. Kennedy used to take a portable 6BQ5 Fisher system around with him on AF1, and Sinatra used to seduce his women to his albums played through an 800C. Sammy Davis was a Maggie owner. Don't get me started on audio vacuum tubes and the equipment. I can go on all day about them. A very different time.
M 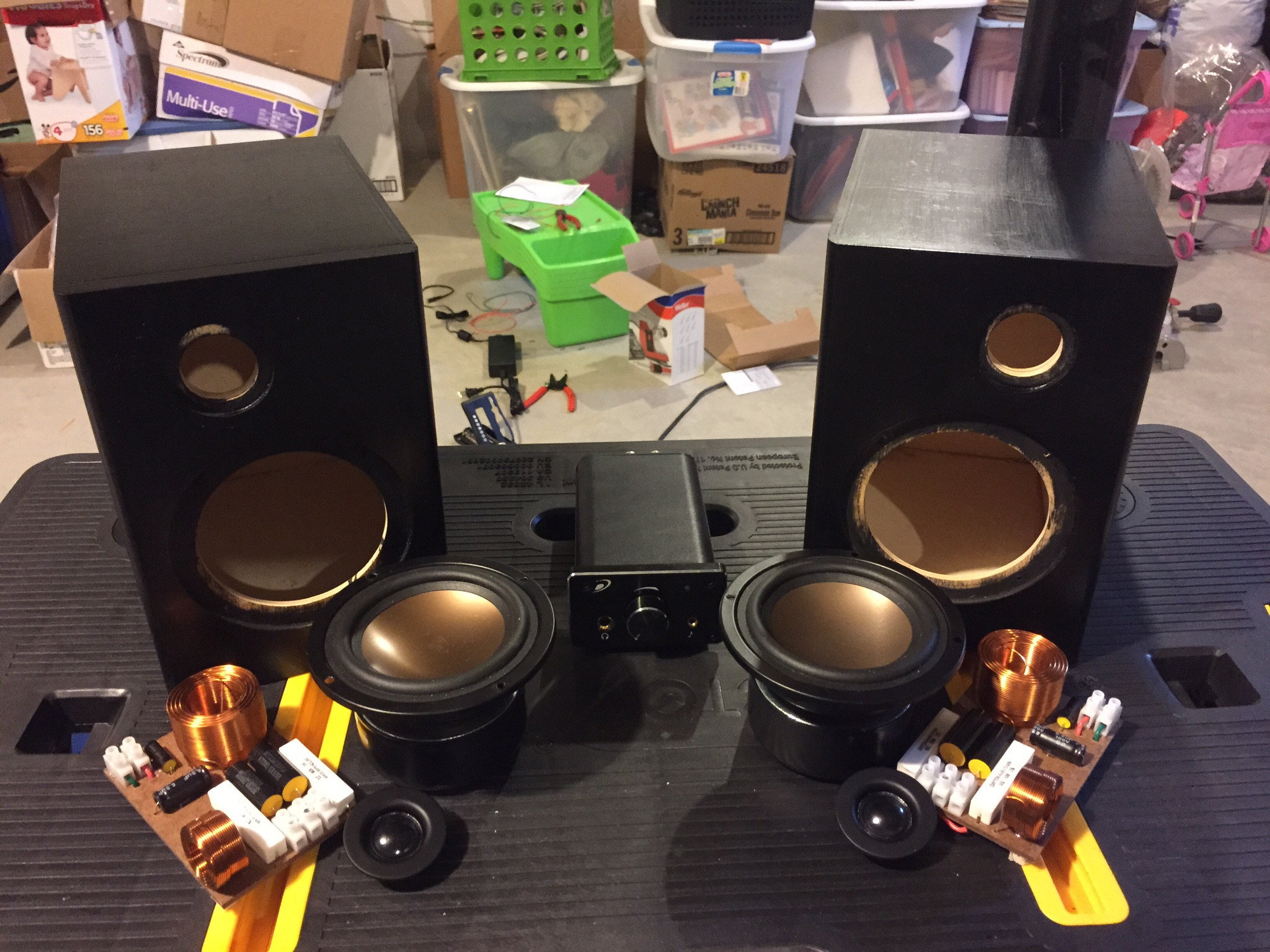 Everything is all ready for assembly. Please excuse my messy basement. You can see my "test bench" in the background where I was making sure my crossovers were functioning properly. I'm not really happy with the finish. I used a Minwax one-step stain+poly and I'm just not pleased with the results. If I had to do it again, I would have just painted them, something I'm more familiar and comfortable with. They will serve just fine in their intended location, I just don't think the finish is quite worthy of a living room. Oh well, live and learn. Also in the picture is the small Class T amp I'll be using for power.

Originally Posted By: MrHorspwer
I'm not really happy with the finish. I used a Minwax one-step stain+poly and I'm just not pleased with the results.
How about if you apply another coat or two? Love the look of those drivers, BTW!
M 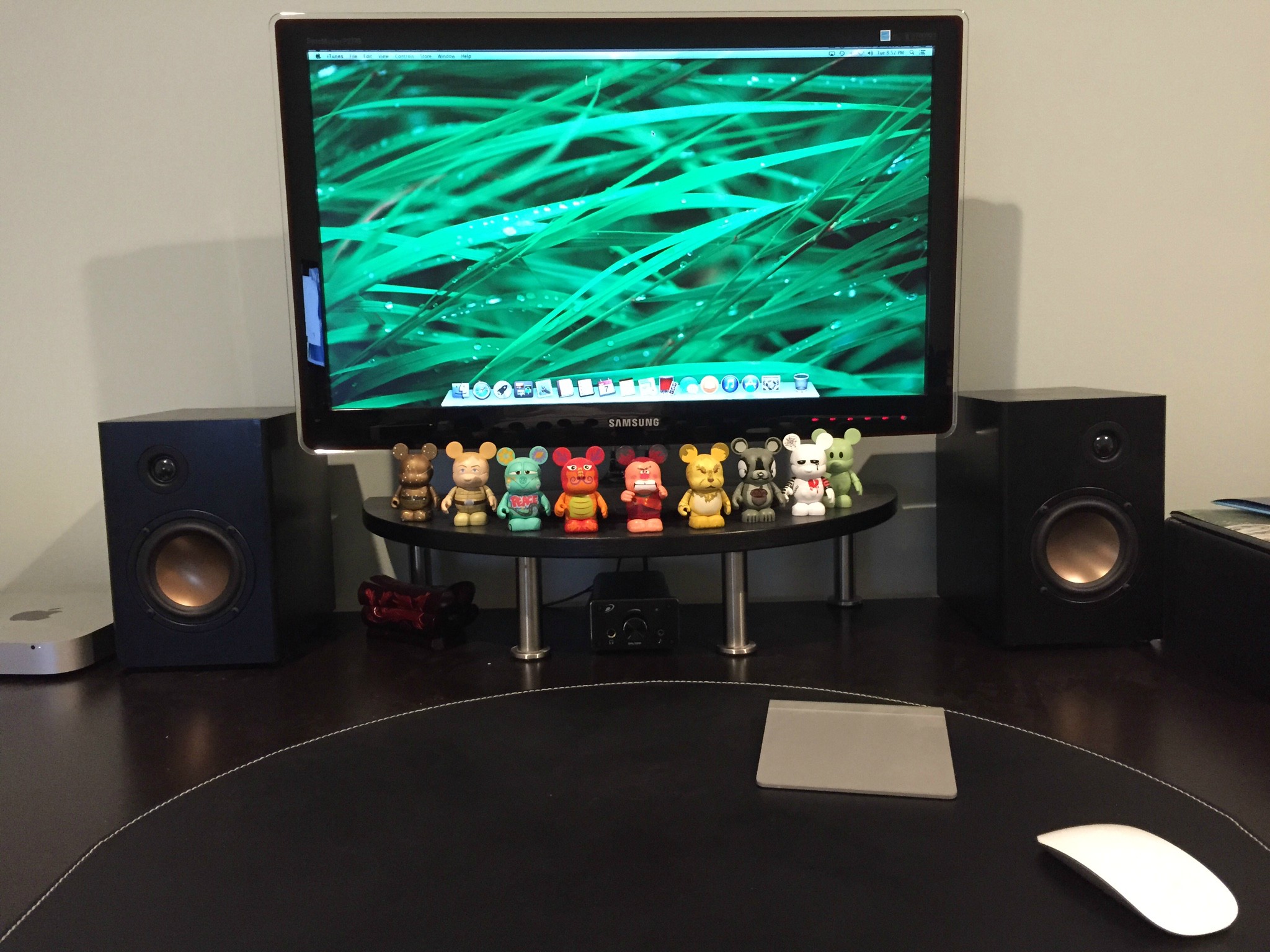 So here they are, all finished up. My first listening impressions was that they were very closed and didn't have much sizzle. This was more apparent at lower listening volumes. Once the volume knob twisted, they began to come alive. Over the week or so that I've been listening to them, this has gradually started fading. The speakers have become more detailed at lower volumes and are beginning to have some sparkle to them. My impressions probably aren't helped by the fact that all I've fed them are compressed 256 kbps AAC files from iTunes. All in all, I am happy with the project. It was super easy and pretty relaxing. There's always a sense of accomplishment in doing a project yourself, especially when it turns out well.

256 kbps AAC is pretty good quality. Can't tell it apart from source material, unless you're a superhuman. What does make a difference is the DAC used. BTW, speakers look great!