I just bought a tire I've often said that I wouldn't buy. The LE2s have a tread pattern that changes quiet a bit as it wears (in terms of some grooving going away), but my gut told me that these are what I should buy. My other choice would have had me out the door at Sam's Club at right at $500 on a set of four Goodyear Assurance Fuel Maxes. I just didn't get a warm-fuzzy on those after reading a lot of reviews. I've read few negative reviews of the LE2, so I pulled the trigger. They're 25% off right now. That helped. They're a heady $170 each in my size (225/65R17), but the sale brings them down to a more palatable $128. Even Michelin Defenders are a sight less than $170. I talked the FCAC store down to $13/tire for road hazard vice their standard $25/tire. So I made a $52 gamble that I'll have to replace at least one of these. And they gave me lifetime balancing and rotation for $14/tire. So all in, my Discover balance is now heavier by $673. I had a good experience at the store. The manager helped me this morning, and was one of those guys who tells everyone how long he's been in the business and he's free with his opinion on most everything. I asked early on if they can mount the tires with the DOT code facing outward, so I can read serial numbers/dates if I need to down the road. He commented that most people have never heard of a DOT code, and I think that bought be enough filter from him to not try to sell me on additional turn signal fluid or headlamp bushings. I was in-and-out in 90 minutes, including the free alignment check. The tires themselves appear to be superb. They're very smooth and quiet...the whole ride now is kind of "boring". It's just completely non-eventful, and that's a good thing. The car will still dance with a flick of the steering wheel (grip is good), but there's so much less road noise and graininess to the ride that it feels like a different vehicle. I like it a lot so far. They appear to have balanced out just fine. I wish the three sets of tires that BJs has installed on our Acura recently would have balanced as easily. Will the traction fade as the tire wears, due to vanishing grooving? Maybe. I don't do a lot of winter or wet road driving...90% of my travel is on dry pavement, and so I figured that this is probably less of a problem than I make it out to be in my head. As well, Firestone makes two versions of this tire in my size, a T-rated one and an H-rated one. Stores apparently stock only the H-rated one, and it's got 12/32" of tread vs. the 10/32" that the T-rated tire has. So I'm starting out with a really thick tire to begin with. I feel sure that it'll make its 60,000 mile tread life warranty, and perhaps even more. I took the alignment printout home to correct the alignment problems the car did have. Both front and rear was toed in too far. The front toe was REALLY too far in. I have a laser level and a long 2x4 with graduated scales on either side that I can use, along with some high school trigonometry, to really dial-in the numbers given a baseline. I made a slight tweak to rear camber first (I had it at -0.5 and -0.7 degrees, and set both sides to -1.0 degrees), then I corrected rear toe (set it to close to neutral). Once that was set, I moved to the front and set that toe as close to neutral as I can get it. I'll observe what the car's doing this week and I may make some very small tweaks next weekend, but knowing where I'm starting is good. Overall, I'm pleased with the tires and with the service I received from Firestone Complete Auto Care. I'll update this thread over time with my observations on the tires. 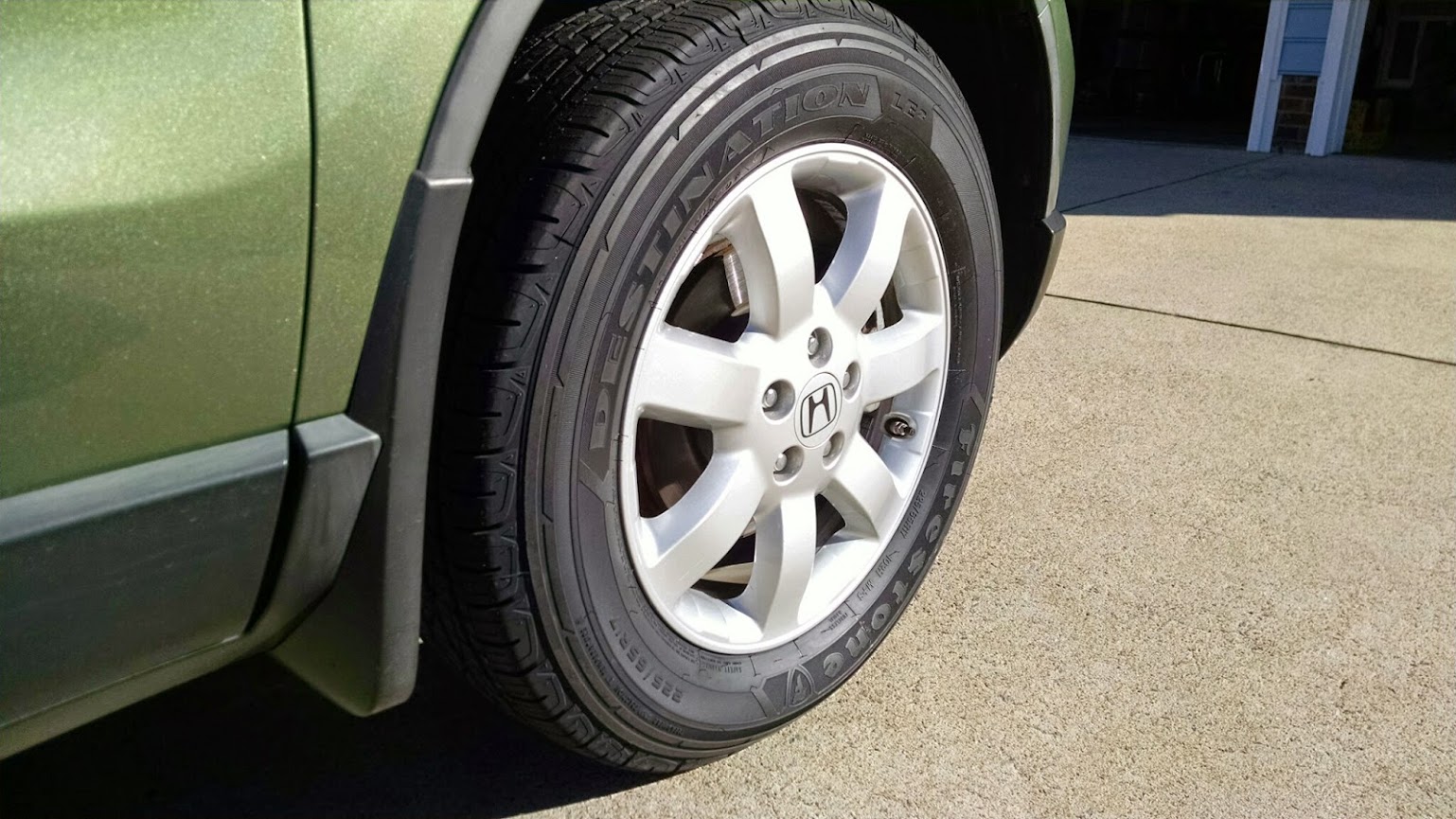 The sidewall doesn't really look as saggy as it does in this photo; it's just the camera angle. In fact, at the 32 psi I have them set at right now, the sidewalls don't have much "sag" in them at all (which I like). 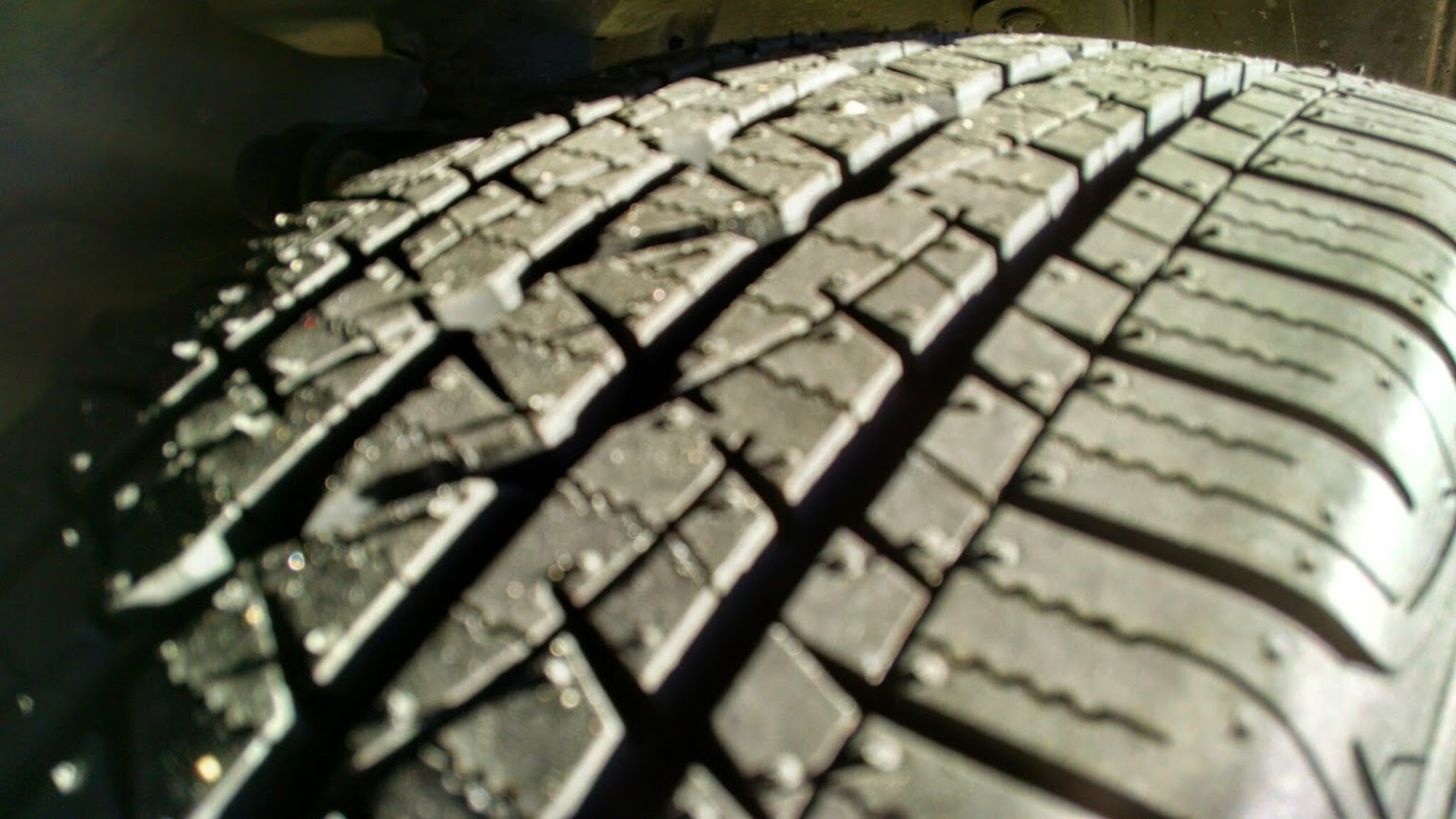 Dry traction should stay the same, Dry handling will actually improve. Wet traction and winter/snow traction will decrease after half worn. Possibly significantly worse. They are above average tires.
R

Looks good, hope they work well for you. Side question, what color is your CRV? Haven't seen that color too often around here. Looks like it really pops, or is that the sun?

Excellent tires, you made the right choice. I have about 25K on mine and they are still very smooth and quiet with great traction and handling in rain or on dry roads. Still have plenty of tread left too. I should easily get 60K or more out of mine. I have not noticed any change in the tread pattern either. I love my LE2's and will put a set on my wife's Nissan Rogue too when the time comes.
S

I've got a set on my work Jeep and am very pleased with them. Dry and wet weather traction are great. Deep snow traction is not a good as a more open tread tire would offer, but this trade off is fine with the reduced noise from the tire. I believe you made a good choice.

Originally Posted By: Hokiefyd
I just bought a tire I've often said that I wouldn't buy...
OK, I've seen it all now. This planet IS coming unglued at the seams...
O

Nice looking tires! Well reviewed too. I know you were debating between those and the Ecopias, but the price difference is pretty big. I've found that the mid priced/more discounted "high end" Firestones are a great value. My gf's Civic got a new set of the Affinity Touring tires last year and they were very impressive in the snow, plus the general ride quality and noise. (Same tires as the Precision Touring on TireRack). I'm eager to see how the tire works out for you long term!
B

keep us updated! These are on my watch list for the escape.
H

Originally Posted By: redhat
Side question, what color is your CRV? Haven't seen that color too often around here. Looks like it really pops, or is that the sun?
It's called Green Tea Metallic, and yes, it really does "pop" in the sun. Here are some representative pics from a trip a few years ago to the Biltmore: 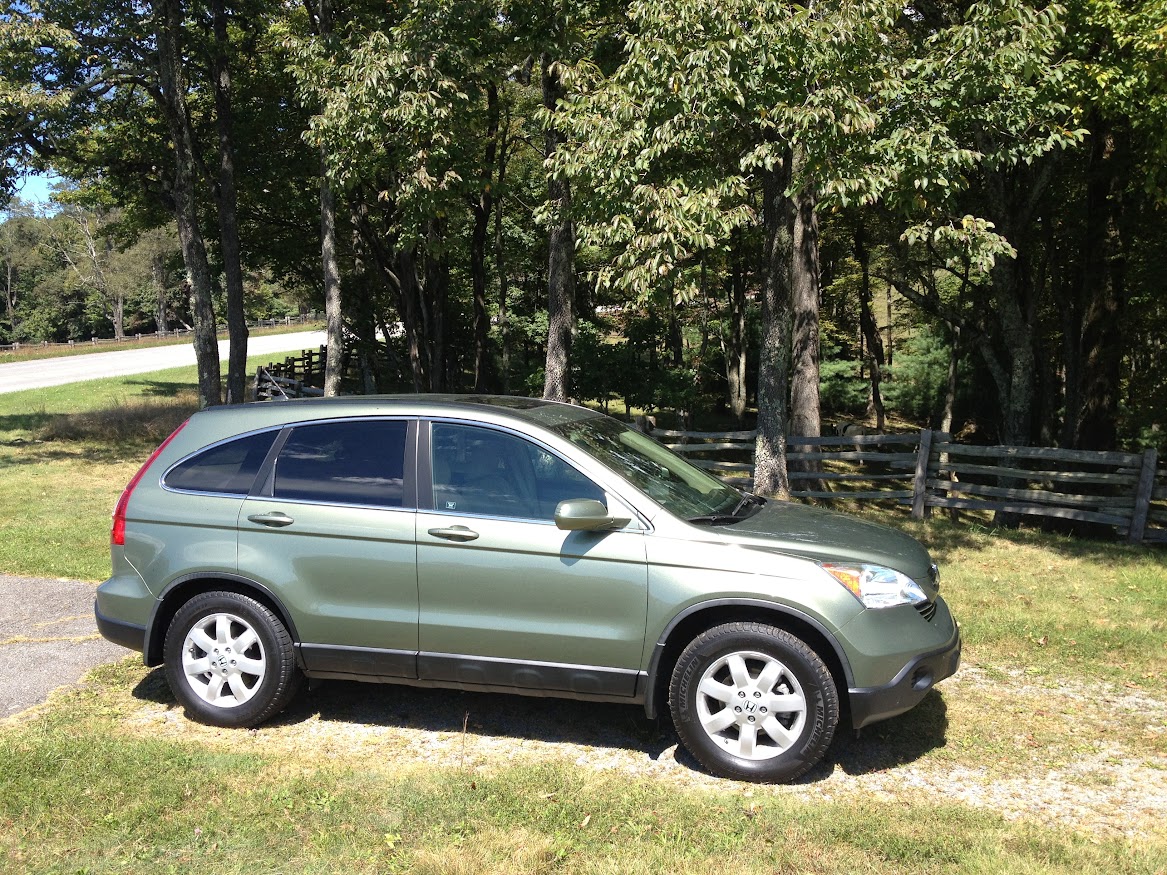 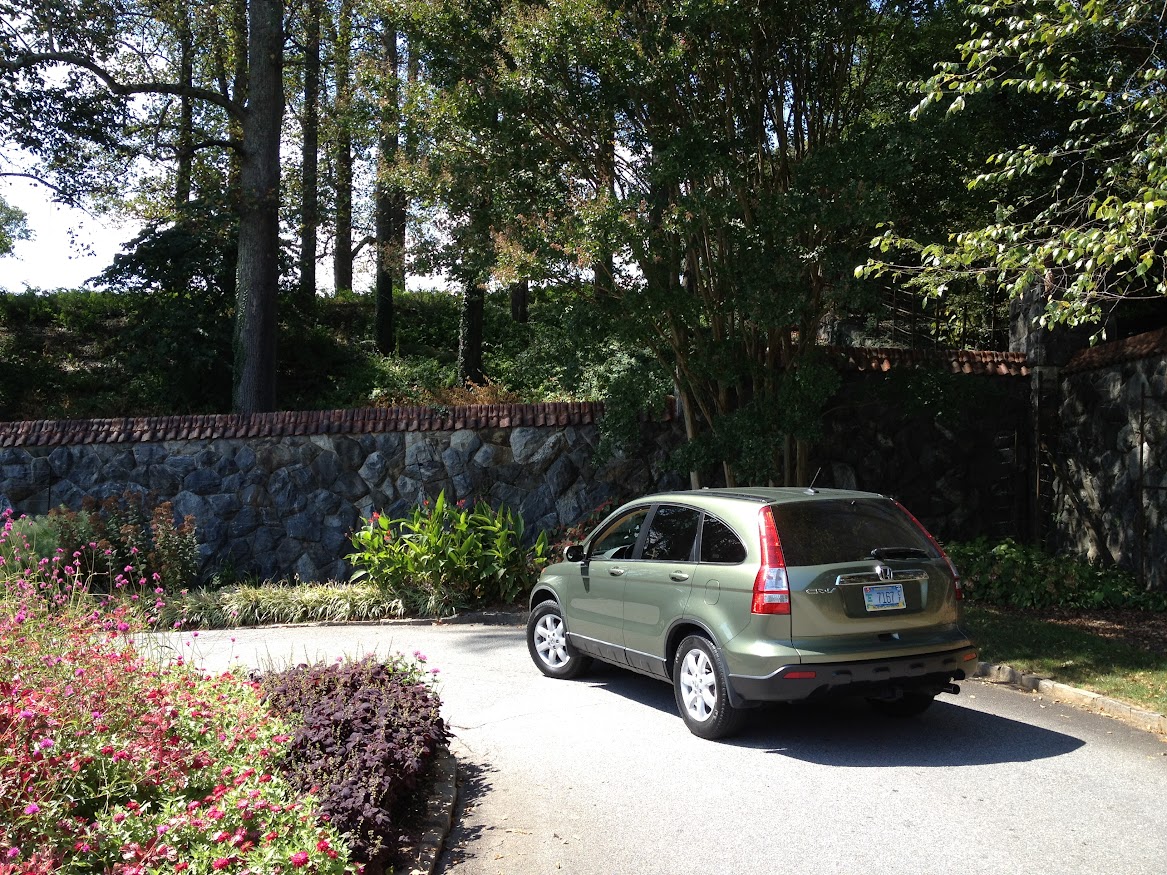 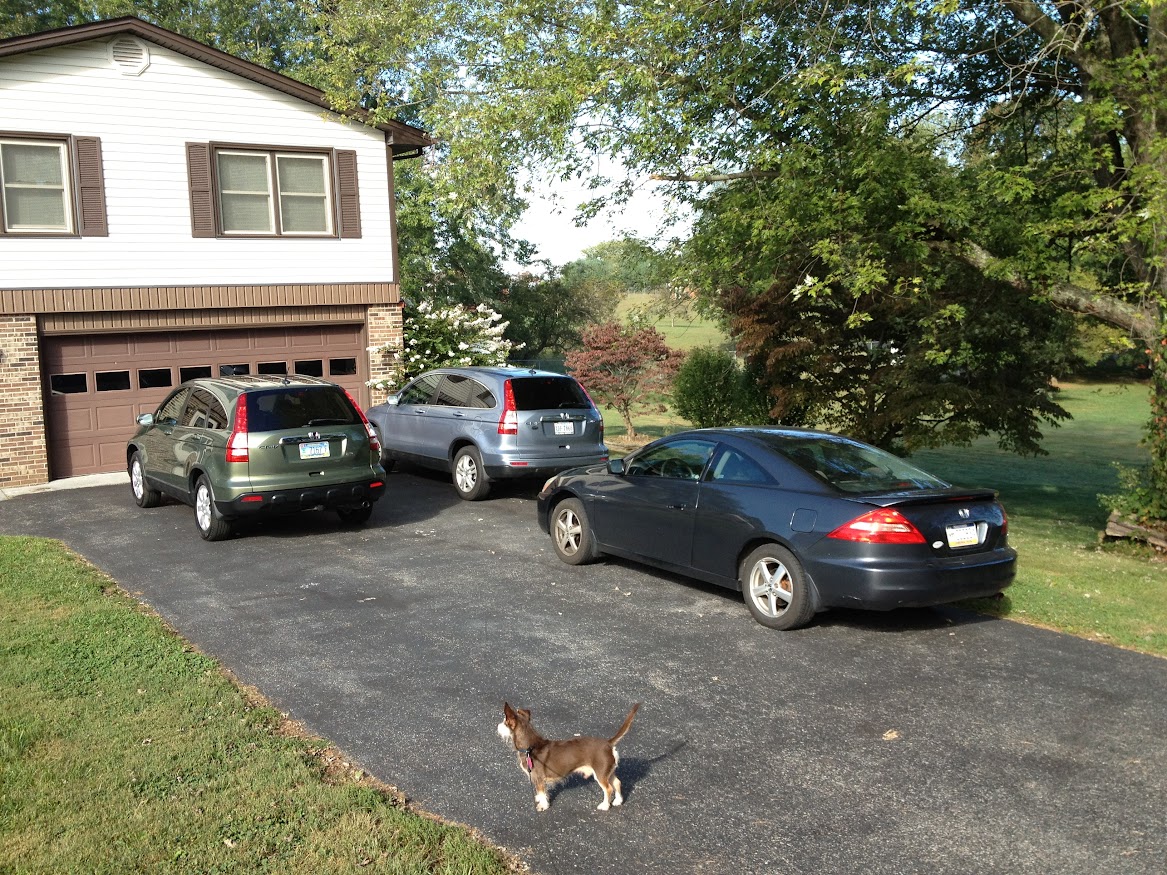 This is our CR-V next to my in-law's 2011 CR-V (I think theirs is Alabaster Blue or something like that), along with my brother-in-law's 2005 Accord. From my observations, the only other color that I've seen similar to this is some late model Fords. I think theirs is called Ginger Ale Metallic.
M

I have ~25,000 on a set that sees heavy seasonal towing. They have held up very well. Even over half worn, they are far better than the goodyear wranglers that the truck came with in the wet stuff. Wet traction has diminished some, maybe 25% at this point. hard to quantify but it does spin out in the turns from a stop. I rotate them "whenever." there is a very faint cupping noise showing on one. It's a mis-matched set, however, as one was replaced by insurance following an accident where another car hit my side and sliced the tire. In general, the wear is very good and I have not had issues with hydroplaning as the grooves shrink. They have done everything I have asked of them--- they are only weak in off-pavement situations, which is expected, typical of low-noise smooth highway tires. My wife's car will get a set of these when it's time. My truck may go to something a little more rugged.
H

I decided that I'm very impressed with these so far. They're SO quiet on the road. What was a roar with the near bald old tires is now just a muted whisper. I know all new tires are great compared with old ones, but these are quite a change. I'm also happy with the 12/32" of tread depth. At this point, I'd not think twice about putting a set on our MDX.
R

Neat color there. Thanks for the photos... really like the color.
M

Hokie--- yes these would be a perfect match for the 02 MDX my wife drives. I also appreciate that they have a fairly stiff sidewall, especially compared to the mix of GY and Yoko's that the truck had before. I can't say that I have seen any of the LRR qualities they advertise turn into actual numbers at the pump, but they certainly didn't lose any mpg either. Glad you are happy with them!
C

I believe that I mentioned earlier(but, don't quite remember) that my buddy installed the Destination LE/2's-225-65-17 "H" speed rated on his '11 Equinox 2WD 4 cyl. Overall he likes them but says, they're no better in the snow than the Michelin Latitudes that he took off early(8-9/32nds). I told him that it's the NOX, not the tires. There just isn't enough weight over the front axle but, he's more interested in MPG than anything else. TRADEOFFS!
H

Well, I will say that the Latitudes I had on my CR-V were fantastic in the snow. I'm not sure a true all-season tire could improve much upon those Michelins for snow performance. I'm sure the LE2s will be fine. I felt the sidewalls on my 225/65R17s before they installed them and I think they have a fairly flexible sidewall, at least compared to the Goodyear Assurance Fuel Max tires at Sam's. The Michelin Defender XT's sidewall feels about the same as the LE2's (flexy). I prefer a more flexible sidewall with the option to "tune" the ride with air pressure if I desire. Meep, they may have firmer sidewalls in your truck's size. We're taking a 600 mile trip this weekend, and we'll be taking the CR-V. I look forward to seeing MPG numbers, though I don't expect them to be super (windy conditions, cold weather, mountains, etc).
C

Again, my buddy's NOX is 2WD. I will assume that your CR-V's are AWD??? Snow traction is my his only complaint though, he's never gotten stuck in the snow. He just doesn't like the slippage that he is experiencing!
H

I have a set on my Sorento, they now have ~30k miles on them; and I have been very pleased with them. They seem to be wearing evenly, though I have noticed a very very slightly reduction in traction in the wet when starting from a complete stop. Beyond that I have had no fears of hydroplaning as the tires are very sure footed in wet and dry. It hasn't snowed enough in the STL area since I moved for me to judge snowy conditions with the tires since last winter when I put them on. I've been really impressed overall; and I may well put another set on the Sorento when this set is done which may be going into winter '15-'16.