I'm trying to set up shop for the winter in my unheated(other than what bleeds out of the house), uninsulated garage. I worked out there for an hour today and was nearly frozen by the time I was done, despite the fact that I went out of my way to put 100W incandescents in all my work lights to try and at least keep things warm under the hood of the car(where I was working). That doesn't change doing other stuff in the garage, though.

I have a preference for kerosene, as I've always perceived it as being a lot more inexpensive to operate than propane. I can usually find K-1 white kerosene at gas stations for ~$4 a gallon. I've not bought propane in a while, but a 20lb refill seems about $20, meaning it will cost about the same as a 5 gallon tank of K-1.

What I'm looking at in Kerosene is just the good old classic radiant-type round heater, most of which seem rated at around 23K BTU. I can get one for $100-150. I'm familiar with these heaters, both in output and operation, and know they are a good size for something the size of my garage, maybe even enough that I'd not need to run it full blast. The numbers I find are 8-12 hours per 1.9 gallon fill. That puts it, at the low end, at about 21 hours on a 5 gallon tank(or a bit less since I know I can't fill a heater without spilling some.

I'm not overly familiar with the propane options out there. My BIL swears by the Dynaglow type that fit right on top of a 20lb cylinder. A quick search rates these at 15K BTU, and the run time on 20lbs is stated at 28 hours at full blast.

Of course the lingering question out there-is 15K BTU going to be enough, or am I going to need a second? I don't have dimensions offhand, but I know also with the almost complete lack of insulation I'm going to need more space than a heater would dictate.

Still, though, the kerosene heater seems less expensive to run, although IIRC efficiency drops if run at less than full blast. That does make sense given how much more energy dense kerosene is than propane.

The only thing that does throw me off, and maybe I'm being overly cautious, but I tend to always crack the garage door a bit on kerosene. I know as long as they're running correctly the risk of CO is minimal, but it's still there(of course also in propane, but it's a bit easier to get right). Kerosene does smell though, although there again good K-1 in a properly operated heater(with a clean wick) minimizes that. The other part of that is that either can end up way too humid with either type if not vented a bit.

What would you all choose?
J

Anything propane with a blue flame.
A

Had both and now just propane.
Lot less of a smell.

I use propane for the 2-stall garage.

I have an uninsulated two car garage with six windows and uninsulated garage doors. After much research I decided on propane radiant heat. I chose radiant because it heats people and surroundings and not so much air. Picture yourself on a 25 degree day getting into a car with the sun shining brightly and warming you. That is what radiant does. Even though the air is cool you feel warm.
The other night I went to pull the wheels on my car and turned the unit on. It was about 30 degrees. Within a half hour I had to put it on its low setting because I was getting hot.
I have a Mr. Heater with three round heaters on the top. I can range it from 10,000 Btu to 45,000 Btu. This gives me a quick warmup and easily cut back as needed.
I have a 30 lb propane tank that I clamp it onto. You can also use a 20 lb tank.
I have a carbon monoxide detector which has yet to alarm. It burns clean with no soot or odor and is silent.
I highly recommend the unit. Cleaner than kerosene and more output if needed.
Having heated with kerosene in the past I can tell you that this is the way to go.

I'd go with propane all the way. Way less fuss, smells better. No spillage hazard during refueling. For a two car garage, I would buy a 60K BTU torpedo style heater.

When I lived in NC, a 22K Kerosene heater would keep my house toasty. But in my garage, it just could not pass muster, even though the garage was insulated. My vote is for propane.

I use K1 clear kerosine in a wick type heater.
B

The first winter in my garage, no insulation and heater was not installed yet... I wanted some heat to continue work inside roughing in electrical, framing, etc... I covered the ceiling and exterior walls with poly and ran a 60k torpedo inside on K1. I kept a CO meter inside, it never registered more than a few PPM, but the fumes certainly were noticeable after a while and my clothes smelled after a day inside.

I think I used ~25 gallons of dyed K1, from our oil guy, working the weekends over the winter.
L

I like the good old vented green Modine ceiling hung units. They work very well and can be jetted for natural or propane. They were made in many BTU ratings and show up on Craigs and other sites. Mine was made in 1965 and I've had it for 30 trouble free years. I wouldn't use anything unvented. Good luck-
S

jhellwig said:
Anything propane with a blue flame.
Click to expand...

Every one be careful. You want a catalytic propane heater. There are non catalytic versions out there that produce carbon monoxide.
Last edited: Jan 11, 2021

Don't know how un-insulated your garage is, but my 2 car is un-insulated with an open attic. A 23K round type kerosene would not suffice at all. I have a 140K BTU torpedo style and it heats it up pretty decent. It's loud I will say that, don't plan on listening to music with it running. There is a slight odor when it fires up and shuts down, but not horrible. I've only ran K1 undyed in it so far. It might be a little overkill though, they make 80K versions.
J

Snagglefoot said:
Every one be careful. You want a catalytic propane heater. There are non catalytic versions out there that produce carbon monoxide.
Click to expand...

A blue flame does not produce enough CO to be an issue in slightly drafty area. Bigger issue with catalytic is oxygen consumption but that is also an issue with a blue flame.
A

I use a 10k Kerosene in my partly insulated garage. After about an hour its comfortable to work so I preheat it before hand. It uses about a gallon per 10 hours. Mine is an Aladdin model from the 1980's, my dad used to run these in the house when oil was expensive back then.

On a side note I have a couple of these (pic below) that I have used in cold weather camping trips.They are catalytic and there's no flame. A full tank (1 gallon) will run about 24 hours. Since they were used when I got them I test the catalytic element but enclosing the running heater in a 10x10 tight space with a CO meter. If anyone ran a leaded fuel through them they're garbage. They're designed to run on Coleman fuel and smell is minimal.

dont see your location but COAL is a great economical heat, +wood is even cheeper but more work unless you buy it. you could run a cheep hand fired unit or a small stoker stove with a thermostat that stays on. i live in pa=coal reigon + turn off my oil when its gets + stays under the 30's, about 2 ton for a heating season, a little less than $200 + haul it in myself + dump the ashes @ our local road cleaning ash pile. i am using a hand fired harman + nut coal but many other models can auto feed so it needs less care, but i am retired + mostly home or garage in the winter, garage 32-28 + well insulated uses a small wood stove THAT puts me in a TEE shirt in temps below 30 in short order!! check out coalpail.com + other sites for cheep heating!!

I had both. Jet style propane to knock down the chill and a kerosene wick heater to hold a reasonable temp in my drafty 1941 built 2 car garage with a tall roof. Little further south now with an attached garage. Just have the kero now.
S

I use a Mr Buddy heater with a 20lb tank. I leave the tank outside and bring it in when I'm using it--I figure, it's not going vent when I'm pulling gas from it and thus dropping its temperature. I got the 15' hose and when I'm done, I carry the tank outside and disconnect, so as to keep the propane smell outside. I've never tried to heat the garage up 30 degrees but having it close to where I am, fan on, seems to do something, certainly better than nothing. 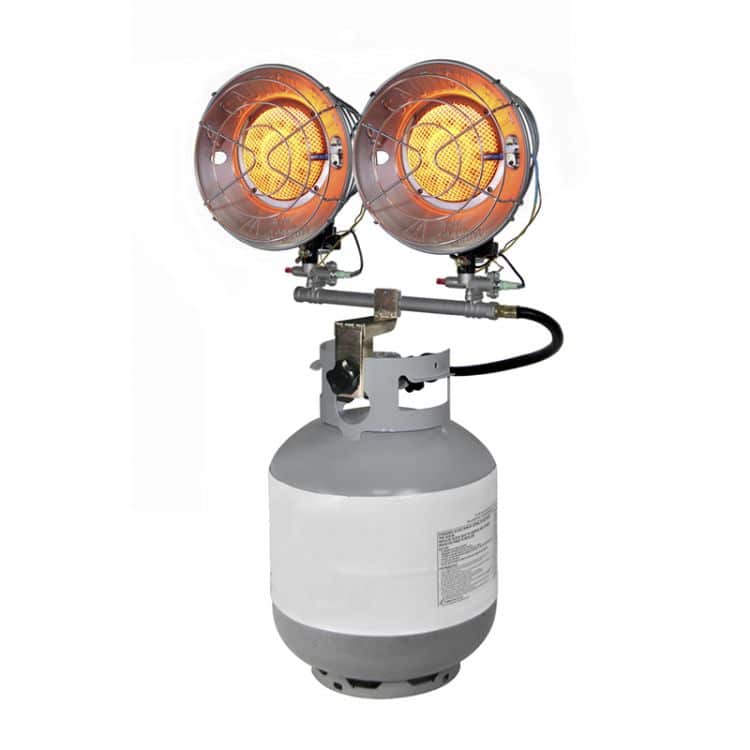 Using it in my uninsulated garage as I type this. 21F outside with this Nor‘easter bearing down on us. I have yet to crank it up to its highest setting as I am more than comfortable on its lowest.

I bought this and put a battery operated fan on top to direct the heat to me. What a world of difference.

I was working out in the garage this weekend. It's 18x26 apparently. There is a 2nd floor but it does have a pass through or two for heat.

It cost me about $20 (little over 5 gallons) to run both of my 23,800 BTU wick heaters. One of them I put on high and let it sit under a ceiling fan on low. That seems to do a good job of distributing the heat and keeping it from going up. The other was near the front door.

Saturday morning was 10F, this morning was 3F. I can't say it was too warm but it did get to 45 or 50 in there. Not bad given how cold it was out this morning and the garage not being insulated at all. I would start both heaters about 2 hours before heading out to the garage this weekend.

Long term I'd like to get either a kerosene mobile home furnace or set up some sort of gas heater. I do have natural gas plumbed to it. Just need to get time to get something and set it up.
Last edited: Jan 31, 2021
You must log in or register to reply here.

Just keep getting kicked when I'm down!
2 3