My friend has this fence along his house leaning quite a bit. It would be worse except the neighbor across braced it.

The two bad (weak) posts appear to be the one to the left of the end of the ivy in the middle of the pic, and the next one to the right just under the ivy out of view. My plan was to dig a hole along the existing posts, fill them with concrete and set new posts adjacent as a scab, then lag-bolt the old one to the new once cured. Do this twice for the two weak ones, and cut off the ivy (is it that much weight that I should?).

How deep to sink the new post? (I am thinking at least 12" or more - Seattle-ish so frost line is not an issue)
How tall? (I am thinking 4' above ground at least, but maybe more)
Should I encapsulate the concrete in a container (like a pail), or in the ground is ok?

I am thinking a container is overkill - my grandfather used to do it that way, but then again he drove steam trains so lots of things have changed since then. I am thinking gravel and concrete in the hole is ok. Also I should mention, there is a French drain service several houses/yards running just on the other side of the fence. The neighbor had it cleaned and repaired a few years ago, so drainage is good. It did have damage to it near the street junction for a while, and they may have been what caused this, now that I think of it...

As the sharp-eyed will notice, the fence height was raised later after initial construction, so that may have played a part, too. The "bad" posts do not appear to be rotted, just weakened from ground water and weight. I know to cut the tops of the new posts 45 and seal well to prevent water intrusion. The posts rot away underground then they break just below ground level. That is how wooden fences fail. It's probably cheaper and easier to rebuild the whole thing.

The pail method sounds like something that someone's granddad cooked up without any scientific basis. The conventional use of concrete is to fill the gap between the post and solid undisturbed soil. Digging out extra to place a pail would defeat that. It's not really necessary to use concrete at all if you can backfill with good compaction.

18" deep at least, use concrete, eliminate the ivy. It's likely going to look like a bandaid fix, is that OK? Could you carefully deconstruct that part of the fence and put in new posts where they are now?

This what I used on my leaning fence. 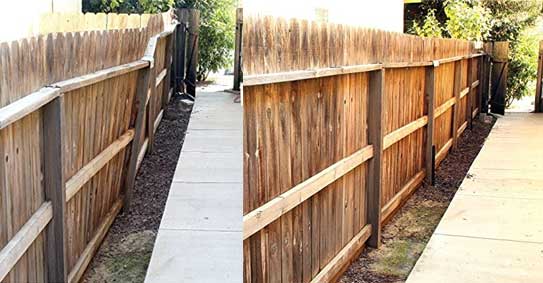 How to Cheaply and Easily Fix a Leaning Fence with a Postup Fence Post Repair Kit, and How it Compares to the Fix-a-Fence Repair Bracket...

put new fence posts in, as frost is not an issue go in the ground 24" and use stone dust instead of cement.

Around here most people are using 6x6 for posts the 4x4 just don't stand up.

I can not easily deconstruct the fence to replace the posts.

They aren't rotted or broken; just sagging from loosened soil and weight. I think it was the failure of the French drain that let the soil soften and lean.

How to Cheaply and Easily Fix a Leaning Fence with a Postup Fence Post Repair Kit, and How it Compares to the Fix-a-Fence Repair Bracket...

Well know that's interesting. If it can support this weight, it's at least cost-neutral and WAY easier/less labor. That's partly why I posted this thread (no pun intended!) as I thought that while I was sure I would get good advice, I hoped someone might show me a new trick. I'm going to look into that and show it to my friend tonight. Since the drainage issue is now fixed, this might work just fine.

Other input eagerly accepted; I appreciate how much good advice I get from users of this forum on almost any project.

I think that if you were to dig up those posts they would be done for. Wood just doesn’t last long around here. I’m 30 miles south of Seattle.

I like the recommendation of at least 18” deep and using the stone dust or compacting granite (there is another name for it). That allows water to drain on past the post where as concrete stops it where the wood and concrete meet and that is where the rot starts.

PimTac said:
I think that if you were to dig up those posts they would be done for. Wood just doesn’t last long around here. I’m 30 miles south of Seattle.
Click to expand...

I will do some digging and check before deciding. Good point. They did not seem to me on first casual inspection, and the drainfield failure seemd to explain it. But I'd better check carefully, you are right.

The responses have been very helpful, as always!

Seattle is getting about 5% of its annual average rainfall concentrated today and tomorrow (that'll be fun), so I'm not going to mess with it immediately.
W

I know its not an option with te OP's fence, But I've dug out the broken rotted fence post from solid cement, using a shop vac inorder to see better, then screwing long screws and/ or self tapping Eye bolts unto the unbroken part, and pulling it from the cement, perhaps with some more shop vac use, and perhaps a bumper jack iof really stubborn. New post might require a bit pf planing to fit in old cement hole. I paint the part which goes into the cement with Henrys roof patch tar.

I guess it can be similar amount of work as digging holes and mixing more cement, but those tasks I despise and avoid.

The homeowners were keen on my approach saving their grass and existing fence.

Never used cement, not with stone readily accessible everywhere in New England. Usually I can gather a bucket full in a few minutes. I use a 2x4 or a pick handle to ram them into the hole. Rammed dirt should work too..

I do this all the time. As stated start over. Some of the wood might be saveable, most not. I have reused well treated cedar pickets. Rails are usually shot as well.

Anyway I just pull up post concrete and pour in the unenlarged hole: 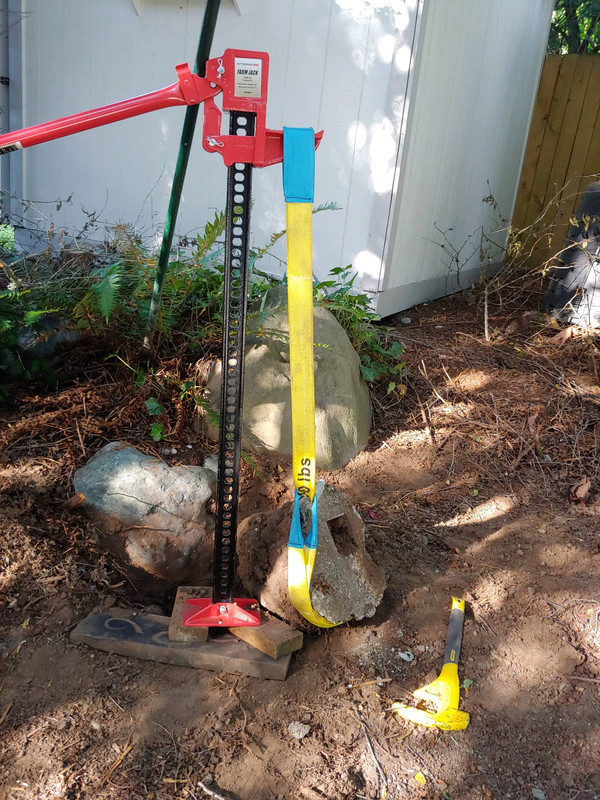 To solve the wood post rotting-out issue use galvanized steel posts instead of wood posts. For a 6' tall wood fence, sink them 18", and use pressure treated wood for the rails (I prefer to use 3 rails instead of 2). Doing the construction this way should get you at least 40 years out of the fence.
Last edited: Aug 14, 2021
You must log in or register to reply here.