I needed to start another thread as this issue is more specific. Engine is a 4200 Vortec, I had a few noises before I replaced my rod bearings...some piston slap, as well as worn rod bearings that one seemed to rap slightly after it warmed up. Most of the bearings measured .003" or slightly more and now are right about .0017"..max spec is .0025. That rap has seemed to have been resolved, but I did have a slight knock or hard tap from around the top of Cyl 4 heard through a stethoscope, before the rod bearing change. The light knock went away when I removed the spark from Cyl 4 as heard through the stethoscope when placed on the coil pack bolt. After running the engine for about 2 hours total since the new bearings, the engine is quieter, but I hear a light knock near the valve cover. I took the stethoscope again to #4 coil bolt and there is a somewhat sharp knock and again goes away when the coil is de-energized. What got my attention is that I could easily feel impact of the knock through the tip of the stethoscope. I placed my hand on the coil pack and I can feel whatever is making the knock sound. The other 5 coil packs don't have this sensation, #4 is very pronounced. My question is..could this be carbon build up in the chamber either causing contact with the piston and/or increased compression causing a more violent burn? The fact it goes away when I pull the coil lead makes me think it's a nasty slap and just traveling through the head into the plug well. Was also thinking it could be a wrist pin but why do I feel it in the coil pack? If I place the stethoscope on the block near the top of the cylinder the knock is barely audible, it's significantly more pronounced through the single coil pack bolt. Also very audible when probing anywhere on the coil pack. 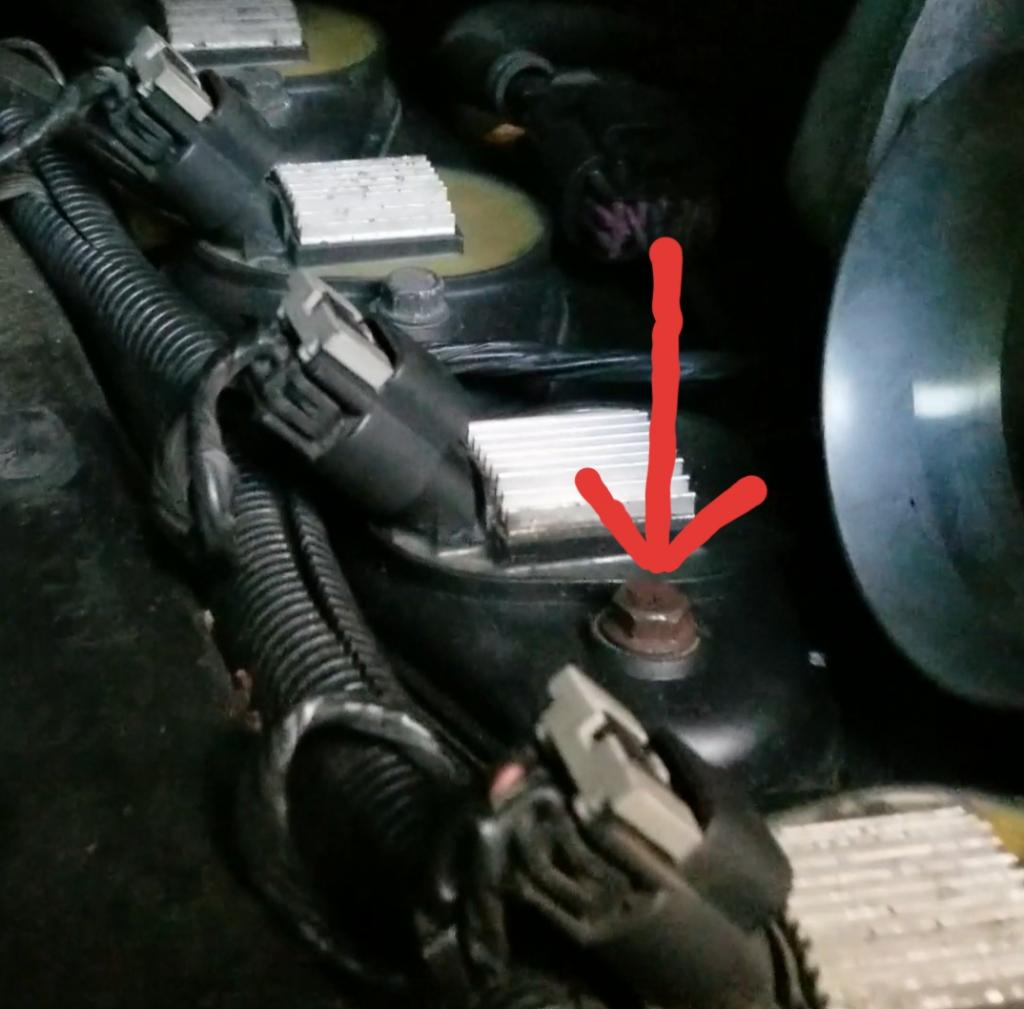 I have a can of B12, could I soak the piston at TDC and fill the chamber up into the spark plug hole and let it all soak? I tried another water injection but no difference. I have some Amsoil Pi in the tank and after 3/4 tank before the rod bearing change and some idling...when warm it seems ever so slightly quieter but that hard tap at the coil bolt is there through the stethoscope. Anything is possible, all input appreciated.
S

You can try a MMO Marvel Mystery Oil soak, pour it in to a warm cylinder and let it sit overnight.

My guess is that it's a mechanical issue, such as a loose piston pin or piston to cylinder fit, or even a valve train issue. Any interference knock will generally get rapidly worse and louder with increasing RPM.
Last edited: May 26, 2019
B

I would think that carbon buildup would be worse under load, like going uphill without kicking down into a lower gear & unlocking the TCC. How many miles, how was the maintenance? Other than a little experience with my brother's GF's Trail Blazer 4.2 (which is a noisy beast @ 130K), haven't dealt with these enough, although GM is known for sloppy piston clearances.
O

TrailBlazer? My family's has had piston slap upon startup since it was new.
I

I'll try to answer all the questions. Envoy, 289K miles. Has had.Mobil 1 for the first 200K miles, had a lash adjuster start to go bad around that time then I tried some other oils like Rotella, PYB, but pretty much 4-5K OCI. Piston.slap wasn't really an issue when new, may have lasted a few seconds but wasn't very loud if audible at all. I would always let the motor run for a few minutes before driving when it was first started.....always. I could count on one hand that I started it and drove away within the first min in 17 years of owning it. I haven't driven it since the rod bearings were replaced, but I could hear the rap inside the vehicle and was more pronounced under load...this was before I changed the bearings but I can slightly hear it inside at idle. Using the stethoscope, the knock increases with RPM, and is very consistent which also leads me to a mechanical issue as well. Perhaps an interference at the ring land then the piston cants to one side? The noise seemed slightly more intense through the stethoscope after the new rod bearings were installed....didn't think the added .0015 of travel would make a difference but anything is possible. There is mild scuffing on the cylinder wall so piston slap is obviously an issue. I've seen other 4.2's with similiar marks and then pistons look worse than the cylinder walls which makes sense. Something else, I used an oil catch can at around 250K. Worked fine, captured about 4oz per OCI. Then it captured less and less, thought it was because of the T6 I used for about 20K miles. Turns out there was a fine mesh filter in the lid of the can I never saw, became stopped up and restricted the PCV flow. There was basically no, or almost zero vacuum through the valve cover and I believe the restriction was at the crankcase vacuum port. I cleaned it up and is now working, my guess is that's where the carbon came from. I may also have some caked in the ring packs. I want to speculate I drove for about 8K miles with it plugged up. Current valvetrain pic. 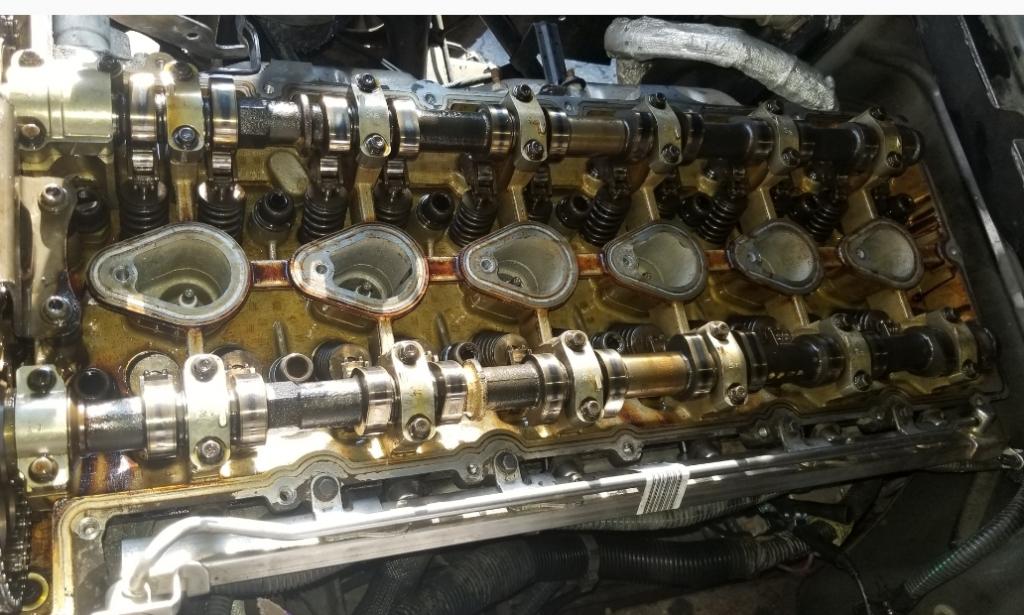 This is #5,.but #4 looked almost identical. Thrust side of bore. This is Cyl #2, and has the worst scuffing. I can barely hear any knock when warm through the stethoscope at the coil pack bolt.
Last edited: May 26, 2019
C

Originally Posted by CT8
289,000 miles? Complete rebuild time.
I do accept that possibility. Needless to say I'm hanging my hopes on something that's not a severe issue. For sake of discussion, I took these compression tests this morning on #4, dry and wet. #4 Dry test #4 Wet test.
V

Could've stuffed a feeler gauge in there,between piston & cylinder wall to get an idea of the true clearance. Not a big deal, eventually a skirt may break away & fall into the pan, just another sign an engine swap is approaching. If the noise is at camshaft speed, it's probably piston slap.
S

looks pretty good. Why not just drive it.

Did you check sleeve to see if it moved. Seen new ones as well as older cyl. Sleeve moved.

At this point I would just run it. Lots of Subaru engines running around that sound like they have a rod knock, its piston slap and many go another 100K easy. I have a EJ22 here that has a very light knocking sound that sounds like a rod, its been doing it for the last 10 years and never got worse. When it was first noticeable I figured I would end up splitting the cases and rebuilding it anyway so I said frig it run it till its done, it never happened.

Originally Posted by Trav
At this point I would just run it. Lots of Subaru engines running around that sound like they have a rod knock, its piston slap and many go another 100K easy. I have a EJ22 here that has a very light knocking sound that sounds like a rod, its been doing it for the last 10 years and never got worse. When it was first noticeable I figured I would end up splitting the cases and rebuilding it anyway so I said frig it run it till its done, it never happened.
My thoughts too. If the engine is done, maybe get the engine/trans from a wreck and swap it? A lot of work, though. Oh well, just thinking out loud .
T

Originally Posted by tiger862
Did you check sleeve to see if it moved. Seen new ones as well as older cyl. Sleeve moved.
You must be a diesel guy - This thing doesn't have sleeves, just parent bores like all autos do.
I

Originally Posted by The_Eric
Originally Posted by tiger862
Did you check sleeve to see if it moved. Seen new ones as well as older cyl. Sleeve moved.
This thing doesn't have sleeves, just parent bores like all autos do.
Actually the Atlas engines do use replaceable sleeves. I did check the sleeves and they were all in place.
Originally Posted by sdowney717
looks pretty good. Why not just drive it.
The plan is to drive it, likely going to keep running it until something major sounds like it's going to happen. Honestly I could barely hear the tap or knock from the front of the motor. Wasn't until I put the stethoscope on the coil pack bolt that I was surprised of the intensity.
Originally Posted by vw7674
. If the noise is at camshaft speed, it's probably piston slap.
I agree, and it will likely not be a huge issue for awhile..hard to say. I've never heard carbon knock so I wasn't sure how close it resembled a slap...if at all.

The Cadillac N* was notorious for carbon knock, it sounds very similar to a rod. It tends to be more pronounced with a cold engine.

Originally Posted by The_Eric
Originally Posted by tiger862
Did you check sleeve to see if it moved. Seen new ones as well as older cyl. Sleeve moved.
You must be a diesel guy - This thing doesn't have sleeves, just parent bores like all autos do.
You are incorrect. GM had a bulletin out that the sleeves were not in correctly hitting the head with total failure. Takes many special tools to work on them. https://www.nc4x4.com/forum/threads...hread-ll8-l52-llr-lk5-llv-engines.39853/
Last edited: May 27, 2019
You must log in or register to reply here.

Wrenching in The Desert; DOT 5.1 Edition