Hello, Is it normal for a 90 degree V6, in particular a 4.3L v6 from a chevy truck to have a slight shake at idle? Ive owned my truck since new, and want to think that when it was very new (currently 56k), it was absolutely smooth. For the last number of years though, it has a slight shake it idle, almost like it is missing randomly, and nothing helps - no CELs either - for all I know it was alwas like this - but I feel that it wasnt... Runs strong, well and gives decent gas mileage. I just feel the engine shake at hot idle. I notice that the oil pressure gauge fluctuates, it seems, in stride with the shake, but idle speed stays rock steady at just over 500. I read that the Idle air control can get dirty and cause a "rough" idle. My idle isnt rough, the engine just gives a slight shake. Well, I did the IAC. I am also going to clean the EGR, and have an EGR gasket on order, but the results from the IAC is not promising. Again, no codes, ever. I have a scangauge and scan with the engine on - nothing. Here is what I did... pulled it out with a Torx 20 bit used: 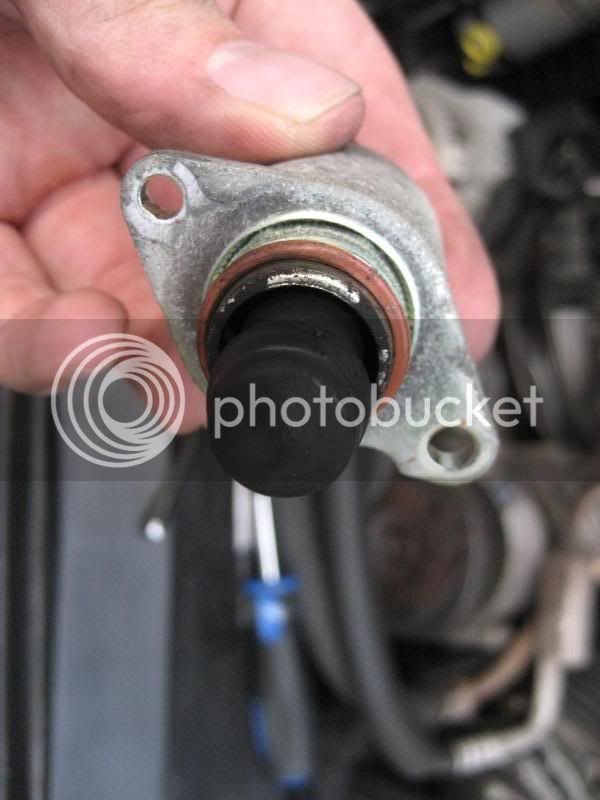 The TB was quite clean though. Really not necessary to clean, even under the flap.

I cleaned it with CRC teflon safe throttle body cleaner.

I saw that the hole that the IAC valve sits in was pretty dirty black inside. I tried a variety of things to clean it, including spraying cleaner in there wiping paper and my fingers in the hole, and using a rag soaked in B12 chemtool.

And then put it back together...

I restarted it, and it took a bit of pedal, as would be expected, but then idled fine. I let it idle a while, and noticed that it still shook. I looked at the scangauge, and wih the O2 in closed loop mode, water at temp, idling with AC and fan on to simulate a slight load, ignition was at 20 degrees at idle, 35 at 2500 rpm in neutral. I cant take it out tonight to get more data of ignition advance, not sure if it helps. I then tried removing spark plug wires. I had my wife start the truck with a different one disconnected each time. It started perfectly, and there was a definite roughness due to misfire, but it was a very similar shake to what happens when it just shakes normally at idle. I have magnecor 8mm wires that are more or less new (within the year). Spark plugs were done less than 20k ago, to try to attack the idle shake (and did not help). I put the magnecor wires as an attempt to fix the shake too - no change comapred to OE wires. Ive replaced the cap and rotor twice since new, just because of years and slight erosion - since I had it apart, I just replaced with OE parts. Ill attack the EGR within the week, after I get the gasket. Anyone think it will actually help? Is a slight shake at idle jus the nature of a 90 degree V6? The engine mounts are solid, ive tried shaking them with no motion, which I should see if themounts were shot. Any thoughts???
Last edited: Jun 8, 2009
4

Timing at 20deg at idle is a bit higher than I see with my cars, whats the most advance you see? I get up to 45 deg at with light throttle on the highway. Also isn't the 4.3 just 6 cyl of the 90deg V8? Making it not quite perfectly balanced.

I hope you continue to update this topic, especially if you find a cure for the "idle shake" as I'm having the same issue with mine. I also bought new (10yrs ago) and don't remember it always having the shake/bump/bounce/skip or whatever you want to call it at idle. I've cleaned the TB and have never had miss-fire codes, but have never touched the EGR. Would dirty injectors be a possible cause? I assume not, because I have smooth throttle throughtout all RPM's, good luck and hope you find a prescription for this.

The Central Sequential Multiport Fuel Injection system used on many Vortec engines is very problematic. They are very prone to carboning up and rough running. I would recommend running some combustion chamber cleaner down the intake and have the injectors power flushed with a cleaner that specifically dissolves carbon. Change the fuel filter too. The best option is to replace the whole injector body with the updated style that completely does away with the poppet valves. Dumb design IMHO...

Run a bottle of Amsoil PI through the system, I bet you won't have the problem after that. It fixed a clogged injector in my Neon and the car now runs like gold.

Does it smooth out if you add 100 RPM? (EG like what you get when cold) Could be a harmonic vibration and it could still be your motor mounts.

yes it does smooth at 100 rpm (or so) up, no load. I wouldnt doubt that it is a harmonic that builds up, as I notice that if I blip the throttle, drive and come to a stop, etc., it idles nice and smooth, then starts to buid up to a regular, periodic (it seems) shake. Shaking the engine any way I can does not indicate any motion, what is the best way to check the mounts? Thanks!

Originally Posted By: StevieC
Run a bottle of Amsoil PI through the system, I bet you won't have the problem after that. It fixed a clogged injector in my Neon and the car now runs like gold.

Tried that, as the system in these trucks uses a single injector and six poppet valves to meter the fuel into each cylinder in the correct sequence. They offer a conversion kit to replace the poppet valves with injectors, as some folks build up carbon and clog the valves. Ive run PI in there, on a light dose of gasoline to maximize concentration - no luck. The other typical issues associated with bad/dirty poppets and the need to clean or replace with the upgraded injectors have some similarity, but for the most part are not the same set. I wish it was that easy... I think really it is because this is a 90 degree v6, and Im used to small 4-cylinder engines...
W

Originally Posted By: wapacz
my 5 liter v8 has a little bit when the ac is on.
If it is in a Mustang, they are not known for having a smooth idle anyways. The stock cam, by OEM standards, was somewhat aggressive.

Just seeing all the carbon on your IAC valve tells the story - you've got carbon built up big time. You've cleaned all you can get to, but you'll need to run some Seafoam or GM Top engine cleaner (forgot the new name) thru it - that worked with a 1997 Olds Bravada I had which is similiar to your truck. Also, cleaning that EGR passage way will help, too. Have you changed the PCV valve and checked for any vac leaks? I'll bet the vac hose going to the vac ball is cracked near the nipple...this is common.

The 3 Chevy 1500 p/u's my family had since new all shook at idle (1990, 1994 and 1998 model years). They were always smooth otherwise. Just idled like the engine was bolted solid to the frame. These engines have large balance shafts to deal with the shakes IIRC. Joel
C

The last time I had a slight shake at idle, it was more like a slight random misfire in a 4 cylinder motor. Listening at the exhaust pipe, a hint of misfire can be detected. The motor does rock slightly on its mounts. Tried all sorts of methods to trace the problem, from tracing vacuum leaks, to new plugs and cables to no avail. Finally, found the problem. The valves were "slightly" too tight when warm/hot. In some motors, the valve clearances tighten up as it warms. When the valves don't quite seat properly, it upsets the idle. I readjusted the valve clearances back to spec, and the idle was good again. Might not be applicable if you have hydraulic lash adjustment. Just my 2 cents.
W

Originally Posted By: OVERK1LL
Originally Posted By: wapacz
my 5 liter v8 has a little bit when the ac is on.
If it is in a Mustang, they are not known for having a smooth idle anyways. The stock cam, by OEM standards, was somewhat aggressive.
guess I should have prefaced it with that it is the gm 5 liter. in my 95 gmc sierra to be exact. It only ever has a very slight shake when idling with the ac.
S

Does it have a MAF? Try cleaning that. If it has a MAP, try disconnecting the electrical connector from it. I was having issues and unplugging it smoothed out the idle. Also watch the o2 sensor readings, make sure they look right. A lazy o2 sensor can cause issues like this.