What is Oil Analysis?

The first use of used oil analysis dates back to the early 1940s by the railway companies in the Western United States. Prompted by the purchase of a fleet of new locomotives, technicians used simple spectrographic equipment and physical tests to monitor locomotive engines. As steam locomotives gave yield to diesel locomotives, oil analysis practices by railways caught on. By the 1980s oil analysis formed the basis of Condition Based Maintenance in most railways in North America.

Owing to the success of oil analysis in the railways, the American Navy used spectrometric techniques to monitor jet engines on their aircraft in the mid 1950s. Around this time Rolls-Royce was also experimenting with oil analysis for their jet turbines. Oil analysis began to spread and programs were developed by the American Army and Air Force throughout the 1950s and early 1960s. Then commercial oil analysis laboratories first appeared on the scene in the early 1960s.

A detailed analysis of a sample of engine, transmission and hydraulic oils is a valuable preventive maintenance tool . In many cases it enables identification of potential problems before a major repair is necessary, has the potential to reduce the frequencies of oil changes, and increases the resale value of used equipment.

What is oil analysis?

Oil analysis works like this. Oil that has been inside any moving mechanical apparatus for a period of time reflects the exact condition of that assembly. Oil is in contact with engine or mechanical components as wear metallic trace particles enter the oil. These particles are so small they remain in suspension. Many products of the combustion process also will become trapped in the circulating oil. The oil becomes a working history of the machine.

Particles caused by normal wear and operation will mix with the oil. Any externally caused contamination also enters the oil. By identifying and measuring these impurities, you get an indication of the rate of wear and of any excessive contamination. An oil analysis also will suggest methods to reduce accelerated wear and contamination.

The typical oil analysis tests for the presence of a number of different materials to determine sources of wear, find dirt and other contamination, and even check for the use of appropriate lubricants.

Some wear is normal, but abnormal levels of a particular material can give an early warning of impending problems and possibly prevent a major breakdown.

Early detection with oil analysis can allow for corrective action such as repairing an air intake leak before major damage occurs. Probably one of the major advantages of an oil analysis program is being able to anticipate problems and schedule repair work to avoid downtime during a critical time of use.

One purpose of oil analysis is to provide a means of predicting possible impending failure without dismantling the equipment. A person can “look inside” an engine, transmission or hydraulic systems without taking it apart.

A complete record of oil analysis may be a great tool for selling a used piece of equipment. It shows the potential buyers how the equipment has been maintained and how adjustments were made during its life. The history is a good indicator of potential future repairs and overhaul requirements.

One potential use of oil analysis is in the evaluation of used equipment being considered for purchase. Without knowing the amount of operation of the oil being analyzed, this test should be considered conclusive only if it indicates a problem. A good report could result from either no problems or a short length of service of the oil.

Some of the physical properties tested for and usually included in analysis of an oil sample are:

It is important to get an oil sample that is representative of all of the oil in the machine. Remember, your analysis will be based only on the sample that you send in for analysis. Always have the oil hot and thoroughly mixed before sampling. Handle hot drained oil with care — it could cause serious burns.

The easiest way to obtain a sample may be when the oil is being drained for an oil change. Sampling at this time usually involves letting some of the oil drain and then catching a sample in an appropriate container.

Samples also can be obtained without draining oil by suctioning out through plastic tubing routed down into the oil reservoir.

In any case, it is important to have an appropriate container and follow sampling directions thoroughly. Remember, many of the tests are for measuring materials on a parts per million basis, so safe, effective sampling is needed.

Cost of oil analysis will vary according to the laboratory and extent of the analysis. Typical charges are $10 to $30 per analysis. The expense easily can be justified if it alerts the owner of a major problem that can be corrected and will help prevent downtime when the machine is needed.

The reasonable cost and convenience of oil analysis for use makes it another management tool that should be considered by anyone wanting to do preventive maintenance. 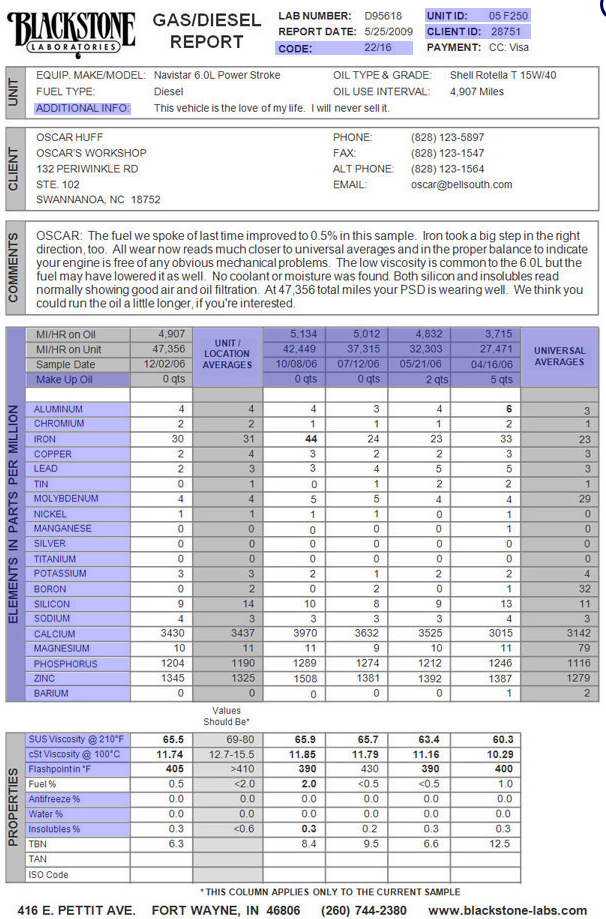 Results of the laboratory analysis are typically returned in two to seven days after the lab receives the sample. Results are returned to the owner for review. The laboratory may note when the analysis shows an abnormal condition and issue a caution or recommendation accordingly.

Most maintenance experts realize the oil change intervals for both engines and transmissions are decided by the “average need.” No two pieces of equipment have the same preventive maintenance needs. Each machine has different imperfections and is used under different conditions. Operators doing smaller or lighter jobs can cause different conditions on engines and transmission wear than those that occur during more extended use. When using oil analysis to determine maintenance intervals, there is little guesswork. Records show that some equipment can safely run two or three times longer than recommended intervals. The oil analysis may show that you are changing the oil more often than necessary — or not often enough.

By eliminating too frequent oil changes, you reduce the cost for oil and servicing and also reduce the amount of used oil to deal with. This is an important pollution prevention method — reducing the source!

Oil sample analysis saves you repair and maintenance dollars, has the potential to reduce used oil and increases resale value of equipment.

These are average numbers used but depending on your type of equipment may be higher or lower. Most reports have charts listed on the back to explain the severity of that component in ppm.