Just something to try next time it happens, take key out of ignition wait 10 minutes then try again.My mother had one do the same thing.It was a security system issue that is in computer program.At the time I could not find a fix and GM did not issue a recall.Eventually traded the car because of it.
J

In the past I heard about the GM security problem, but there were several posts that said if you install a remote start on the vehicle that the remote start has something that defeats the security system and after that it never is a problem. We have a remote start on our vehicle. From what I understand from the past posts about this is that the remote start defeat of the security system works even with the key start. I did not think of trying to use the remote start. I left the vehicle at the local shop that specializes in alternators / starters / batteries and will have them check the battery and everything they can think of that is related to it not starting tomorrow. If it does not start again I will try the remote start. It that does not work I will take the key out, wait 10 minutes, and try again.
Last edited: Nov 3, 2019

You have to take the Battery Cable Ends completely apart to clean them correctly!!! After you clean the battery cable ends......And it happens again.....Remove the underhood fusebox cover that houses the Crank Relay. *There will be 4 terminals exposed once the Crank Relay is removed. *Jump the 2 terminals I drew on the picture below together. *If the engine now cranks....This eliminates the Starter/Solenoid & Bad connections at the battery. 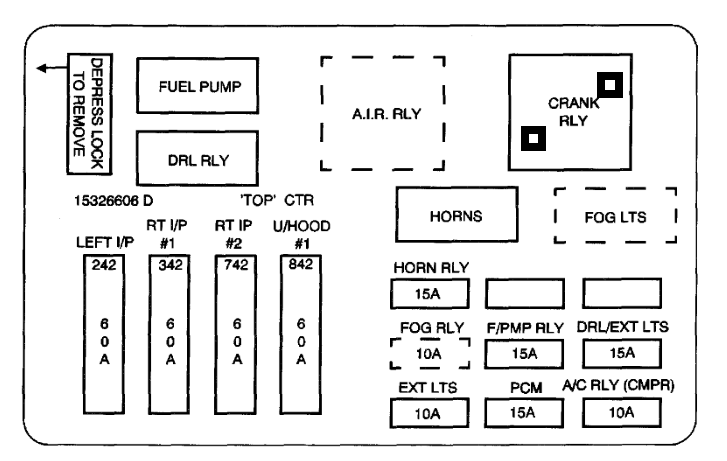 A follow up on what was found, the battery failed when load tested. Ed's generator sold me the battery and that is where I dropped it off yesterday. They replaced the battery and there is no cost to me for doing it.
You must log in or register to reply here.

N
Slow crank, but fired up
2