Pics of my PACNW vacation

Starting July 17, my better half and I embarked on a road of epic (at least by our standards) road trip to the Pacific Northwest. We had her youngest son house sitting. Before we had even left, there was trouble! The night before, we started to plumb in a water line right out of the well pit for her son to use a sprinkler, so he could water the garden. The install went well up until we tried it out... Turned it on, only to watch the pressure drop straight to 0. Rut roh... Some trouble shooting showed me that there was no power on one leg of the 220v in the well pit, but good power at the breaker panel- so that meant that I had lost a leg of voltage somewhere underground. Time for a flying trip to the farm store! Picked up a roll of direct burial wire and unrolled it right onto the ground, then wired it in to the well and the breaker box. Powered it all up and SUCCESS! For the first leg of the trip, we left central Iowa and drove clear to Colorado Springs. What a drive! We took I80 halfway through Nebraska, then headed south into Kansas. Just as we get into Colorado, her son calls- he is having trouble giving my cat a pill... She's having none of it. We call in reinforcements- our long time friend up the road and an old hand at administering meds to critters... No dice. Great! Well the boy managed to figure something out because that's pretty much the last we heard from him on that topic... Good deal as I didn't want to have to worry about my cat while on vacation. Anyway- we arrived in Springs and get checked into out host's place (we stayed Air B and B). Wonderful couple and plenty helpful! View from their drive: [img:center] 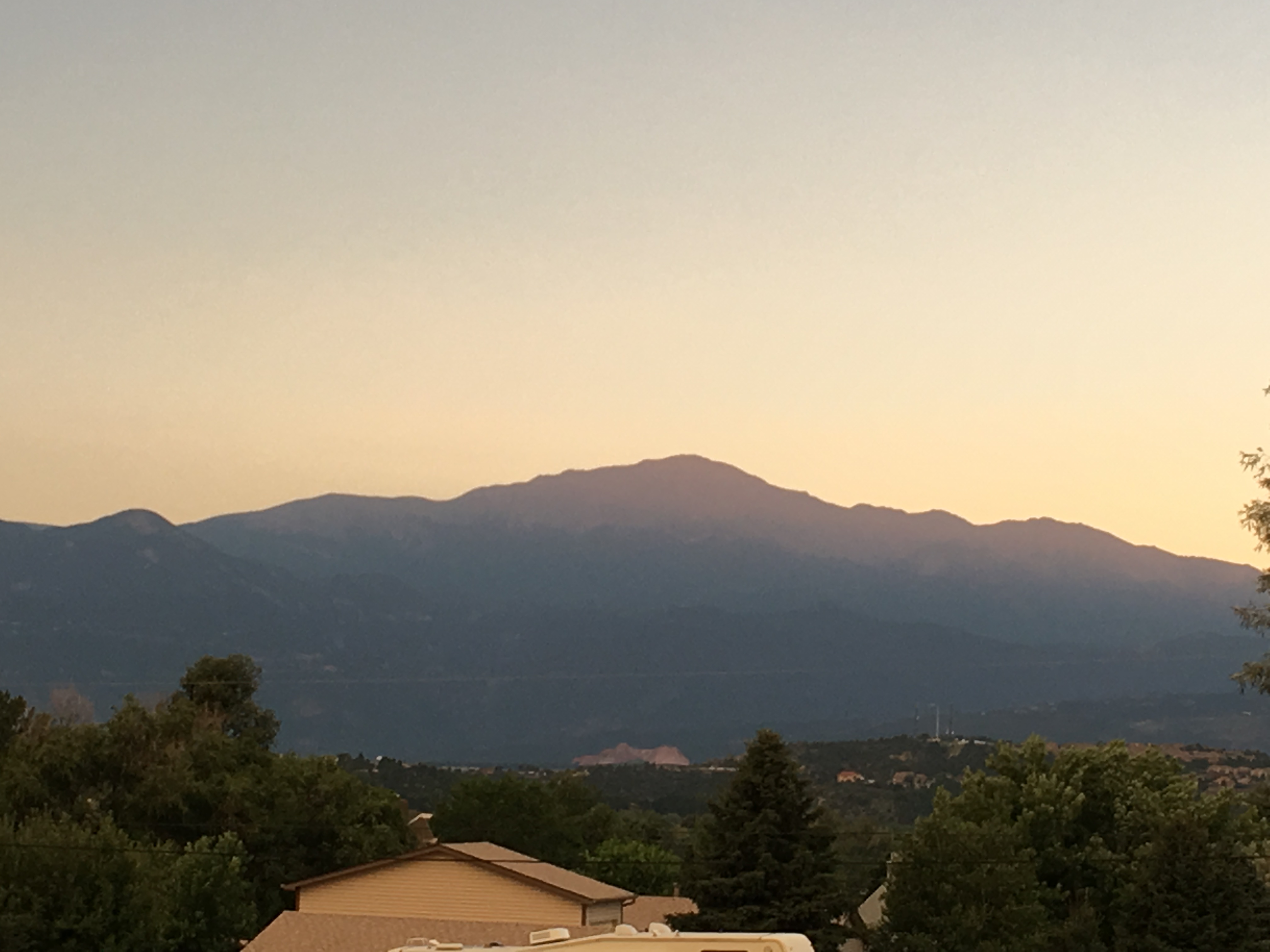 [/img] The next day we went to the Garden of the Gods. What a neat place! Walked around the central garden area, then went hiking in the hills that surround it. Very cool.. Got caught in a rain shower on the way back to our vehicle and got pretty thoroughly soaked... oh well. Since I was only shooting with a cell phone, I wasn't able to get enough wide angle type photos. Many ended up being a photo of part of a rock formation. Here are some that I was able to get: 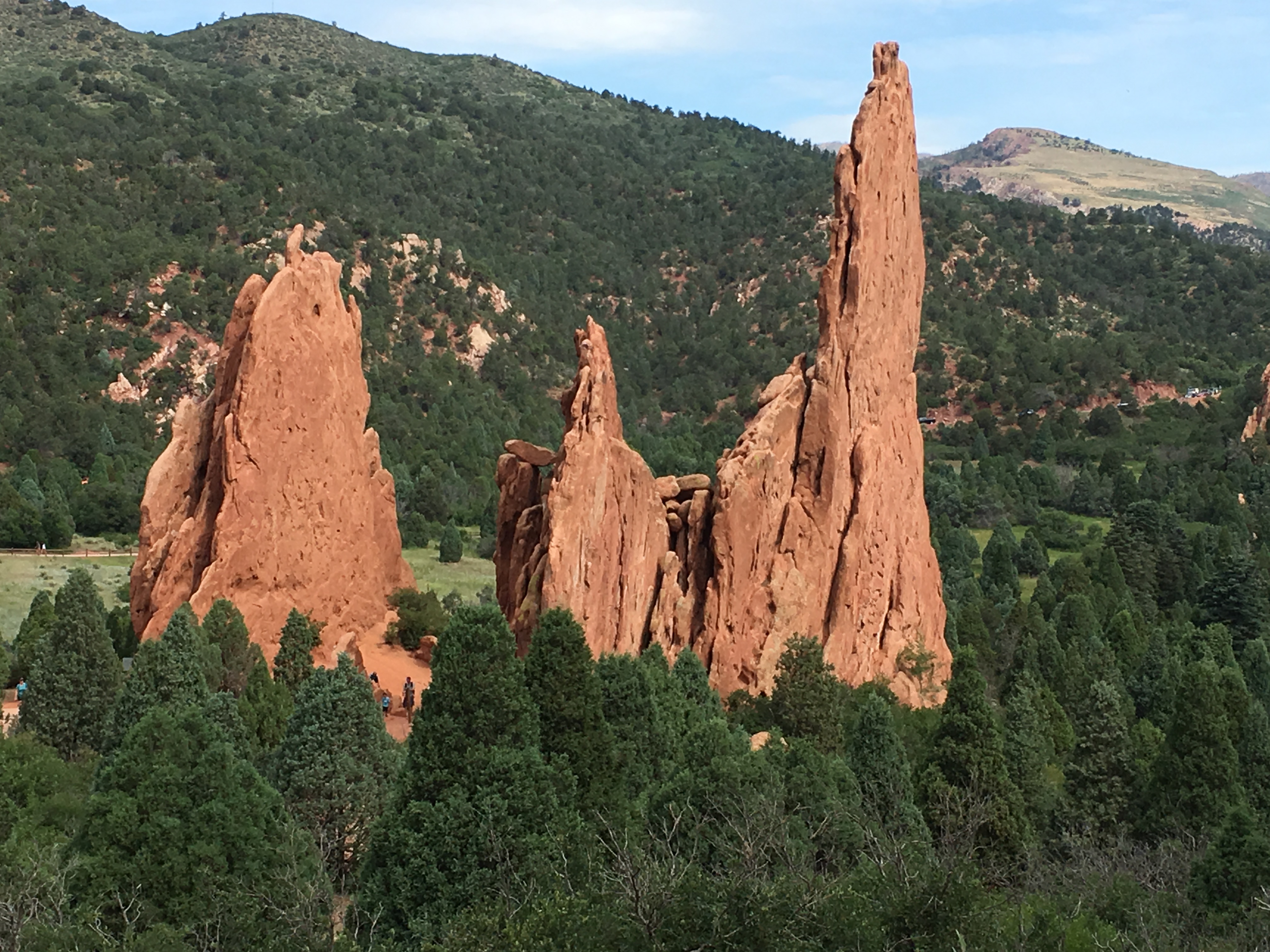 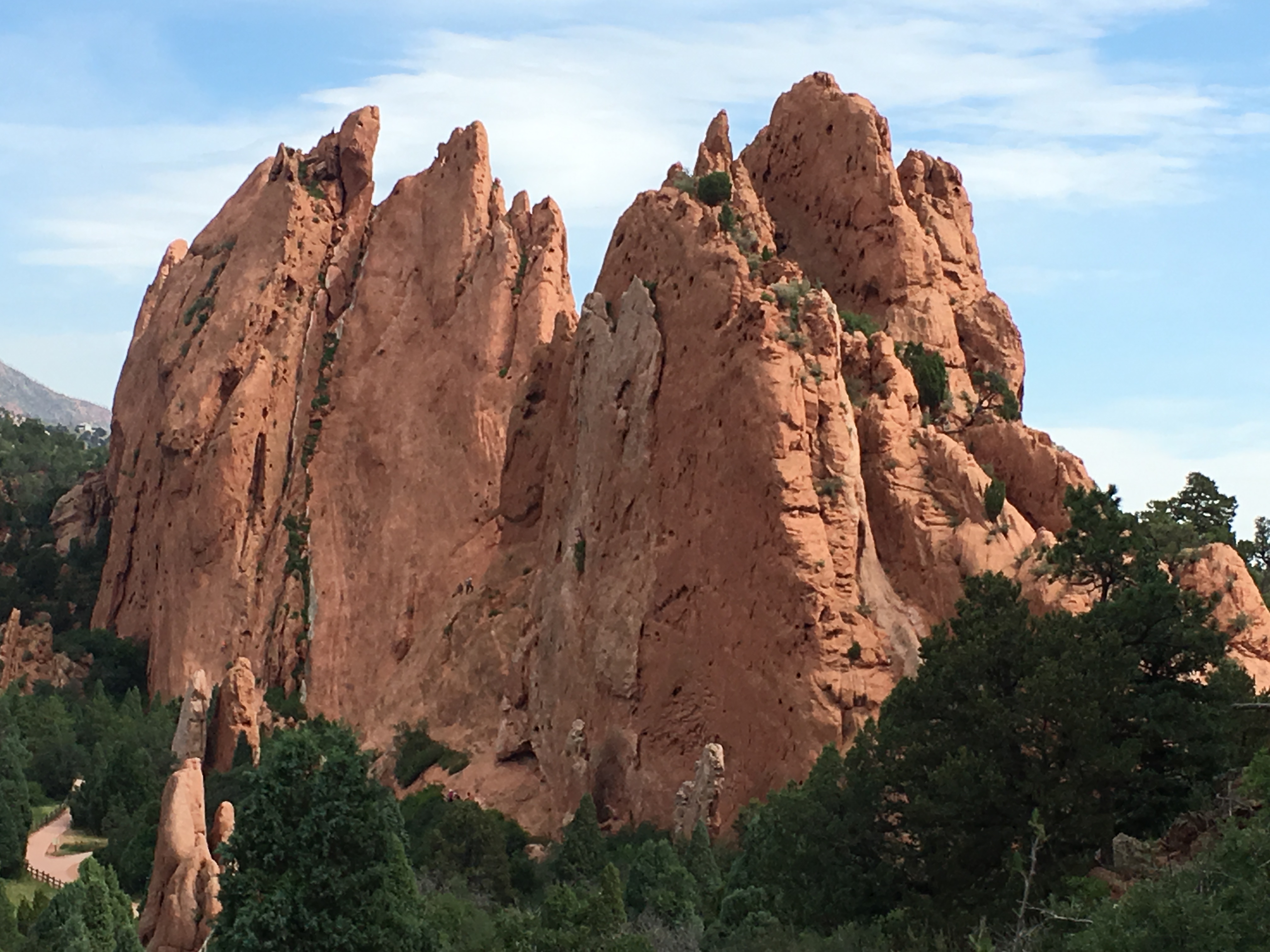 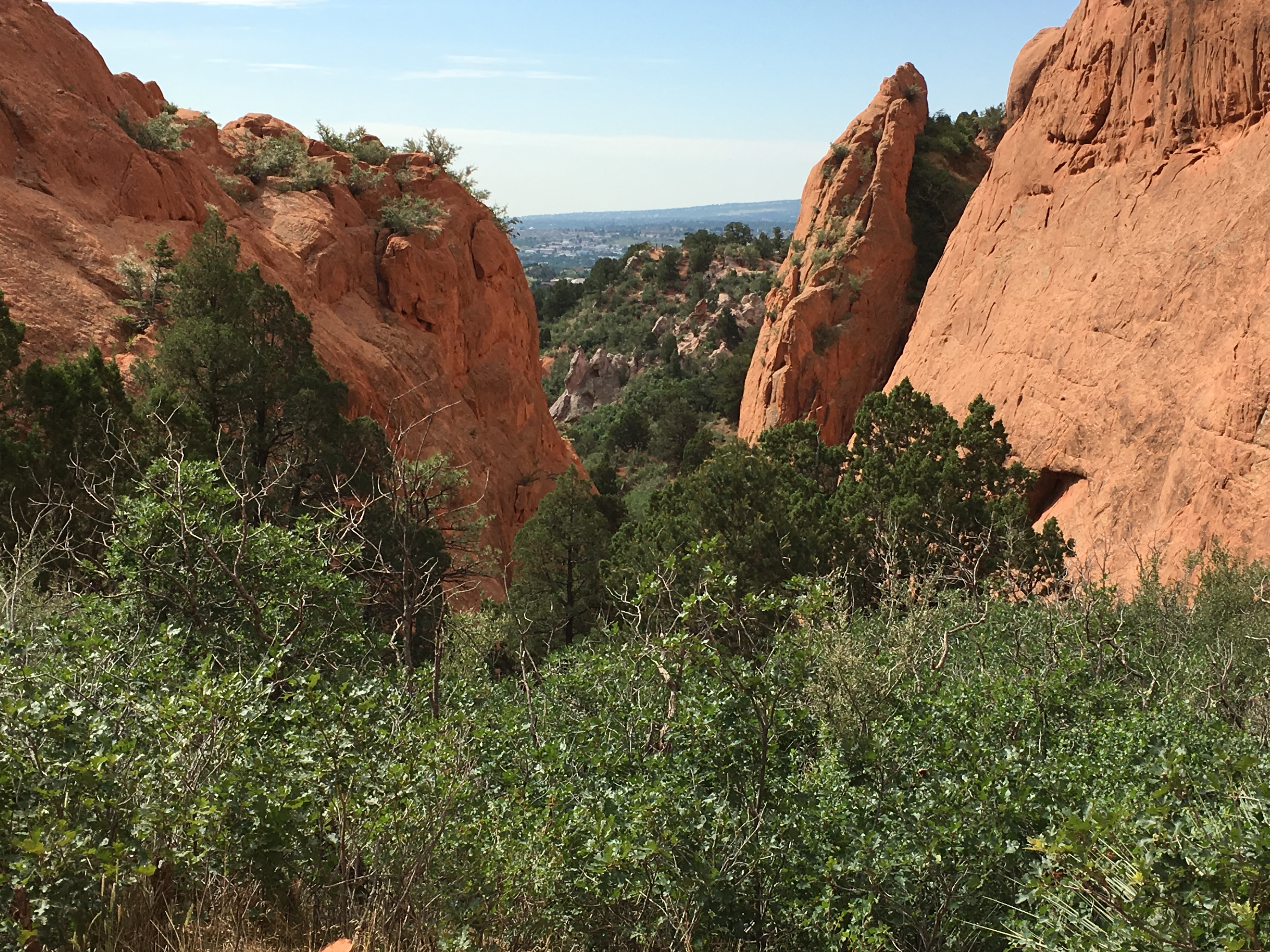 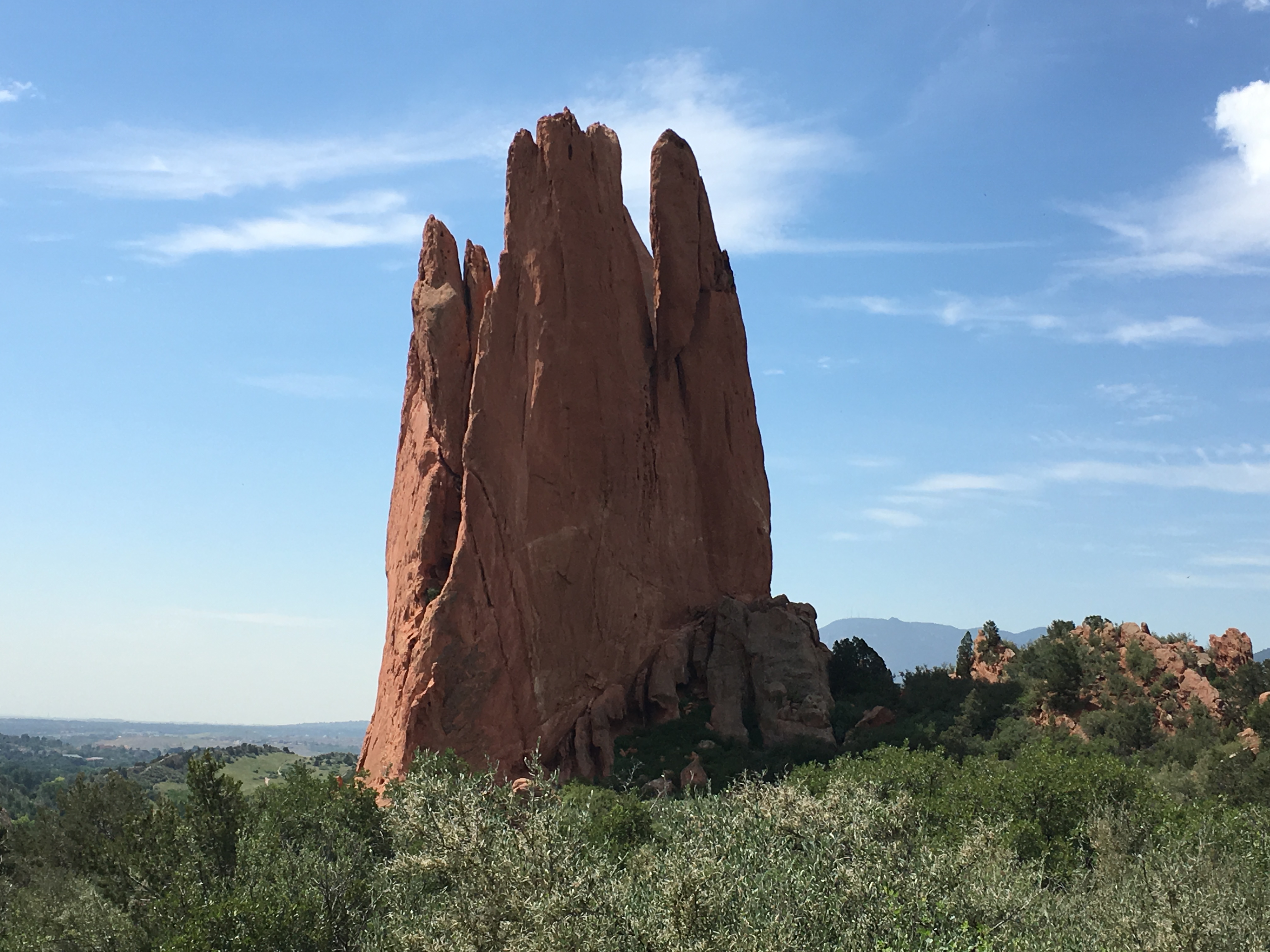 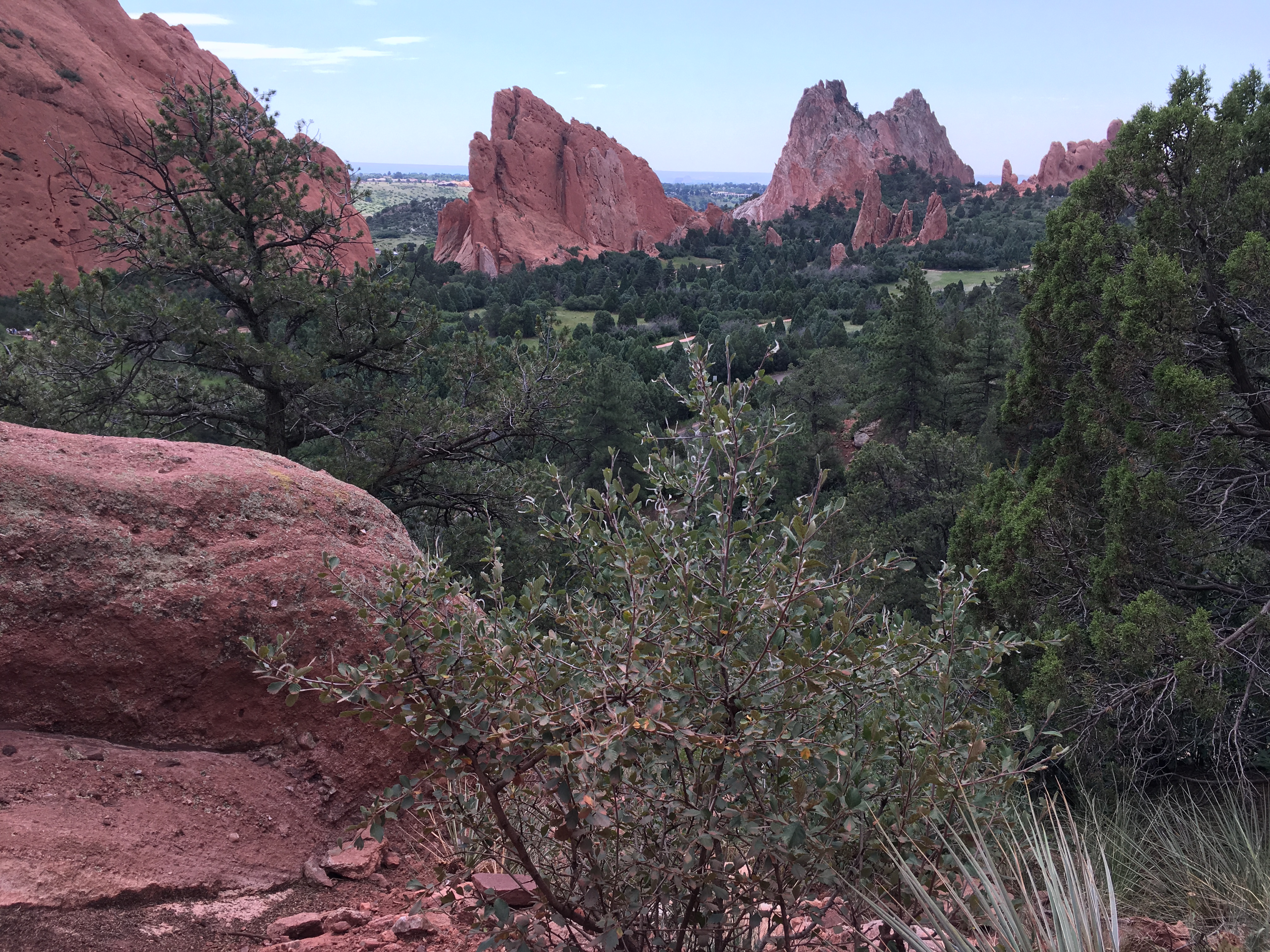 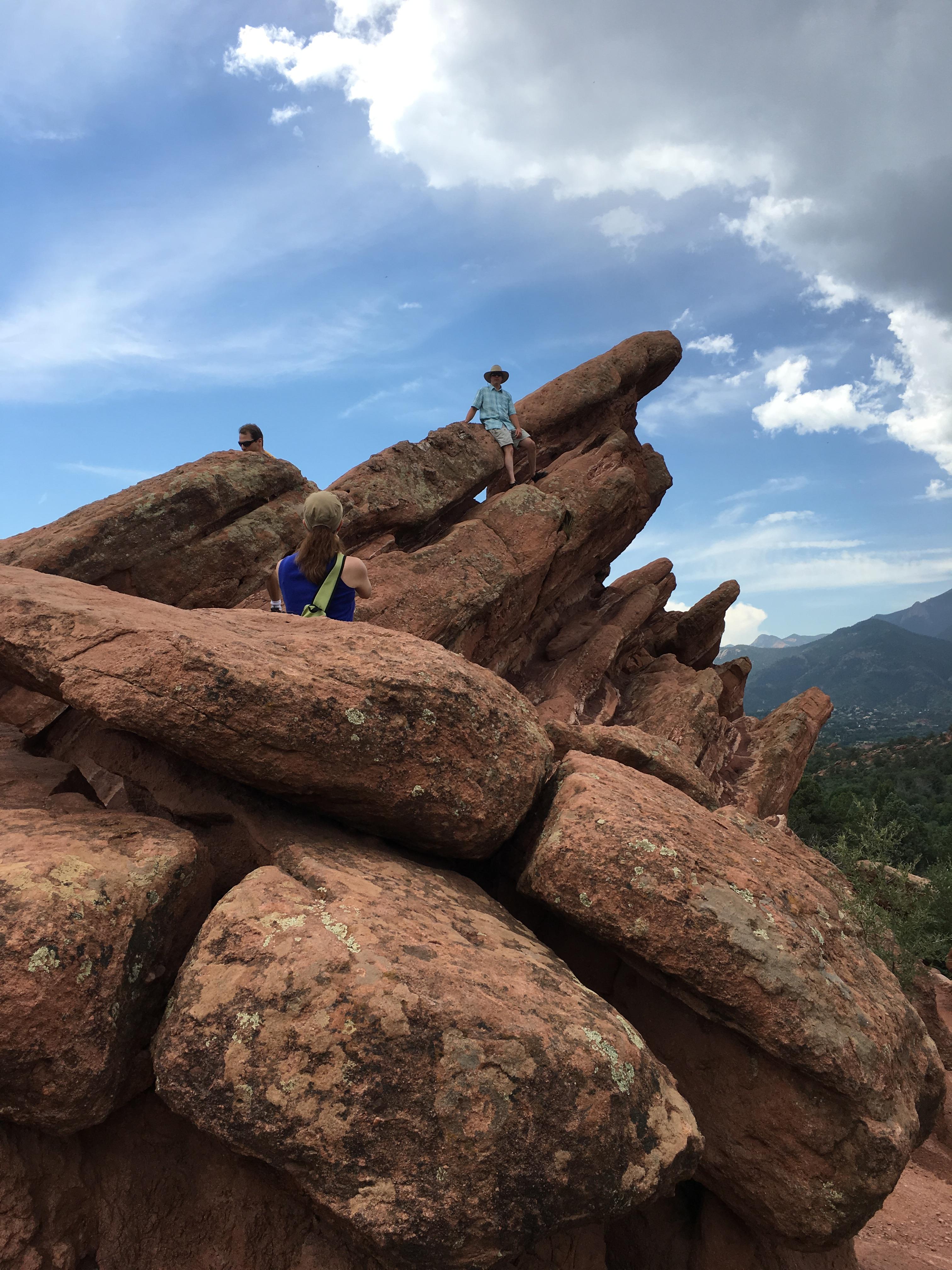 [/img] And a photo of the wiff and I- a familly wanted me to take a photo of them, so I asked the gal to do the same for us (pre rainstorm): 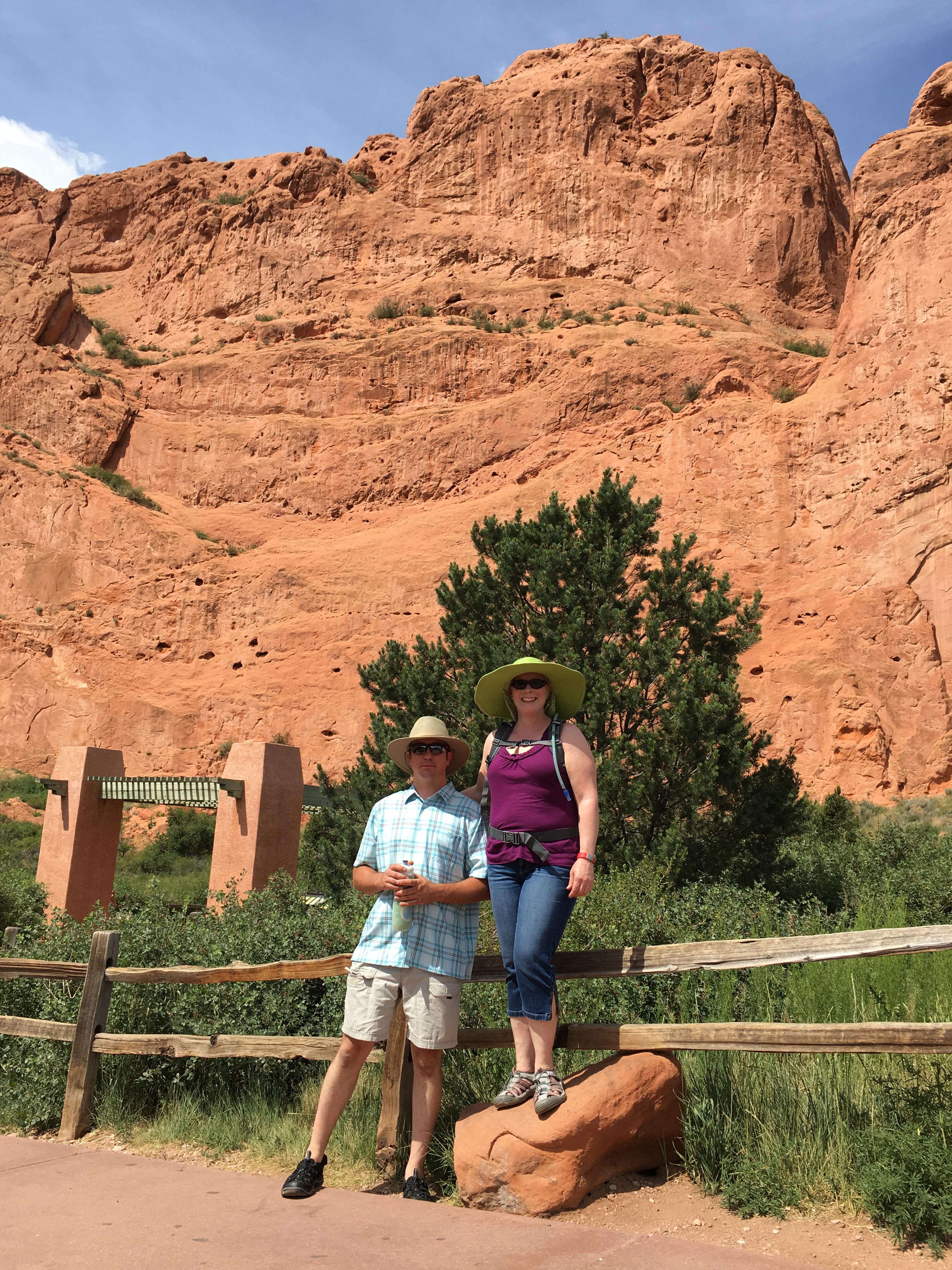 On to Manitou Springs and Pike's Peak. We tried to reserve a couple of seats on the cog train, but it was full up, so we had to drive up. What a place and what a drive!!! Not for those who fear heights, like me. Once up, it wasn't so bad. Obligatory shot of us at the top: [img:center] 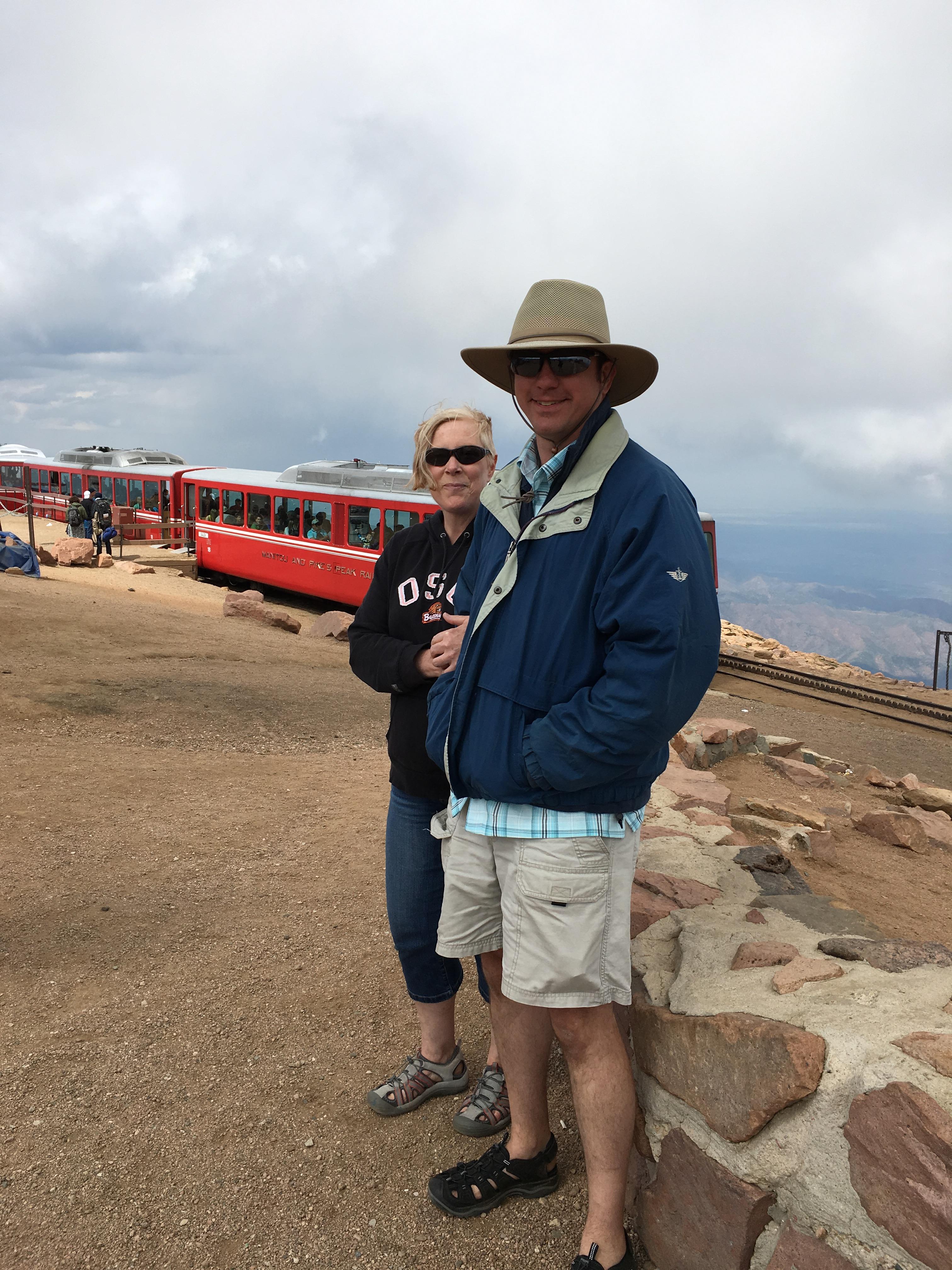 [/img] A shot just north of 10K feet or just above the brake check station (and by the way, the ranger checking my brake temp waved me through- I didn't ride them enough to get over 300*F, their cut off point where they park you for a while): [img:center] 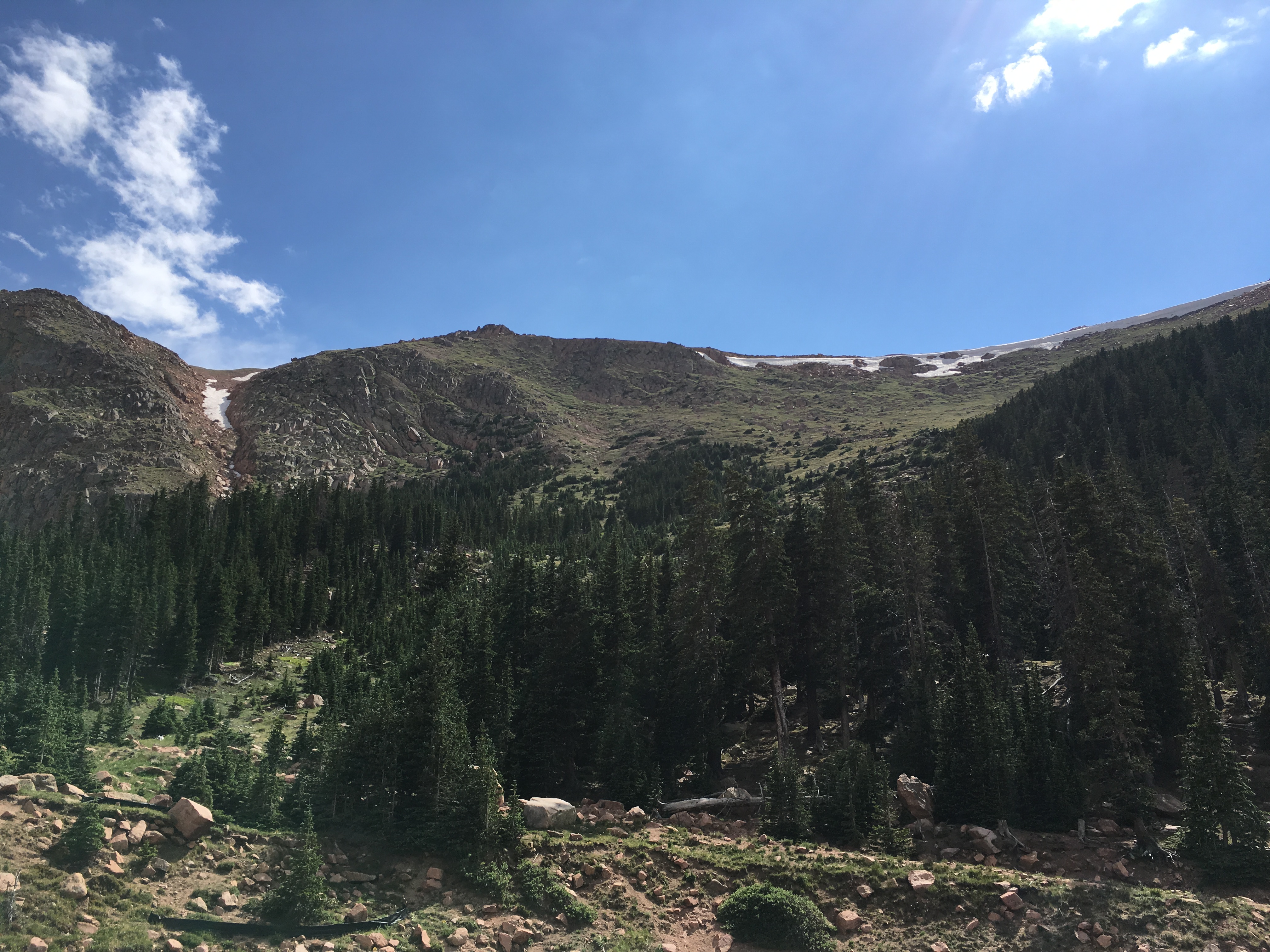 [/img] A rock over looking the road (about the size of a big bus) [img:center] 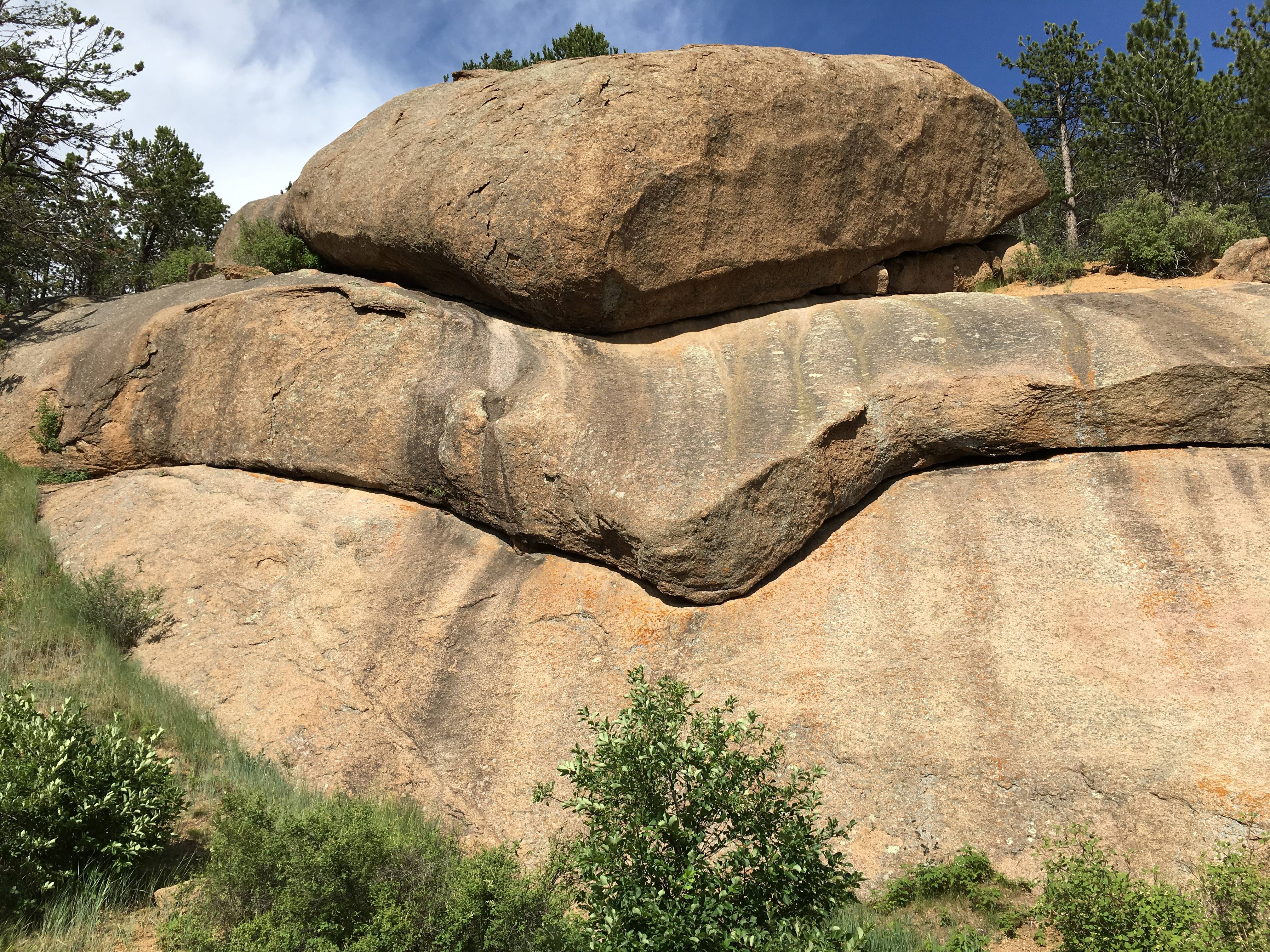 [/img] There are plenty more pics of the Garden of the Gods/Pikes Peak area, but I'd burn up all my bandwidth trying to post them all... That night we met up with my old buddy and his familly from work and had dinner at "The Loop", Mexican joint in Manitou Springs and caught up on old times. Next stop was Tanner's Flat campground outside of Sandy, Utah. I'll admit, I had my doubts as driving through Utah was pretty barren (think Bonneville salt flats and high desert) but once we got into Sandy, the Wasatch Mountains loomed into view and we were in for a treat. It turned out to be an absolutely beautiful little place. We had the lower site (tents) pretty much to ourselves and a wonderful little stream to listen to. This is what we saw when we pulled in: [img:center] 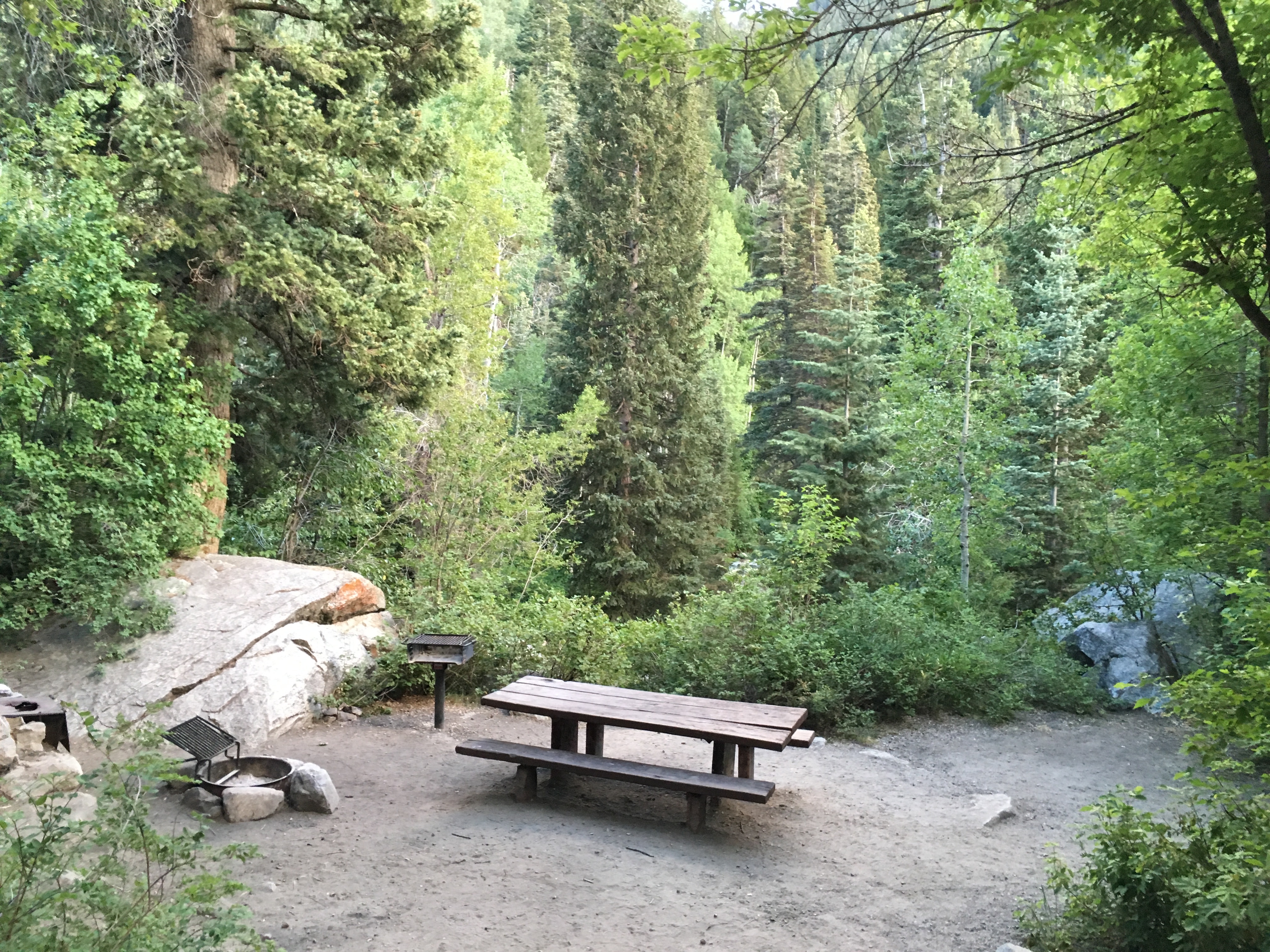 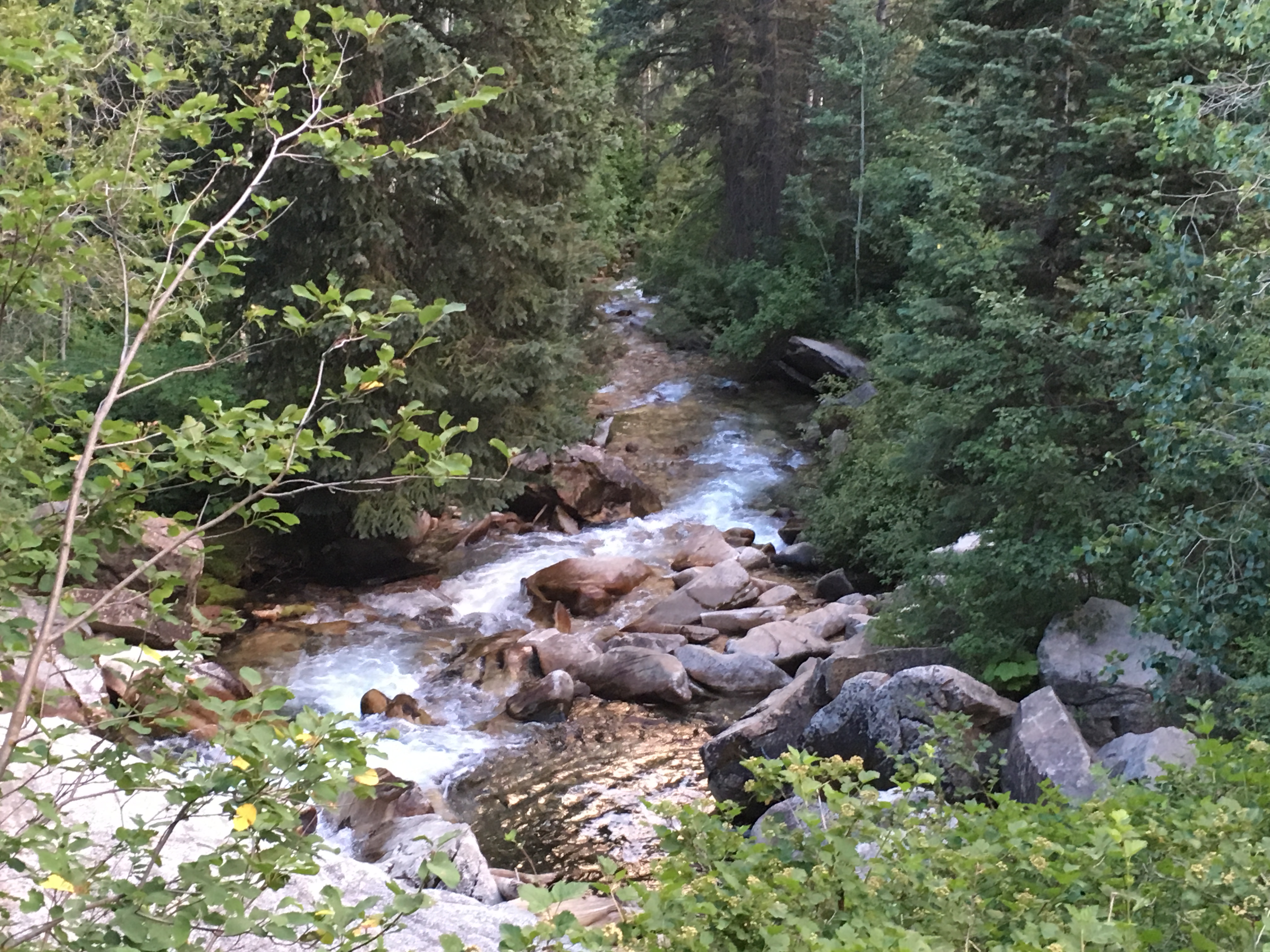 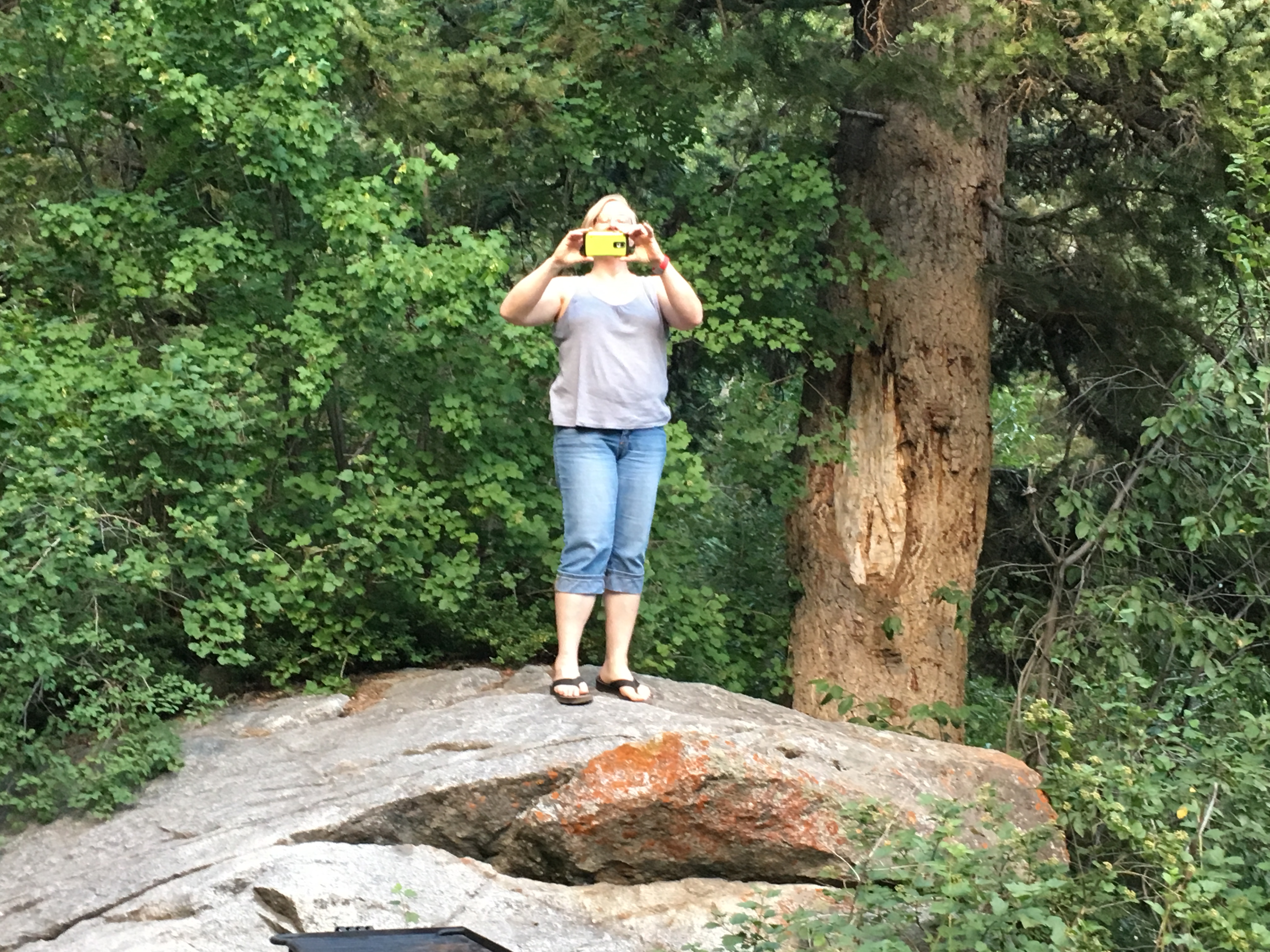 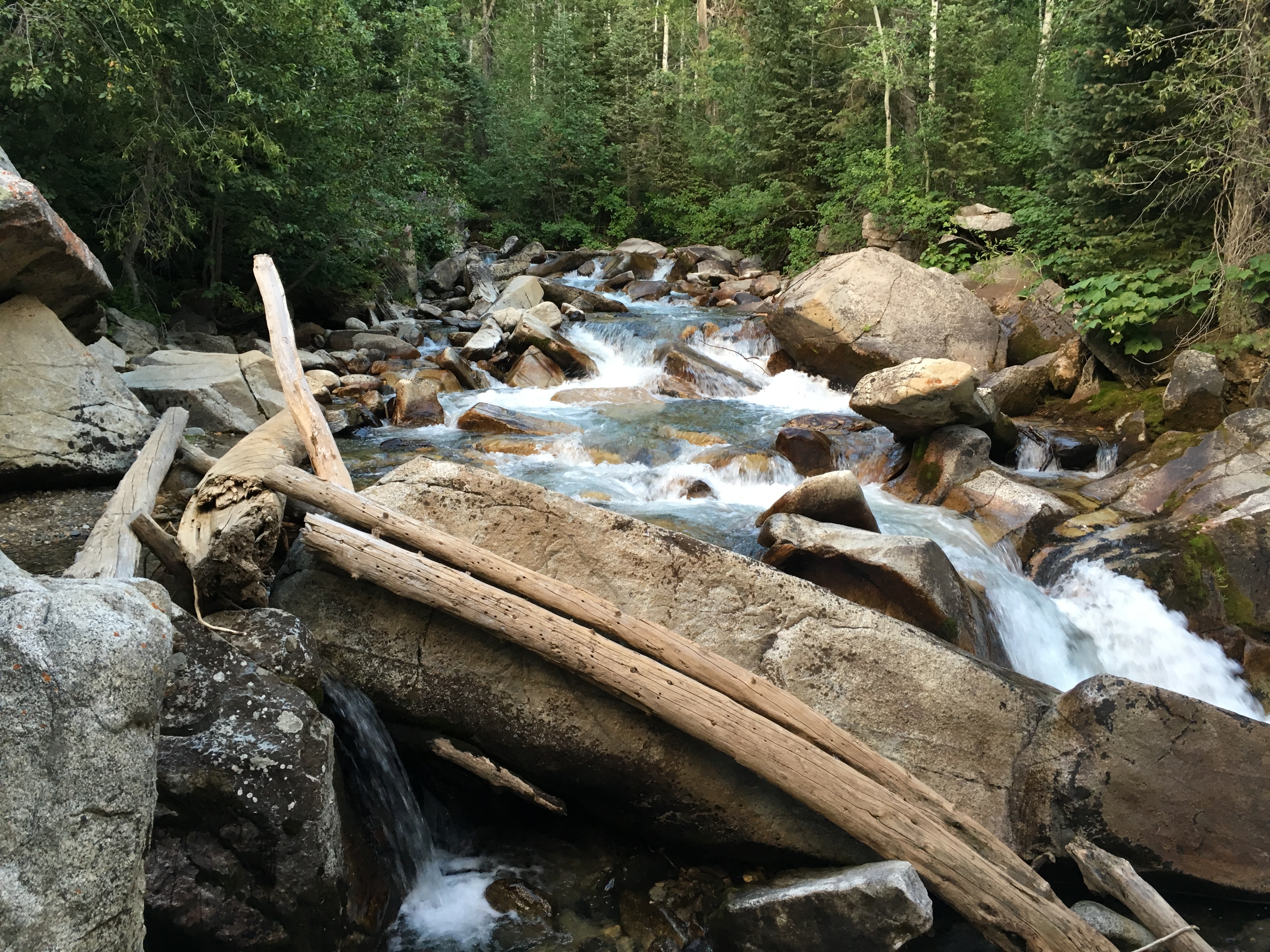 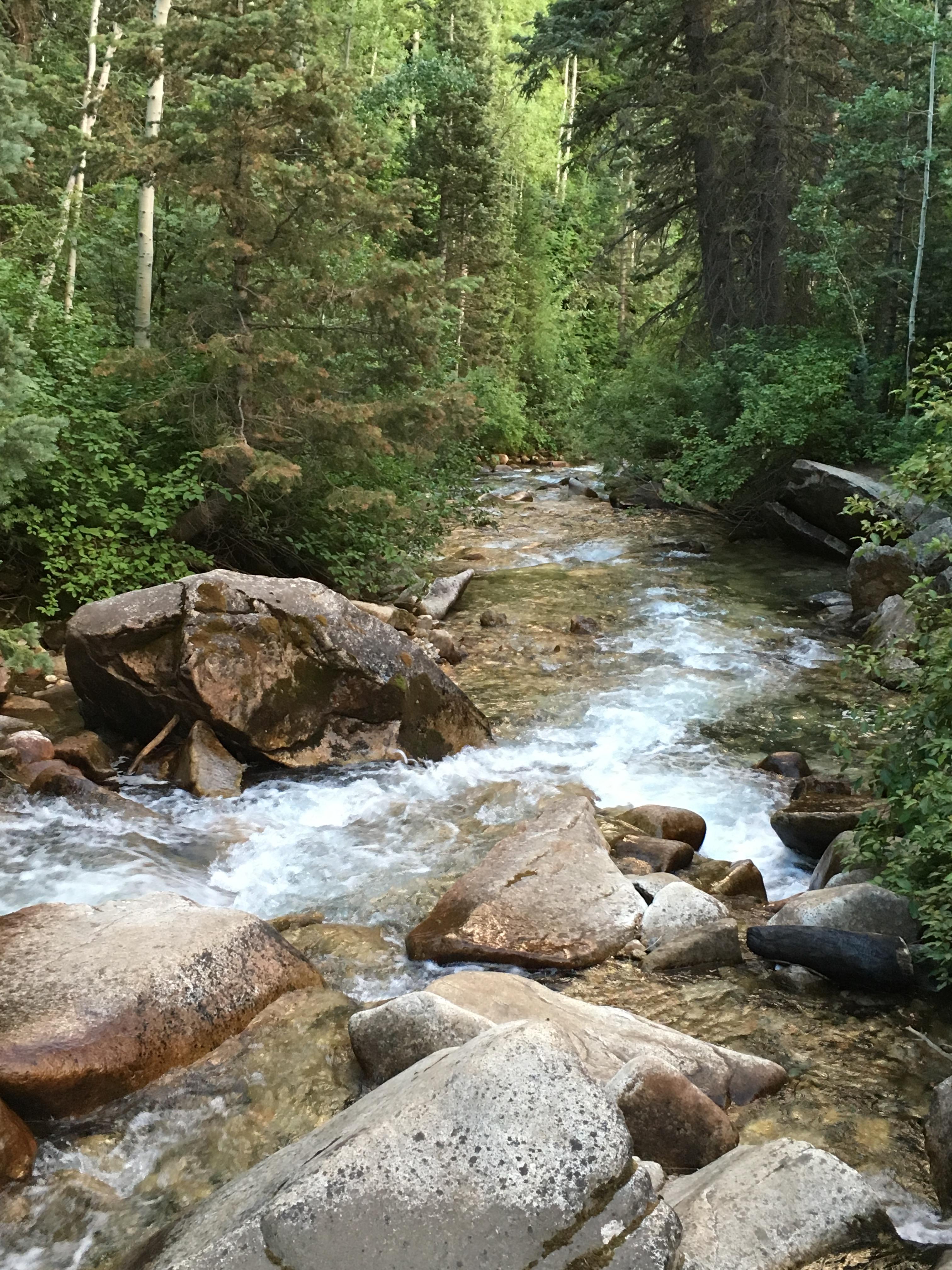 [/img] The light was failing, but we got the tent set up just in time: [img:center] 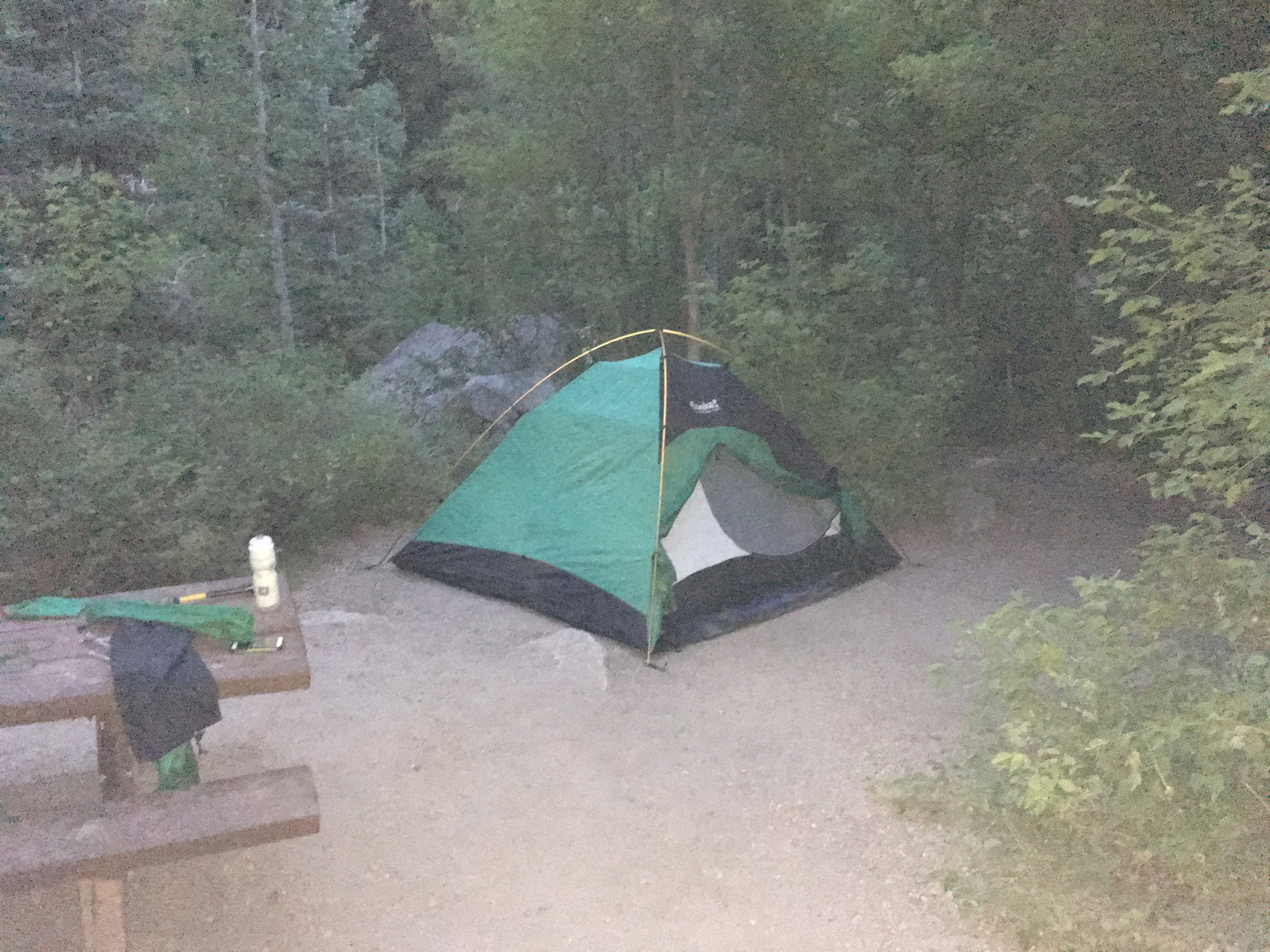 [/img] Next stop was Virgin Valley campground in Nevada. Boy, what a mistake! The website said that it had a natural hot spring and a shower house. What they failed to mention is that it's in the middle of nowhere, surrounded but NOTHING. About a hundred miles before we arrived, I think I saw a road sign that read: "Hopelessness an Desperation- ???" You have to drive for hours- from any any where to reach this place and amazingly, there were other people there! Of course they had the only shade in the whole place staked out, so we had to make due. Things looked up a bit when we bumped into a Canadian couple out on holiday as they call it... John and Bonnie... A very cool couple- we shared a drink and chatted for hours. Here is a view of from a hill above our site: [img:center] 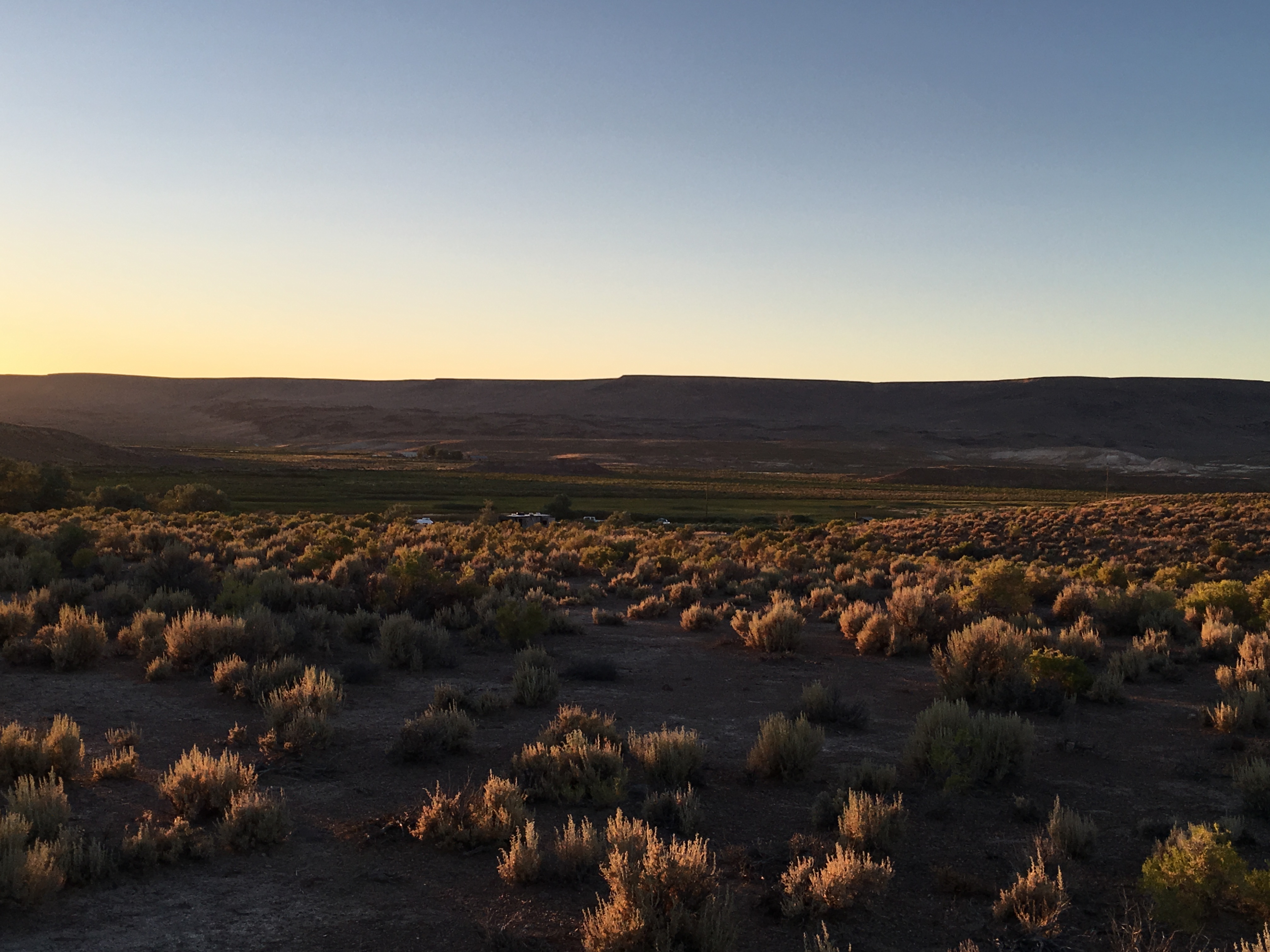 [/img] Here is the campground at about 5:30AM, just before we rolled out: [img:center]

[/img] We headed out and up into the mountains on hwy 140. Just about the Nevada/Oregon line, you descend into the valley... [censored]! You look to your left and see what seems to be a 1/4 mile drop, straight down!!! No guard rails either. Sorry, no pics- I was concentrating on not falling to my death... Lots of driving through Oregon- right by Crater Lake (full and busy) and into Crescent City California. Heading into NorCal was really cool! At a rest stop, a sign read: "Don't feed the bears". Kind of sobering. I tipped a guy playing harmonica and singing... Not too bad really. Headed back on the (twisty, turny) road- and found a little place called Ruby VanDeventer park on the banks of the Smith river. Not too bad really. Maybe a bit unkempt. Our campsite: [img:center] 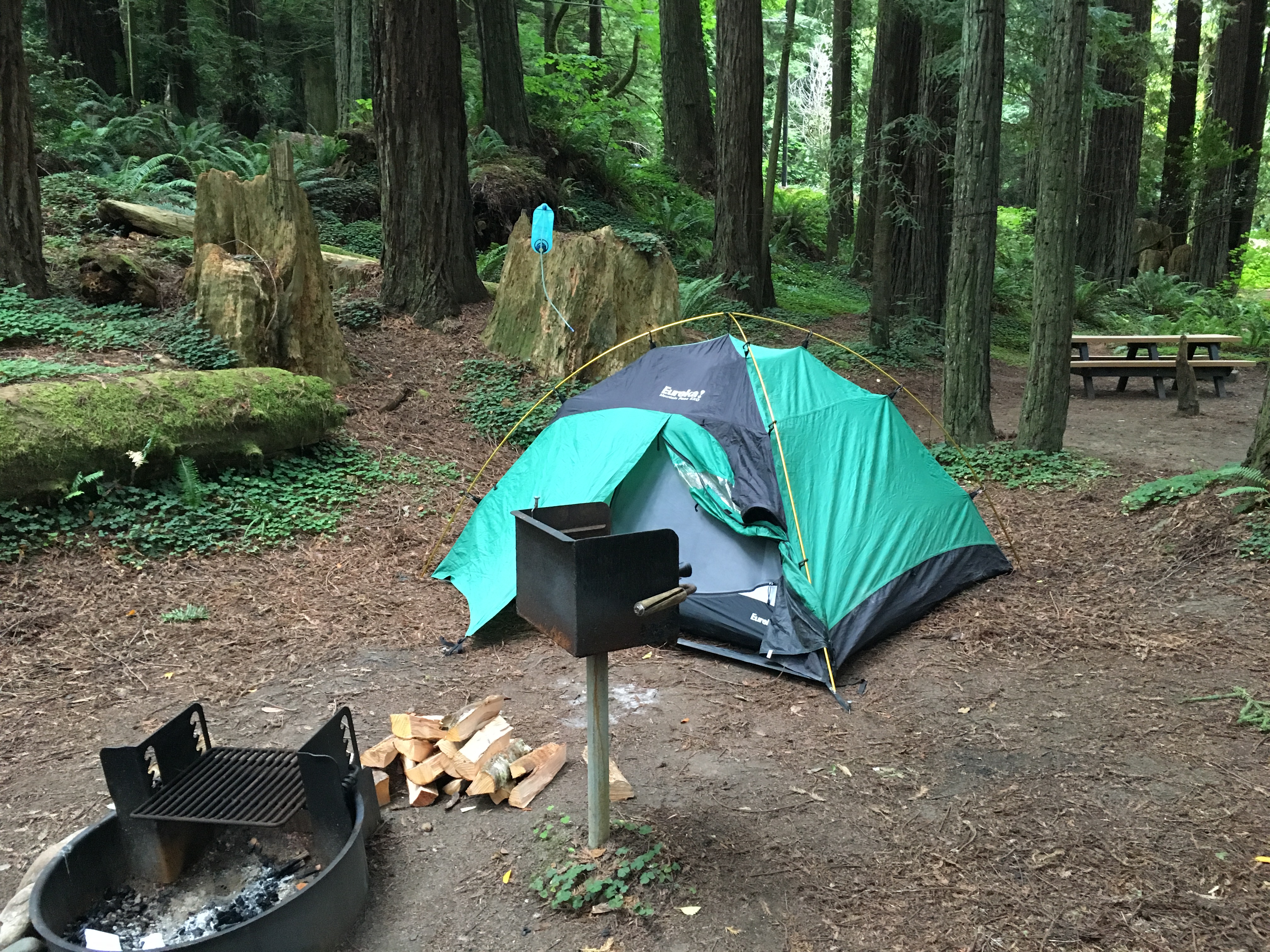 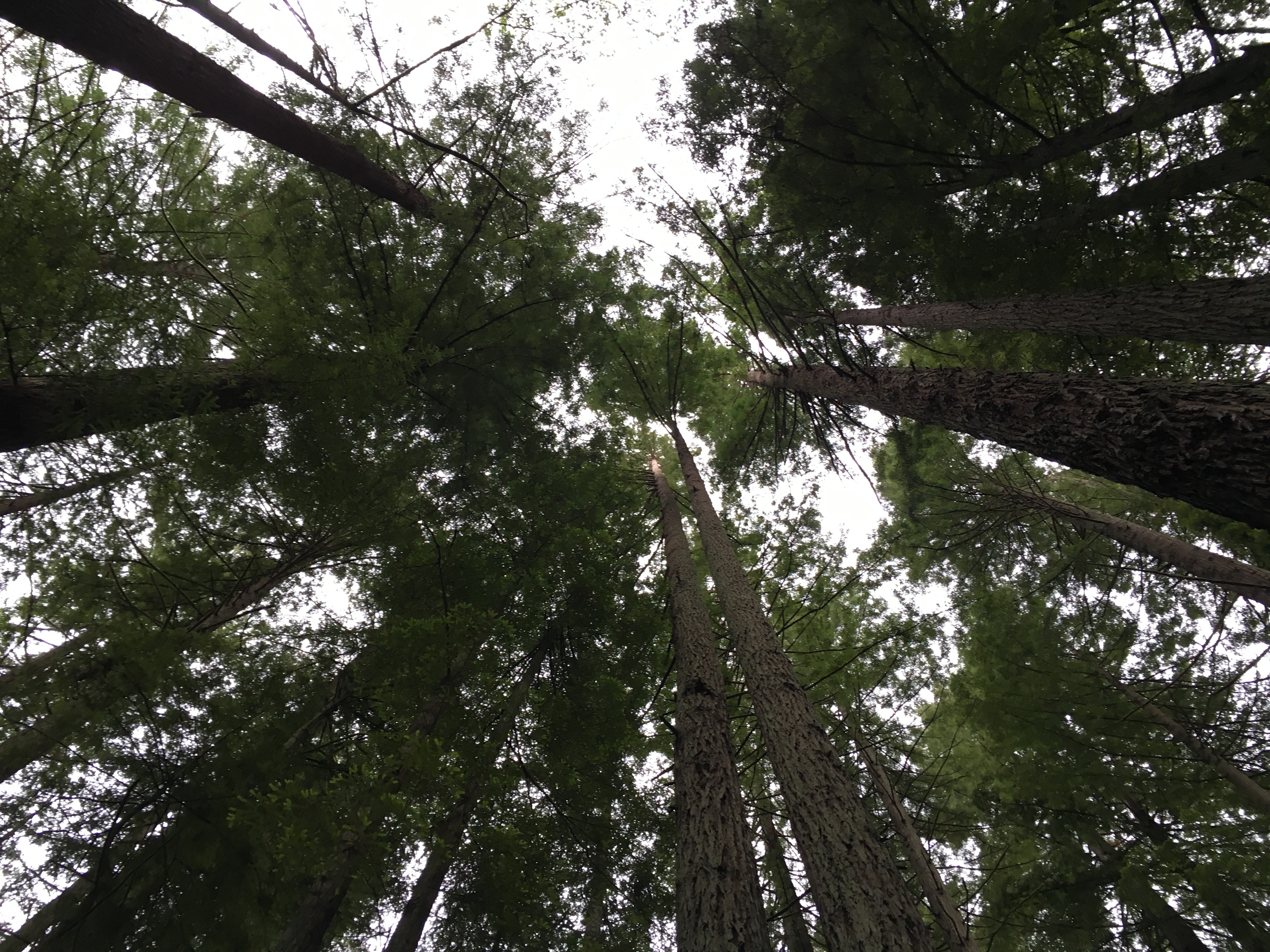 [/img] Next stop- the Oregon coast. We overnighted in Humbug Mountian state park. It was very well kept with a very helpful ranger and camp host. It had the nicest rest room/shower facilities of any of the places we visited, hands down. The place was busy and located right next to Hwy 101, so not really out cup of tea, but hey... it was nice enough. No pics of the site, but we went to the beach at Port Orford: The campsite is nestled in the mountain in the background: [img:center] 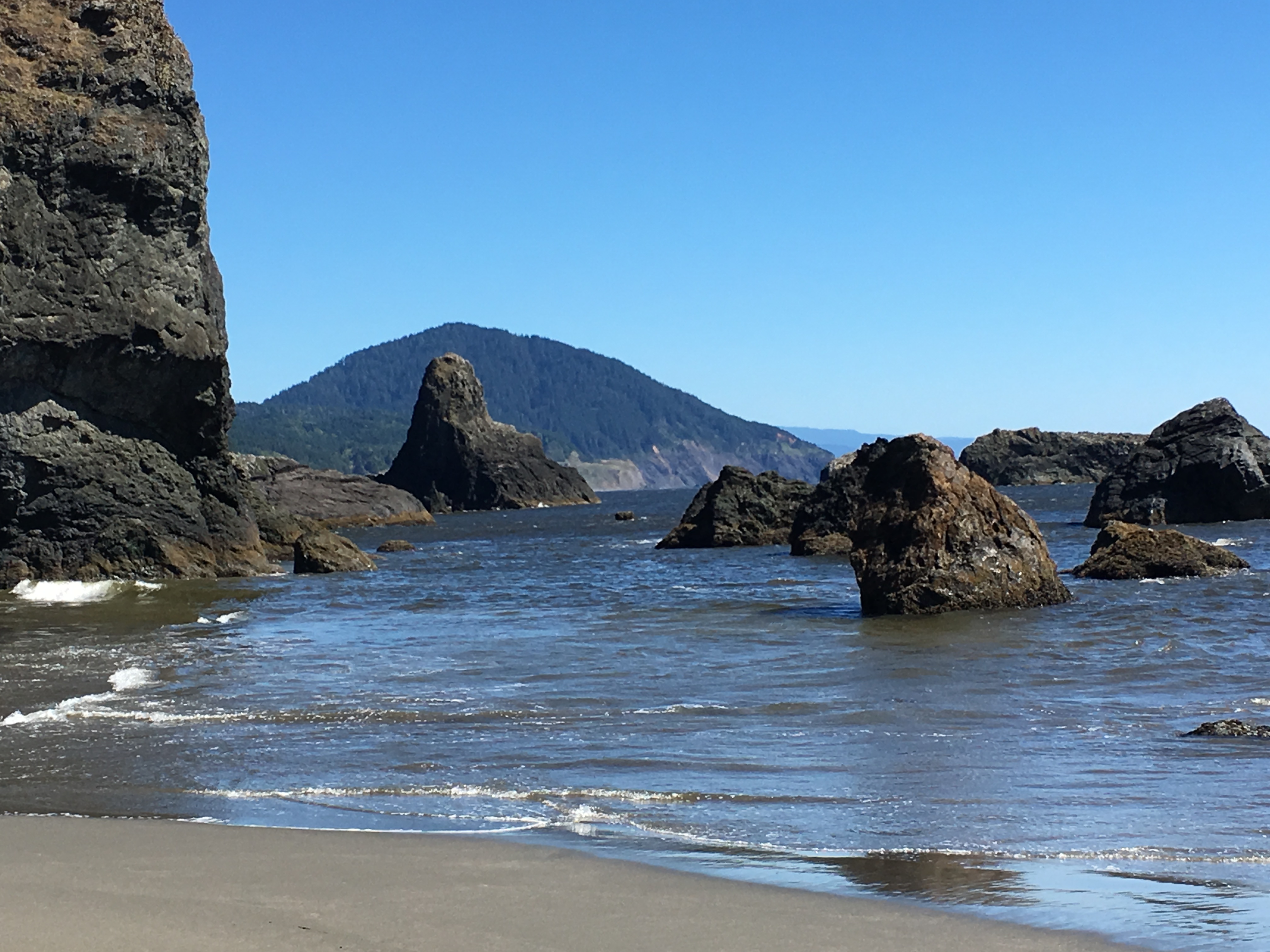 [/img] The next morning we packed up and headed back south to Gold Beach to putz around a little and take in a tour with Jerry's Jet Boats... I'd do it again in half a heartbeat! We took the 84 mile trip up the Rogue River. The scenery was amazing and the pilot was a pretty cool guy. He let me quiz him a bit on the boat and it's power- 3 6.0 Chevy engines @360 HP each. He said they last almost 6000 hours before needing replacement. He claims his last longer than the other pilots' though. Not sure what grade he was using, but I spied a bottle of Valvoline with a red cap tucked away under the wheel. At cruise, they were just a light rumble, but at full zoot, they had a really cool, restrained kind of roar to them! Intoxicating! He did his best to respect the other people who had boats tied up and/or swimmers, so as not to pound them with wake- unless they wanted him to... and they did! We even had some guy trying to bait us (the pilot) with a water cannon... The pilot backed the boat up the shore and gunned it- sending a roost his way! Another couple held up score cards, trying to tease him into some antics. For that one, we were on the return trip and he was trying keep us all dry- so he asked if we minded a little water and of course we all cheered him on... Yeah, he got a 10 from the folks on shore! For being such a big boat at 35ish feet long and 10-12 feet wide, seating about 30 people, he was able to really get with the program! A little swerve and some throttle and he'd shoot right up a riffle with only a few feet to spare on either side... at 30 to 40 MPH! Tons of little things that made this a great trip- I'd recommend it to anyone! Even a food stop for an 1 and 15 minutes- He dropped us off in Agness at Cougars Lane Lodge (you have a choice of 3 places) for some food- great place to eat! Sorry, not much in the way of post-able pics. They were mostly afterthoughts or videos that are kind of boring, but the scenery (clear water, mountains, rock formations), wildlife (eagles, osprey, black tail deer and bears) and history as told by the pilot are hard to beat! So this is where I'm going to stop for now, as I'm out of time for the evening. I'll try to get some more pics up soon though!
Last edited: Aug 16, 2016

Really nice photos. I used to live in Wyoming and we could get to stuff like that in a days drive. It was great. Thank you for sharing.
B

Epic road trip without a REAL camera?? Cell phone cams are pretty good but still.. There has to be more to the cat story.

Awesome trip! Thanks for sharing.

Looks like you had fun! Sorry I missed you!
A

Beautiful pics! Looks like it was a great trip!

A
Completely Blind but his Nose Works Just Fine

The best example of a Standing Lenticular I've photographed

Kincardine, Ontario - BITOG get together