Last spring I put on a transmission temperature sensor on the hot side line going to the factory cooler in the radiator end tank. Very interesting to watch how it behaves. Factory cooler is actually quite good, but does have its limits. 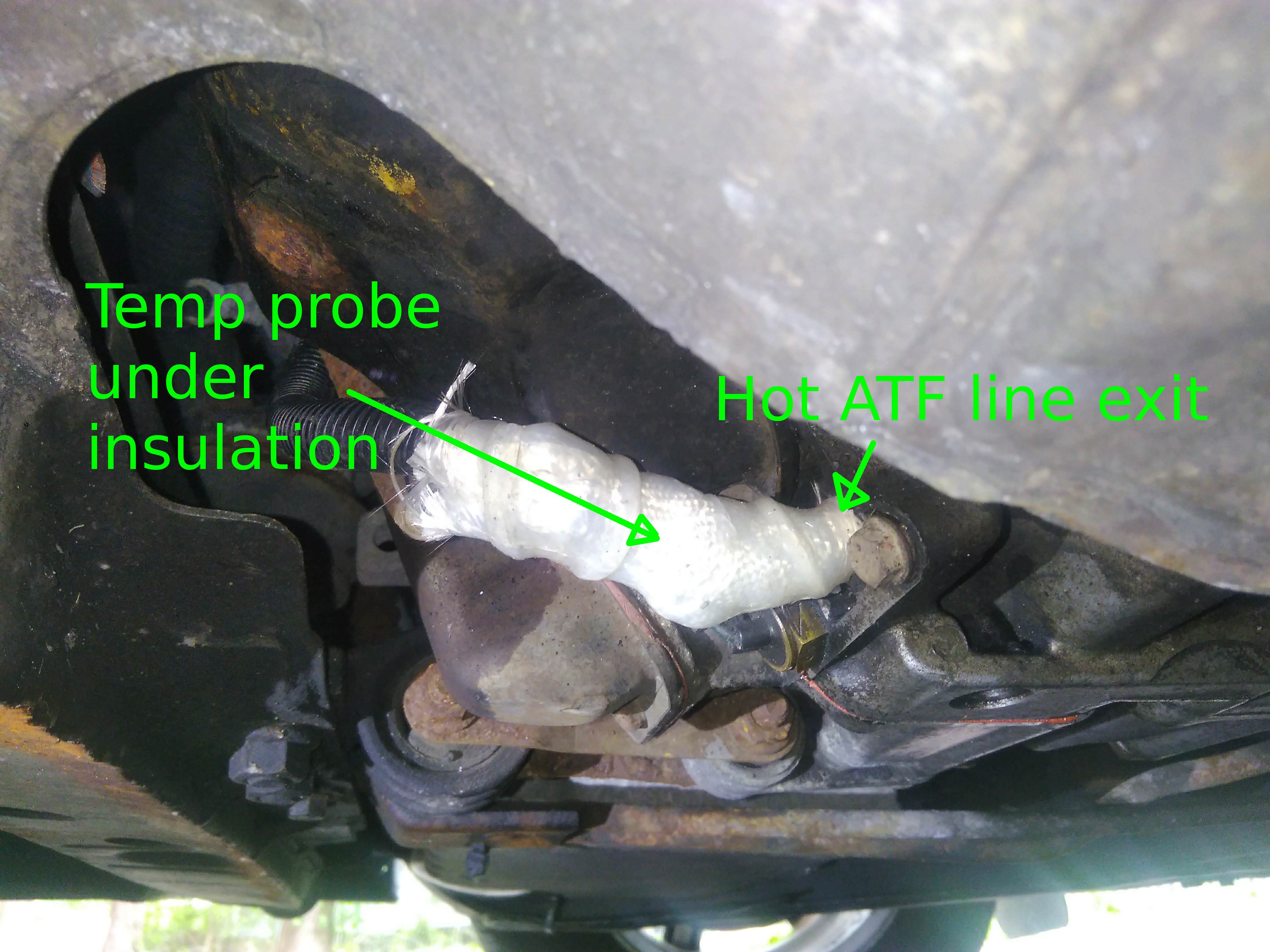 In stop and go traffic with a heavy load or with a small half ton trailer, ATF will rise to around 105 C / 221 F, even on a mild day. Lack of airflow causes coolant in the radiator to heatsoak, which prevents it from extracting as much heat from the ATF. Once the car is moving, coolant temp drops on the radiator exit side and the transmission temp will go back down eventually. The other case where the factory system is overwhelmed is when running at sustained high load in very hot temps. Climbing a grade in the southwest on a 43C / 110 F day I saw the ATF rocket up to 115 C / 240 F in short order with the converter unlocked. Coolant temp only hit a max of 107 C / 224 F, so overall cooling capacity was adequate, but heat transfer from ATF to coolant wasn't enough. Locking the converter in 3rd let the temps fall back down, and I didn't let it get that hot again. I knew I needed a little more cooling, so I added a little Hayden 676 plate and fin cooler in series with the factory cooler. I know part of it is blocked by the bumper, but that was the best place to put it for hose routing and preventing air pockets. 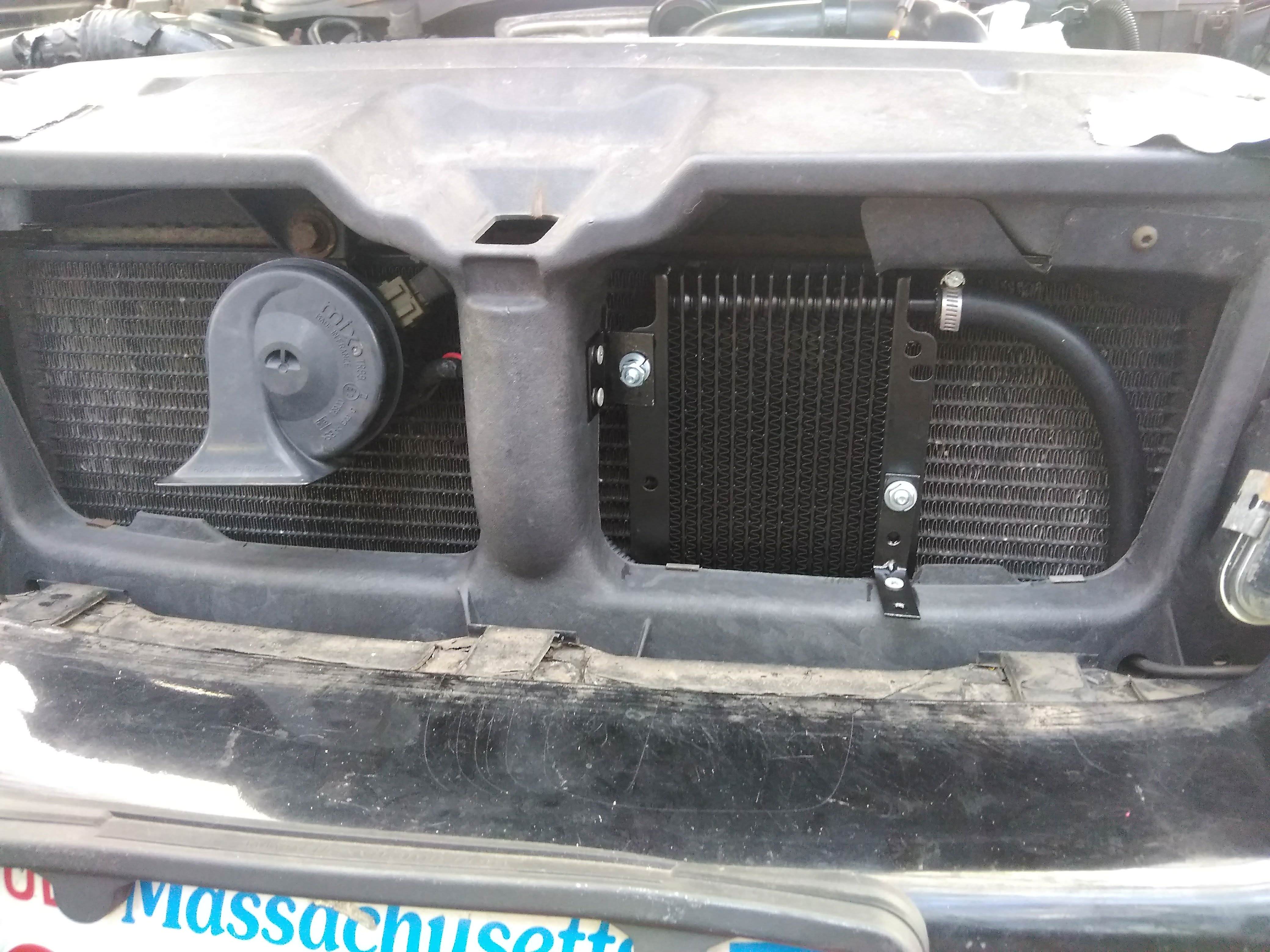 Load varies from "just me" to "stuffed to the gills", and ambient temp ranges from chilly New England winters to blistering desert summers, so I also installed a Derale 13011 Fluid Control Thermostat to bypass the external cooler until the ATF warms up. A few percent flow is allowed to stabilize pressure and help bleed out air. 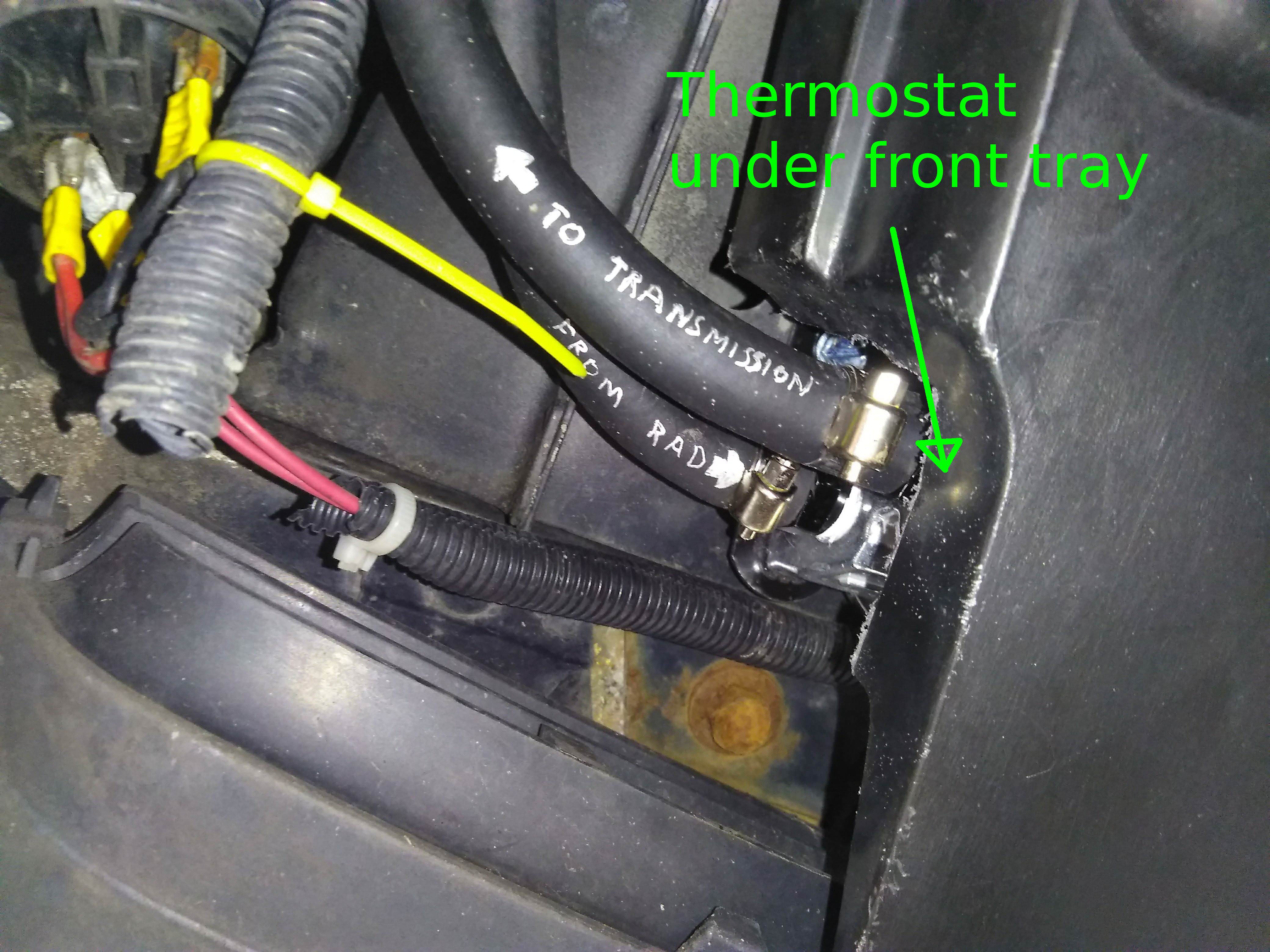 Only had it together a couple days and the difference is huge. System warms up plenty quick as the thermostat bypasses the external cooler, but temp rise slows way down once over 80C as the thermostat begins to open. Since temps would still want to climb when stationary due to heat soak, I set up my custom gauge controller to force the radiator fan to run on low once the temp hits a certain threshold. I'm still playing with the fan setpoint, but at last I feel confident I won't cook my transmission. As part of this upgrade, I also rebuilt the original cooler lines which were starting to leak, replaced all the o-rings, and did a D&F with Valvoline Maxlife. 3.75 qts out, 4.25 qts back in. Fluid looked decent, and I'll be sending in a sample for UOA. These units can go over 300k miles and I'd love to have it last that long. 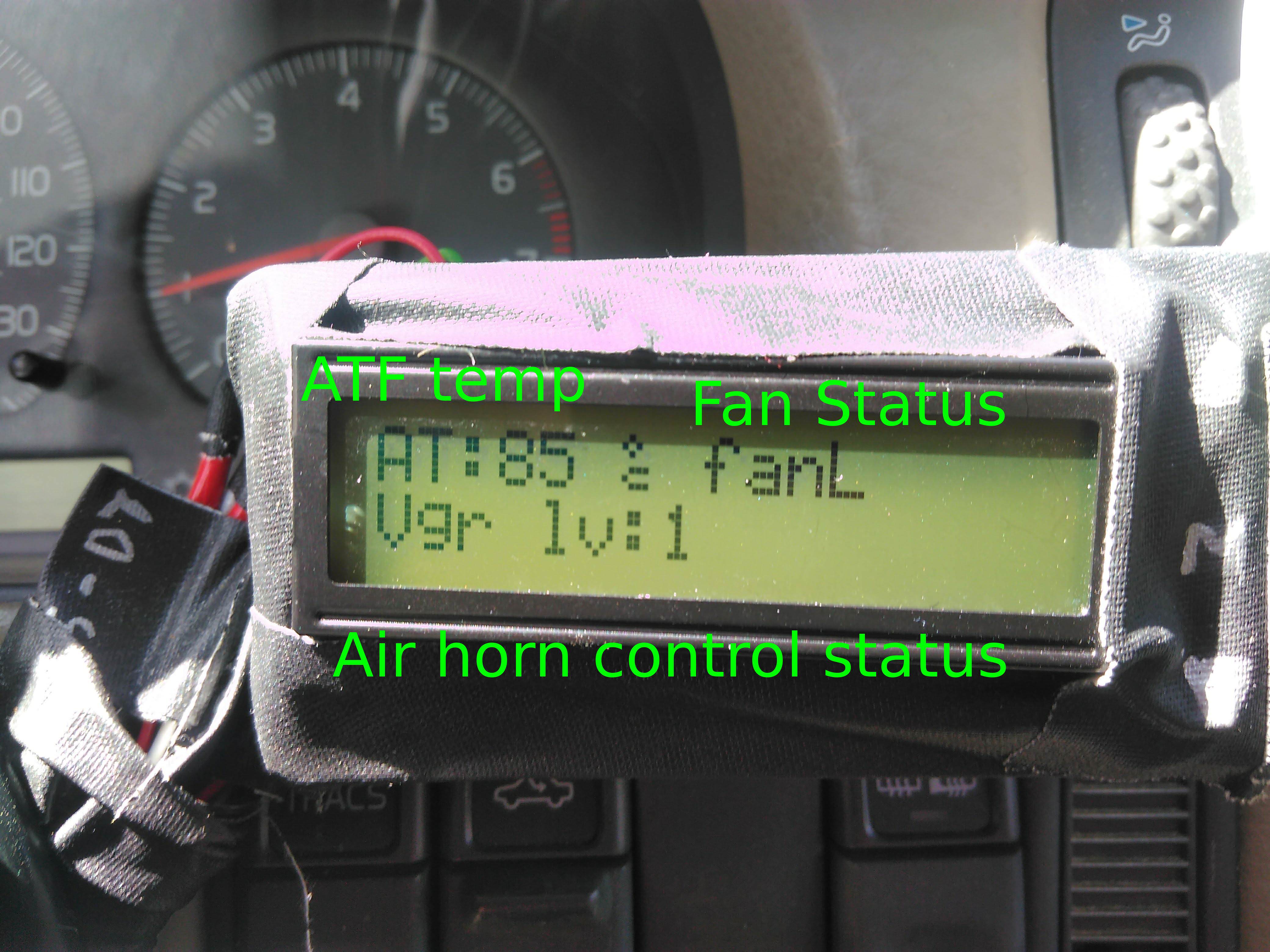 Looks good, the only thing I don't like is the hose clamps, they are leak waiting to happen once the temps drop in winter.
V

Originally Posted By: Trav
Looks good, the only thing I don't like is the hose clamps, they are leak waiting to happen once the temps drop in winter.
What would be better here? Little spring clamps in that size don't have near enough clamping force for my liking. Redoing everything with AN fittings and such is not in the budget.

Honda makes some really heavy duty constant tension spring clamps, I keep a good supply of them just for these. The other good options are Oetiker clamps or large fuel injector clamps. Let me know if you want the part# for the Honda clamp.

Very nice. Can you tell us a bit more about your custom fan controller setup? I have the same setup as you almost with a bypass thermostat and the ATF cooler sitting in front of the radiator/air conditioning fan but I often run AC just to run the fan if I am towing and would rather be able to turn on the fan either automatically or even by a switch without having to turn on the AC
V

Originally Posted By: Spetz
Very nice. Can you tell us a bit more about your custom fan controller setup?
My controller is a little Arduino that I originally set up just to control the time-delay air horn (short honk is regular horn; long honk kicks in air horn). I later added the LCD screen you see in the 3rd pic plus some buttons for menus. I control the fan based on the temperature probe I attached to the transmission cooler hot side line (1st pic). If the temp rises above the setpoint, it turns on a relay wired to the control line of the factory fan relay. When the temp falls 2 degrees C below the setpoint, the fan turns off. This prevents it from hunting and rapidly pulsing the fan as temp jumps between values. Volvo's relay pack makes it really simple to add custom fan control sources. There are 2 inputs: one for low speed, and one for high speed. Pulling an input to ground turns on the fan, with high speed overriding low speed if both inputs are activated. For now I just use the low speed, but plan on having it turn on high speed at a higher temperature in case things are really roasting. When I add an oil temp sensor, that will also be able to force on the fan to keep temps reasonable. Coolant (of course), oil (factory system) , and ATF (what I just added) all have thermostats, so there's little risk of overcooling. You'll need to do a little research or experiments about how your system works, but it should be pretty easy to set up either a fan override switch that runs the fan all the time, or some sort of thermostatic switch. Make sure either of those options are powered by an ignition switched power source so you can't accidentally leave the fan running and drain your battery.
V

Originally Posted By: Trav
Honda makes some really heavy duty constant tension spring clamps, I keep a good supply of them just for these. The other good options are Oetiker clamps or large fuel injector clamps. Let me know if you want the part# for the Honda clamp.
Yes, please. The part # for the Honda clamps would be useful to have.

Honda 90635RV0003 Honda uses them OE for cooler hoses, they never leak its a good sturdy piece, the dealer is usually cheapest. They come open and locked in place till you move it then it closes.
V

Thanks for this! I'm assuming Honda uses standard passenger car 3/8" or 11/32" ID hose for their cooler lines. Otherwise these won't be much use to me.

How to install trans cooler on Honda Odyssey 2006