Why does my boat engine specify 25w-40

Cousineddy said:
Then back to my point…why dont we run 25w-40 in our cars in the summer? Its only at 25 for an instant ya know. You would have your MOFT in your car too.
Click to expand...

You can if you want or you can listen to the recommendation of the engine maker and use a multi viscosity automotive rated oil instead of a marine rated engine oil or instead of a piston aircraft oil. I mean you are talking about a completely different application, vehicle with wheels vs vehicles with no wheels.
B

interesting even thou no boat. reading a lot says oil temperature is VERY important + the environment temp as well as how an engine is pushed matters. no mention or true synthetic base oils as they behave differently, as a 30W PAO functions like a 10-30 WITHOUT viscosity improvers + the higher viscosity the low number the less likely to break down + the oil can be blended using cheeper base oils. as always lots of variables!!

Typically boats are used in warmer weather, they rev high, shear oil and beat the crap out of it. IMO it's a prefect case for risk vs reward for a CAFE vs. warranty claims argument. Thin is not in I guess when it comes to boats.

2005jettatdi said:
Mercury and Volvo buy Chevy blocks and build their own engines with them. It is not a GM engine, only a GM block. So what works in a GM 4.3 engine has nothing to do with what might be appropriate in a Mercury 4.3 engine. I do not run mine hard like many do so I have sometimes use 15w-50 full synthetic. Whether that is a dumb idea or not only time will tell. The engine is only 14 years old. I change the oil once a year since it does not get a lot of hours on it.
Click to expand...

2005jettatdi is wrong when saying "...Mercury and Volvo buy Chevy blocks and build their own engines with them. It is not a GM engine, only a GM block."

WRONG. This is not true, it was NEVER true. The engines arrive fully assembled from General Motors.
Volvo and Mercruiser only 'marinize' the engines using boat specific parts like raw-water pumps and exhaust manifolds, optional closed cooling, etc.

Everything else is identical.

Need pictures? I'm factory trained on both Volvo and Mercruiser...here you go. 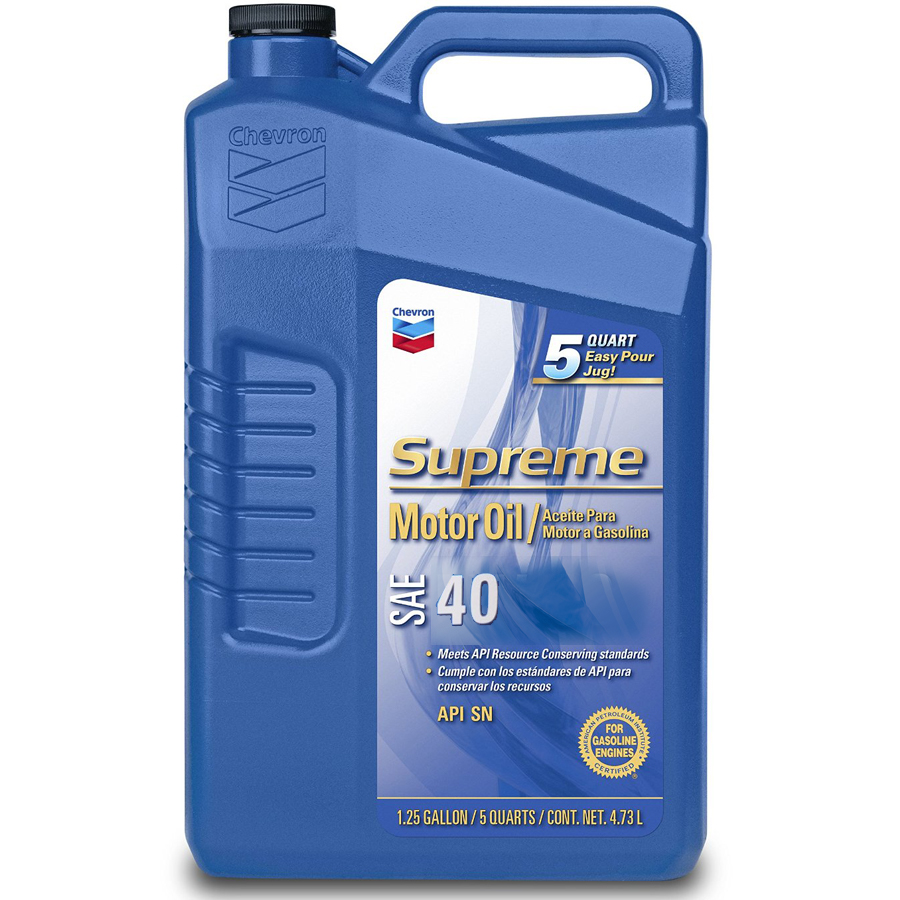 Chevron Supreme SAE 40 Motor Oil can be used in engine applications where an SAE 30 or SAE 40 passenger car motor oil of API SN or any previous S category is recommended. They perform exceptionally well in small four-stroke engines found in lawn mowers, g

Before synthetics were common place Mercruiser oil for their I/O was 25W40 and a blend of two conventional oils and no viscosity modifiers.

Please boats run typically in warm weather and go for hours at constant RPM. So while the block is the same as one made for a truck, the usage is different.
R

Cousineddy said:
So, the logic is that since marine engines are pushed much harder than a car engine, and operated above freezing, it needs a much thicker oil for protection. But, why wouldn’t you run 25w-40 in your car engine, which is basically the same, to give it more protection?. Wouldn’t it last longer if 25w-40 gives you more protection? Isnt it really the oil flow through the journal bearings that provide the separation force? Not necessarily viscosity and pressure? If that is true, why is it better to run a super thick oil. Just because the viscosity breaks down quickly?
Click to expand...

The workload seen by a marine engine (especially in a planing hull) and a car engine are as different as night and day. The first reason you wouldn't use a higher-viscosity oil in your car is because your car doesn't NEED more viscosity. Thicker oil will cause your CAR engine to crank slower in cold temperatures, increase (dramatically) the time it takes for oil under pressure to reach the bearings and valve-train after starting, and reduce gas mileage. Most auto engine wear happens in the first few minutes of driving, while the engine is cold and oil is thick and is not circulating properly yet. This is particularly true in winter. Meanwhile boats and their engines are snug-as-a-bug-in-shrink-wrap.

Moreover...no one jumps in a boat and blasts away from the dock with a cold engine, except for a very small minority of idiots -- and Darwin typically takes care of them in short order, at least in terms of their power-boating careers. So...a boat engine, running in warmer climates and with time to warm up, can afford the luxury of a higher viscosity, thicker oil film. That's a good thing, because most boat engine wear happens when the engine is hot and fully loaded.

Which brings us to your next misconception. The volume of oil flow "through the journal bearings" has nothing to do with the thickness of the oil film under load. Hydrodynamics tells us that a higher viscosity ALWAYS means a thicker oil film under dynamic (impact) pressure loads, like the explosion in a combustion chamber driving a piston rod down against the crankshaft. According to your reasoning, one could use isopropyl alcohol in place of engine oil as long as the flow rate was high enough. This is, of course, nonsense. Under pressure, thicker oil flows more slowly away from the pressure bearing metal surfaces (out of the bearing journals), resulting in a thicker oil film (on average) throughout the dynamic impact loading cycle. An auto engine almost NEVER needs to produce anywhere near it's maximum horsepower over sustained periods of time. A boat engine typically lives it's entire lifetime at or near the maximum torque/hp curve. Under this kind of workload, thicker oil provides a better cushion, which absorbs impacts and prevents metal-to-metal contact that thinner oils would not.

Look up the word 'viscous' if this is not intuitively true for you. Another word that might interest you is 'viscoelasticity'. If that fails, ask yourself this: would you rather dive from an eighteen foot platform into a 3-foot deep pool of water, or a three foot deep pool of molasses? Now you may appreciate the 'dynamics' aspect of 'hydrodynamics'.

Question: when was the last time you were in a car with the pedal mashed to the floor for even 30 seconds, much less five minutes or more?

This is what I mean when I say 'as different as night and day'. Compared to a boat engine, a car engine pretty much sleeps it's life away.
P

alarmguy said:
40 weight oil is not "much thicker" not even close.
40 weight oil in a marine engine will ensure the oil stays at or near the 40 designation and not shear down under the incredible stress and forces that a marine engine is under pushing a vehicle (boat) through water with no wheels that make something easily roll along.
Throw in the high revolutions and incredible stress and heat on the pistons transferred to the oil when the oil is sprayed onto the bottom of the pistons to help cool them down.

Comparing oil for an automobile engine and a marine engine is like comparing apples and oranges, your assuming because the fuel is the same its ok to compare but one of them has wheels that roll on a hard surface, the other is pushing a log through water.

As far as your questions above, think of it this way. Why would you assume a 25/40 gives a car engine more protection?
An automobile engine lasts far longer then a marine engine. We are talking 5000 to 10,000 rough hours, its reall y speed dependant but lets says a truck with 152,000 miles ran 4,620 hours and still going strong, a gas marine engine may last 2000 hours.

This. My 5.8 OMC inboard specified straight 40 weight (Union 76 Racing) oil. Also the operators manual stated that engine should be warmed up before WOT use. That worked out because engine would be warm after passing all the no wake zones right out of the marina.

My 4.3 L mercruiser specifies 25W-40. But, the 4.3L Vortec in a GM car specifies 5W-30. I assume the Marine version has the same crank and bearings. It actually runs a lower coolant operating temperature than a car. So why the big change in the viscosity requirement?
Click to expand...

Marine engines are not governed by CAFE mileage standards. They can utilize whatever weight oil they wish.
R

Dogman said:
Probably so you’re more likely to buy Mercury’s 25w40. Instead of buying another brands 15w40.
Click to expand...

Try to find a straight-up 30W synthetic anywhere except on the Volvo dealer's shelf, you won't.

What? That's not true at all.

The local overpriced marinas act like they are the only game in town but they are far from it.
B

Other than brass freeze plugs & a marine cam, there's no difference between a marine long block & a car/truck one. Boats don't have to worry about CAFE, or starting below 0F, and pretty much run full throttle all day when they get out of the no wake zone. 20W50, even straight 40 or 50 wouldn't be too thick. No cruise control at 2000 RPM in a boat, most won't even stay on plane that low.
L

A factor I don't think yet considered is engine installation application. When Mercruiser, Indmar, Crusader, or Pleasurecraft ship an engine, they don't know what boat it's going in or how it will be operated. They must allow that it's going in a cruiser or workboat that will run at 75 percent of output for 8 hours at a time. So they spec oils that could handle these situations. Common pleasure boating possibly stays below 3000 RPM most of the time. Lots of low speed cruising, some moderate speeds while skiing, and some short high speed full throttle blasts. Possibly this type of use would be better or adequately served by normal off the shelf oils of the 5W or 10W variety.

I think the lack of oil coolers on most boats displays the duty cycle of boat engines. As noted above, with unlimited cooling water, and cool thermostats, they can keep the oil cool enough without accessory oil coolers.
A

Try to find a straight-up 30W synthetic anywhere except on the Volvo dealer's shelf, you won't.

Mercs 25w40 is a straight weight 40 and pump-ability of a 25 winter rated oil.
You must log in or register to reply here.