Who drives a beater?

I have a 1993 Oldsmobile Cutlass Ciera. 3.3 liter v6 with 3 speed auto tranny. Got the car for free and now have just a few bucks over a thousand into it. When I install my new tranny filter and modify the tranny pan for a drain plug I will *finally* be finished with all maintenance on the car. It will be just fluid and filter changes after that. At 113k the motor runs strong and doesn't use any oil and gets an average of 25.75 mpg. Hope to take it on a road trip in a few weeks.
K

My beater that just won't quit. 1990 Toyota Camry 2.0 liter Automatic 195000 miles and going strong. Oils leaking form somewhere, I just add more Driver side CV boot replaced. Front rotors replaced at 180K That's about it. The car just won't quit. Same as the guy above, wife won't get in it, too "Ghetto" for her. That doesn't bother me, born and raised in Detroit, MI. Wife gets the new cars and because I drive the "Ghetto cruiser", I get to have new motorcycles and boats. Fair trade in my eyes. There is no way I would ever sell this car, ever!
S

88 Accord LX, bought on "wheels to work" auction, where they sell the cars that are not fit to redonate to deserving people. $231 + another $100 to transfer title taxes and crap. Change all oils, pair of tires, battery, rear brakes, exhaust, and it's pretty good again. 167k, runs great.

MC5W20...just sold my '90 Cutlass Ciera, same set up as yours. Watch out for ignition module and crank sensor failing. Other than that, it was, by far, the best car I had ever owned up to this point. Got about 28 mpg on the highway. That 3.3 engine was dang good. I sold it with 201K on the odometer. Mechanically it was sound, but everything else around it was falling apart and didn't want to drop a lot of money in it to get it back to prestine condition so I sold it. I should have kept it.
V

Beater you ask? I have an '84 190E 2.3 TMU on the clock, inherited from my aunt back in 8/03. Invested in new Kumho tires(TireRack), new front ATE discs/brake pads/flush, Hella Euro spec W201 H4 headlights(Ebay), Bosch Plat +4s, thick gauge silicone/Beru plug wires(Ebay), some minor engine relays/sensors and interior restoration pcs(Ebay), Redline Waterwetter in coolant sys, 2 Auto-Rx regimens with a reg diet of 87 Chevron Techron and mostly 10W40 Supreme or Delo 15w40s(now does 24-27mpg from a lowly 19mpg average when first got car)... All fluids replaced and are ALWAYS at max levels. But kept the engine(blowby/journal noises), auto tranny(some slippage) and the rest of the drivetrain mechanicals in it's basically "inherited" condition. Nearly 3yrs now in possesion since and this 22yr old German iron never caused me any trouble/broke down on the road..NEVER! Now that's what you call a beater..

My definition of a "beater" is any vehicle used for daily driving while your <i>special vehicle</i> sits safely in the garage. While I don't drive a true beater, many of my own friends & family refer to my Volvo as such.
R

'90 Pontiac Sunbird with 156k miles on it. It doesn't smoke or use oil and still runs like it was new. My wife got the car when she was in college, and I use it as my "beater" now. The interior is getting pretty worn out, but the car looks like new on the outside also.
G

I got ya'll beat on beaters - Beater 1: 1984 Chevy Astro Van - owner number one was Bell South Telephone. Owner number two was a house painter who painted the van light blue, (he told me he used left-over paint and used a roller). He even painted over the side windows. Motor smokes but cranks up every time and runs strong. No muffler - very loud, (my neighbor's love me). Heater runs all the time which is a bear in Florida Summers. Beater 2: 1995 Saturn SC1 - was my daughters first car. She wrecked it. Smashed in the front end and crumpled the hood. I took the hood and front bumper off and replaced it with "custom fit plywood" which I then covered with 5 V crimp roofing tin. Painted it purple. Used some old schdule 40 PVC pipe and made a "brush guard" grill. Runs great but burns some oil, (about 900 miles to the quart). Like the man from the island said so long ago, "I love my new car."
O

You guys/gals have to include pictures

I stuck some pics in a new thread in the photo section.
S

GreeCguy wins. Back in the day, my dad used to have a Chevy Astro that still ran like a champ when he got rid of it (gave it to a friend @ work). We always used it when we were hauling dead trees out of ravines for firewood. One end of the chain around the bumper, the other end around the trunk, and away we went! The oil was changed every 3,000 miles (Iffy Lube) on the dot, but I seriously don't think any other maintenance was EVER done on that truck. When he finally said goodbye to her, there had been a fire somewhere in the dash, so if you turned on the A/C, the whole thing would start to smoke, the steering wheel column had COME OFF, and was being held on by *** knows what (you could rotate the entire column around in a circle), paint peeling everywhere, there was a patch on the top side of the gas tank from when he shot a hole through the tank with a .30-30 (drunk, unloading it in the van, yes, seriously, I was there, I saw it), and damage to the rear axle from when I tried to back it down someone's driveway (drunk) and ran over a railroad tie. That was the van that wouldn't quit! (He drives an Expedition now.)
C

I drive a 92 mitsubishi mirage 132k miles. wrecked in the front passenger side where I got hit. bought 7.5 years ago in 1998 for $3500. Stranded one time due to stuck starter this past winter, but the hammer trick worked. Haven't had any starting problems since (been two months). My wife won't ride in it either says it is ghetto and unreliable for being stranded once. Maybe she's right. Right now I'm battling a rough idle. The older the car gets little problems here and there surface. btw, I thought beaters were cars that people didn't want?
S

We have a 93 Taurus with 199k miles on it, private party value is about $1k per Kelly blue book. That seems like a good criteria for a beater. We have a new set of good Les Schwab tires for it, but the Michelin Alpins on it now are enjoying their last season. More importantly a new coat of Nufinish on it :^) Runs fine except for a hesistation when cold, I suspect a fuel injector as all the sensors seem to check out.
T

1996 Saturn 4banger. I'd love to get a new car, but's it's hard to justify it when 36-38MPG is the norm and it's very reliable. It needs a sunroof rail kit, new headliner, R/F fender (torn), and probably a new muffler real soon. Pic of car: Silver/Gray, 2nd closest Saturn. This was taken at the SaturnFans.com Saturn factory tour last summer: 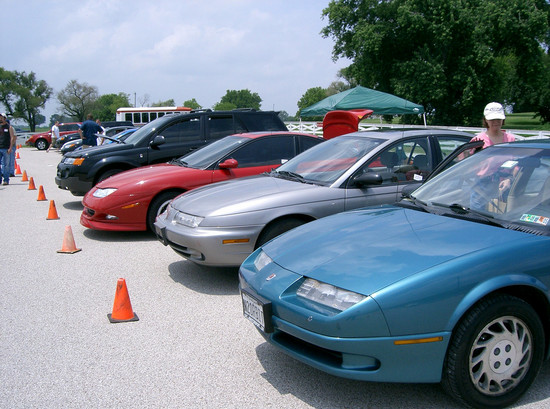 Keep'em coming folks. I got tears running down my face from laughing. GreeC, You got the best story so far. The roofing over the custom plywood hood is gonna be hard to top.
R

94 Taurus GL, former company car paid $500 and it's in wonderful condition. 3.0L Vulcan and the bulletproof AX4N trans over the crap AXOD model most Taurus' get. 128K and going strong.
E

1992 Mazda MPV with 110,000 on it. Had it since new. I have hauled lumber, mulch, you name it, with this thing. I use it during the week to commute and save the Lexus for the weekends.
C

B
When and why did you decide to be done with beater cars?
3 4 5

Thinking about buying a beater car
2 3