AutoMechanic said:
Training new people lol. But I don’t mind it too much. One of them already got his golf cart privileges taken away cause he has a lead foot on the gas lol. At least these guys have tools. I got rid of the other ones. So far done a few batteries in used Subaru. Had a customer car Jeep towed in with no oil in it that our express had done. They cracked the oil filter housing base so had to replace that and then sent it to our detail department for detailing since oil was everywhere. Management asked me they are like we know you hate Mopar and especially hate working on them but can you please do this for us as we are short on Mopar techs and I figured it would be good to show my boys anyway. And now I’m on lunch. And trying to keep these boys off the tool trucks because they have almost bought the whole truck a few times lol. I know I buy stuff but I also know I’m going to be in this long term and I’ve used all of my tools I’ve bought. I made the one return his Lisle oil filter sockets that he paid $90 for I said dude go to the auto parts store and get that set for way cheaper. Or even online. He is thanking me know for that lol.
Click to expand...

Finished the first brake job on my 2004 Focus at 185,000 miles and in the end it didn't really need it. The front pads were at 50% of original thickness and the back shoes even better. However, the front rotor had obvious grooves where one would re-surface but I had Ford rotors in stock so let's go all the way. The rear brakes were fine but I had to snap off one of my lugs because the last guy who installed tires cross threaded one of them. So that meant a new drum, which means two new drums. The new Ford drums come bare so that meant new bearings which I pressed into them. So with that let's go all the way. The only fly in the ointment was the emergency brake where a small part of the internal lever rests on top of a rubber bumper just barely. It slipped off and got stuck against the bumper and prevented the lever from moving. The fly was the day to bring the car in I thought check for a sticky rear right in the Polara first. Found the problem and when I spun the tire to check drag got careless, not paying attention, and got my ring finger on the right hand dragged under the tire and across the asphalt like a cheese shredder. Incredible pain, ugly, freaked out my 13 year old and ended my day after repairing the damage. That forced a one month layoff because the finger couldn't moved much less have anything touch it. Could barely write at all and that is what I need to do in records. Car was finished this past Sunday, the 20th. Finger still healing but hand can be used. Ended up doing front rotors, calipers with brackets, hoses and pads on the F-150. Also had to do a right front wheel bearing, a right front CV axle, and a right front inner tie rod. Customer wanted the oil changed so I did that too. Finished up about an hour ago. Same customer is swapping the F-150 for a 2005 Dodge Ram that needs some maintenance. I'll probably work on it tomorrow.
C

Replaced two hub/bearing assemblies on a 12 Malibu. Freed up, cleaned and lubed a stuck slide pin and changed the oil.

Just chasing down some electrical gremlins on it too before it goes home to its owner.
J

Started by sucking ~3 quarts of oil out of the hydraulic reservoir because someone accidentally added oil to that instead of the engine. A piece of plastic tubing fell off of my suction gun and fell into the tank. Thankfully my wife had bought this kit from Amazon so I stole the grabby drain snake thing to fish the tubing out. Saved me from needing to drain the hydraulics which holds about 2 gallons of 20w-50 IIRC.

Needed to replace the PTO shaft seal. I was worried that getting the PTO clutch off would be a bear but it actually fell off with just a little percussive persuasion. The drive pulley that sits above the PTO wasn't much worse which I probably owe to it being constantly showered in hot oil for the last 2-3 months. Had to drive the key out but it fell right off.

New PTO switch because it wouldn't crank if you shut it down after mowing.
New left foot safety switch because the old one was getting touchy.
New drive belt (third one this year - will probably last longer since it isn't getting contaminated by oil)
New battery
Greased everything

The valve covers had started leaking so I put on a set of the newer style that take the newer gaskets. I should've taken a photo, but the old Kohler Command Pro 23hp is still spotless inside. Runs great too.
G

Repaired the kitchen faucet today. The swivel was really stiff and causing the entire body to move back and forth. Disassembled, cleaned, lubed, then re-assembled. ☑️

Prepping for a call tonight.
I put up a secondary light over the range as the one in the microwave no longer works. Rather than replace a $300 microwave, I purchase3 a $13 LED light, dropped the lower trim plate, drilled two mounting holes and installed a light.
I'll clean up the power cord later. The supplied cord is 5' long and I need about 1/3rd of that give or take. Pardon the mess, the cleaners don't come until Monday
1

I finished up an '06 MINI clutch job on Tuesday, only to jump right in to a 2006 Subaru Baja Turbo timing belt/spark plug job. Anyone that knows Subie's knows that the EJ255 can be a bear to work on, especially when you pull the timing covers and find the cam seals leaking. This particular example had 248K miles on it, and the timing belt was cracked to high heaven. Anyway, she's done and gone.

Next was a 2004 Yukon with 250k rounds, it got a new P/S pump along with the pressure hoses from the pump to the Hydroboost and Hydroboost to steering gear.

I finished today by removing rusted and leaking fuel feed and EVAP hard lines from a Chevy HHR. All the way from the tank/canister to the engine bay. I've got new OE lines waiting to be installed tomorrow.

Once that's done, I've got a rotten 20 year old 3500 Chevy van that needs a steering gear, pitman arm, and LH suspension rebuild after an accident. That should be fun.

Found a rock in the side yard

This is definitely an area shaped by glaciers. And if you live farther south, the added spice of volcanic ash.
bobistheoilguy.com

Replaced a cracked Flexplate in a 2017 Ford Edge 2.0T/6F35. I read the Ford TSB that states to replace the Flexplate, Dowels, Torque Converter, Transmission Front Pump.....Along with inspecting the Crankshaft for damage & replace the Short Block if necessary.

I checked the Pilot on the Converter & it fits good in the Crank. Pump Bushing checks good, Dowels are a little undersized so I replaced those.

The Crank had the damage/wear outlined in the TSB, But I can't see the harm it would cause?

Called a colleague that works on these more than I do, He said put the updated Flexplate & new Dowels In.....He hasn't had one comeback yet.

I didn't put together an estimate for replacing the short block, Trans pump, Torque Converter but it would've been very expensive! 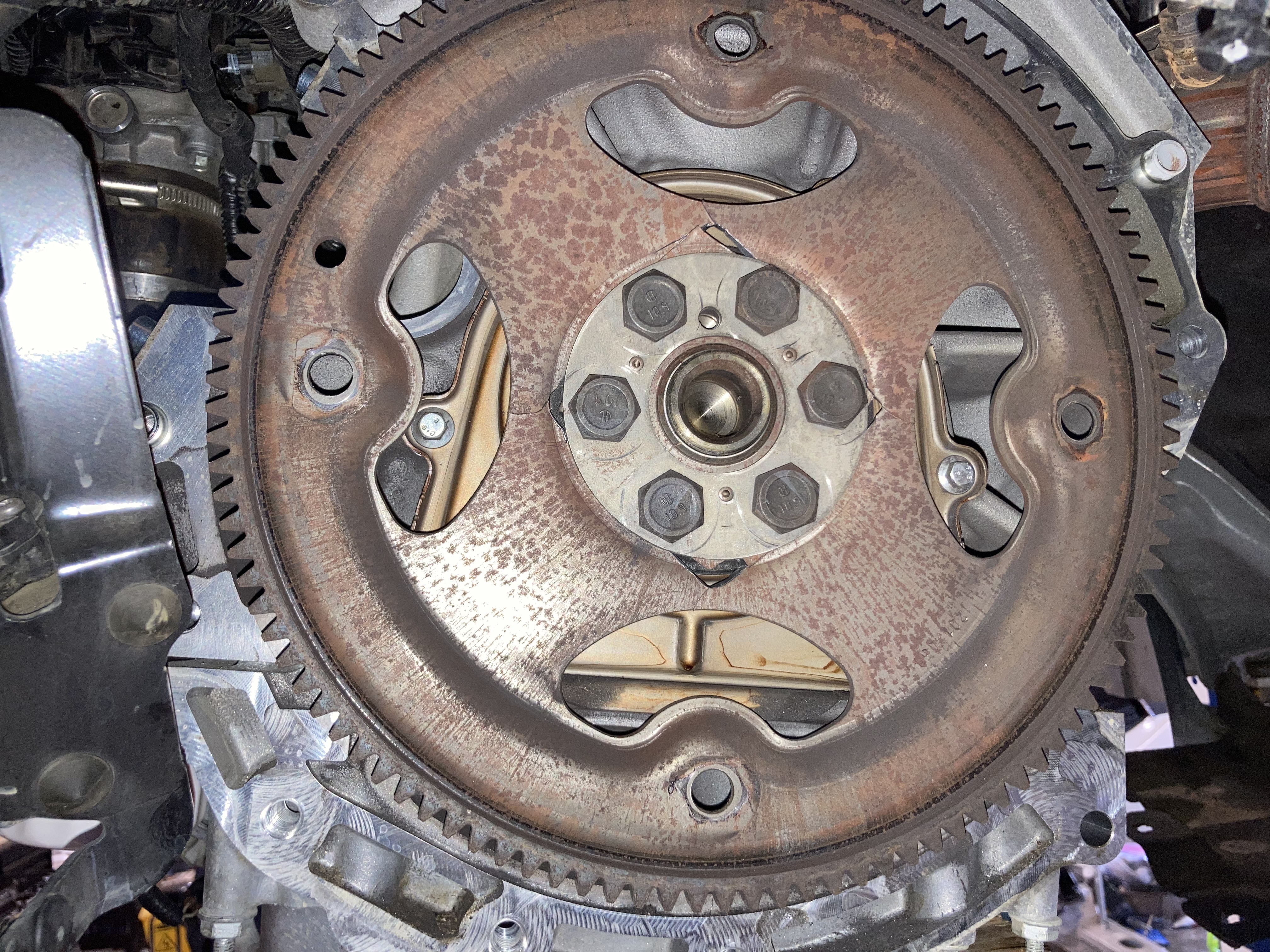 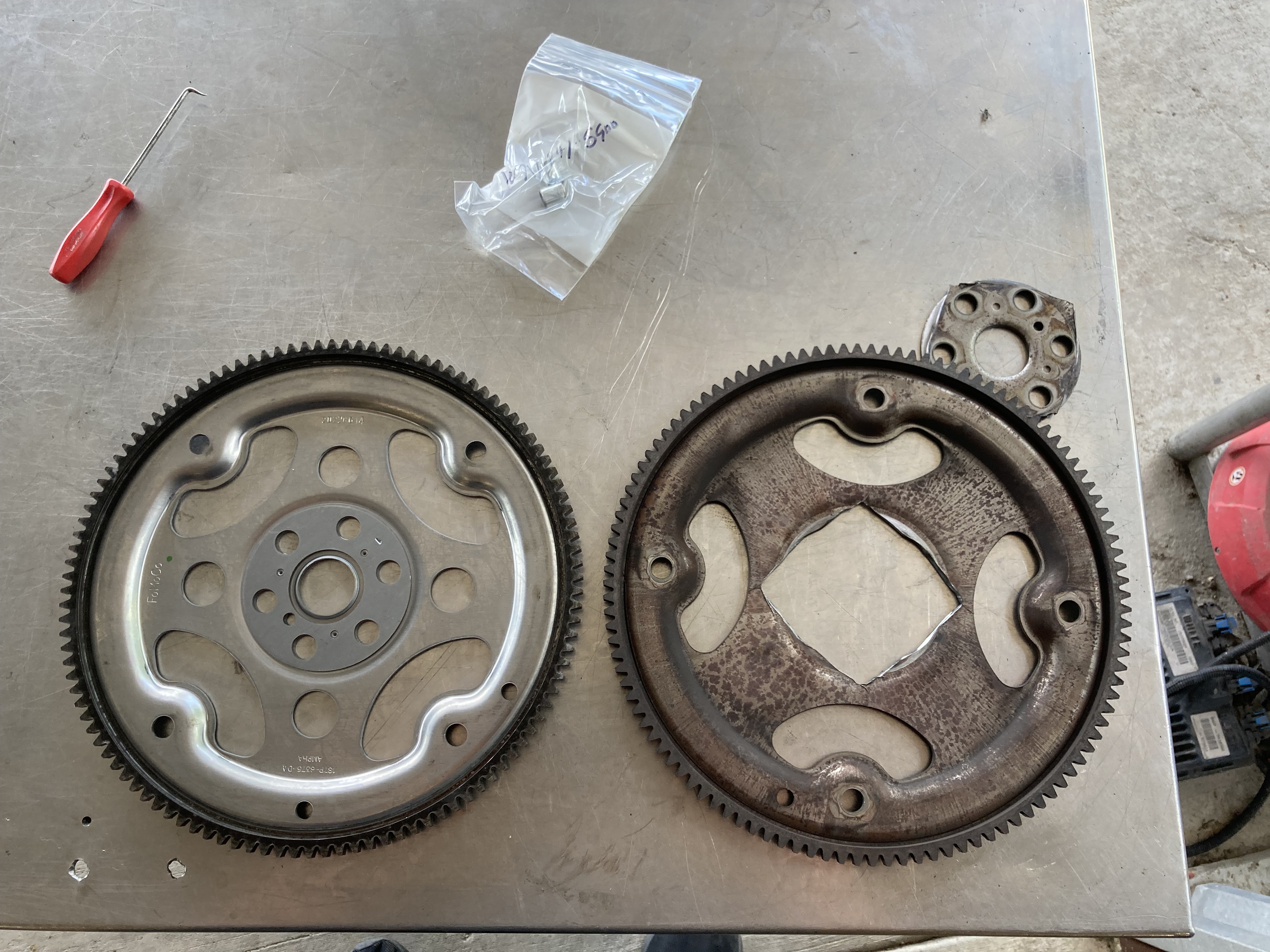 Installed a rear swaybar on the 2001 Toyota Tundra after it being backordered for months, only to find out I've installed it upside down. Most rear swaybars I've work with are flat or have pronounced bends to determine its orientation but it didn't get mentioned in the instructions or on the bar itself. It has a slight upward curve in the center of the bar to clear the parking brake cable if the axle is being fully articulated and I did not find out until I dug into a decade old tundra forum post.

I'll deal with it on Saturday.

Diagnosed a '12 Chevy Express with no fuel pump response. The pump had just been changed -- albeit with an AutoZone unit -- 400 miles ago

Despite coming from AutoZone I was suspect of the pump being bad. After some initial checks I finally installed one of the manual bypass relays and left the key on. Verified power at both sides of the 30A fuse and then started manipulating the plug at the pump connector on top of tank. Voila! Pump roared to life.

The customer declined further diag reasoning they know what to mess with if it happens again. They were younger guys on some sort of missionary trip so life is an adventure I guess
K

The 2005 Dodge Ram
Turned front rotors, replaced front pads, left front wheel bearing, both outer tie rods. Went ahead and changed the oil. I've replaced all the spark plugs, 6 coil boots, and the air filter, but I'm waiting on two new coils which I won't have until tomorrow. I'll stick them on and it'll be on its way. Also have a 2003 Chevrolet Avalanche to replace the knock sensors on. I went ahead and pulled the intake but I won't have the sensors until tomorrow.
K

Got the Ram done this morning. Finished up the avalanche about an hour ago. Ram is gone, Avalanche won't be picked up until Monday. Think I'm gonna put some hamburgers on the grill in awhile and then find something to watch on YouTube. Installed a Hellwig 7700 rear swaybar the other day to find out I've installed it the wrong way. Went down again and flipped to its correct orientation today. Now the center part is supposed to sit level with the arms raised towards the end. A huge improvement to this truck since it squashes excessive sway in turns and keeps the body roll in control, something that's inherent to this truck with the weak front swaybar and soft rear leafsprings. AutoMechanic said:
we know you hate Mopar
Click to expand...

Reading your post, these five words really stuck out to me. I used to think that you were alright. 😒
.
.
Hate Mopar, what’s wrong with you?
.
.
Oh well, we can’t all be perfect.

HemiBenny said:
Reading your post, these five words really stuck out to me. I used to think that you were alright. 😒
.
.
Hate Mopar, what’s wrong with you?
.
.
Oh well, we can’t all be perfect.

Hey we can all admit some of there stuff is ok like the Dodge Challenger but some of their designs make me angry lol like their lug bolt things or whatever they are called. I just don’t want to work on them lol 😂. And those Jeep Renegades that take 0W-30 oil that have the dipstick made onto the fill cap and have a very heavy metal plate underneath you have to take off for service. I’ll stick to working on Subaru lol.
You must log in or register to reply here.